The Charlotte City Council's Transportation and Planning Committee met for their September meeting, where they discussed the City's new visioning process to develop a Comprehensive Plan, improvements to make streets safer for pedestrians and cyclists, and the e-scooter program. 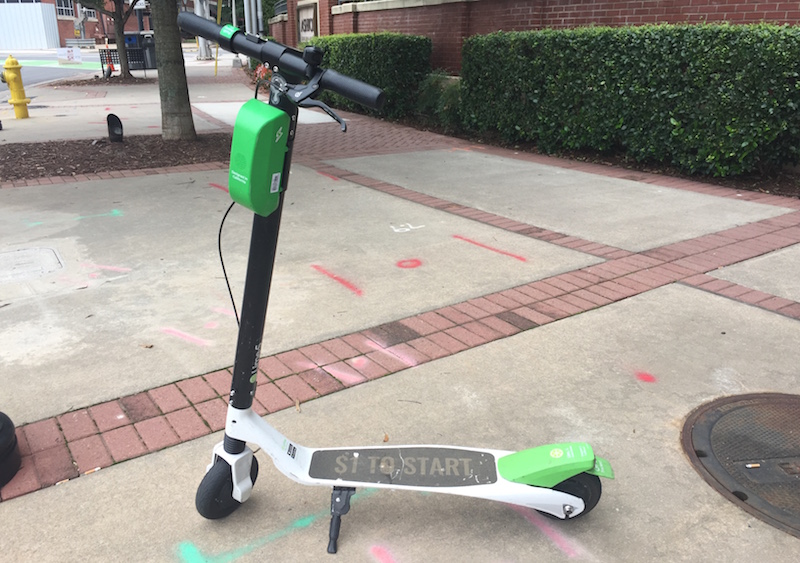 Update on the Comprehensive Plan

Garrett Johnson, Planning Department, shared that the City selected MIG Consulting for their Comprehensive Plan consultants.  MIG will be charged with creating a scope of work, schedule, budget, and a preliminary engagement plan in the next few weeks.

Charlotte uses three primary tools when calming traffic in neighborhood streets; speed limit reductions, multi-way stops, and speed humps.  Check out our previous blog post from an earlier TAP meeting here.  The policy around how these elements are requested or implemented has not been updated since 2006.  There have been 3,000 requests for traffic calming tools city-wide since the update with over half of those requests being for speed humps.

Kathy Dennis, Charlotte Department of Transportation (CDOT), gave the TAP committee an overview of the current implementation techniques and their proposed changes.  Dennis explained that these changes align with Charlotte’s Vision Zero policy and the Transportation Action Plan while equitably satisfying a demonstrated public demand in neighborhoods all around Charlotte.

CDOT is recommending a city-wide change to 25 mph posted speed on local residential streets.  They will also lower the threshold for the number of cars traveling through an intersection daily to justify a multiway stop and start paying for the speed humps again. 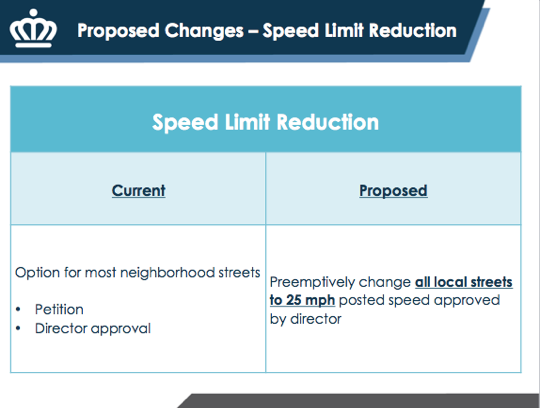 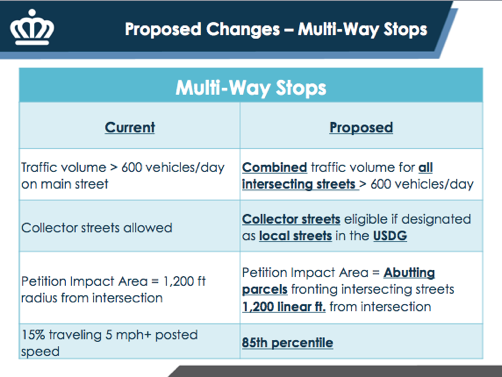 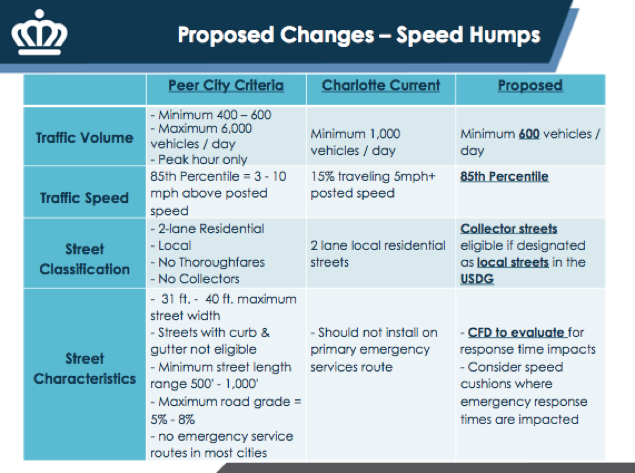 Council Member Larken Egleston expressed concern about changing traffic patterns and the cost of rolling out all three of these new measures at the same time.  Dennis explained that reducing speeds is the first and foremost tool. After preemptively lowering neighborhood street speeds, multiway stops and speed humps will then be used if additional intervention is needed.

Council Member Braxton Winston said that he would like to see more artistic solutions being applied to the street around the city to alert drivers of pedestrians and cyclists.  “It takes one car to destroy a family,” he said.

We are happy to say that placemaking is one of our main focuses at Sustain Charlotte. In fact, Kate Cavazza, our Bicycle Program Manager, heads up the Pilot Program during Open Streets 704.  She has coordinated two street murals that you can participate in on S. Bruns and on Grandin Street!  Also mark your calendars for October 14th and Biketoberfest presented by the Charlotte Knights!  We are partnering with CDOT for a pilot protected bike lane demonstration project on 6th Street that will be programmed with art as a traffic calming feature.  (Are you an artist and want to help? Volunteer to help build the project here!)

Gallagher said that scooters are important to our city because they offer transportation choices and expand the City’s definition of shared mobility.  They offer solutions to the first and last mile gap that most Charlotteans face between transit stops and their final destination.

Over 140,000 scooter trips were made in the month of August when there were only 800 scooters in the city.  Think about that. Each scooter that you see on Charlotte streets is being ridden on average of 6 times a day, hopefully replacing a car trip with the average ride being 1.4 miles long. 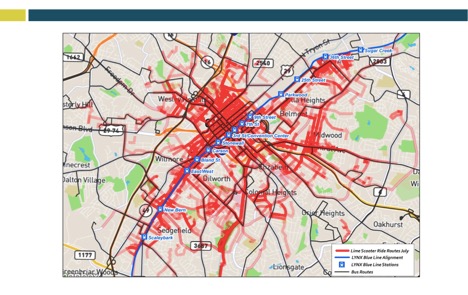 A heat map of scooter traffic. 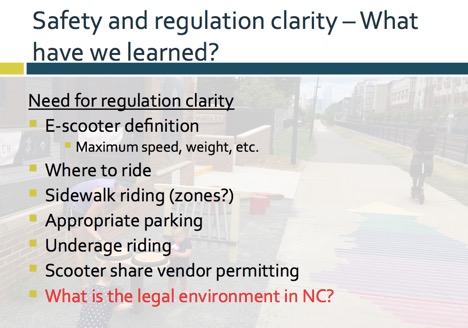 Even though the pilot period has come to an end, CDOT has some work to do to define regulation clarity.  They have identified a few things on which the City can improve upon to enhance scooter rider safety listed in the slide above.

Mayor Pro Tem Julie Eiselt floated the idea of forming a stakeholder group to define Charlotte’s regulations before the state legislature gets involved.

Winston wants to keep City Council away from regulating scooters as much as possible, or “we will strangle ourselves” with rules.  He went on to say that if there are safety issues around scooters, we need to create infrastructure for an environment that makes sense to ride scooters and bicycles in Charlotte’s streets.

We completely agree with Dan Gallagher and Council Member Winston.  Scooters offer many Charlotteans an alternative mode of transportation.  Scooters are more popular than anyone could have predicted in our City. After some tweaks happen to increase safety, we are confident that scooters are complementary to our current mode shares and are a welcomed addition!