Sustain Charlotte weighs in on UDO at public hearing 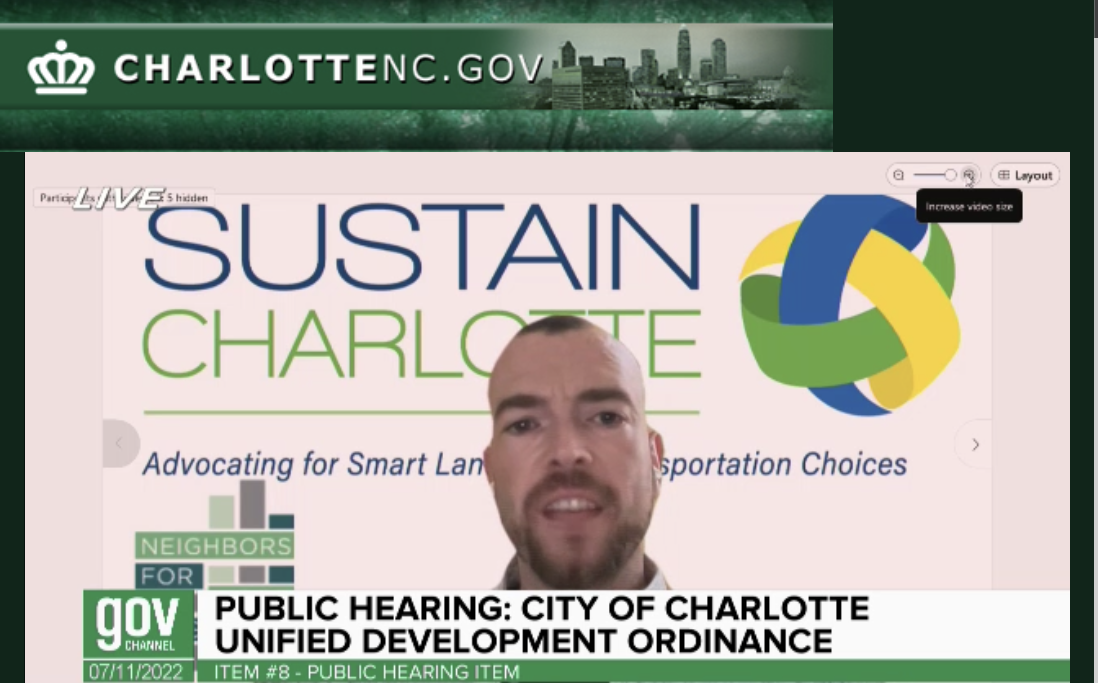 Last night, Charlotte City Council held a public hearing on the second draft of the Unified Development Ordinance, a set of regulations designed to set the groundwork for planned development in our community in alignment with the vision of the Charlotte Future 2040 Comprehensive Plan and other adopted city policies. Sustain Charlotte's urban design specialist, Eric Zaverl, addressed council members to support some aspects of the ordinance while asking for changes to others.

Following are the comments Eric submitted during the public hearing.

My name is Eric Zaverl, and I am sharing Sustain Charlotte's feedback on the current UDO draft.

Since 2017, I have served on the Ordinance Advisory Committee, working first on the updated Transit-Oriented Development Ordinance update and then on the UDO itself.

We have submitted over two dozen comments on the UDO since last year. Most of those comments dealt with supporting the heritage tree protections, reducing parking requirements, and general improvements to zoning using smart growth principles.

City staff attempted to incorporate some of our recommendations regarding parking into the second draft, but given the negative feedback and general hesitation from your work sessions, they never made it. We are disappointed to see Charlotte move backward by requiring more parking in this draft than we currently require in our most recent TOD ordinance adopted in 2019, especially around our transit stations. We know that reducing parking is crucial to how successful any city is at becoming more livable, a place designed for people, and without the crushing demand for cars everywhere—all that space devoted and wasted to driving and parking them.

If the parking regulations are improved, the UDO will be better positioned to help advance the goals in the 2040 Comprehensive Plan.

Therefore, we urge you to support the changes to the parking regulations staff proposed for this draft; additionally, we ask you to keep protections for heritage trees, including safeguards to prevent loopholes and to restore some of the building design standards from the first draft.

If our recommended changes to the parking regulations are incorporated in the final draft, we will support this ordinance and urge you to do the same.

Strong leadership is needed from you to tackle the necessary work to seriously move us beyond a car-dependent city.

The UDO has the potential to be much better than what we have today by replacing an outdated zoning code with a new framework — a framework that is based more on the building form and less on the use or density per acre, providing more building diversity, mix of uses within the building, and higher design standards throughout the city.

Perfect this document is not, but it is a step in the right direction toward achieving our climate, affordable housing, economic mobility, and equity goals.

Thank you for this opportunity, and we hope you continue to work with us on making Charlotte a more livable city for current and future generations.

Click here to watch a replay of the meeting, which includes an introduction to the UDO by Mayor Pro Tem Julie Eiselt, an overview of its creation by Interim Director of Planning Alyson Craig, and comments by other members of the public.

(Here's an overview of what changed between the first and second drafts of the UDO and Sustain Charlotte's position on the latest.)

We're going to share a few comments made during the public hearing last night.

Steve Yaffe was thankful that the new UDO draft's definition of "pedestrian" included people with disabilities who require assistive devices. Yaffe also said: "I also appreciate the emphasis on affordable housing in sections 16.1 and 16.4, but let’s make a connection. Affordable housing should be accessible. Incorporating the principles of universal design into new construction, that’s not a significant added cost — certainly could be more than made up with reduced parking minimums."

Julie Porter, president of DreamKey Partners, was supportive of the plan, although she said the organization had some concerns over development costs that she hoped can be worked out in the future. A few key sentences from Porter's comments: "This plan removes the historical zoning regulations that so often have forced affordable housing out of high-opportunity areas. It replaces those zoning codes with meaningful and thoughtful development regulations that we believe will enable us to build in more locations by right. The UDO will also lead to more density and units of housing. Charlotte is desperately short of overall housing inventory, which has driven prices up and out of reach for many renters as well as first-time homebuyers who might qualify for (DreamKey’s House Charlotte program). There’s been speculation on whether this plan will help affordable housing development. One thing I would point out is that the zoning codes we have now have not stopped the development of high-end homes. Our current neighborhoods are gentrifying day by day, with a new house replacing an older one on just about every block of the northwest side of our city. To not have a plan means the same contentious rezonings for affordable rental housing and the same unequal outcomes."

Laura Belcher, president and CEO of Habitat for Humanity of the Charlotte Region, called the UDO comprehensive and inclusive and noted an affordable housing development allowance in the second draft that would help Habitat install amenities without driving up costs for Habitat homebuyers. “This begins to address equity in public places for these developments, allowing teachers, office workers, retail clerks, and other hardworking families an opportunity to purchase affordable housing that is attractive and safe for their communities," Belcher said.

Sam Smith Jr. with the Neighbors for More Neighbors Coalition asked council members to support the UDO. "The current zoning laws are outdated and would not keep up with the growth rate of Charlotte in the future. They do not conform to strategic growth mapping that will sustain Charlotte neighborhoods and equitable prosperity for families. And the status quo has given Charlotte hyper-segregation by race and income, unequally dolled out amenities and benefits for disinvested working-class families," Smith said.

Jasmine Wright and John Comer with the Redress Movement called on City Council members to remember Brooklyn, the once-thriving Black community in uptown Charlotte that was razed in the name of "urban renewal" and to not let history repeat itself. "The Redress Movement believes in multifamily housing," Comer said. "The Redress Movement believes in mixed-income housing because that allows more opportunity for people to thrive in this society. But I want to ask you to lean into this... The Brooklyn people, as well as the generations that followed behind them, are still reeling from their communities being bulldozed."

Jimmy Vasiliou with the Housing Justice Coalition and the Charlotte Community Benefits Coalition also called on City Council to avoid gentrification. "We ask that the city look for solutions that are driven by communities that want investment in their communities without displacement," Vasiliou said. "We ask that staff incorporate some of the work being formed in the Community Benefits Task Force within the UDO."

Phillip Gusman called the UDO the "correct step forward" for Charlotte. "It would give our city the tools to preserve, grow, and adapt like we’ve never had; simpler and clearer ways to help meet the needs of our community instead of relying on negotiating rezones that seldom bring the promised benefits to our community; the ability and tools needed in order for communities to organize, and participate in the development surrounding them; more trees protected and replaced; more protections for these communities that can’t or haven’t been able to organize in the past; and most importantly, the encouragement of more diversity of housing that can lead to more diverse communities and neighbors who can stay in our city instead of having to move to meet their housing needs.

What's next for Charlotte's UDO

Following last night's public forum, on July 14, city staff will issue a summary of recommended changes to the UDO for the planning committee of the Charlotte-Mecklenburg Planning Commission's consideration and for public view. These changes will be redlined and are based on feedback received since the second draft was released, including public comments at last night's meeting.

The planning committee is scheduled to make a recommendation on the UDO at its meeting on July 19.

A third draft of the UDO, called the adoption draft, will be released on August 15.

City staff will request adoption of the UDO, proposed ordinance, and repeal of parts of the city code at City Council's August 22 meeting.