It has been a while since we wrote about the Unified Development Ordinance (UDO, not to be confused with UFO), a 600-plus page document that the city of Charlotte has been working on for almost a year. On June 3, the city released a new draft of the UDO following the public comment period from earlier this year.

On Monday, July 11, Charlotte City Council will hold a public hearing on the second draft. Here’s what you need to know about what changed — and how you can still weigh in.

What is Charlotte’s Unified Development Ordinance?

The UDO is an ensemble of several updated ordinances (including rules that deal with zoning, trees, and floodplains, among other topics) put together into one document to make the planning process more transparent and straightforward. The new ordinance will be a legally enforceable component (with a limited scope within state law) of the Charlotte Future 2040 Comprehensive Plan, which the city adopted last year. Sustain Charlotte has participated in the planning process since 2017 by joining the Ordinance Advisory Committee.

The first draft of the UDO was released last fall. During that initial release, we covered aspects of the UDO we believed to be important and in need of highlighting. Three topic areas included neighborhoods, transportation, and the environment. After the city staff received feedback on the first draft, they released an updated version of the ordinance in June.

For those of you who might be attempting to read the whole thing, we have bad news: It is almost 700 pages now! But, no worries; we have prepared a brief summary of the changes that have been made to the new draft. 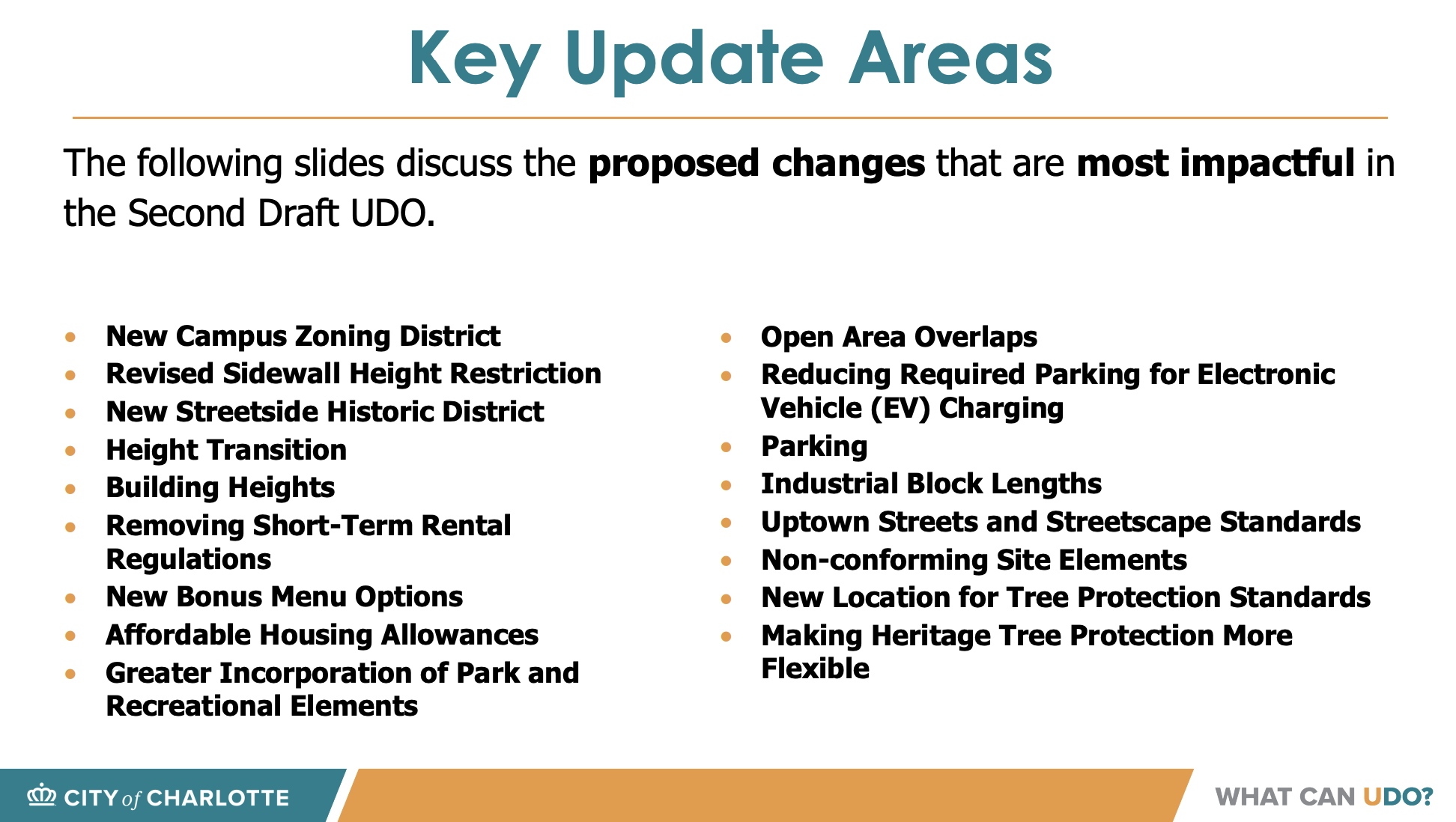 How does the new Charlotte UDO draft impact heritage trees?

City staff has separated heritage tree protection standards into two areas; situations where new development is happening (these are found inside the UDO) and cases when very little or nothing new is being developed on-site (for example, your backyard).

Backyard scenario: Removal of heritage trees (trees of biological, cultural, ecological or historical interest because of its age, size or condition) will be allowed in all cases; however, the homeowner would still need to have a permit, will have to pay a mitigation fee of $500, and would have to plant a new tree. Each additional tree planted reduces the fee by $250. The regulations for the non-development scenario are not included in the UDO document. Instead, they can be found in the tree manual — a document that will be adopted in the same process as the UDO.

Land development scenario: Something that changed in the new draft is the increased mitigation fee for tree removal from $1,000 to $1,500 on sites where development is occurring (i.e., not existing residential yards). The increased costs will help enhance Charlotte’s tree canopy and might help provide some relief to the recent loss of a quarter of a million trees. 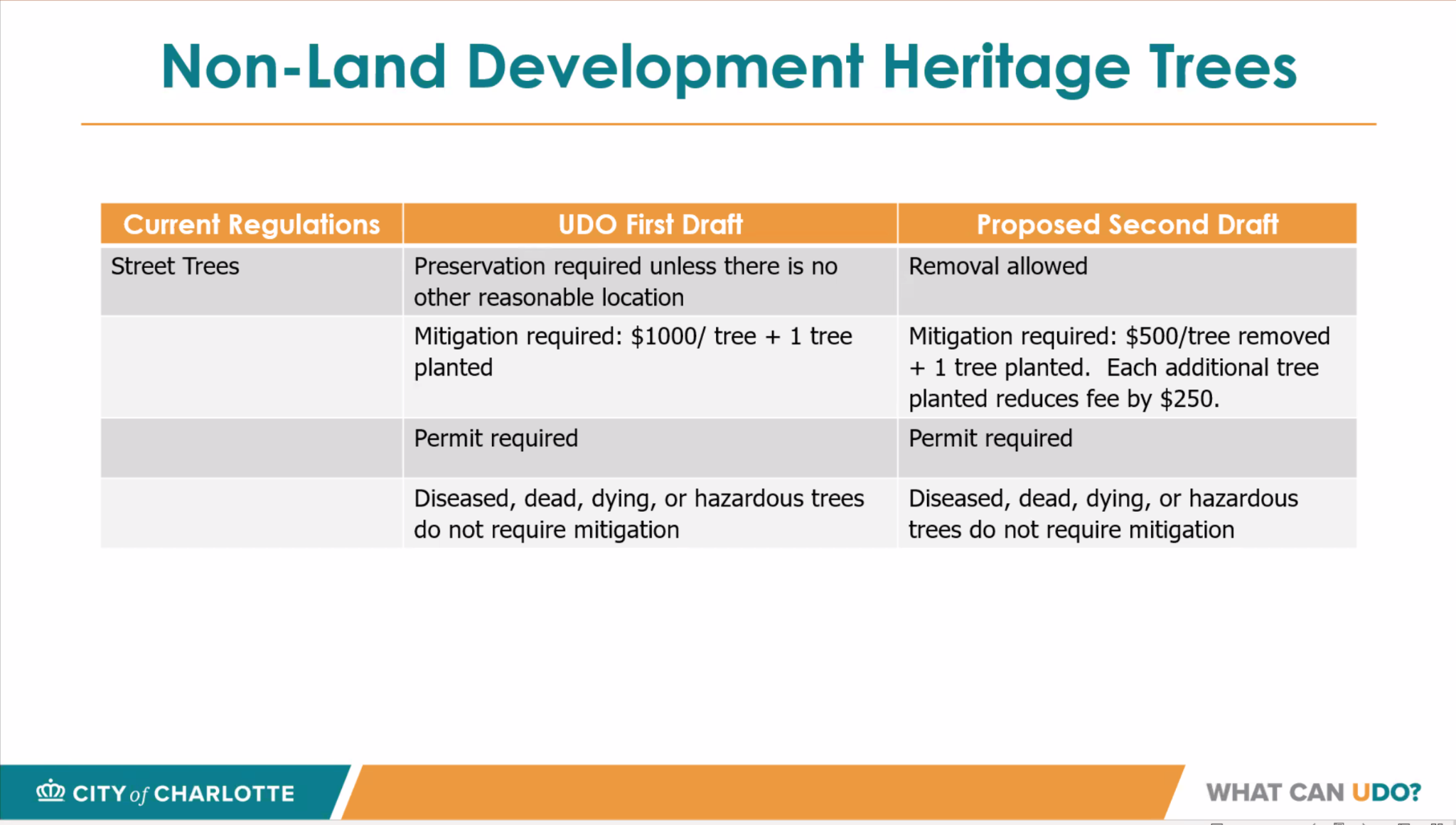 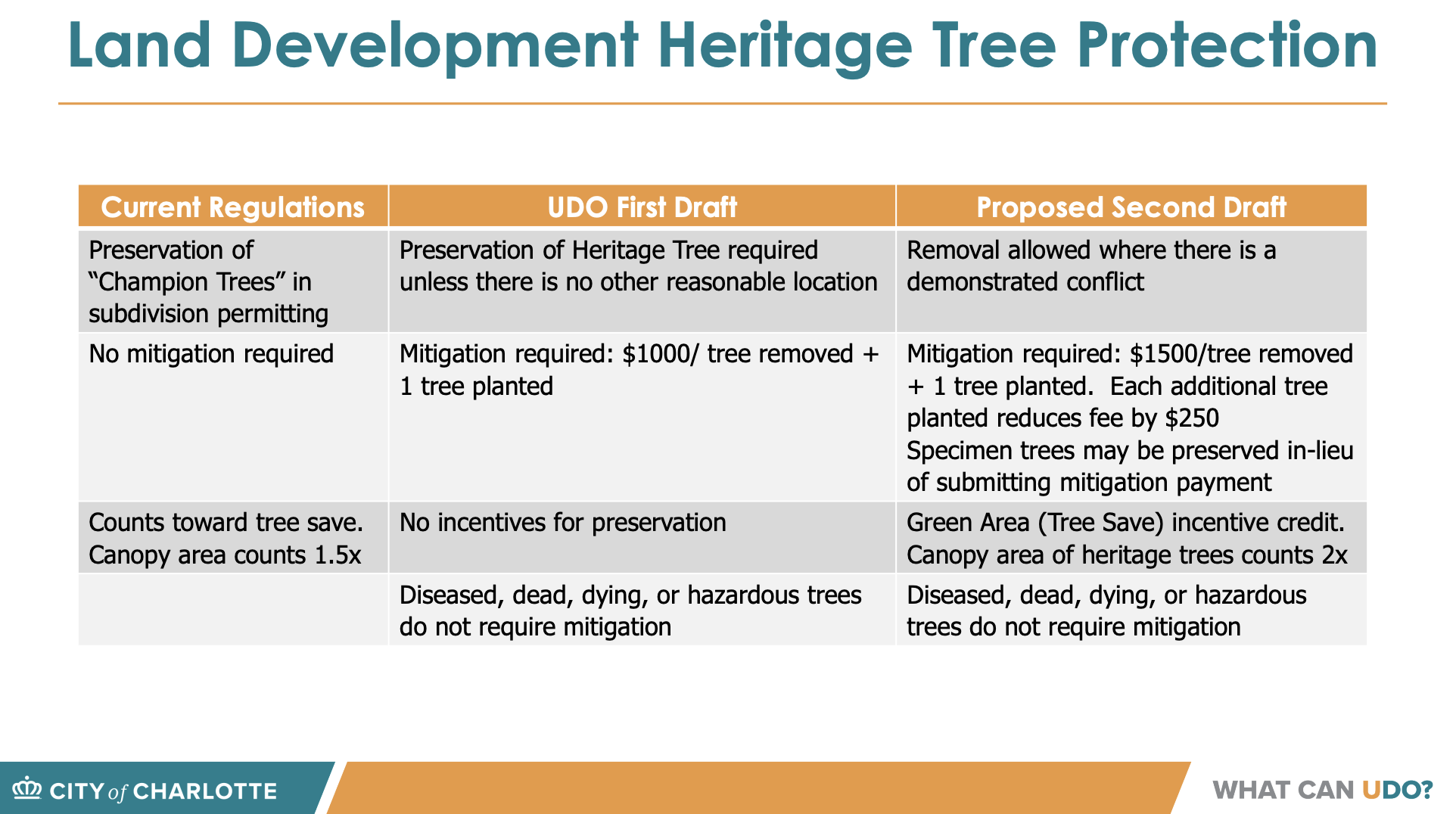 "Trees removed without a permit due to health or hazard shall be either certified by an ISA-certified arborist "or" adequately documented through picture, video or other documentation prior to removal."

Our concern is that, without a permit or a way of tracking dying, diseased trees, it could be exploited as a loophole to take down trees that are not in such conditions. No one will take a large heritage tree down alone, so an arborist or tree service would be involved. We propose filing a post-permit with appropriate proof in these cases. This would allow for fast action and not endanger property or persons but would provide accountability.

What does Charlotte’s new UDO draft say about parking?

The regulations on parking in the new draft are relatively similar to where they were in the first draft.

This increase from 200 feet to 400 feet near our transit stations could have serious consequences, including the perpetuation of auto-oriented development and transportation patterns in areas that should become highly walkable. Minimum parking requirements this close to mass transit stations would add to the costs of building workforce/affordable housing in areas where a car is least needed. The city should instead pursue options that have worked in other cities, such as parking permits for residents in nearby neighborhoods. We request that parking minimums not apply within a reasonable distance (700 feet) of a rapid transit station, especially restaurants/bars.

The maximum 12-foot sidewall height for duplexes and triplexes in Neighborhood 1 zoning districts has increased, rising to 20 feet in the second draft. This change will allow more housing variety for duplex and triplex dwellings.

How does the second draft of the UDO change building-height rules in Charlotte?

The maximum building height has increased in several districts between the first and second drafts. Those places include the Centers districts (Neighborhood, Community, and Regional) and the Campus district (IC-2). The maximum height with bonus has also been increased in most of these districts. 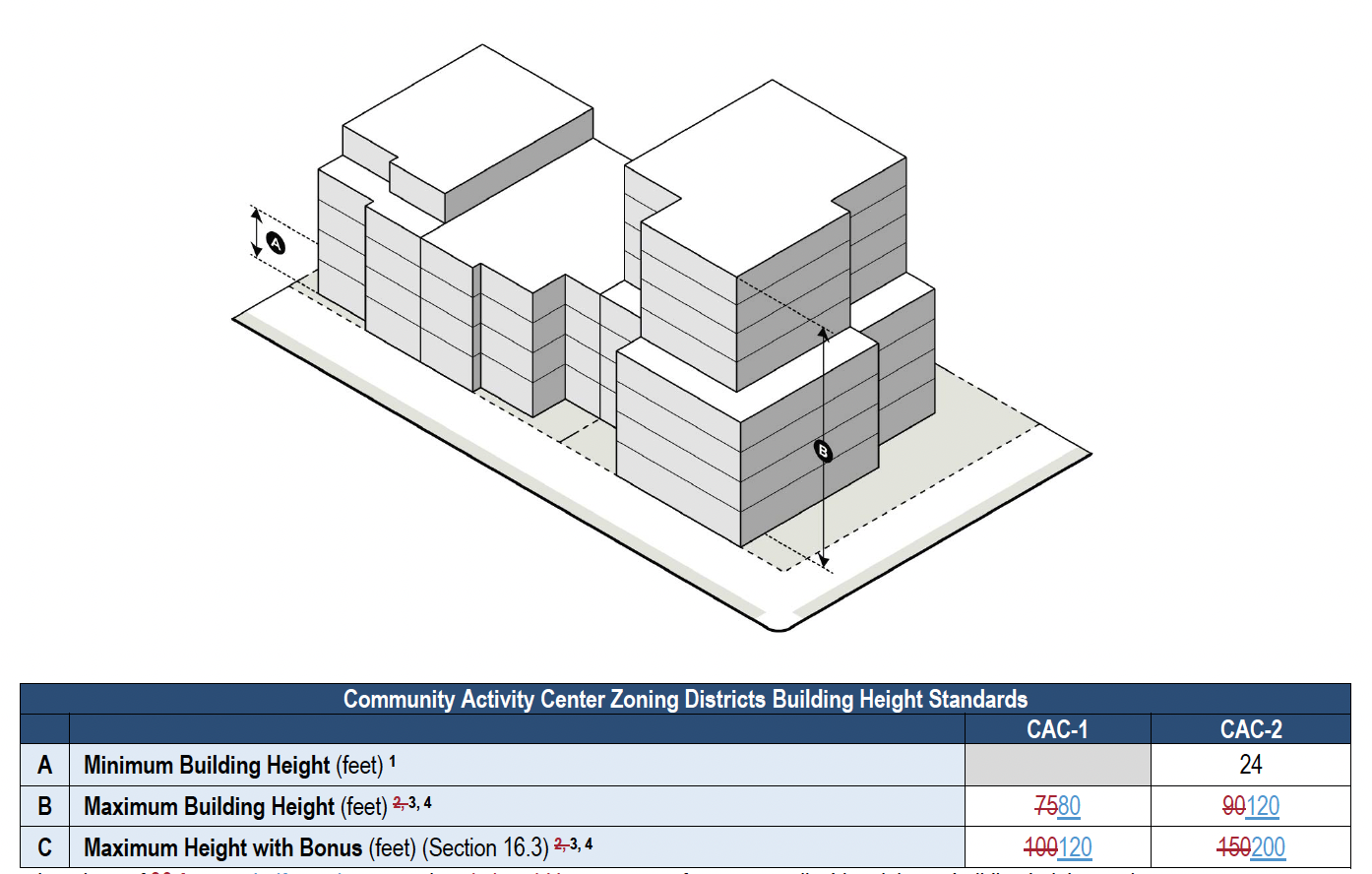 What does the second Charlotte UDO draft say about electric vehicle parking spots?

City staff has removed a requirement that 10% of parking spaces be "EV Ready," which would have increased construction costs without immediate benefit. Instead, the definition of "EV-Capable" now includes reserving the room for future expansion. This change will reduce upfront development costs and therefore housing costs, while ensuring there are no physical barriers to the future installation of EV charging infrastructure on those parking spaces.