Many growing cities are building better bus networks. Will Charlotte be next?

Update: CATS has extended the public comment period for Envision My Ride through May 4th.

As the Charlotte Area Transit System (CATS) public comment period on the proposed map for the Envision My Ride bus network redesign draws to a close this Friday, April 6th (get your comments in!), we're taking a closer look at why cities around the country are making major changes to their bus networks and the results they're seeing.

Why the CATS bus network is overdue for a redesign

Some CATS bus routes have remained virtually unchanged for decades. Over that time period, patterns of housing, employment, and travel have changed dramatically. CATS is using the following standards to determine what constitutes an optimal bus route: density, linearity, walkability, and proximity. 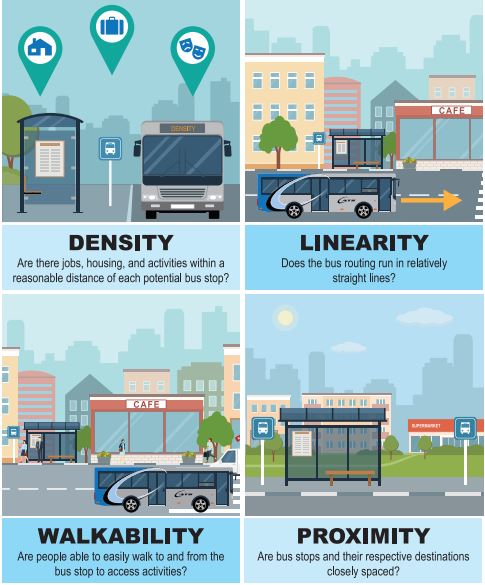 Charlotte's bus ridership has declined 17% since 2011 and the average one-way trip time for a rider who has to transfer is 90 minutes. It's not surprising that fewer people are riding the bus. The current network just isn't meeting the needs of most riders. Only about 20% of riders traveling into Uptown on a bus route are actually trying to reach Uptown as their final destination. The rest have to transfer to reach their final destination. Yet we have a very radial "spoke and hub" network with uptown as the hub. Who wants to spend 3 hours per day on the bus, waiting for the bus, and transferring between buses?

Metro areas that have completed bus network redesigns include Houston, Omaha, Jacksonville, Orange County, Columbus, Baltimore, and Portland. More than a dozen cities including Charlotte are in the process of planning or implementation.

This isn't easy work for CATS or the municipalities it serves. Trade-offs between service frequency and geographic coverage are necessary, even if total service hours for the bus fleet are increased. Considering that the overall travel speed including stops for a CATS bus is about 12 miles per hour, it's clear why linearity (minimizing the number of turns and diversions off of major streets) is important for improving travel times for riders. As bus routes are moved out of neighborhoods and back toward major streets, some riders will have to walk farther to their stops. But for most riders, their overall travel time (walking to the stop plus time on the bus) will be significantly shorter than before.

The new network will move most riders to their final destinations more quickly than the current network can, but the new crosstown connection opportunities will mean that more riders will have to transfer from one bus to another outside of Uptown. Some transfers will require walking from one corner of a busy intersection to the opposite corner. This is why we're so focused on the connection between walkability and transit! Our Walk2Transit project highlights the importance of ensuring safe and ample crosswalks, sidewalks, and other pedestrian infrastructure.