Transit Equity and the Road to Vision Zero

Most people who ride transit for daily transportation reach their stops by walking. But how safe is that walk (or bike ride) to and from transit? And how many people who might want to ride transit choose not to because they can't reach stops safely? In this latest blog post on transit equity, we explore how Charlotte is using a Vision Zero approach to work towards eliminating traffic-related deaths and severe injuries. 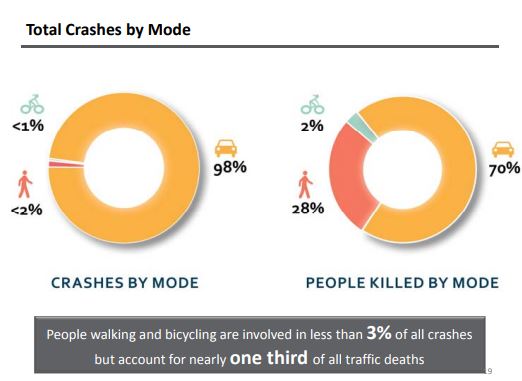 When City Council adopted the new Transportation Action Plan (TAP) in 2017, they also adopted Vision Zero as one of that plan's objectives.

From Concept to Plan to Action

Unlike some objectives that remain buried in adopted plans, Vision Zero is a goal that the city has funded (with $2 Million in the FY 2019 budget) and is actively working towards. The Charlotte Department of Transportation (CDOT) worked quickly to assemble a Vision Zero Task Force. At our first meeting in June, we learned about the concept of Vision Zero and brainstormed concerns, opportunities, needs, and who needs to be included in the process. In July, we worked on a vision statement and guiding principles, followed by committee work to address equity, data analysis, and public engagement. The process will culminate with a presentation of the final Vision Zero Action Plan draft in November. After that, it will be time to implement!

A quick look at the data on traffic fatalities reveals some startling truths about the most vulnerable users of our streets. People aged 20-29 and 50-59 are at a disproportionately higher risk than people of other ages. African-Americans comprise around 30% of Charlotte's population, but over 40% of the city's traffic fatalities. CDOT is working with the Government Alliance on Race and Equity (GARE) to recruit diverse stakeholders to the Vision Zero team, educate the team about the realities of inequity, collect and present data to present in maps or graphs, and evaluate the prioritization of pedestrian projects.

A Way Forward with Data

It's not known how many of the people who were killed or seriously injured were walking or riding a bike to connect with public transit. The city's process will include a review of all fatal and serious crashes for age, race, gender, and location. This incident-level data will be combined with city data on median income, transit ridership and routes, and car ownership to better understand the relationship between transit use and risk of being involved in a collision.

27 pedestrians and 4 bicyclists were killed on Charlotte's streets last year. Many of them were killed on streets with outdated infrastructure, or by drivers who were speeding and/or inattentive.

The simplest definition of priority is "the first thing". In order for the Vision Zero approach to make a significant impact on reducing those numbers, the prioritization of human life must be the top consideration when designing streets, enforcing laws, and educating the public.