Lanes just for buses and bikes coming to Central Avenue

Charlotte just took a big step towards improving its public transit system and the equitable use of city streets! At their September 8 strategy session, Charlotte City Council unanimously approved CATS's plans to pilot a bus lane while preserving the existing bike lane on Central Avenue between the former Eastland Mall site and Eastway Drive. The plan was presented by CATS CEO John Lewis and Charlotte DOT Director Liz Babson.

For the past few years, we've been advocating for Charlotte's leaders to make the bold decisions necessary to get people where they need to go faster and more efficiently on buses. We're excited to see such broad support for this project and we can hardly wait to see it come to life this October!

Charlotte Mayor Vi Lyles believes transit is critical to Charlotte's growth and economic vibrancy. During the meeting, she shared a heartbreaking story of a woman who contacted her because there was no bus service within walking distance that would allow the woman to get to work on time and back home in time to take care of her family. Lyles said, "We have to help people find a way to get around the city without the expense of owning a car."

Mayor Pro Tem Julie Eiselt pushed the City to work on bus prioritization on additional routes like Providence Rd. "It's going to be a hard change because people don't want to get out of their cars."

We're grateful to the leadership of our City as they make policy decisions that meet the needs of ALL people to get where they need to go each day!

Why start with Central Avenue?

Central Avenue is one of the most vibrant and diverse corridors in Charlotte. It's also a very popular route with CATS bus riders.

This pilot project is the most recent phase of CATS's Envision My Ride initiative.

Envision My Ride aims to provide better transit service by redesigning the bus network. It's happening in these three phases. Before we focus on the Central Avenue pilot project, here's the quick version of what's already happened in the first two phases:

You can think of this as the phase that's easily visible as lines on a map showing where bus routes go. When the LYNX Blue Line light rail extension opened in March 2018, CATS also adjusted 22 bus routes and added 9 new routes including 4 cross-town routes.

In October 2018, CATS adjusted 24 additional routes. This was a major structural change! Many routes were "straightened out" to provide more direct service and shorter travel times.

In February 2020, CATS increased frequency on 4 key routes so that the buses come every 15 minutes. This is also when the new MetroRapid bus service began running on the I-77 express lanes, dramatically reducing travel times between Charlotte and North Mecklenburg.

It's exciting that buses are already running more frequently on key routes, although additional frequency is needed across the rest of the network. 15-minute intervals between buses should be the minimum standard to aim for in the short term. Popular bus routes will need to have even more frequent service to really help people get where they need to go efficiently, especially when transfers between routes are required.

This is the phase we're in now!

Adding more buses to the road and straightening out meandering routes will only get us so far. You likely aren't surprised to hear that CATS buses are getting slowed down by traffic congestion.

City Council just approved a contract for work to begin on CATS's Bus Corridors Study, which will define ways to improve reliability of buses throughout the CATS network.

At the end of 2019, CATS successfully piloted a shared bus/bike lane on 4th Street in Uptown between McDowell St and the Charlotte Transportation Center. It's now being made permanent! Read our previous blog post about it.

CATS ultimately wants to create a seamless dedicated bus lane along the length of Central Avenue all the way into Uptown. The next phase, which will be built this fall, is to convert the right lanes of Central between the former Eastland Mall site and Eastway Dr. to a bus-only lane. The existing bike lane (separated by a painted buffer space) will be maintained during the pilot. 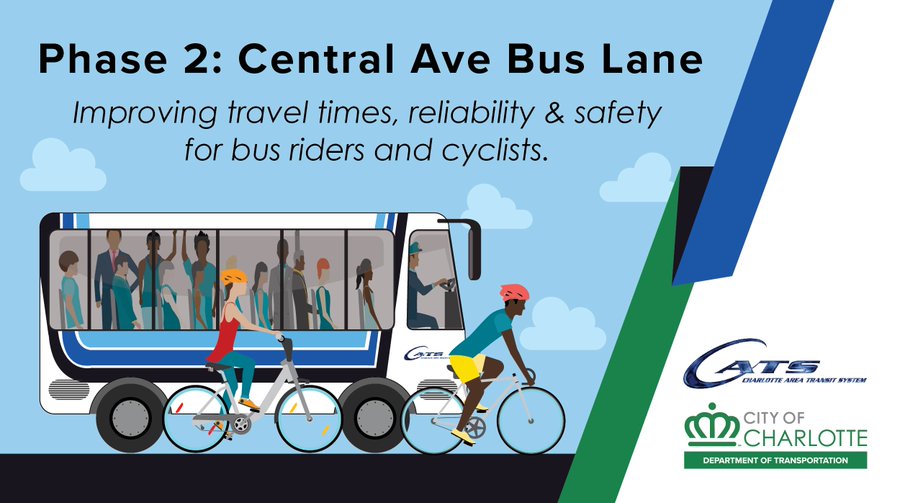 Here's a map of the portion of Central Avenue that will be transformed by the pilot project this fall. Bus stops are shown. 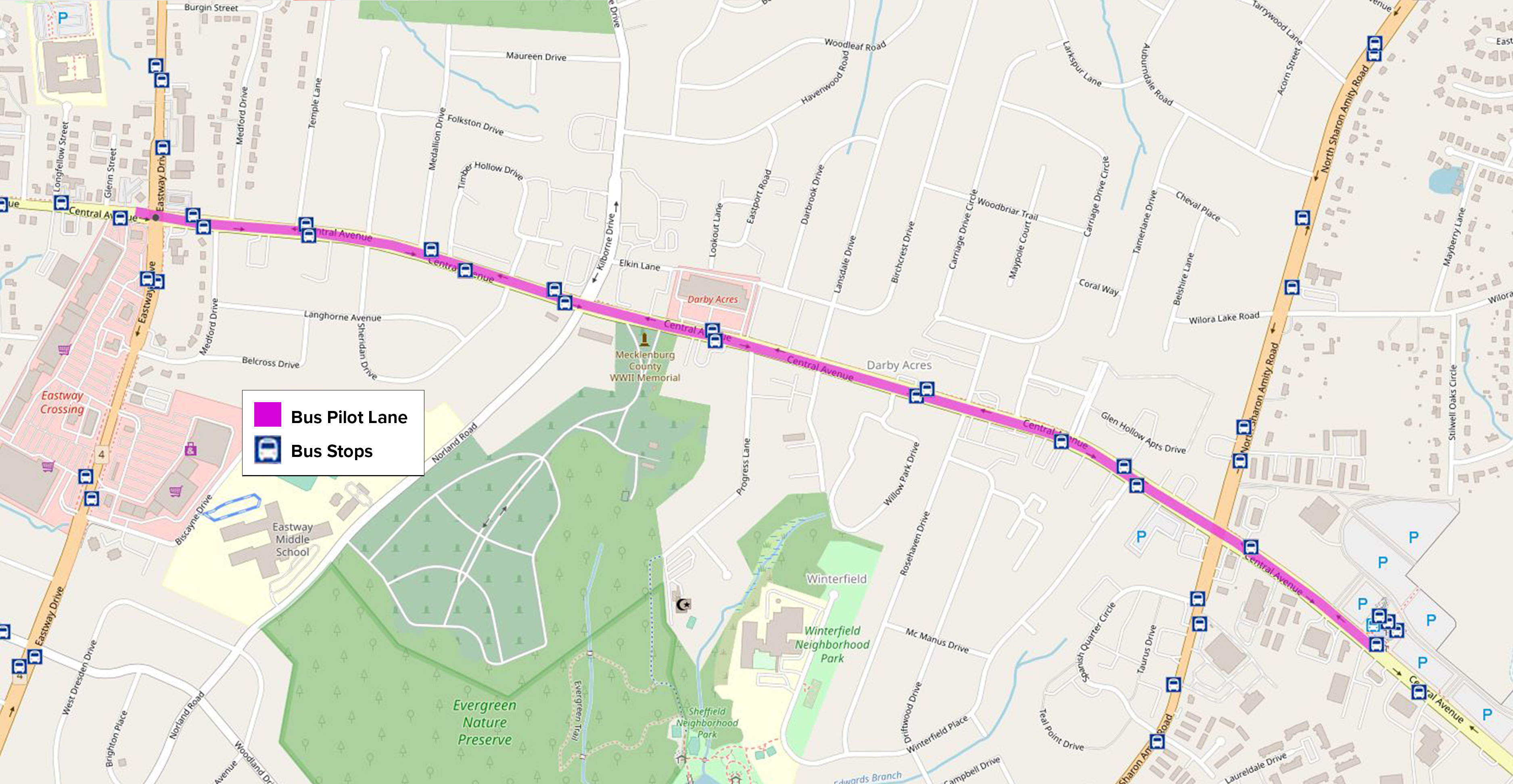 What are CATS and the Charlotte DOT hoping to accomplish with this pilot?

Beyond the obvious benefit of providing dedicated space for bus riders and people on bikes, this pilot will help the City to:

Why will this pilot end at Eastway Dr. instead of extending through Plaza Midwood?

We'd like to see the full conversion of Central Avenue into a truly multi-modal corridor happen faster, too!

Mr. Lewis explained that the Eastland to Eastway section of Central Avenue is very access-controlled, which means it has turn lanes, a median, existing bike lanes, and wider sidewalks. It's going to be more technically challenging to create a safe and effective dedicated route for bikes and buses in the Plaza Midwood section. If you're familiar with that area, you know it has 2 vehicle lanes in either direction without turn lanes, no bike lanes, narrow sidewalks, and buildings close to the roadway.

The City is planning and implementing the pilot project with their own staff. But to complete the Plaza Midwood to Uptown section in the next phase, they'll need to bring in outside expertise. We know it can be done, and we hope it happens as soon as possible!

How YOU can support space on our streets for buses and bikes: