Charlotte's first lane just for bikes and buses is a WIN!

It's hard for bus drivers to stay on schedule and carry riders to their destinations quickly if the buses are getting stuck in traffic. Our city's leaders are experimenting with ways to give buses dedicated space on the street so the public transit system can be more efficient. It's called bus prioritization, and we're huge fans!

In December 2019, the Charlotte Area Transit System (CATS) and Charlotte Department of Transportation (CDOT) began a pilot project to provide dedicated street space for the exclusive use of buses and bicycles on E. 4th Street. They created a single, combined bus/bike lane between South McDowell and the Charlotte Transportation Center (CTC).

How did it go? And why should you care even if you don't ride transit? We have answers! 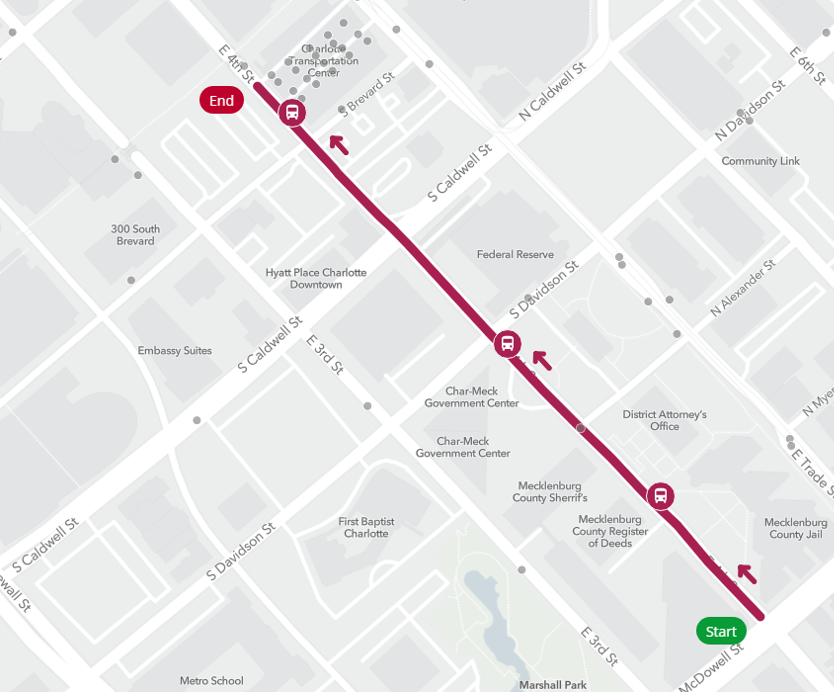 The lane provides exclusive access for buses inbound to the CTC and bikes. (map: CATS)

Imagine you've been commuting to and from work by bus for years in Charlotte. As more people moved here, you saw traffic congestion get worse and worse. Your commute by bus got longer and longer. This is exactly what has happened in Charlotte. We're sharing the story of how our city's leaders are solving the problem, and how you can be supportive.

CATS is implementing the Envision My Ride initiative to redesign the current bus system. It began with modifications to bus service to better connect with the LYNX Blue Line light rail extension in spring of 2018, followed by major changes to the the structure of the bus network in October 2018 to provide more crosstown service and opportunities to transfer without having to go into Uptown.

At the May 18 City Council Transportation, Planning and Environment Committee meeting, CATS CEO John Lewis presented on the outcomes of the 4th St. bus/bike lane pilot and explained how it's an important step forward for the bus network redesign.

During the pilot period: 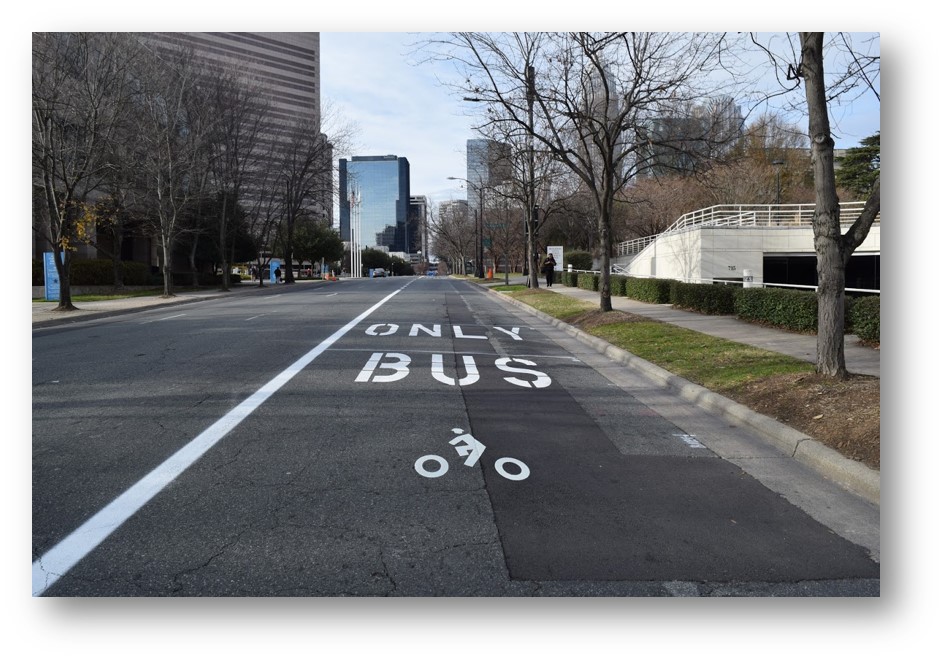 The pilot phase of the project used white paint, but we're eager to see it painted red! (photo: CATS)

1. Structure: First, CATS physically redesigned the bus network away from a spoke and hub model.

2. Frequency: Almost 40% of CATS' current bus routes have frequencies greater than 30 minutes, and in some cases there's a wait of between 45 minutes to an hour before the next bus comes. Mr. Lewis said, "We continue to have conversations about how we fund additional frequency."

3. Effectiveness: "If we had all our buses on 10 or 15 minute headways and they’re still stuck in the same congested corridors and traffic that everyone else is, then we haven’t maximized the investment that we’ve put into the program. This is part of a structured look at other corridors that we can...make these kinds of changes and other technological advancements…to help move our riders more efficiently throughout the region." said Mr. Lewis.

It's about land use that supports transportation equity.

In order for Charlotte to equitably prioritize sustainable modes of transportation, we all need to acknowledge that biking, walking, and transit aren't abstract concepts. They're grounded in the physical environment. They only work well when the land they're happening on supports their use!

Here's what that means: While people riding bikes deserve the full use of the street, most feel safer on protected bike lanes than in lanes shared with cars. People walking need wide well-maintained sidewalks, signalized crossings, and crosswalks. And people riding transit need access to uncongested street space through interventions like shared bus/bike lanes and technologies like transit signal prioritization and queue jumps.

Making bus prioritization a reality will be critical to allowing Charlotte to achieve its transportation, economic mobility, and climate goals. Read more about how the various planning processes work together in our post about the Charlotte Moves Task Force.

"But I don't ride transit. Don't take my lanes away!"

Maybe there's not a transit stop within walking or biking distance of your home. Or you need to drop off and pick up family members during your commute. Or your bus trip would take many times longer than driving. We always encourage people to choose sustainable forms of transportation, but we know it may not be feasible for everyone right now.

But as you've probably noticed, Charlotte's population growth shows no signs of slowing. If we as a city don't get serious about providing all people with attractive options to driving alone, we're heading towards a traffic gridlock situation. That means you and your car will be stuck in traffic, too. Efficient public transit that people actually want to ride can help keep traffic moving smoothly for everyone.

Streets are one of our largest shared public spaces. Yet the vast majority of street space has been given over entirely for the driving and parking of cars. Shouldn't streets be used for more than just moving people in cars?

It's likely that when 4th Street is resurfaced soon, the bus/bike lane will be made permanent. We think it's very important that the lane includes red paint to clearly delineate the space for buses and people on bikes. We also love the symbolism of rolling out the proverbial red carpet for transit riders. They deserve it for helping Charlotte to grow sustainably! 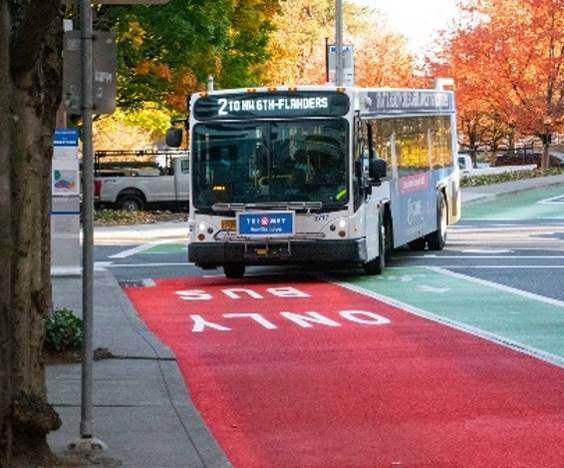 Numerous cities are already using red bus lanes including shared or parallel bike lanes where it is safe to do so. The list includes Portland, Washington D.C., New York City, Cambridge MA, and of course Denver, where the (self-identified) transit nerd writing this article literally watched the paint dry on the city's first bus lane.

The 4th St. pilot lane successfully met the needs of people on bikes, transit riders, and transit operators without significantly affecting travel times or congestion on the general purpose lanes of 4th St. While that's great and we celebrate it, we know that now City leadership will need to make some difficult choices on other corridors that are already experiencing significant traffic congestion.

Let's remember that "the traveling public" includes people on buses, too. A bus full -- or even half-full -- of riders needs to take priority over single-occupancy cars if we're going to meet the mobility needs of a rapidly growing city.

As CATS continues the Envision My Ride initiative, we'll keep you informed about the corridors that they're focusing on for bus prioritization. If those corridors are in areas near where you live or work, think about how you could talk to your neighbors and colleagues about the importance of keeping buses moving. It's about connecting people to jobs, schools, shops, restaurants, doctors' offices, and all of the usual daily destinations with the same level of dignity and ease that car drivers enjoy.

Together, we can shift the conversation away from "Taking a lane from cars" to "Giving a lane to people using sustainable transportation".