Hits and misses: What Charlotte can learn from other cities' bus stops

U.S. cities vary tremendously in terms of how bus stop locations are chosen, how amenities like shelters and benches are prioritized among stops, and how the stops are maintained. We're recapping what works and what doesn't.

In our previous blog post, we covered the factors that make a bus stop work well for riders. We hope you'll check out TransitCenter's Sorry to Superb: Everything You Need to Know About Great Bus Stops report that both of these posts are based on. 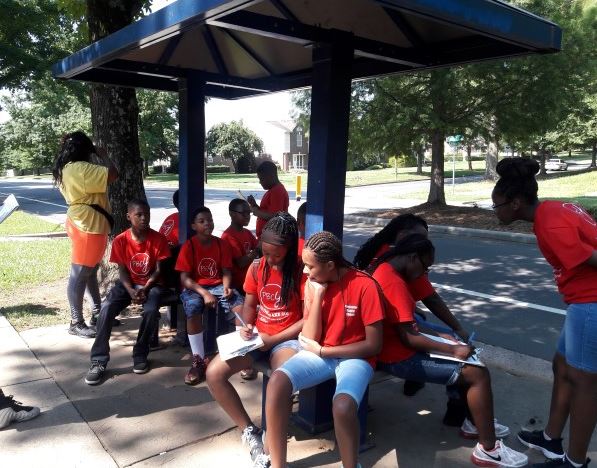 Young volunteers during our Walk2Transit project identified features of good bus stops, like this one on Clanton Rd.

Who's responsible for bus stops?

Metro Transit in Minneapolis-St. Paul primarily manages its own bus stops. The agency chooses placement of stops, amenities like benches and shelters, signage, and ongoing maintenance. This is similar to the approach of the Charlotte Area Transit System (CATS). The advantage of this arrangement is that management of stops is easily coordinated because decisions can be made quickly within the department.

As you might imagine, bus stop management becomes much more complicated when multiple agencies and outside partners are involved. In contrast to Metro Transit's and CATS' relatively straightforward bus stop management structure, there are many parties involved in Los Angeles' bus stop policy. Unfortunately, this has led to few bus stops being built that really serve Los Angeles' riders well. Bus stops there are often chosen more for their advertising value than for their ability to meet riders' needs. A very slow negotiation process for bus stops outside the city limits often bogs down the process of bus stop approval and construction.

What it means for CATS: Fortunately, CATS is well situated to manage its own stops. Placement of stops is coordinated with the Charlotte Department of Transportation (CDOT) to ensure safety of riders and other road users. Since both CATS and CDOT are departments of the City of Charlotte, this coordination is efficient. Yet there is an opportunity to improve the process with a more objective and data-driven approach.

The CATS bus network is growing through interlocal agreements with municipalities in surrounding counties. The rail system is also likely to expand beyond Mecklenburg County's borders with an expected recommendation for the future Silver Line light rail to terminate in the town of Belmont in Gaston County. As CATS' service area expands, it will be important to integrate best practices (and avoid worst practices) for managing the many stages of transit stop approval and maintenance.

The TriMet transit agency in Portland really excels at creating a superior pre-boarding experience for riders. In the past 10 years, they've reduced stops from 7,800 to 6,600. While that may initially sound like a negative, it actually allows the buses to travel along their route more quickly. By concentrating on carefully choosing fewer bus stops that best serve riders rather than having more closely spaced stops, TriMet has more financial resources to build superior stops at optimal locations. They take quick and decisive action to improve the customer experience. A streamlined bus stop approval process allows TriMet to rapidly adjust their bus stops based on customer feedback.

TriMet analyzed its bus stops and found that 32 percent of them lack adequate pedestrian connections. They worked out an agreement with the Portland Bureau of Transportation to fund capital improvements to stops, including flashing pedestrian beacons and crosswalk markings.

What it means for CATS: Since the second phase of the Envision My Ride bus network redesign, some of the bus routes are a lot more crowded. Especially during rush hour, riders are getting on and off at more stops all along the routes. That can slow the bus down as it has to stop and start every few blocks. We hope that CATS will adjust bus stop spacing to avoid slowdowns, while also ensuring that its elderly and disabled riders can access stops safely.

We're enthusiastic that the City's new Vision Zero Action Plan and future Unified Development Ordinance will usher in a new level of coordination between CDOT, CATS, and the Planning, Design & Development Department to better plan bus stops. Expected to be finalized in January 2019, the Vision Zero Action Plan will include goals to establish policy for bus stop placement to prioritize rider safety not only at the stop, but as riders walk to and from stops. We support a data-driven approach to funding new pedestrian and bicycle infrastructure that will help people access transit stops safely without a car. The new Unified Development Ordinance should concentrate future multifamily development in areas that are safe and accessible to transit rather than along major streets with no safe pedestrian access.

The future of transit is bright.

Sustain Charlotte is playing an active role in the future of transit accessibility. Our Program Director serves on the Vision Zero Task Force and our Executive Director serves on the Advisory Committee for the Unified Development Ordinance. With your support, we'll continue to work for better transit service and all the infrastructure that supports a great walk to it.

Sustain Charlotte is grateful for TransitCenter's financial support and technical assistance as we work for better transit.