Would you like to live in a city that diverts ALL of its waste from the landfill and has a neutral carbon footprint? Would you like your children or grandchildren to inherit a city where 100% of creeks are fishable and swimmable and the tree canopy is growing? This is the vision for Charlotte in 2050 that city staff and elected officials are working towards and refining. We're excited to see bold community indicators and tangible metrics in the draft plan!

Charlotte City Council's Environment Committee is moving closer to adopting a FY16 Strategic Focus Area Plan for the environment. In response to councilmembers' requests for tangible indicators of progress, Assistant City Manager Hyong Yi presented a revised version of the plan. A draft of the plan is available in the April 6 meeting agenda.

The plan includes different indicators and metrics for the city and for the community. City indicators can be achieved internal to the City's operations. Community indicators will require involvement and support from residents and businesses throughout Charlotte and Mecklenburg County.

Let's take a look at the draft City Indicators and Metrics:

Waste, Energy, Water and Air were included among the indicators in the FY2015 plan. A new category, Smart City, is being proposed for the FY2016 plan. "Smart City" isn't just another buzzword.  Mr. Yi explained, "One new addition is "Smart City". We're linking technology with policies for waste, air, water, and energy to be more sustainable as a city and a community." Councilmember David Howard emphasized the need to clarify the public's understanding of the term. He said, "We need to educate the community about what "Smart Cities" is and what it isn't."

The plan also includes a draft set of Community Indicators and Metrics: 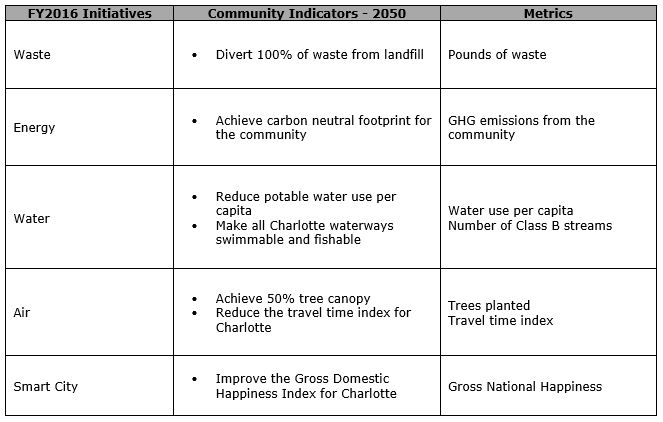 The Gross Domestic Happiness Index (GDHI) originated in the tiny nation of Bhutan, where it is used as a formal indicator of prosperity. Unlike the traditional Gross Domestic Product that focuses exclusively on economic growth, the GDHI includes measurements of environmental protection, responsive government, preservation of culture, and other factors that are known to contribute to human happiness.

Councilmember Ed Driggs said, "I love the idea of a Gross Happiness metric....but attempting to define it could open a rather contentious can of worms...I'd be willing to engage in a conversation to try to define it." He explained that happiness to one person might mean the ability to hop in their car and quickly drive across town, while another person would define happiness as being able to ride transit. (Although there's some great research linking happiness to transit proximity!) Mr. Driggs cited this as an example of why the conversation about Gross Happiness may have to cross City Council committees. We agree that more consideration of resident well-being and happiness should factor in to all decisions made by elected officials, whether those are decisions about the environment, transportation, housing, education, or other issues.

Just before the meeting ended, Councilmember and Environment Committee Chair John Autry thanked staff for the latest draft, saying, "This Focus Area Plan is in its best shape I've seen since I've been on council."

The committee will continue to discuss the content of the draft Focus Area Plan before making a recommendation to the full City Council.

The next Environment Committee meeting is scheduled for 12pm on Monday, May 11 in Room 280 of the Charlotte-Mecklenburg Government Center. Meetings are open to the public. Check the online schedule, since dates are subject to change. We realize that daytime meetings are hard for many people to attend, so we'll keep you posted!