We're excited to share that this week CATS CEO John Lewis decided to purchase hybrid electric buses instead of diesel or CNG! 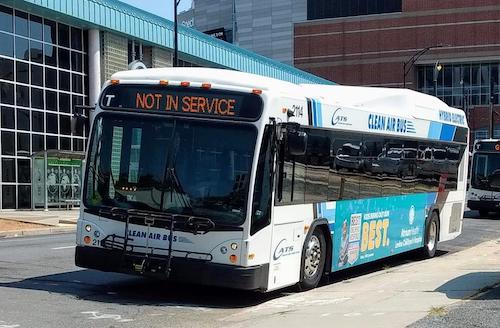 You've probably heard us talk about the City of Charlotte's Strategic Energy Action Plan (SEAP), the plan to get the City's motor fleet to zero carbon emissions by 2030, and further reduce city-wide emissions by 2050. We believe strongly in that action plan, which is why in July we and many of our partner organizations wrote to Charlotte's City Manager, pressing him to move forward with the purchase of clean energy buses, rather than the compressed-natural gas (CNG) buses being considered.

Read our letter to City Manager Marcus Jones, below.

The undersigned organizations applaud the investment in electric-powered buses for the Charlotte
Douglas Airport shuttle service that you included in the 2020 budget. This is a concrete step toward
achieving the goals adopted by City Council in 2018 to dramatically reduce our greenhouse gas
emissions. Specifically, the goal of a zero carbon city fleet by 2030.

We are concerned, however, that the City appears to be focused singularly on pursuing compressed
natural gas (CNG) as the long term alternative to diesel fuel for powering the CATS bus fleet. Our
concern is based on the following:

1. CNG is still a fossil fuel/biotic gas and does leave a carbon footprint albeit much less than diesel;

2. CNG requires a substantial capital investment in fueling infrastructure and safety/detection
systems that could become obsolete in the not too distant future due to technology advancements;

3. The fuel needs of the CATS bus fleet in the future may not be fully met by the amount of biogas
that can be captured from the City’s wastewater treatment plants thereby requiring CATS to
purchase CNG from other sources and be subject to market pricing dynamics; and

4. Finally, we are likely to see substantial advancement of alternative motive power technologies in
the future that will have zero emissions and cost-effective operating cost and performance
profiles. This includes both electric-powered and hydrogen-powered buses.

We understand without system-wide charging stations there are some issues with current battery
technology that may limit the utility of electric-powered buses due to the requirements of typical daily
duty cycles of urban transit service. However, miles traveled per charge and charging times are improving
and will continue to do so.

In addition, hydrogen-powered buses are already in use in urban transit applications and can be refueled
faster and have a longer range. London is currently investing in the purchase of double-decker hydrogenpowered
buses for use in the city, which is a solid indication that this motive power technology is rapidly
advancing and will likely become the best long term return on investment to replace fossil fuel-powered
vehicles.

As such, we urge you to carefully evaluate what steps must be taken to reduce the emissions of the CATS
fleet in alignment with our adopted greenhouse gas reduction goals. Technological advancements could
result in an investment in CNG being a very costly mistake.

We are so grateful to all of the partners who helped us with this initiative, and we will continue to work to help Charlotte achieve its SEAP goals.