On June 21, 2021 the Charlotte 2040 Comprehensive Plan was approved by Charlotte City Council by a 6-5 vote with all of the critical policies and goals we were advocating for intact!

By doing so, Charlotte became the first city in the South and one of the largest cities in the nation to end exclusionary single-family zoning. 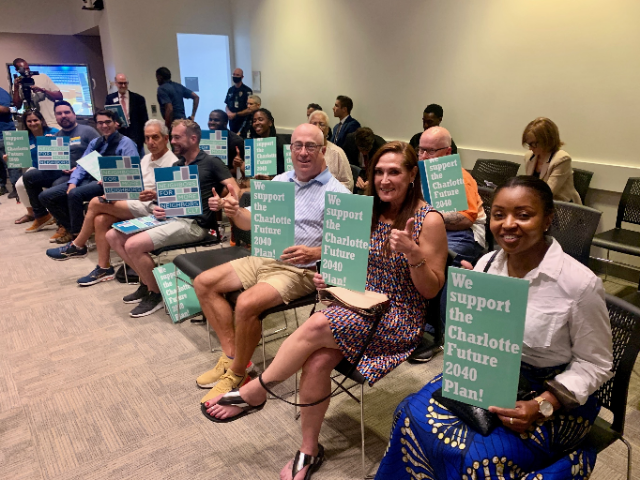 We rallied supporters of the plan and distributed signs to demonstrate support during the vote at Monday's Council meeting.

We've shared with you before why this policy change is important from a housing affordability and neighborhood diversity perspective, but it's also critical from an environmental sustainability and climate perspective. How?

Because without the ability to legally build anything other than single-family homes in 70% of the city (the current status), the car-dependent, suburban sprawl that has dominated Charlotte's growth for the past 70 years would continue to spread across our region like wildfire, consuming forests and agricultural lands in its path.

An example of a sprawling, car-dependent, single-family housing subdivision carved out of the forest; this is largely how Charlotte has accommodated its population growth since 1950 but it is unsustainable.

And the more spread out and car-dependent we are, the more air, water, and climate pollution we generate due to the fact that sprawl locks us into reliance on cars to meet our daily needs.

So the adoption of this plan is an important step towards less pollution and climate impacts as well as a step towards more affordable living for all who call Charlotte home.

Yet getting the plan adopted has been hard work.

Along with our many nonprofit partners in the Neighbors for More Neighbors Charlotte coalition, Sustain Charlotte advocated tirelessly for this plan and defended its goals and policy recommendations for over three months against a well-funded campaign by those benefiting from the status quo to criticize and spread misinformation about the plan.

Please take a moment to thank your City Council Members who voted for the plan as well as three key city staff who provided critical leadership. You can click here to pre-populate an e-mail with their addresses and add your own personal message.