On Monday October 1, the Charlotte Area Transit System (CATS) made changes to 21 bus routes. In fact, this is the biggest structural change to the bus network in years! Our program director Meg Fencil reviews what the changes mean for riders, and how her own daily commute experience on Route 16 changed on Monday. 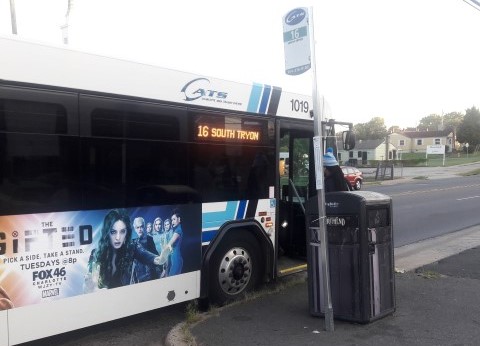 Following the Envision My Ride bus network redesign on Oct 1, some stops like this one on S Tryon are being used more.

This post shares my observations during the first few days of the bus network redesign. It's been only 48 hours since the changes went into effect early Monday morning, and it will take weeks for reliable ridership trends to be defined. We'll share those trends just as soon as we can! Every changed route will have its own ridership patterns and needs for adjustment. In the meantime, here's what I've seen so far from personal experience riding one of those routes: the 16 South Tryon.

Shorter rides: My actual time on the bus is significantly less than before the change. Now that the bus travels along South Tryon St without detouring into neighborhoods, the trip is more direct. No time is lost with the bus waiting to make turns at lights.

New usage patterns: Before the change, the bus picked up riders along the inbound (towards Uptown) route in the morning. But few people got off the bus on that inbound trip any farther from Uptown than South End. Now that the 16 has been extended all the way south far past I-485 to Rivergate, the pattern is totally different. People are getting on and off all along the route.

More riders: As the bus pulled up to my stop near South Tryon and Tyvola this morning, I was pleasantly surprised to see it was almost full. Before the redesign, it was rare to see more than a dozen seats occupied at that point in the route. But this morning as we approached Clanton Road, the bus was standing room only!

As I sat down next to someone in one of the few empty seats, I realized that in my one and a half years of riding the 16, I've never before gotten on the bus in the morning and had to sit next to someone. I'm not complaining! It's exciting to see full buses, but it also means that CATS will need to look at the data and be ready to add more frequent service when and where it's needed.

With the more crowded buses, I'm also seeing it take longer for groups of passengers to pay for cash fares as they board the bus. When added up over multiple stops, that slows down the overall trip. If more passengers paid via passes or the CATS app, boarding would be faster.

Infrastructure needed: Now that many routes are staying on major streets and not meandering through neighborhoods, the riders who previously used stops in their neighborhoods have to walk to different bus stops. They need safe sidewalks, crosswalks, and intersections. They also need a comfortable place to wait for the bus.

The bus stop pictured above is on S Tryon near the Southside Homes community, which previously had bus stops within it. Now that the 16 stays on S Tryon, residents are walking to this bus stop to wait for the inbound bus. Before the network change, I rarely saw more than 1 or 2 passengers waiting here. Usually, no one was waiting at that stop. This morning I saw 7 riders waiting there. Quite a change!

The stop has no shelter or bench, yet is now the closest stop for many riders. It's clear that new infrastructure for riders will be needed here and at other locations as ridership patterns change.

CATS has just made a massive change to the bus network. With any such major change, there needs to be a period of analysis and adjustment. In the coming weeks and months, CATS should very closely analyze ridership data, on-time performance, and customer feedback. This analysis will allow CATS to:

Now that the bus network's structure has been re-designed to be more efficient, it's clear that more frequent service is the next big improvement that will attract more riders.

Learn more about Envision My Ride and find a bus route near you!

Sustain Charlotte's work to support the bus network redesign is funded by TransitCenter.