What can Charlotte learn from a city where over half of trips are taken by walking, bicycling and transit?

This past week our Executive Director Shannon Binns, Program Director Meg Fencil, and Bike & Walk Program Coordinator Eric Zaverl traveled to Vancouver to attend the annual Rail~Volution conference. We were joined by many other Charlotteans including staff from Charlotte DOT, CATS, the Planning Department, and a number of consultants. 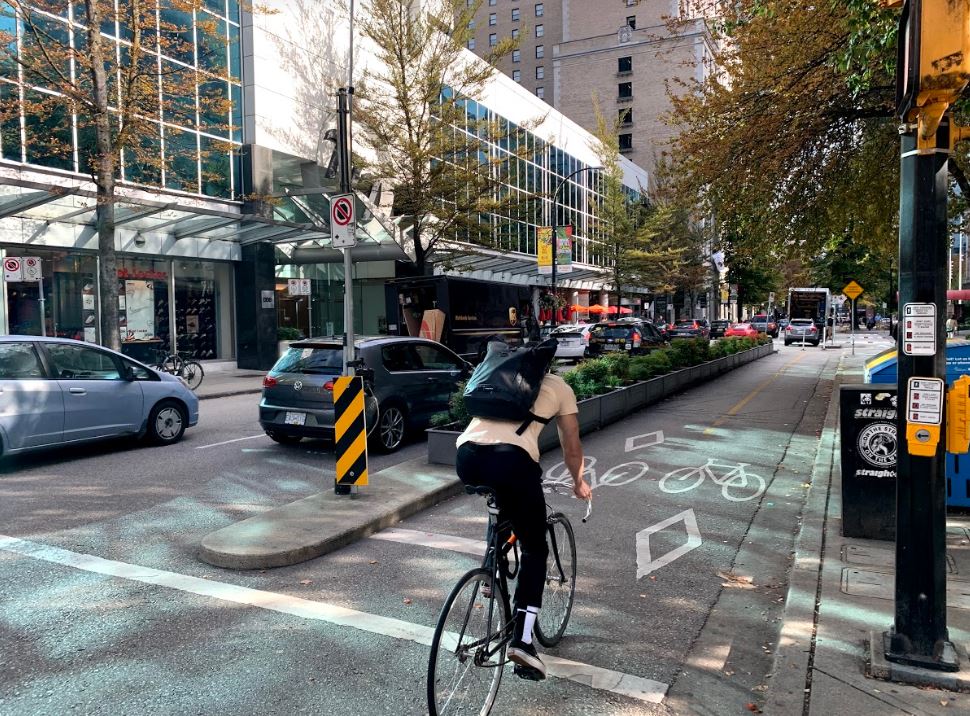 It's pretty easy to ride a bike safely in Vancouver thanks to an abundance of protected bike lanes.

We couldn't imagine a better place to learn about how public transit interacts with the built environment! Here are some key takeaways:

Be intentional about where growth happens.

Vancouver's growth is somewhat limited naturally by the ocean, to the west, mountains to the north, and the U.S. border to the south. But Vancouver's walkable form wasn't just determined by nature. An intentional Urban Containment Boundary is working to limit sprawl. Between 2011 and 2018, 99% of Vancouver's growth occurred within the boundary!

The Charlotte Future 2040 Comprehensive Plan aims to guide how our city grows and how we invest in the city over the next 20 years. As one of the nation's fastest-growing cities, Charlotte needs a clear blueprint for what we want the future to look like and how we'll get there.

Streets are for all people. Really.

We were struck by the way that Vancouver's city planners and elected officials aren't afraid to say something that we rarely hear city leaders say in Charlotte. Over and over, we heard variations of: "Our streets are working for everyone. We did that by making it harder to drive." That's still something that's pretty taboo to say in Charlotte. Making it harder to drive is only equitable and feasible if it's accompanied and preceeded by making it easier to not drive.

Here's the short version of how Vancouver got there:

In the early 1970s, Vancouver began to build a freeway into its downtown core. Seeing that the early stages of construction were cutting off the communities on either side, the city's leaders abandoned the project. This small part of the system remains, but is scheduled to be removed within five years. Instead Vancouver adopted a policy of not accommodating additional single-occupancy vehicles, which means no new roads or road widenings (aside from ones that correct a dangerous situation) within the city limits. They turned their attention to moving people instead of cars. And in doing so, they're building communities that really work for residents. 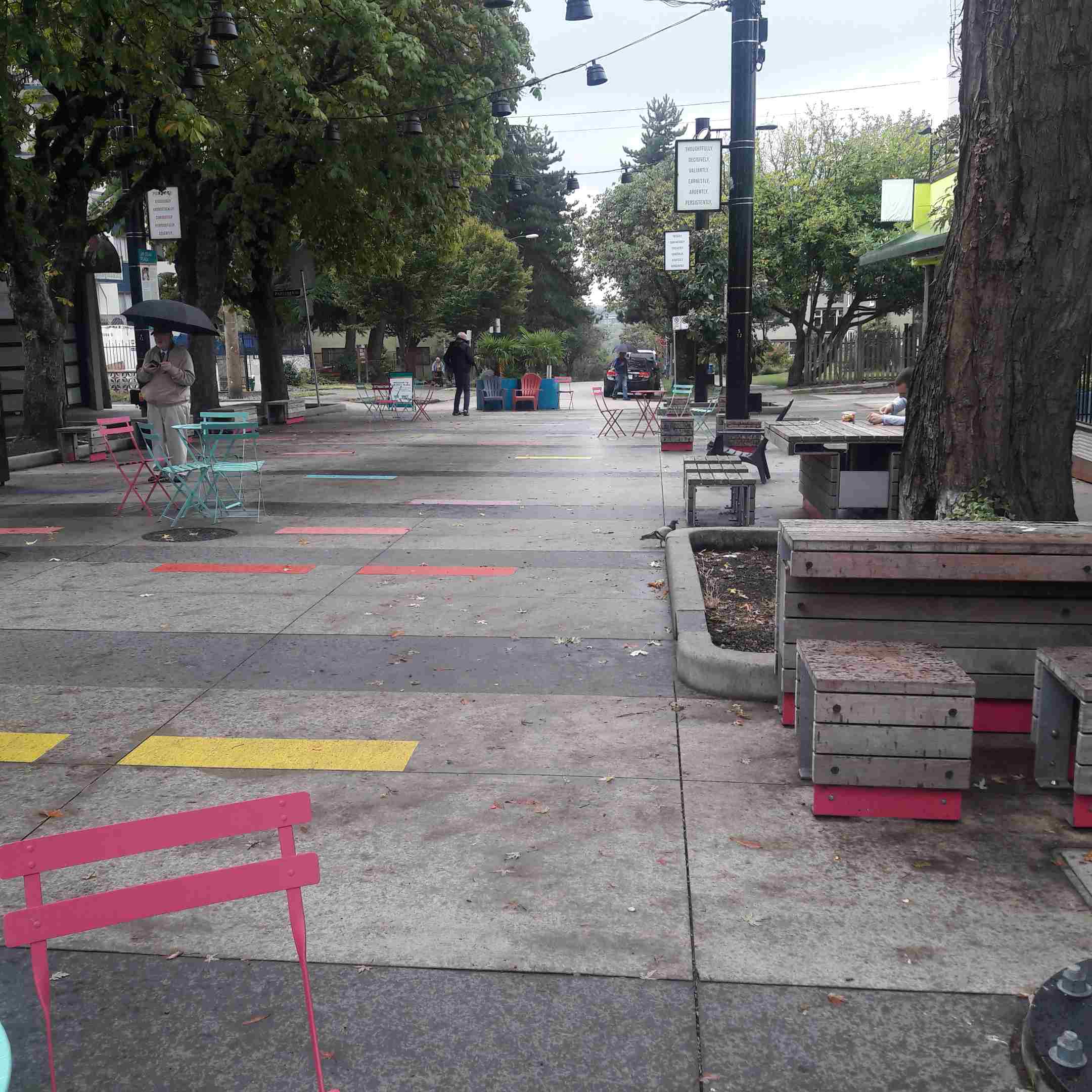 Many of Vancouver's streets have been converted to community plazas.

In West Vancouver, over 80% of trips are taken by walking or bicycling. Imagine that! Not only are there many interesting destinations within walking distance, but it's also a very comfortable place to walk because there isn't much through traffic in the neighborhoods. All of the north-south streets in West Vancouver have diverters to move traffic away from neighborhood streets and back onto the major thoroughfares, as shown below. 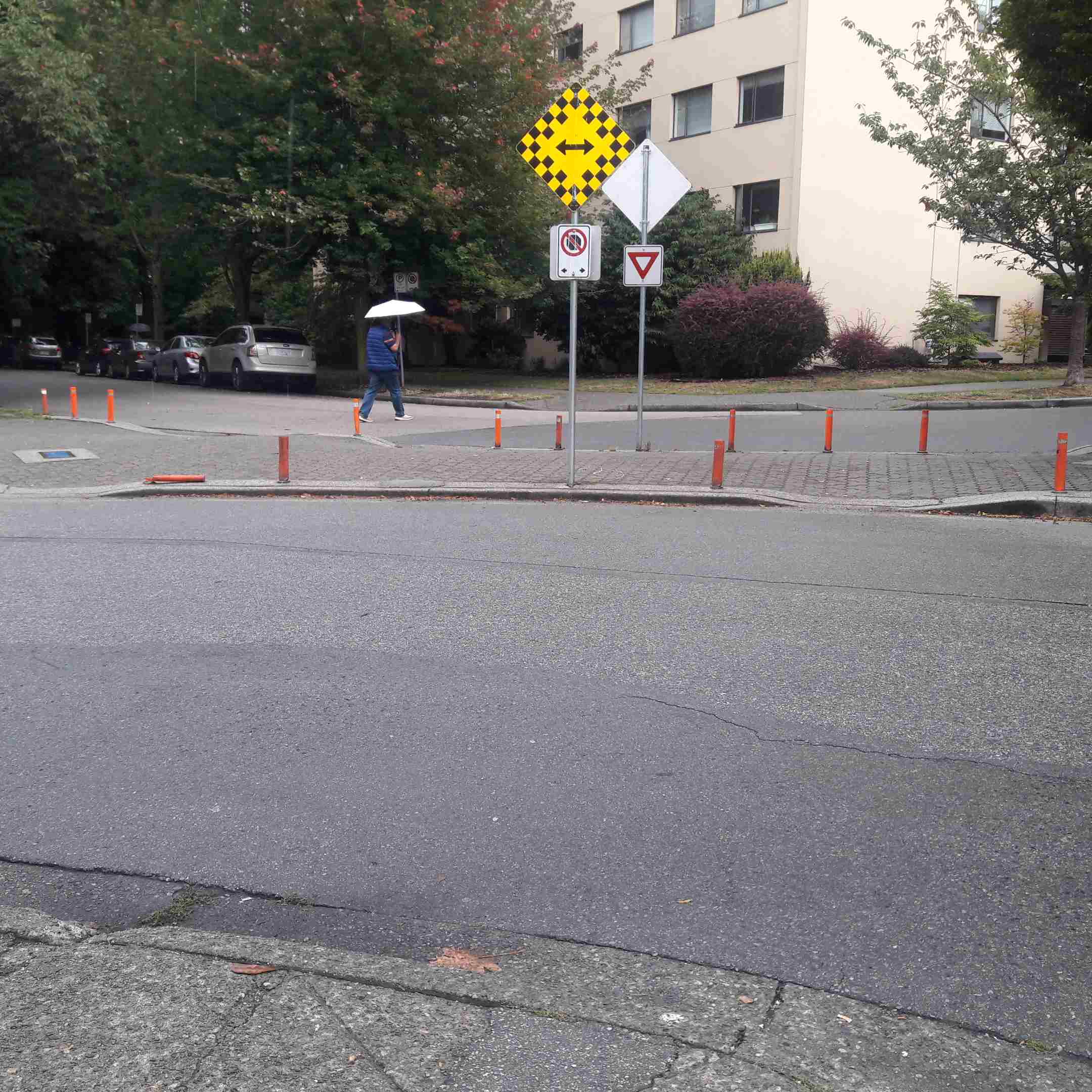 Traffic diverters on north-south streets protect pedestrians and reduce through traffic in neighborhoods.

Make it easier to take short trips without a car than with a car.

Vancouver excels at supporting bicycling, walking, and public transit, so it's no wonder that over half of trips are taken by these sustainable forms of transportation! When you know you can get to work faster by walking than by driving, it's a no-brainer. In one development that we visited near the waterfront, fewer than half of the parking spaces in the garage are ever in use at the same time. It has truly become a "car-optional" community.

How can we get there? First, we need to build our communities with a better mix of uses -- shopping, homes, workplaces, dining, medical care, schools, and more within walking or biking distance. Second, it must be safe and convenient to travel throughout and beyond the community without a car. Third, the built environment should reward sustainable transportation choices and disincentivize driving. That means more facilities like showers for people who commute by bike, conveniently placed bike parking, bus stops that are closer to the front door of a shop than the parking lot is, and the like. It means less free parking (which really isn't free) and political courage to build roads for all people even it congestion increases.

Protect spaces for people on bikes.

We were astounded by the abundance and variety of protected bike infrastructure in Vancouver. A strong network of on-street protected bike lanes, off-street paths and greenways, intersections, and bike-only neighborhood connections clearly give people on bikes a welcoming place to ride. We saw people of all ages and ability levels safely navigating the bike network. 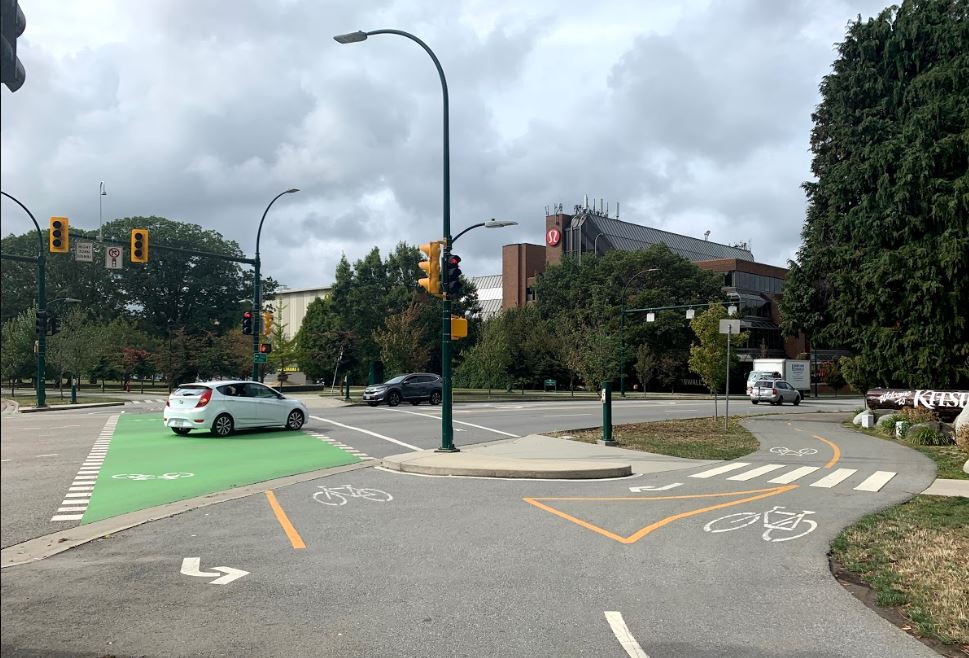 This signalized intersection gives people on bikes their own crosswalk and left turn lane. 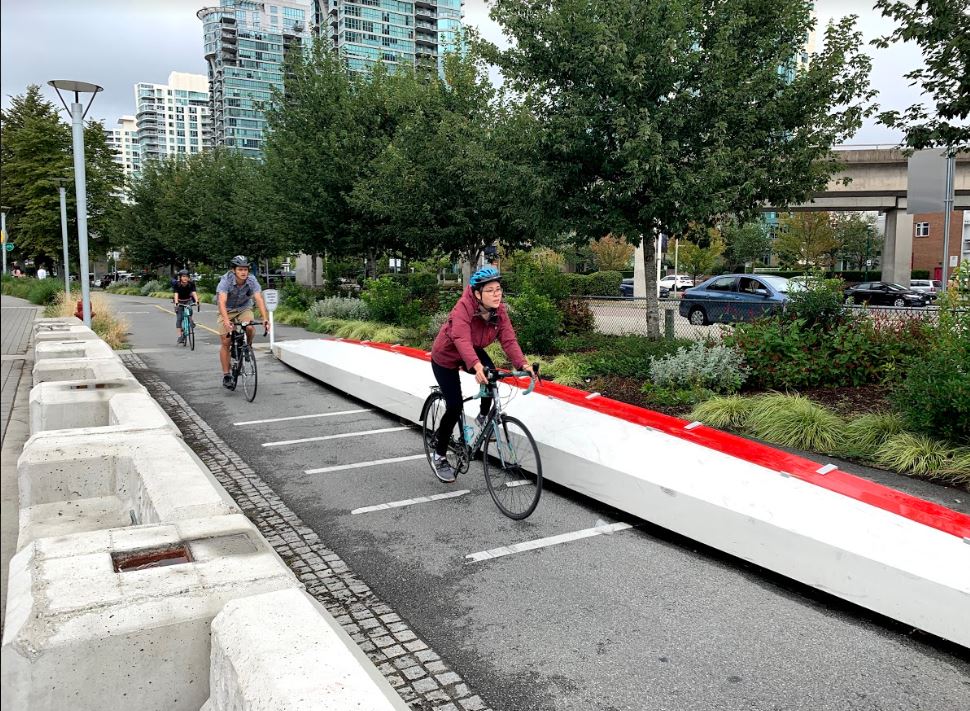 Yes, that's a dragon boat being used to protect a bike lane!

While there's much to love in Vancouver, transportation and land use aren't working perfectly for everyone. Parts of eastern Vancouver are not as well served by public transit, yet are home to many immigrants who don't have cars.

Housing affordability is also a huge concern in Vancouver. This is the third most expensive market for homes in North America. There are very few single-family homes valued at under $1 Million (or about $750,00 in US) in downtown or West Vancouver, so buying a home is out of reach for most people. Fortunately, the affordability of rental properties is much better. Following a shortage of rental properties in the early 2000s, more affordable housing has since been built. This has resulted in a fairly close correlation between incomes and rents in Vancouver.

We were beyond excited about the opportunity to ride one of Vancouver's brand new battery-electric buses just days before the city began its pilot project. Like many cities including Charlotte, Vancouver is interested in electric buses but wants to be sure they will be fully reliable in the running conditions of that city. So they're piloting a few buses and will evaluate how it goes.

We believe it's important for CATS to move towards a battery-electric bus fleet to meet the goals of the Strategic Energy Action Plan (SEAP) that City Council unanimously passed last year. As diesel and diesel-electric buses reach the end of their lifespan, replacing them with battery-electric buses would help us reach the city's goal of a zero-carbon city fleet of vehicles by 2030. Charlotte could follow a similar strategy to Vancouver's by piloting electric buses on some of our shorter routes first, and then trying them on longer routes as battery technology continues to improve. It not only makes sense to protect our environment and reduce our contribution to global climate change, but it's also cheaper to run electric buses when the long-term cost of fuel for other types of buses is considered. 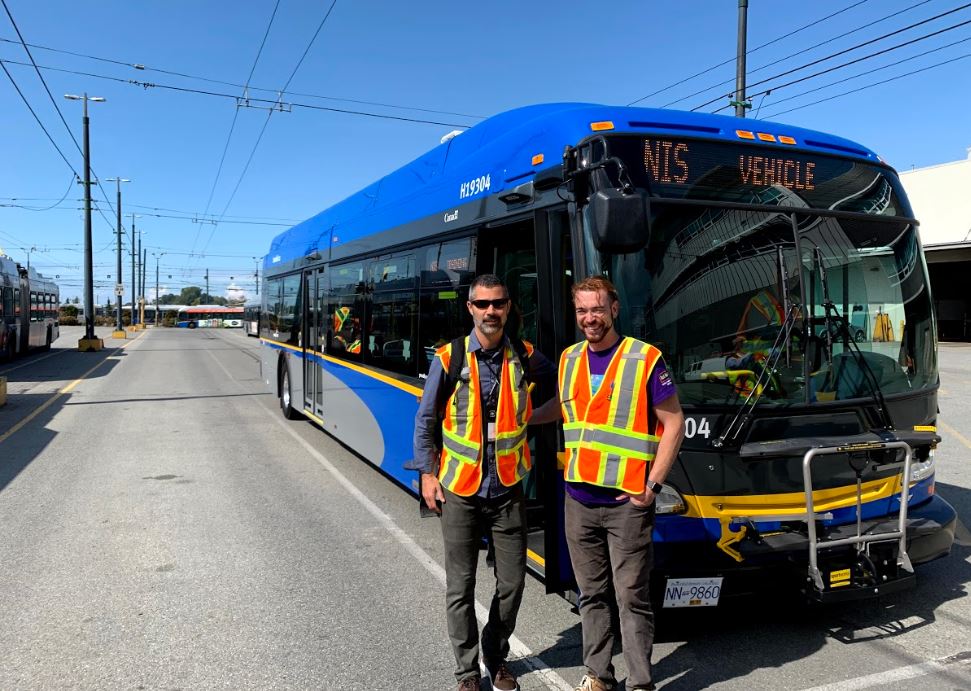 The best place to start is where we are right now.

Vancouver is Vancouver, and Charlotte is Charlotte. We learned some great lessons while we were there, but now we have to figure out how to take the best of what's working there, evaluate what could work in Charlotte, and start implementing!

Vancouver became a great place to live and travel thanks to their city leaders' intentional commitment to smart land use and transportation planning and policy. We're at an exciting time in Charlotte's history with the Charlotte Future 2040 Comprehensive Plan underway, a new Regional Transit Study about to begin, a Vision Zero program that's making the High Injury Network safer, a pilot bus lane on 4th St about to begin this fall, and ongoing efforts to build Complete Streets around the light rail.

How will YOU give your input on Charlotte's land use and transportation planning?