It's tough to be a pedestrian in West Charlotte. Here's how neighbors are changing that.

Imagine a busy four-lane thoroughfare running through your neighborhood. Safe places to cross are far apart, so you may have to walk 1/2 of a mile or more to the nearest marked crosswalk or intersection just to safely reach your home or a bus stop. Even then, unsafe driving behavior like speeding and running red lights makes you worry for the safety of yourself and your loved ones.

This is the daily reality for thousands of residents in Charlotte's West Boulevard Corridor. The area's residents suffer from higher than average rates of serious injuries and fatalities from traffic collisions.

But a neighborhood-based partnership is changing the status quo.

Partnerships at the heart of transportation advocacy

Area residents who were ready to build power to improve West Boulevard began meeting with Sustain Charlotte and formed the Equitable Transportation Team in the summer of 2016. The team is chaired by Charlene Mack, a talented young community organizer who lives and works in the area.

The team has since become part of the West Boulevard Neighborhood Coalition (WBNC). That means even more residents and neighborhoods across the corridor are finding ways to get involved! 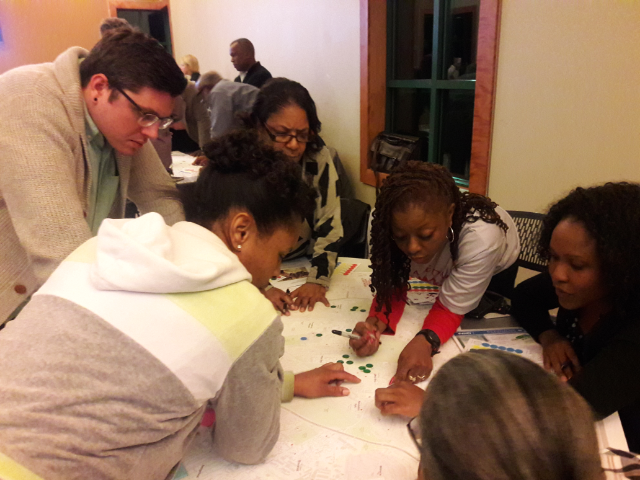 Reviewing land use and transportation patterns at a WBNC meeting

What will our partnership accomplish in 2018?

In January, we set priorities for the year at our monthly Equitable Transportation meeting. The residents decided to host a series of “house meetings” to introduce their neighbors to the project and build up more community engagement.

We're co-hosting one on February 28th as part of Sustain Charlotte's Senior Mobility Project (funded by Southminster) to better understand the transportation challenges that older adults face as they age in their homes. But the stories shared will be about more than just transportation needs. We'll discuss livability and mobility in the broader context of daily life. The meeting will help WBNC to build power within the community by listening to and sharing residents' stories of what brought them to their neighborhoods, as well as what it will take for them to want and be able to remain in their neighborhood. 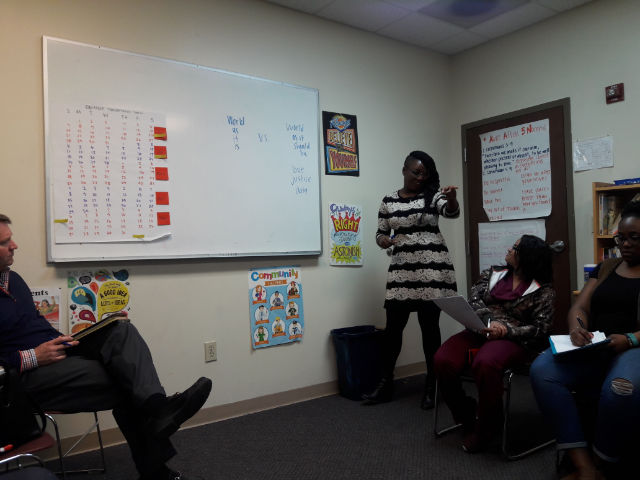 At the February WBNC meeting, Scott Correll from the Charlotte Department of Transportation (CDOT) presented the Findings Report from the West Boulevard Corridor Study. The report includes new street crossings, signalized intersections, pedestrian crossing beacons, intersection improvements, and other infrastructure improvements that have been approved by NCDOT. Burned out street lights and uneven sidewalks identified during CDOT's corridor study have already been repaired. Some of the smaller improvements like the pedestrian crossing beacons can be completed within two years, while the two new fully signalized intersections will take longer.

We know that there's no time to waste. In 2018 and the coming years, the Equitable Transportation Team will advocate for timely implementation of these recommended improvements. We'll also continue to work towards even more long-term solutions to make West Boulevard a safe, accessible, and economically vibrant corridor.

We're planning to co-host an intergenerational service project this summer with over 100 neighborhood children at the Youthquake PBC summer camp as they learn how to be safe when walking, riding the bus, and riding a bicycle. Last July and August, the youth helped the Equitable Transportation Team collect data and observations during a series of Walk2Transit bus stop walkability audits.

Stay tuned for a recap of the house meetings and ways you can support the Equitable Transportation Team!

Sustain Charlotte's neighborhood-based work is supported by Wells Fargo, the Charlotte Mecklenburg Community Foundation, and ZSR Foundation. The Senior Mobility Project is supported by Southminster. The youth-led walkability audits were supported by Transit Center as part of our Walk2Transit Project.