We're speaking up for a better walk to the bus stop!

A network is only as strong as its weakest link.

Even small gaps in a transit network or a sidewalk network can mean the difference between a safe and unsafe experience. That was our message to Charlotte's City Council when we formally introduced them to our Walk2Transit project findings at this week's Citizens Forum. 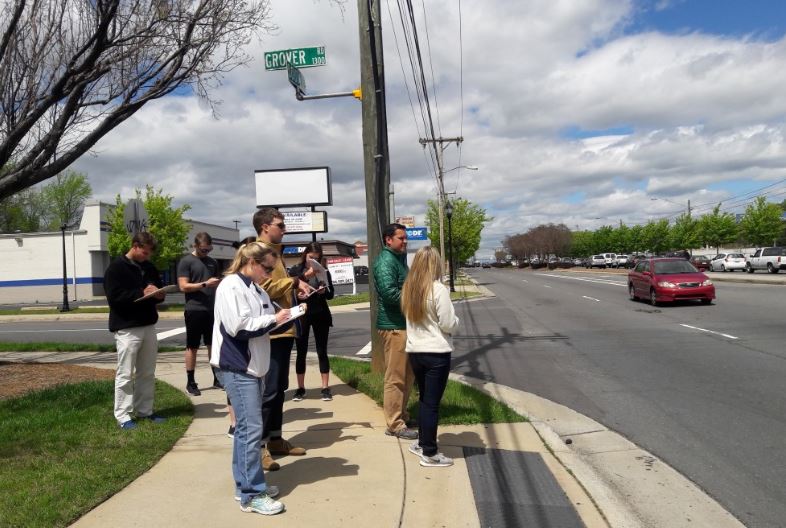 More than 200 people have volunteered to collect data through out walkability audit tours!

Here's what our Program Director Meg Fencil told Council about the findings of the walkability audits and the importance of a good walking experience to bus stops:

I’d like to introduce you to a project called Walk2Transit that Sustain Charlotte has been working on for the past year. The goal of Walk2Transit is to ensure that all Charlotteans have a safe and comfortable walking route to public bus stops.

We identified high need bus stops, crowdsourced photos and comments, and looked up traffic safety data. We led 15 walkability audit tours, and over 200 resident volunteers helped us make observations about the experience of walking to these stops.

Special thanks to Council members Ajmera and Winston who participated in those tours!

The expanded transit network that CATS and city staff are working to bring us will provide faster overall trip times by offering more opportunities for riders to transfer without having to come into Uptown, but it will also require improved pedestrian infrastructure at new transfer locations.

As you know, the previous City Council recently had an opportunity to amend city code to close some loopholes that allow development and redevelopment to occur without sidewalks being built.

Instead of those amendments passing, Council referred the issue to the Transportation & Planning committee.

As a daily rider of the #16 CATS bus and an advocate for the thousands of Charlotteans who walk to and from their bus stops daily, I look forward to you -- the new Council -- fixing this.

We can’t afford to wait.

Gaps --even small ones-- in the network of our city’s sidewalks and crosswalks matter.

9 out of my 10 minutes walking to the bus stop each day are safe, but in that 10th minute -- tonight after I leave this meeting -- I’ll walk along a narrow back-of-curb sidewalk to my bus stop.

Then, in my 10th minute after I get off the bus, I’ll walk across 4 lanes of traffic at an unmarked (but legal) crosswalk to get home because the nearest signal is not within walking distance.

In a city growing as quickly as Charlotte, we can’t afford to develop and redevelop with gaps in our basic pedestrian infrastructure!

CATS and CDOT are already working on some pedestrian safety and minor sidewalk gap projects to help address findings that we’ve shared from Walk2Transit.

Our project volunteers also told us about the infrastructure they observed that makes them feel safer, including some of the city’s

Thank you for supporting these improvements, and we look forward to continuing to support staff in their efforts to make our streets safer for everyone.

I would like to follow up with you after this evening to share more detailed information about Walk2Transit, including our findings and recommendations for the 10 highest need bus stops that we analyzed.

Everyone in Charlotte deserves to come home safe every day, whether they drive a car, ride a bike, walk, or ride transit.

Walk2Transit is funded by TransitCenter.