If a bus full of people crashed and died on our streets each year, we'd probably take notice. But when the lives are lost one or two or three at a time throughout the year, it's easy to overlook the enormity of the problem. 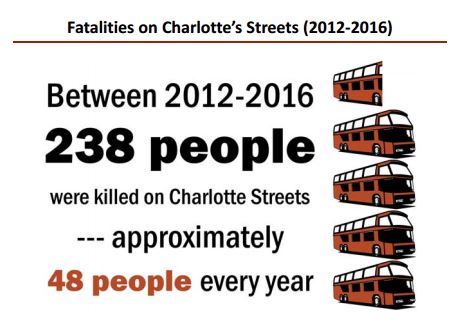 At Monday’s City Council Transportation and Planning Committee meeting, we heard unsettling news about a steady upward trend in traffic fatalities on Charlotte streets. But we also heard the official start of a conversation about how to reverse that trend and eliminate future fatalities and serious injuries.

You read that right. Vision Zero isn't about reducing serious traffic crashes. It's about eliminating them.

There’s been an upward trend of traffic crashes in Charlotte since 2012, peaking at 53 people killed in 2016. Last year, our city recorded more than 30,000 crashes. That’s the highest recorded number here ever. 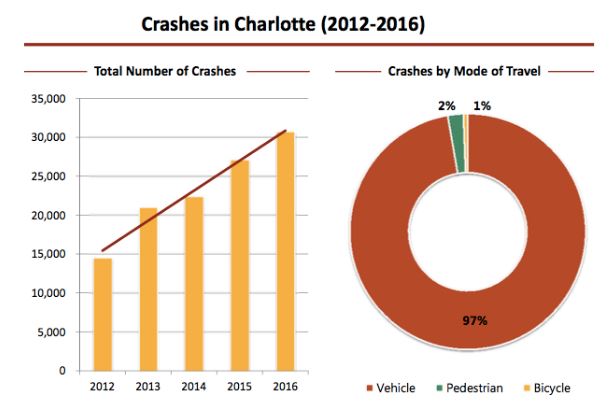 Cyclists and pedestrians are involved in only 3% of crashes, but account for 30% of crash fatalities.

Click here to view the full Vision Zero presentation shown during the meeting. 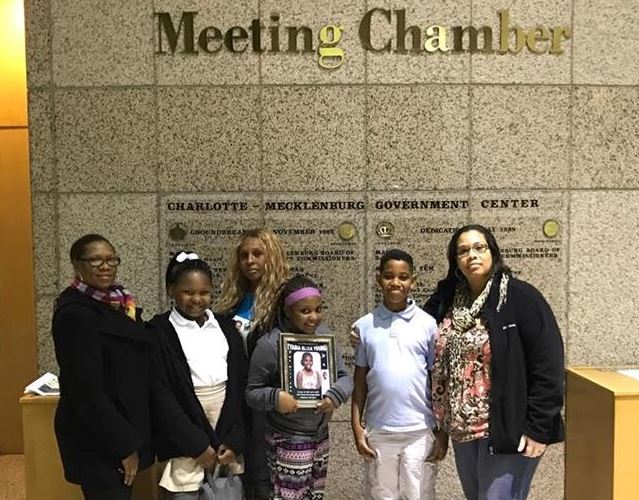 West Blvd residents partnered with us to speak in support of Charlotte's first pedestrian plan!

By voting to support the Transportation Action Plan (TAP) earlier this year, City Council has taken on the charge of working with the Charlotte Department of Transportation (CDOT) to implement the TAP's Objective 2.5.1: The City will implement a Vision Zero initiative by developing a comprehensive program for partnerships, engineering, education, community outreach,  and possible speed and red light running enforcement.

Notice we've mentioned crashes but haven't used the word accident? That's intentional. Vision Zero, a concept that originated in Sweden and is sweeping the globe, operates on five strategies as shown below. The core principle is: In every situation a person might fail - the road system should not. 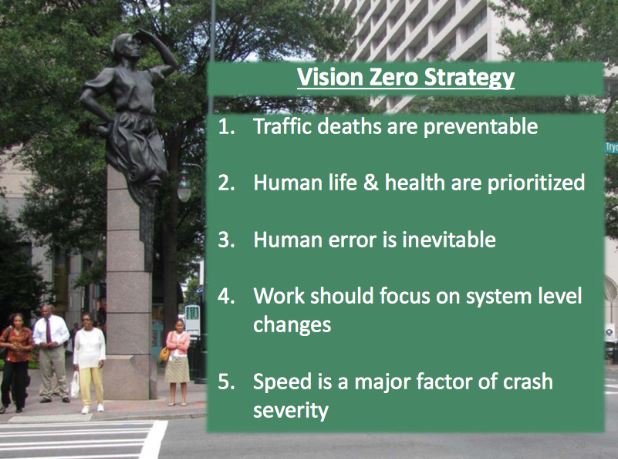 Debbie Smith, CDOT's Engineering and Operations Assistant Division Manager, outlined a plan for Charlotte to join the network of Vision Zero cities and eliminate traffic fatalities and serious injuries. By engaging key agencies like CMPD into the process along with proactive engineering, education of all street users, and automated enforcement for speeding and red light running, the City hopes to stem this deadly rise of collisions.

Danny Pleasant, CDOT's Director, said that launching Vision Zero will “no doubt be the most important work that we will be doing this year.”

People make mistakes, but there is no such thing as a true traffic “accident” that couldn't have been prevented or made less severe. Ms. Smith said we need to design “forgiving streets” to account for inevitable human error. By being proactive with our street designs instead of reactive, CDOT can focus on system level changes instead of taking action only after someone has died or been seriously injured in a traffic crash.

In response to Council Member Patsy Kinsey's (District 1) comment that "In the past, it seems like we had to have a crash [at a location] before we did anything about it.", Assistant City Manager Debra Campbell said, “We are putting the safety of people first...we want to become more proactive than reactive. I think our history has been that we react to crash data. We have enough historical data to know that some of these designs work and reduce the loss of life and serious injuries.”

Mr. Pleasant emphasized the importance of a holistic approach to improving safety. “Instead of [just] looking at intersections, I’ve instructed staff to look at corridors and patterns throughout the city….[E]verything down to where do we locate bus stops, land use, looking across the city. As an organization, what decisions are we making to have a safer city."

There's clearly a need for more signalized pedestrian crossings on our busiest streets, as we've observed during our Walk2Transit bus stop walkability tours. During morning and afternoon rush hour, it can be virtually impossible to cross four or six lanes of traffic safely because crosswalks are often far apart, vehicles fail to yield to pedestrians, and the uneven spacing of lights results in widely spaced vehicles rather than neat 'platoons'. Mr. Pleasant explained how better planning of signals could improve this situation: "We're looking at the idea of more uniformly spaced signals on arterials that will help traffic flow better and [provide more opportunities for pedestrians to safely cross]."

We strongly support and are excited by CDOT's interest in being proactive about implementing traffic solutions that incorporate changing land use patterns, transit use, and a growing desire for safe walking and cycling routes.

Mr. Pleasant welcomed the use of tactical urbanism to test and demonstrate the benefits of physical changes to our city streets: "I know the City Manager is very interested in us doing some tactical urbanism...and tactical urbanism is more than just prettying a place up and making it more interesting. There's a real underlying point that, with that [with these changes, street users are] paying more attention, they're watching out for other people,"

What does speed have to do with it? 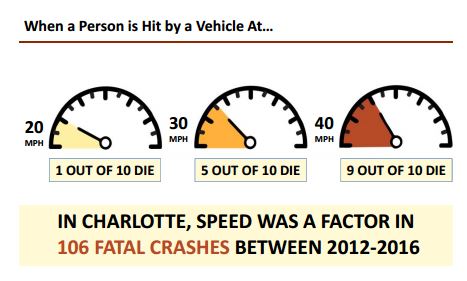 You've likely noticed that running red lights and speeding are rampant problems throughout Charlotte. Although Charlotte-Mecklenburg Police Department (CMPD) officers are making an increasing number of traffic enforcement stops, they are stretched thin and can't physically cover every street and intersection where unsafe driving happens.

With the adoption of the TAP and its Vision Zero objective, that's about to change. Mr. Pleasant said, "You'll see us bringing forth speed limit reductions in parts of town...You'll see us looking for automated speed enforcement...We know that's always controversial and we'll (CDOT and CMPD) work through that very intentionally with you." We fully support this. Countries and cities that have embraced the use of technology to assist their enforcement efforts have seen a dramatic decrease in traffic fatalities and serious injuries.

Council Member Julie Eiselt (who attended the meeting but is not a member of the Transportation and Planning Committee) asked CMPD representatives in the room, “Are you supportive of the use of technology?” CMPD Deputy Chief Jeff Estes said that they fully support the use of automated technology to help enforce speed limits and red light cameras to change driver behavior. CMPD was “supportive then and is supportive now” of using technology.

We would like to thank CDOT and CMPD for their publicly expressed support for working together to implement the Vision Zero objective through innovative engineering and enforcement, in addition to embracing the other proven Vision Zero strategies.

The meeting continued with CDOT Bike Program Coordinator Ben Miller summarizing the positive feedback received during the April 24th Public Hearing for the draft Charlotte BIKES plan.  Four themes emerged from the comments; a lack of facilities map, a need for more enforcement, support of greenways, and funding concerns.  See our comments made during the hearing here. 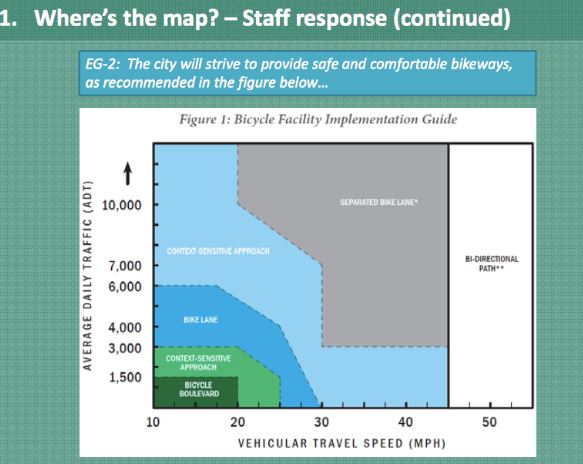 Click here to view the full Charlotte BIKES presentation shown during the meeting.

In regard to the map, Mr. Miller said that a short-term strategic mapping project to connect nodes and corridors with suitable bike facilities would be helpful;… [we] can stitch together some network in Charlotte, but there are still some infrastructure challenges that we would need to address.” He also said, “ there are some short term mapping efforts that would prioritize future projects and we propose that this [mapping exercise] be done by 2018.”

In our meetings with CDOT and at the public hearing, we have asked for this map so that we will be building a safe, connected network as soon as possible.

Just as CMPD commented earlier in the meeting, enforcement is a challenge especially as drivers fail to yield and speed.  “It’s not a bicycling issue,” Mr. Miller told Council Member Patsy Kinsey when she commented about cyclists running red lights and stop signs, “It’s a traffic issue.”

Look for an additional follow-up email later this week with additional information regarding Charlotte BIKES and the protected bike lane demo on the Plaza!