The Transportation and Planning Committee held its first meeting of 2019 on January 14th, where staff shared updates on the Vision Zero 2030 Action Plan, the Transit-Oriented Development Ordinances, and the Comprehensive Plan. 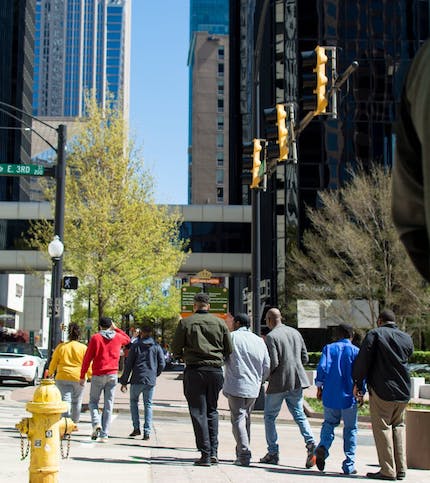 Sustain Charlotte has proudly served on the Vision Zero Task Force and helped draft the commitment statement and action plan.  Smith explained that the action plan is data-driven and focuses on the newly developed High Injury Network (HIN) map. 42 streets, comprising about 10% of Charlotte’s streets, have been identified as high priority corridors because a disproportionately high number of fatal and serious crashes occur on them. 66% of those streets are major streets, also known as “arterials”.  In Charlotte, 45% of all fatal crashes involve speeding. 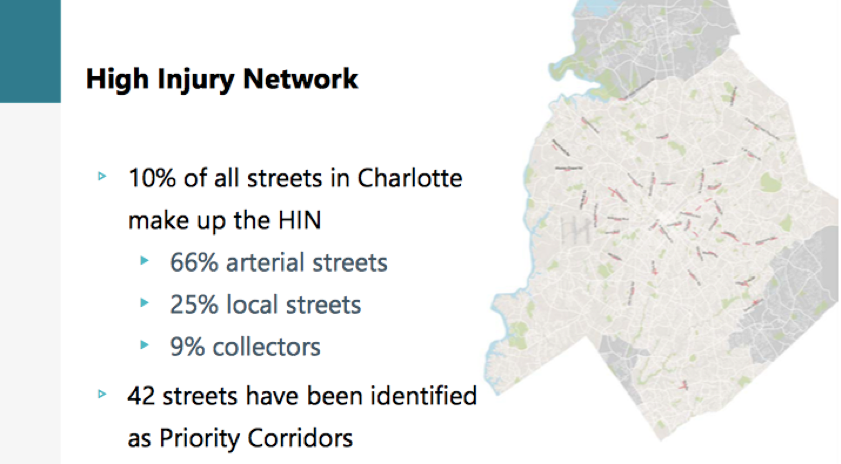 Click here to see the full presentations from staff.

During the past six months, the City has taken adopted an update to the Neighborhood Traffic Calming policy and upgraded 400 street lights.  During the next 6 to 12 months, the City will add 2 miles of separated bike lanes, complete 13 miles of sidewalks, add over 30 pedestrian crossings, and build 20 quick pedestrian fixes in the High Injury Network.  Over the next two years, the City will install 3 new traffic signals and 10 Leading Pedestrian Intervals (LPIs) to allow pedestrians to begin crossing before cars. 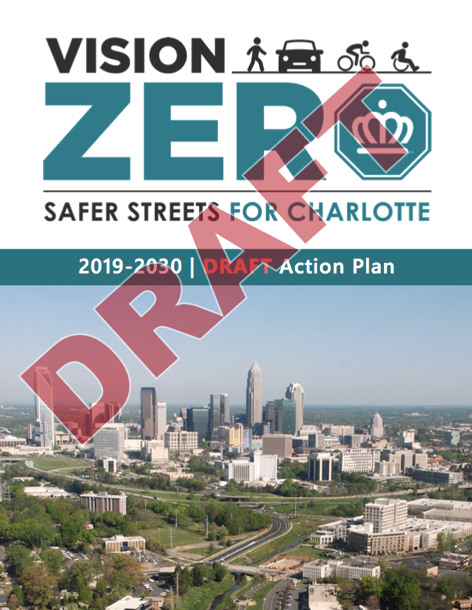 Charlotte Mecklenburg Police Department (CMPD) has also been very involved in the creation of  the Vision Zero Action Plan. They presented at the Transportation and Planning Committee. Their representative said that CMPD is working to raise the profile of enforcement on the High Injury Network and inform community groups about Vision Zero.

Mayor Pro Tem Julie Eiselt said that she is disappointed that there is no mention of red light cameras.  Council Member Winston clarified that the City already has an expanding network of more than 1,000 cameras on the city collecting data on speed.  “This is an action plan of coming up with a Vision Zero strategy,” Winston said, “and that doesn’t preclude the process from recommending specifics that we can discuss and argue over the duration of the process.”

Given that speeding is involved in many fatal crashes and red light running has become rampant throughout Charlotte, we urge Council to explore and implement cameras not only for data collection, but also for automated enforcement as soon as possible.

Committee Chair Eiselt initially said that she was not comfortable sharing with full Council  “Not having read this… I am not comfortable saying we are a Vision Zero city when we don’t really know what we are going to go after first.” Council Member Phipps also agreed that he wanted to read the plan it first before sending it to full Council.  While we appreciate Eiselt’s and Phipps’ commitment to fully understanding the action plan, it is not a document that Council we need to vote on. Rather, the plan is a fulfillment of the Vision Zero objective included in the Transportation Action Plan that Council voted to adopt in 2017.

Winston made the first motion to move the Vision Zero Action Plan  to full Council and a second motion for the Mayor to proclaim Charlotte as a Vision Zero City without a second.

Instead of voting, Eiselt then asked staff to share the Vision Zero draft with full Council prior to the budget retreat so they can ask questions prior to February’s Transportation and Planning Meeting.

Check out our post taking a deeper dive into Vision Zero here.

The new zoning ordinances have been filed with the City.  Check out the timeline from Holmes below. 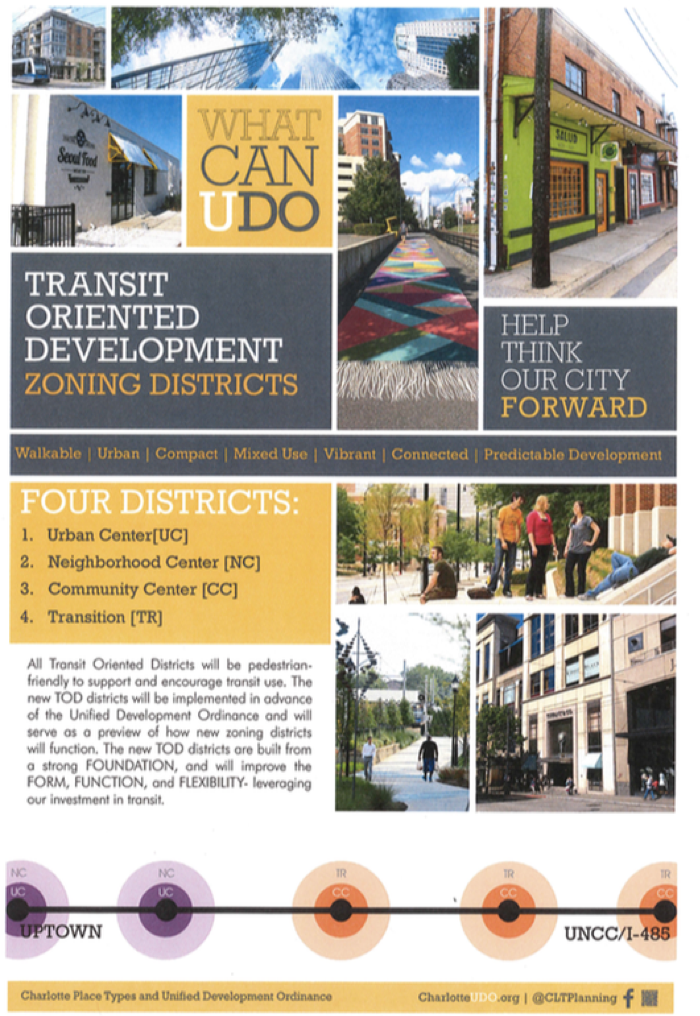 Holmes explained that according to the conditionally zoned parcels, a developer must commit to build public paths such as the Cross Charlotte Trail and Rail Trail, sidewalks, and streetscapes as they appear on City adopted Council maps with all new construction.

CDOT Director Liz Babson responded that the TOD will help identify physical gaps in the trail not covered by new construction.  She said, “The TOD will provide clarity and certainty to the development community and residents of Charlotte.”

Garret Johnson, Planning Department, gave a five-minute update on the Charlotte Future 2040 Comprehensive Plan.  If you would like to join the conversation, please attend any of the upcoming public engagement meetings listed below. 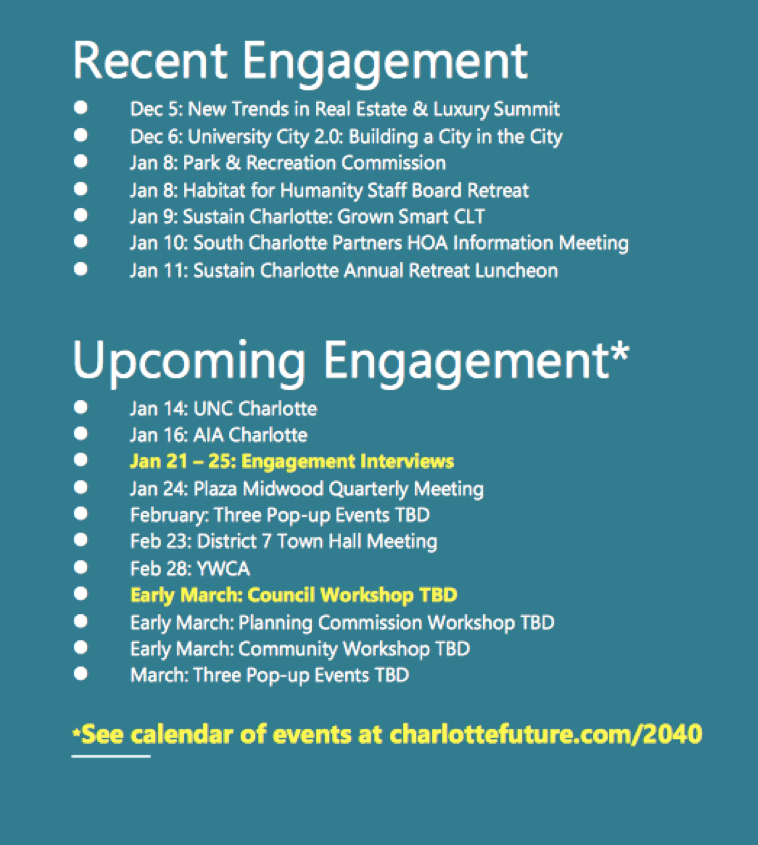 We want to thank Council Member Tariq Scott Bokhari for regularly attending the Transportation and Planning Committee meetings.  Even though he is not on the committee, he takes the time to educate himself on important transportation issues. We understand the Committee members are busy, but we encourage cross pollination and information-sharing on critical issues like e-scooters and Vision Zero.

Just as a reminder to you and Council, the Transportation and Planning Committee meeting streams live on Facebook.  Click here to see the full presentations from staff.