As Program Director at Sustain Charlotte, I love the opportunity to visit other cities during conferences to see how they're solving their transportation challenges. Join me as I share a few key takeaways from my recent trips to Los Angeles and Denver.

There's nothing sweeter than the smell of a freshly painted bus lane!

More people will choose to ride transit if travel times are fast and predictable.  When I visited Denver in mid-September for the Rail~Volution conference, the paint was barely dry on the city's very first bus lane. In a recent Streetsblog Denver article, project manager Kristina Evanoff said, "It's about the reliability of transit, but also to prepare us for the future."

As a daily bus rider here in Charlotte, I would like to see CATS and the Charlotte Department of Transportation (CDOT) work together to identify areas where buses are frequently slowed by rush hour traffic congestion. Particularly in areas with high bus ridership, bus lanes could be implemented to significantly improve travel times! 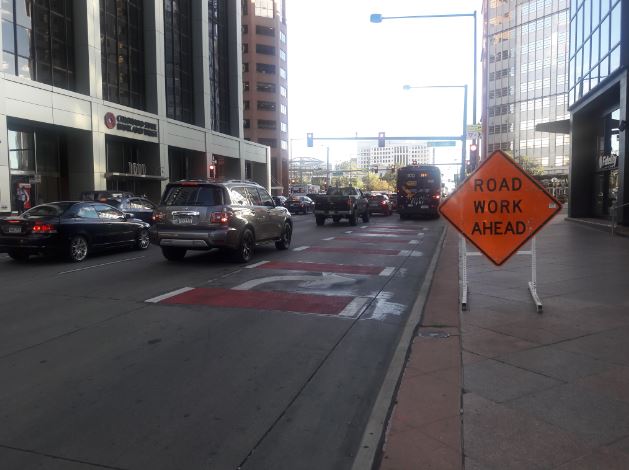 The scene below is near Los Angeles' Lincoln/Cypress Station on the Metro Gold Line. It doesn't look like a very pleasant to walk to transit stops, right?  While I was in LA for a Transit Center walkability workshop, I had the pleasure of touring this area that has been transformed by the nonprofit LA-Más. 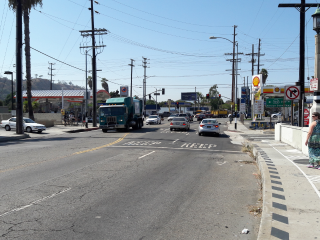 With gas stations on all 4 corners, this intersection was ground zero for an intervention!

LA-Más' Co-Executive Director Helen Leung led a walking tour and explained how her organization worked with city, county, and state agencies to prioritize improvements including fencing, landscaping, crosswalks, signage, and seating for their Go Ave 26 project. 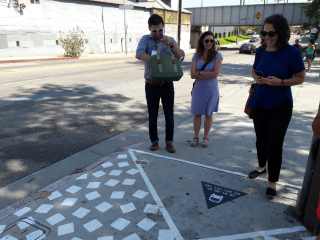 Colorful pavement paintings point the way to the nearest bus stops, by route! 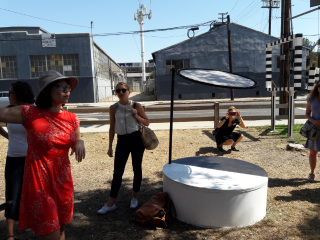 The need for walkable transit stops is universal.

While in LA, Emilia Crotty of Los Angeles Walks and I co-led small group bus stop walkability audits. We've both used them with residents in our respective communities (#Walk2Transit here in Charlotte) because we recognize that they're a powerful tool to not only gather data in a community-centric way, but also to raise awareness about the need for walkability among residents, elected officials, and agency staff.

During this short exercise, the small groups documented many challenges to walkability in downtown LA. We saw construction zones where bus stops had been removed, but no signage was installed to guide riders to the nearest available stop. Some bus stops were so close to the street that it was hard to walk past on the narrow sidewalks. 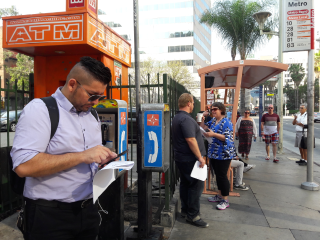 This bus stop in LA gets very crowded during rush hour and it's hard to walk past.

Streets should be for all people.

Does every lane of every street in an urban area need to primarily serve people in cars? What happens when city leadership is bold enough to re-create streets so they work for everyone?

I had to look no further than Denver's vibrant 16th Street Mall. This shady pedestrian promenade doubles as a bus corridor in the heart of downtown. Mall Ride buses run constantly, shuttling visitors and residents to work, shops, restaurants, and hotels. As I explored during my conference lunch break, I heard songs being played on public street pianos, saw elderly friends playing board games at a streetside cafe, and then hopped back on one of the frequent free Mall Ride buses to return to the conference venue. 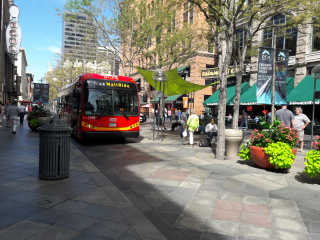 In Uptown alone, Charlotte provides dozens of lanes on our public streets to motorists. Public life and pedestrian activity is limited to the sidewalks, and people on bicycles often have nowhere safe to ride. Imagine how the city could be transformed if just one Uptown street was re-created for all people to truly enjoy!

Do you have a story of transportation inspiration from another city that Charlotte could learn from? Contact [email protected] and we may feature you in a social media post or guest blog!