We're excited to see the first proposed changes to the CATS (Charlotte Area Transit System) bus network! This first round of route changes is scheduled to roll out when the LYNX light rail BLE (Blue Line Extension) opens, currently scheduled for March 2018. These changes are the first phase of implementation for CATS' Envision My Ride initiative to redesign the bus network to better meet the needs of current riders and attract new riders. At their June 28 meeting, the MTC (Metropolitan Transit Commission) voted to approve this Bus-Rail Integration Plan.

When the original LYNX Blue Line opened on a weekend in 2007, bus route changes were rolled out on the following Monday. A similar plan will be implemented for changes to bus routes that connect with the BLE. A map of the proposed changes is available at the bottom of the Envision My Ride page. On that page, you can also view a short presentation of approved changes to bus routes that have already been implemented. 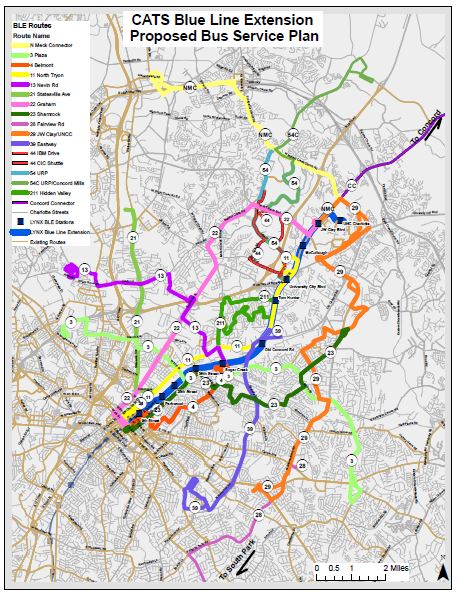 Proposed changes to bus routes for the BLE opening

CATS is working with CDOT (Charlotte Department of Transportation) to improve conditions for transit riders, most of whom reach their stops on foot. This is a critical part of the bus network redesign because as CATS makes bus routes more direct to improve frequency and speed of service, they will in some cases have to move service out of neighborhoods and onto major streets.

Think fewer wiggles and more straight lines. Riders who may need to walk farther from their neighborhoods to reach bus stops will need safe and inviting walking infrastructure like sidewalks, crosswalks, refuge islands, and crossing signals. Learn more about how Sustain Charlotte is supporting walkability for transit riders through our Walk2Transit initiative. 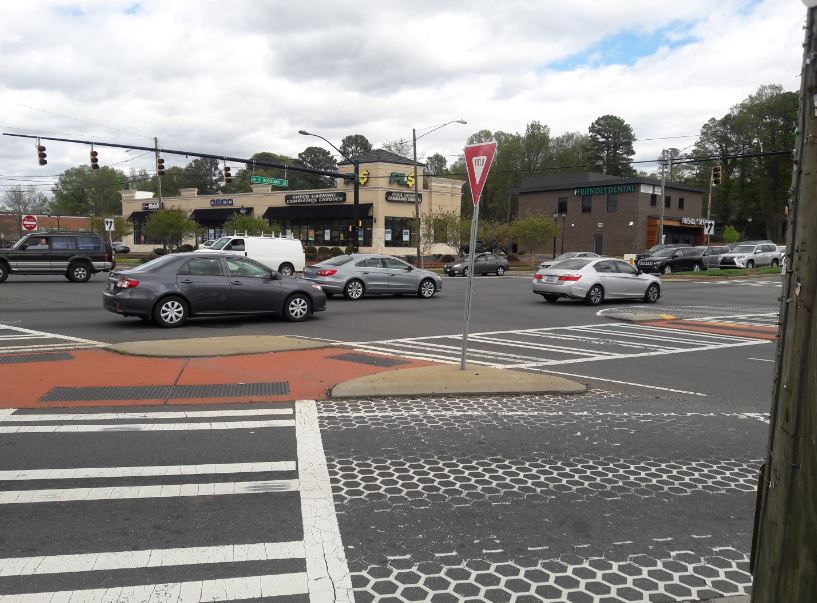 Some CATS bus routes stop running in mid-evening.  Some crosstown routes run only once an hour. Many don't run on Sundays. Needless to say, this can cause great frustration for riders who miss their bus by just a few minutes. Or have to work late. Or need to run errands/work/visit loved ones on weekends.

Mayor Roberts, who also chairs the MTC, asked CATS Chief Operations Planning Officer Larry Kopf if the proposed Concord Mills shuttle would run late enough for people who had to work after the mall closed because she had heard from retail employees that they would like to be able to take the bus. Mr. Kopf replied that staff could look at the schedules and determine if a later run is needed.

We're glad that CATS is being responsive to the mobility needs of businesses and employees who rely on public transportation! Frequent and reliable transit service is key to helping Charlotte's economy grow by ensuring all people have access to sustainable, affordable transportation to their workplace.

Major transit study about to begin

At their June 26 meeting, Charlotte City Council awarded a $3.2 M contract to WSP USA Inc. to complete the 18-month LYNX North and West Corridor Alternative Analysis and Center City Integration Study. There are two major parts of this study:

1. Define the rapid transit alignments for the North and West Corridors. Finalize the modal technology (i.e. Light Rail, Commuter Rail, Streetcar, etc.) for both corridors. Since Norfolk Southern has not been able to reach an agreement that would allow CATS to operate commuter rail on its tracks north of Charlotte towards Mooresville, CATS needs to explore alternatives to bring rail service to the rapidly growing communities north of Charlotte. For the West Corridor, CATS will explore the possibilities of alignments along West Boulevard and Wilkinson Boulevard (although the study area also extends farther south towards Tyvola Road) and will also consider extending service beyond the airport to the future River District development.

2. Update how the corridors will integrate with the existing LYNX Blue Line, CityLYNX Gold Line, and bus services, including the future Charlotte Gateway Station and LYNX Silver Line. Provide preliminary cost estimates to build the remaining 3 rapid transit corridors in the 2030 Transit Corridor System Plan. A network is only as strong as its weakest link. As the CATS network expands, excellent connections within and through the Uptown area will be critical. This study will consider pros and cons of various approaches, and will make a recommendation for how to connect existing and future facilities and routes.

How can I get involved?

There will be public input opportunities for both the Envision My Ride process and the Corridor/Uptown Integration studies. We'll announce these in our weekly e-news and on social media, so be sure to follow us!

Why not come to an upcoming MTC meeting to see how transit planning decisions are made? The MTC is the governing body of CATS. MTC meetings are held on the fourth Wednesday of each month at the Charlotte Mecklenburg Government Center (Room 267) at 5:30 p.m. There will be no July 2017 MTC meeting. You can view minutes, agendas, and the meeting schedule here.