On Wednesday July 17th, we hosted our 3rd annual Youth Quake Transportation Fair and it was yet again... a resounding SUCCESS! The fair was organized in partnership with the Progressive Baptist Church’s summer camp, YouthQuake. 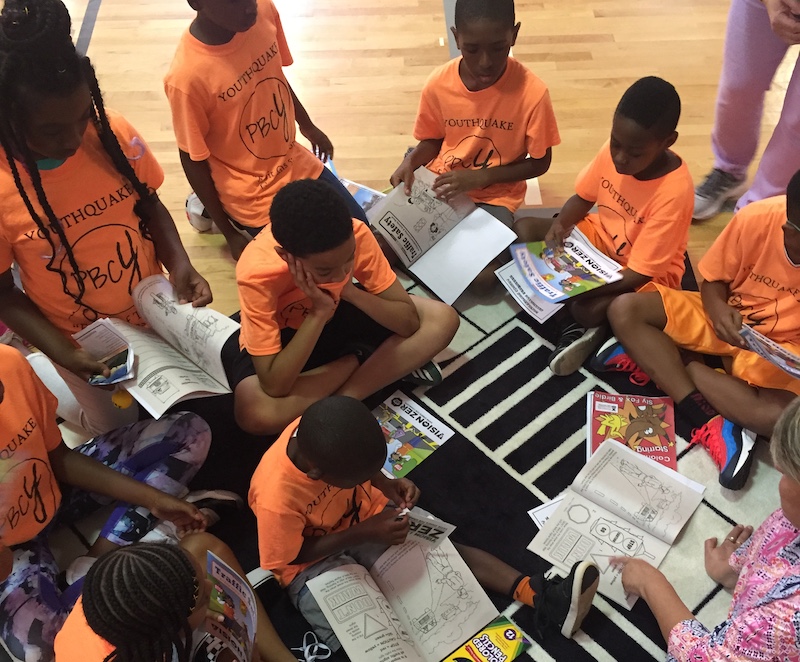 We welcomed over 90 YouthQuake campers aged 6 to 15 to learn how transportation would benefit their community, health, and most importantly, their safety.

Governmental departments and nonprofits from all over the city graciously accepted our invitation to conduct the learning sessions. They came to Arbor Glen Outreach Center and shared their knowledge and expertise with the next generation.

Over the course of two hours, the campers rotated between six different stations to learn about sustainable practices. The stations were set up to provide an experiential edutainment approach to help the children and youth better understand the challenges at hand.

LUESA’s Stormwater Division set up a dynamic demonstration of how pollution- from litter, vehicles, and other sources- affects the health of streams and other waterways.

Catawba Lands and Conservancy organized an exciting thread trail activity to show the campers how long it would take to break down different items of trash along walking or hiking trails.

Mecklenburg Air Quality assembled a smog tank activity to demonstrate the impact of everyday activities on air quality in cities, counties and town, using Mecklenburg County as an example. 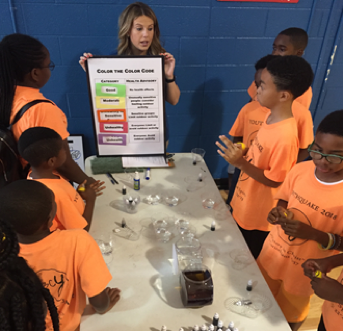 CATS used another approach and played a “transit Jenga” trivia game to check campers’ knowledge about transportation around the city. It proved very popular with the younger and older children. 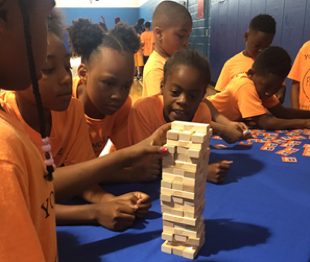 Mecklenburg County Park and Recreation also followed the gaming approach and assembled a bingo game of Greenway Etiquette and Facts. Skittles were used as markers, which our campers could nibble on during the game. This really motivated them to participate in the game and winners were sent home with great prizes! 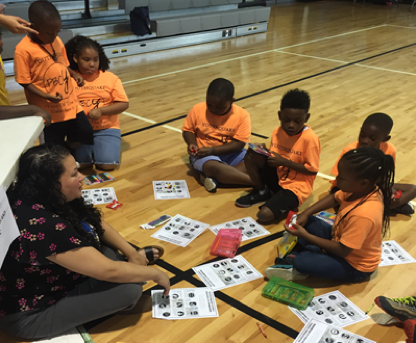 We know that sitting still for two hours isn’t easy for most kids, so Sustain Charlotte combined exercise and traffic safety education by facilitating a classic transportation-related childhood game: Red Light Green Light. The campers had so much fun that they didn’t want to stop playing and even asked if they could play again after the fair!

CDOT conducted a virtual reality experience, complete with goggles and a digital streetscape. This station proved to be one of the most popular ones, especially with the older teens. The activity gave them a first-hand experience of how to be safe as a pedestrian. 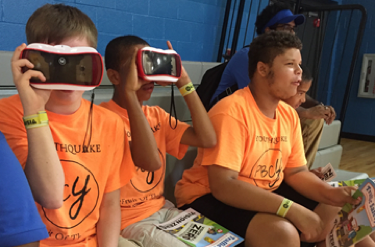 The campers learned a lot at the Fair and were excited to take home their learnings and educate the people around them about how they can make a difference!

We at Sustain Charlotte want to thank our volunteers and our partners for their great support on the ground and for donating their time and energy to ensure the event was a big success for all. We couldn’t have done it without them!

This event is another example of how together, we are making a Charlotte a sustainable and low carbon city by 2050.

Sustain Charlotte’s partnership with the West Boulevard community is supported by Wells Fargo and the Aetna Foundation.