Two Huge Steps Forward for Two of Our Transportation Campaigns!

Visible. Big. Iconic. If you were asked to describe current bike facilities in Charlotte, these probably aren’t the first words that would come to mind. But thanks to the thousands of you who have signed our #iBikeCLT petition and made your voices heard at public workshops, Charlotte Department of Transportation (CDOT) has recommended a protected bike lane that will provide much needed connectivity through Uptown!  The future for pedestrians, cyclists, and transit riders on Parkwood Ave and The Plaza also looks much brighter thanks to new CDOT recommendations resulting from more than a year of advocacy by residents and Sustain Charlotte.

In fact, bike and pedestrian issues dominated the conversation at City Council’s Transportation and Planning (TAP) Committee meeting on Monday.  Here’s a run-down and our take.

Charlotte's Bicycle Program Coordinator, Ben Miller, summarized the new Charlotte BIKES draft plan. According to Miller, public input sessions have revealed a strong preference for physical separation between bicycles and cars. “We know that for most of our residents, they’re going to need more than a stripe of paint to be comfortable on our city streets.”

Parkwood and The Plaza Recommendations Approved

More good news! After the bike plan update, CDOT’s Dan Gallagher presented the final recommendations from their Parkwood Avenue and The Plaza Findings Report.  After a year of study and engagement with the community, and in response to the petition we helped the adjacent neighborhoods create and present to City Council, CDOT is recommending a road diet on Parkwood Avenue, which would include separated bike lanes and a slew of design changes that would make it safer for pedestrians.

Although CDOT is not recommending a road diet on The Plaza, as requested in our petition, they are recommending the installation of one hybrid pedestrian beacon, new crossings, and increased lead time for pedestrians to cross safely before cars begin moving.

Committee Vice Chair Kinsey (District 1) voiced support for moving the project forward:  “Let’s do what we can with what we have to spend to address these issues.”  She also highlighted the safety benefits of implementing the recommendations: “Vision Zero is a great [standard] that we ought to be supporting.”

Committee Chair Vi Lyles (At-Large) reminded the Committee that implementation of any improvements will depend on future Council budget decisions.

We are excited to see the Committee unanimously advance these recommendations to the full Council.  While we would have preferred a road diet for the entire corridor, as requested in the petition, we emailed the committee members with a request to support CDOT’s recommendations and allocate funds for these improvements as soon as possible.

We also encouraged the committee to allocate the funds needed to implement staff’s recommendations for the other four corridors currently being studied as soon as those studies are complete.  Creating a realistic funding plan to implement recommended improvements on all of these corridors (South Blvd, South Tryon, West Blvd, and Eastway) will reduce traffic related fatalities and serious injuries in these parts of our city, and honor the city’s recent commitment to Vision Zero. Discussion among the committee members also underlined the need to better understand how the corridors are prioritized for study. 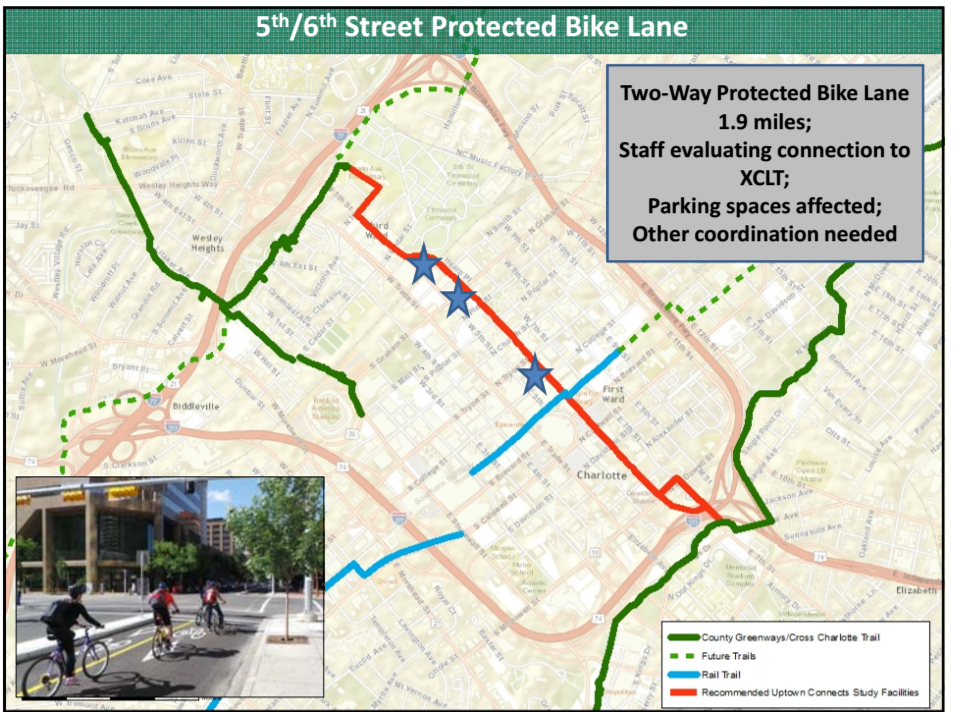 You spoke. CDOT listened. At the two Uptown Connects public workshops, CDOT said the comments they received could be distilled to a clear message:

More than 4,000 Charlotte area residents have signed our #iBikeCLT petition asking for a protected bike lane connecting Irwin Creek and Little Sugar Creek Greenways. At Monday’s meeting, CDOT’s Vivian Coleman revealed exciting recommendations to meet the needs that you and so many others have requested.

Here’s what we are excited about:

Council Member Smith (District 6) recognized the value of good bike infrastructure: “The economic pitch is one that’s not lost on me.” He cited how Park Road Shopping Center’s back lot has blossomed with successful businesses due largely to its proximity to the Little Sugar Creek Greenway. However, he also expressed concern about giving a vehicle lane to people on bikes.

In response, CDOT Director Danny Pleasant emphasized that all possible routes for the protected bike lanes were thoroughly studied. Out of that process, 5th and 6th Streets emerged as the clear winners. Since neither of these streets connects all the way through Uptown, they’re largely used by people who are accessing specific destinations or looking for parking.

Council Member Phipps (District 4) spoke of how impressed he is by cycling infrastructure advancements undertaken by peer cities and countries around the world. He asked if the Uptown area would be enhanced with additional bike parking and other amenities for cyclists. Phipps noted that in many other cities, “people use bikes as a necessity rather than recreation and it is treated like serious infrastructure.”

As a city, we have much work to do to catch up to our peer cities in terms of cycling and pedestrian infrastructure.  On your behalf, we will continue to ask Council to fund these recommended projects to help make Charlotte a world-class, competitive, and equitable city.

It’s so fulfilling to see how your unified voices and commitment to safe infrastructure for people on foot and on bike has led to these recommendations. Come help us celebrate this big step forward at our next Monthly Mixer on April 12!