Sustain Charlotte staff wrote a letter in support of more funding for pedestrian, bicycle, and transit projects. We invited all individual and organizational members of the Transportation Choices Alliance to sign it, and submitted the joint letter below on July 31.

**Click here to read the CRTPO's response to these comments.** 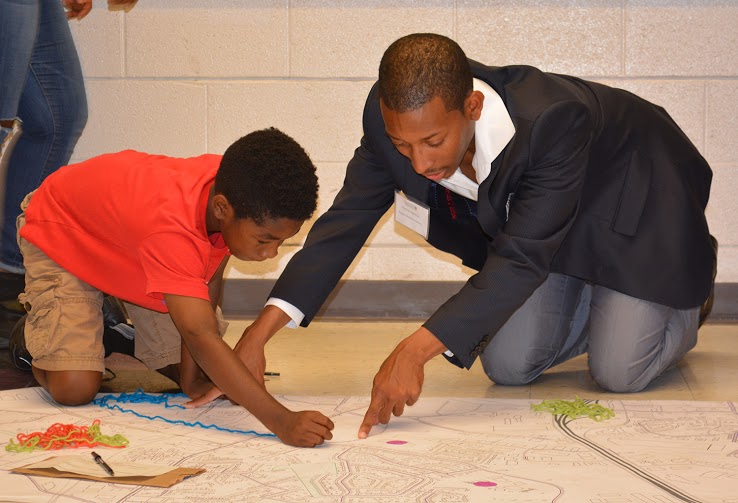 When we educate residents about the impact of our area's sprawling land use patterns and transportation habits, we usually share the statistic that the average Mecklenburg County household spends 26 percent of their income on transportation costs, much more than the national average of 19 percent (learn more in our 2014 Charlotte-Mecklenburg Sustainability Report Card).

But for teens who have never been behind the wheel, that's a very abstract idea. Last Friday, we created and facilitated a game to bring this statistic to life. 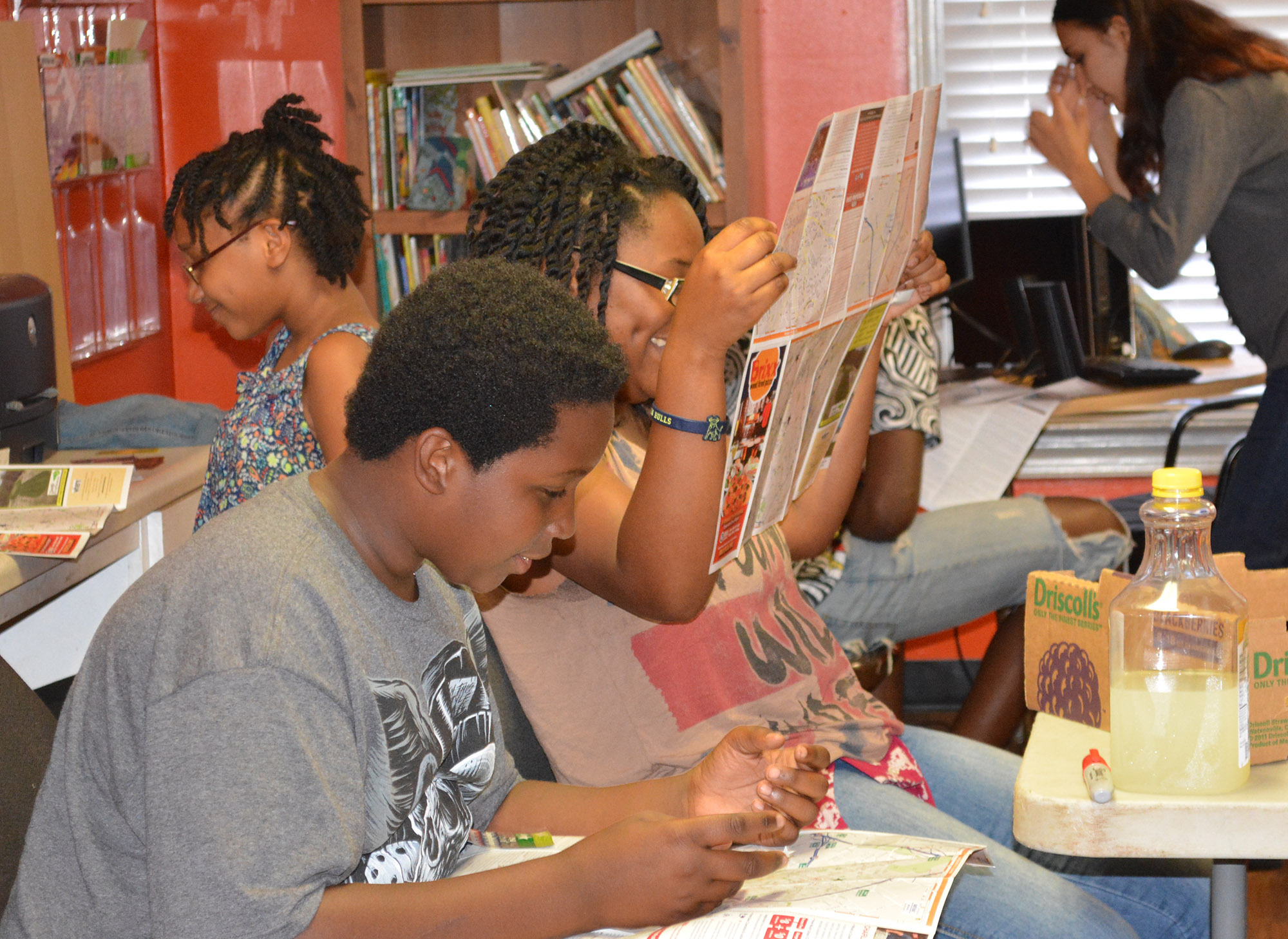 "Slow Down. Children Playing in Neighborhood."

Those were just a few of the messages written by youth during last week's workshop at Arbor Glen Outreach Center in West Charlotte. Over the past year that Sustain Charlotte has worked with residents in the Reid Park neighborhood, we learned that their top sustainability concern is a lack of safe and connective pedestrian and bicycle transportation infrastructure for residents. This includes crosswalks, sidewalks, speed bumps, and bike lanes. 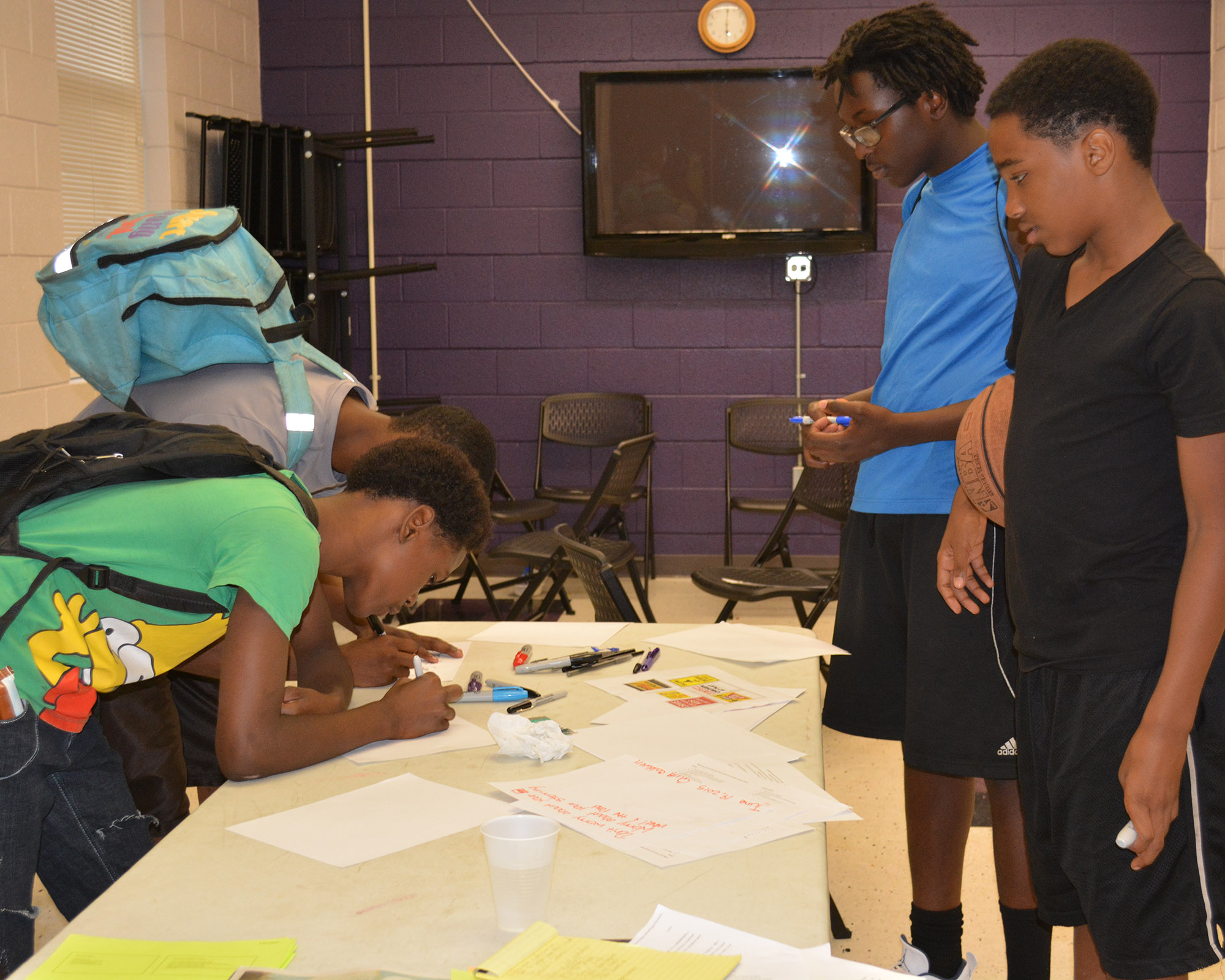 Youth from Reid Park and the surrounding neighborhoods gathered at the Arbor Glen Outreach Center last Friday evening to do something about this problem.

It's official, the City LYNX Gold Line streetcar is scheduled to open July 14!

In light of yesterday's announcement that the CATS City LYNX Gold Line is scheduled to officially open on July 14, we wanted to highlight the many benefits we believe this new system will bring to the city of Charlotte. The following information has been gathered from our May 2013 report, Go for the Gold: Why Streetcars Are a Win for Charlotte.

The report discusses the background of Charlotte’s streetcar project, as well as the expected economic, social, and environmental benefits. The benefits of existing streetcars in three other cities are profiled as well as how planned streetcars are being funded in four additional cities. Some key facts from the report include:

Transportation and Poverty: What's the link?

Mecklenburg County is the second worst large U.S. County for upward social mobility of children born into poverty. Yet, Charlotte has the second fastest population growth among large U.S. cities. This is very troubling. Even as our metro area attracts unprecedented growth, our own children are slipping further and further behind the rest of the nation. And it's not just children born into poverty. Even children from average and upper income Mecklenburg households lag the national average in annual earnings when they become adults. 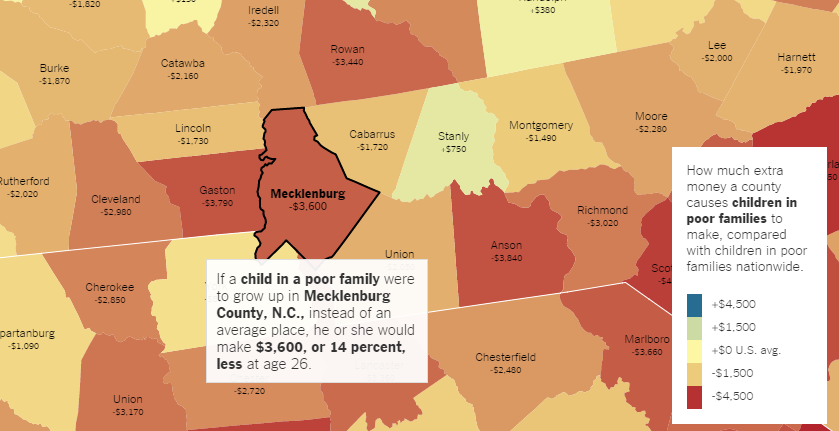 Transportation certainly isn't the only factor that determines economic mobility, but it is incredibly impactful. An article in today's NY Times titled "Transportation Emerges as Crucial to Escaping Poverty" reports that the impact of transportation on social mobility is stronger than several other factors, like crime, elementary-school test scores or the percentage of two-parent families in a community.

The study emphasized the strong link between availability of public transit and income. The researchers compared neighborhoods by accessibility to mass transit and the number of jobs within an hour’s commute. Residents of the areas least well-served by mass transit relied on personal vehicles. Areas in the middle third — those with some, but insufficient, access to transportation — had the highest rates of unemployment and the lowest incomes, the study found.

The problem is, it's not always an easy task to raise public awareness of the tightly interwoven links between transportation and quality of life.  In my outreach role for Sustain Charlotte, I'm often asked to identify the most critical sustainability challenge that Charlotte neighborhoods are facing. I often see puzzled looks when I answer, "Transportation." The well-intentioned asker of the question often follows up with a variant of: "But aren't they facing...you know, more urgent challenges like safety, or poor health, or poverty, or polluted streams?"

The $75 million the Charlotte City Council approved in 2014 to fund half the cost of constructing Phase 2 of the City LYNX Gold Line is being threatened. Due to City budget shortfalls, some Members of City Council are suggesting the $75 million they already approved for the Gold Line be cut from the budget. However, these funds are required for us to obtain a matching federal grant of $75 million to cover the full cost of Phase 2. Without these funds, we will not be eligible for the $75 million grant that is included in President Obama's recommended budget for fiscal year 2016.

A public hearing on the City budget will be held this coming Monday, May 11th and Council will cast their vote on June 8 so we need you to act NOW!

This $75 million for Phase 2 of the Gold Line was approved by City Council due in large part to the 2,593 signatures we received for our petition to "Bring the Streetcar to Charlotte's struggling neighborhoods" back in late 2013. It is important that you show your support for this critical investment in our city. With your voice, we will ensure the City Council remains committed to this project and takes advantage of the opportunity to receive a dollar for dollar $75 million federal matching grant to complete Phase 2! 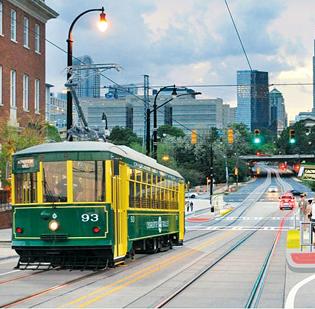 Continue reading to learn how you can show your support NOW:

"People young and old all joined together and recycled, built green homes and started using less cars for the roads. I just see bikes and happy healthy smiling people walking and exercising at all the newly made playgrounds. That's one small step for a neighborhood and a big leap to an energy efficient country". This is the vision 17 year-old Imani created for her Arbor Glen neighborhood in the year 2040. It's a powerful vision, and it's achievable. In fact, we loved this vision so much that we read it aloud to Mecklenburg County state legislators the following morning! 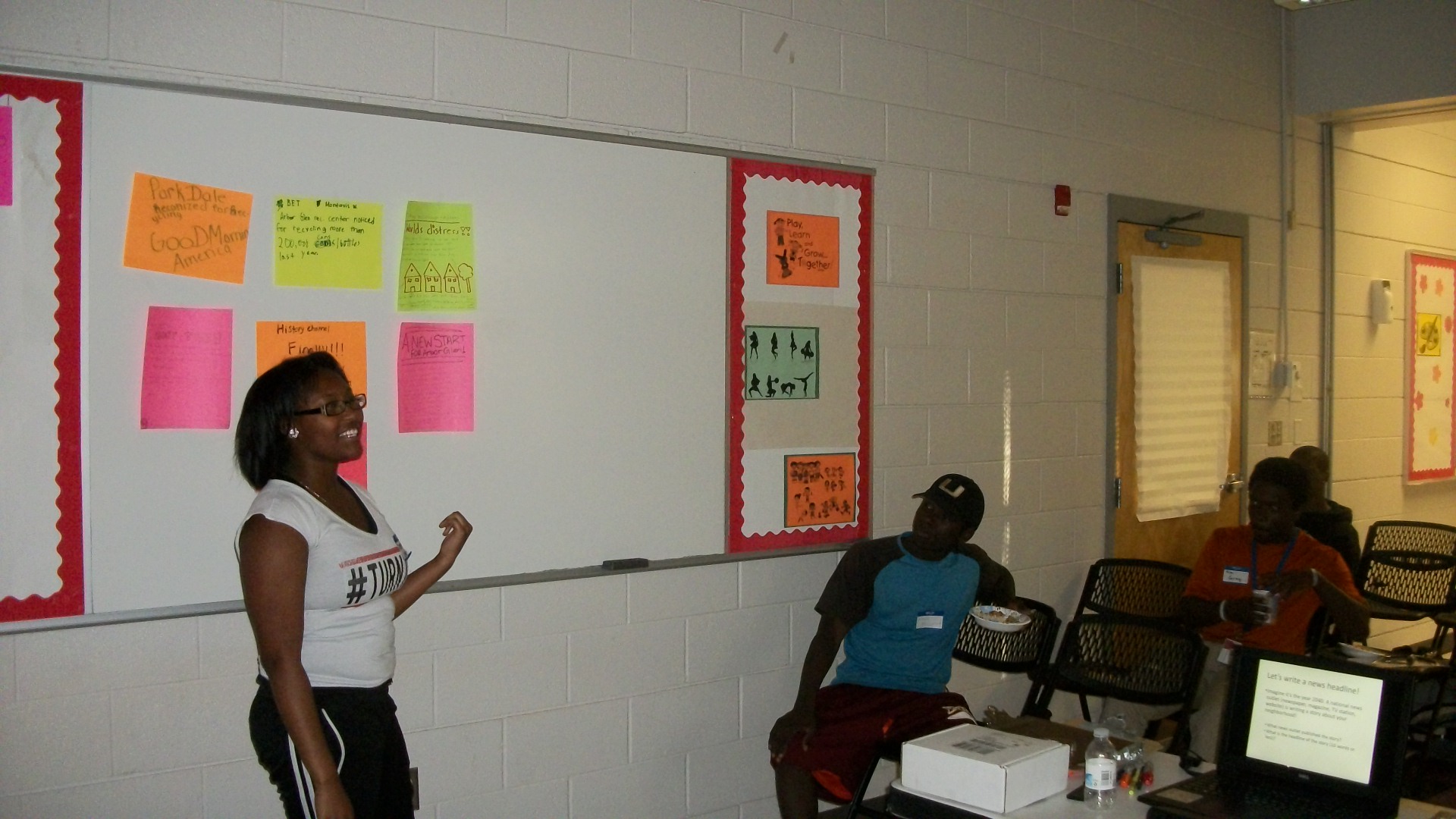 Youth created and shared 2040 neighborhood visions with their neighbors.

We began by asking a simple question: "How would you define sustainability?" All of the youth said they've heard this word before, but their answers showed that they didn't have a firm understanding of it:

"I would define sustainability as in controlling something."

"Maintaining the same in the neighborhood."

And my personal favorite: "By using a dictionary"

State Representative Becky Carney recently organized and hosted the very first public listening session of Mecklenburg County state legislators. On Friday, April 24, County residents spoke directly to legislators about their needs and concerns. We took the opportunity to speak up for the future of Mecklenburg County's sustainable transportation network of light rail, commuter rail, buses, and infrastructure for safe, well-connected biking and walking. It was a fantastic opportunity to share our concerns with policymakers, so we hope to see many more listening and dialogue sessions in the future!

At Monday evening's public comment period to Charlotte City Council on the University City Area Plan (UCAP), Sustain Charlotte announced that over 200 residents had signed our petition. The petition asks Council to approve the UCAP, but also add corrective rezoning to transit-oriented development (TOD) within 1/4 mile of Blue Line Extension (BLE) stations in University City.  We hand delivered our petition with 194 signatures to City Council, Mayor Clodfelter and the City Manager during the 7:00 meeting, but we were thrilled to see that the number of signatures exceeded 200 just before we addressed Council! For more background on the UCAP and our involvement in it, check out our recent blog post. 15 residents registered to speak on this issue. 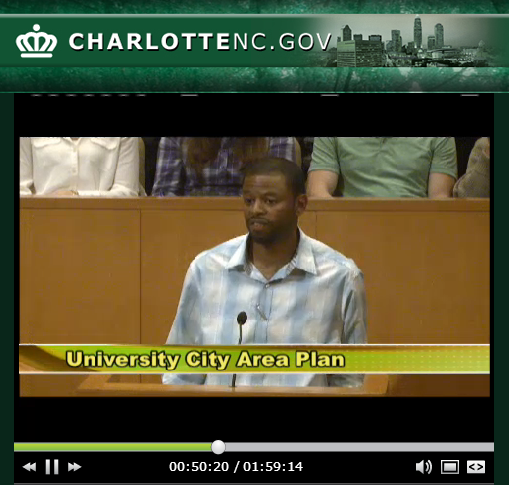 Russell urged Council to "fire up the engines of creativity to propel us to a vision of a safe, efficient, and vibrant land use plan." Watch his full testimony (begins at 50 minutes 01 seconds). You'll need to first scroll down and then click on the word 'video' for the April 13 meeting under 'Archived Meetings'. When the video window opens, grab the gray circle with your mouse/point and move it horizontally to 50 minutes 01 seconds.