Here are the comments that Sustain Charlotte submitted to the Charlotte Department of Transportation as part of the City's Streets Map public input process:

Our participation and contributions to both the UDO and Streets Map committees has been very exciting. We believe this work is of the utmost importance to the future of the city. While progress may be coming, we must stress the urgency and importance of this opportunity we have before us. How our urban streets are designed greatly impacts the rest of the urban fabric.  Sustain Charlotte will be asking and advocating for the items below to be included in the Streets Map, Bicycle Network and the UDO plans.

Right size the Number of Lanes/Cut Out Extra Lanes -

Perform lane audits for streets to determine if demand is correct for the current number of lanes. Streets with fewer than 1,000 trips at peak hour or about 10,000 trips per day need only two lanes. Adding a center turn can double that capacity. This may not apply to most of our busy streets but if such streets do exist let’s make the best use of that space for protected bike lanes or sidewalks.

Having the right priority and setting the correct goal is key. How engineers approach a study or examine the outcome of a model is subjective. Their attitudes and prejudices can carry through and shape the decision. We ask for the proper priorities to be used when studies and models show a negative impact on the flow of cars or other auto-centric metrics. When it comes to our urban streets the level of service should be keeping the most vulnerable safe.  Slower posted speeds, streets designed to be slower and removing the goal of solving/reducing congestion are needed.

Dendritic or branching street design methodology needs to be phased out in all urban areas. This calls for a redesign of street types for Charlotte’s Streets Map. Collectors and Arterials must be redesigned to become safer multi-modal streets with an overall porous urban grid network that divides traffic paths out instead of collecting them into one path from origin to destination.

Road Diet All of Our Four Lane Streets in Urban Areas -

Use the reclaimed asphalt for on-street parking, bike lanes/sidewalks. Center lanes should not be continuous turn lanes but instead, contain larger trees to complete the street tree canopy.

Related to the above-mentioned road diet, adding a center turn lane makes the street safer but should not become an overused option on every street or for the entire street. Overextending the length of turn lanes can reduce the on-street parking. This lost of parking hurts retail businesses and if conventional bike lanes are used properly, take away the critical bike and pedestrian buffering.

10-foot travel lanes for all streets at 45mph or less. This approach needs to happen as a separate workgroup to identify all opportunities within the city. TOD areas could be worked first. The opportunity for the “free asphalt can’t be missed. The leftover roadway can be repurposed into bike lanes and on-street parking.

Continue the good work of pilot projects which led to great permanent facilities. Future ideas and projects we would like to see include:

The goal we are asking CDOT to adopt for improving Charlotte’s cycling network is to primarily focus on low-stress routes, largely separated from cars and trucks. Keeping in mind this is not asking for bike lanes on every street. It is a goal of safety in numbers with fewer routes that make the bike network useful and safe.

This Network will be made up of: (Organized from least to most stressful)

Work with the county to develop separated trails to be commuting corridors for cyclists. Dedicate at least 7 feet and no more than 10 feet for two-way bicyclist travel on major/busy corridors. Identify city-owned land or right-of-way that could become separated bike paths/trails.

First, let’s get our first of many Bicycle Boulevards built! When this happens it needs to have these five characteristics:

1 - It needs to be long in distance and calm to ride on as a cyclist.

5 - Clear way-finding signs and signalized for cyclists at major intersections; cyclists get the “green wave” or quick-response sensors.

Build more of this type of facility but provide the proper buffer. Adding flexibility to the proper type of design is more acceptable than replacing it for a conventional cycle lane design. See the below example from Washington D.C. It is the 15th St. cycle track with smaller two-way bike lanes, 7-foot wide parking spaces and a 3-foot buffer. 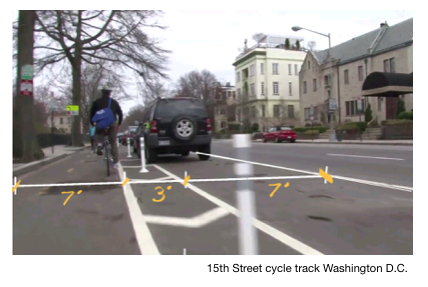 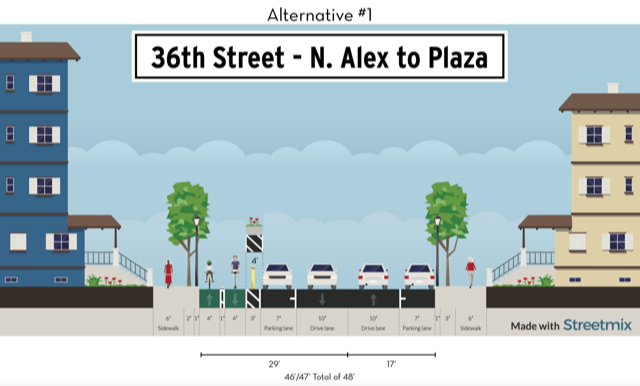 Placing this type of bike lane next to moving traffic is no longer accepted without a proper buffer. In cases where on-street parking exists or is needed, the bike lane is moved to the right of the parking spaces with an appropriate door buffer. 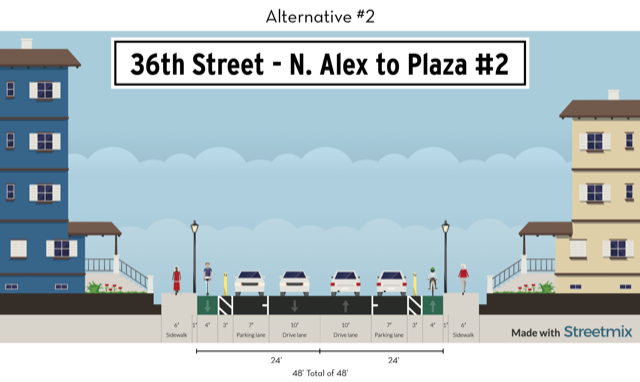 Any streets that consist of fewer than 300 trips during peak hour should be converted into Slow-flow streets. If these streets are wider than 32, they should be converted to 24 feet with parking on one side and 31 feet wide if parking is on both sides.

*Sharrows - Do Not Count as Official Cycling Facilities

We look forward to the continued support and collaboration on current and future bike and pedestrian projects. Sustain Charlotte’s priority of safer, high-quality bicycle and pedestrians facilities is very important to us and our supporters. We hope someday in the near future, Charlotte is leading other cities in world-class infrastructure and policies that provide a more sustainable future for all.