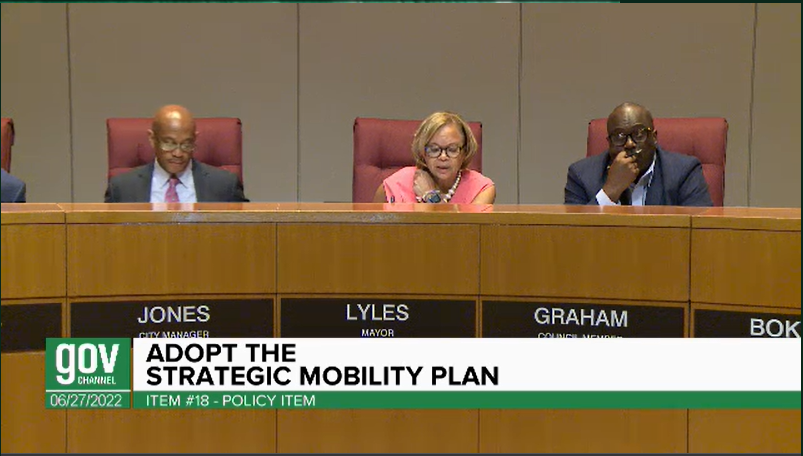 The Strategic Mobility Plan is designed to improve Charlotte's public transportation infrastructure to meet the needs of our growing population, make our city more walkable, and broaden our network of bicycle lanes. It’s been developed to address goal No. 5 of the Charlotte Future 2040 Comprehensive Plan: safe and equitable mobility. It refines policies and ensures that the investments Charlotte makes are fully in line with our city’s vision for growth.

Importantly, the Strategic Mobility Plan sets an ambitious goal of reducing the share of people driving to work alone from 76% to 50% by 2040. This will help Charlotte reach its goal of becoming a low-carbon city by 2050.

"We've been advocating for this goal since 2020 and are thrilled to see it endorsed by the Charlotte City Council," said Shannon Binns, Sustain Charlotte's founder and executive director. "This and other goals in the Strategic Mobility Plan will help Charlotte become a city that's less dependent on cars and is safer for pedestrians, cyclists, and transit riders."

Here are a few other fundamental changes outlined in the Strategic Mobility Plan:

The plan passed 9-2, with Mayor Vi Lyles encouraging council members to vote in favor of the plan. We thank those council members who supported the plan last night. We'll share a few of their comments from the meeting below.

Renee Perkins Johnson, District 4: "That's important that each district is considered in this priority funding from an equitable perspective. Furthermore, there's also a focus on microtransit and other improvements in District 4, which I think are so needed."

Dimple Ajmera, at-large: "This is a critical step for us in implementing sustainable neighborhoods and becoming a low-carbon city... It also helps us eliminate traffic fatalities and crashes that we have seen that have taken so many lives."

Greg Phipps, at-large: "It's a 20-year plan, but it's going to take maybe 20 years to change a culture, and that's the car culture that we have... It's got some lofty goals in it, but as a city, I think we should aspire to lofty goals."

Malcolm Graham, District 2: "The journey of 1,000 miles starts with one step, and I think the first step is to adopt the plan tonight... It won't happen overnight, but having a transit system that folks can rely on, putting resources in place that encourage different behavior is a positive solution as well."

Vi Lyles, mayor: "The plan is a plan that begins a process that talks about clean air, it embraces the (Unified Development Ordinance) and the plans we have for density and growth, and so I believe that this plan is very important to our future, and it's got a lot of work to be done, but it's also one that's regional... We've got to realize that we are the center that creates a number of opportunities for regionalism, and these steps are important as a part of our plan."

Braxton Winston, at-large: "This isn't a policy that is expected to be static. As things change, as we achieve and technology changes, we will have to adapt. But more importantly than that, this furthers the implementation of the 2040 plan... Let's embrace this new process of being a planning city and not just a dealmaking city."

Sustain Charlotte is committed to making our community one where anyone can travel safely and efficiently without using a car. The actions outlined in the Strategic Mobility Plan are essential to helping Charlotte reach its goals of eliminating traffic fatalities and serious injuries, providing transportation equity, becoming a low-carbon city, and maintaining economic competitiveness.

You can find more information about what the Strategic Mobility Plan means for cyclists here and for transit riders here.