Following a series of public meetings over the past year, CATS staff have determined two possible alignments for the future Silver Line light rail. These options are based on technical considerations as well as input from over 1,000 community members who shared their desires and concerns for the corridor.

Click here to see the area under consideration. At the June 22 Metropolitan Transit Commission (MTC) meeting, we learned that CATS has narrowed down the possible alignments from four options to two. Here's the area through which the Silver Line will run: 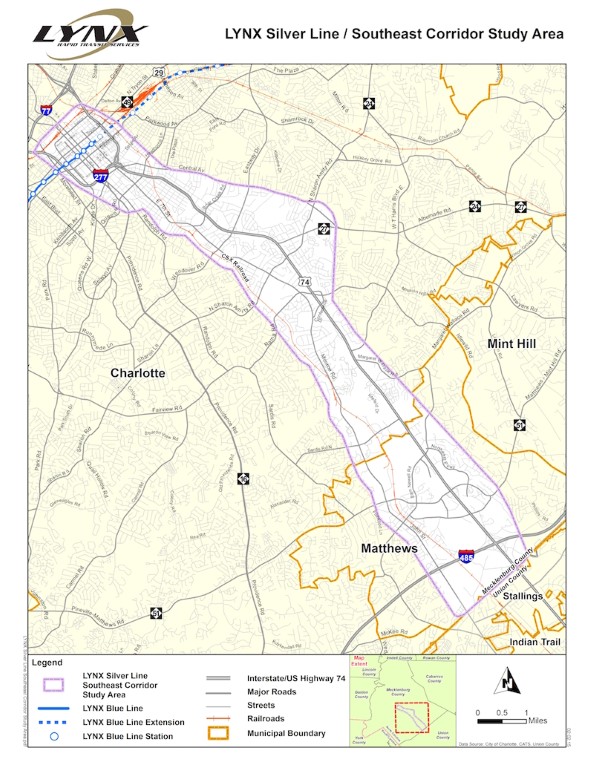 Study area for the Silver Line (image from charmeck.org)

Option A would take the light rail down an exclusive guideway along the side of Independence Boulevard between Charlottetowne Ave and Sam Newell Road, then in its own lane along Independence Pointe Parkway. There's also an option to connect to downtown Matthews with the "Sam Newell option".

Option B would start off the same as Option A near Uptown, running along the side of Independence Boulevard as it leaves the city. But east of Sharon Forest Drive, it would follow a new alignment through undeveloped property to Village Lake Drive. From there, it would run in the center of a widened Monroe Road through downtown Matthews and finally along the side of Matthew-Mint Hill Road.

Click here to learn more and see the options. As you'll see in the two infographics, CATS is taking several social and economic factors into account as they weigh the options:

CATS is also considering ridership estimates, cost estimates, and feasibility of providing maintenance facilities. Because the Silver Line will serve either downtown Matthews or nearby, the City of Charlotte and Town of Matthews will need to reach a consensus agreement on the alignment. There are some concerns among Matthews community members about the visual impact of the line in their downtown.

CATS staff will continue working on the alignment options, including plans for exactly how the Silver Line could run into Uptown. We look forward to an upcoming MTC meeting where we'll see a presentation of the recommended alignment that the MTC representatives will vote to approve. Once the alignment is confirmed, CATS will need to create a plan to secure funding for the project to be planned and constructed.

Here's what we're excited about:

Want to learn more about how transit decisions are made and actually see those decisions being made? Metropolitan Transit Commission (MTC) meetings are open the public. They're normally held on the 4th Wednesday of each month (but no meeting in July 2016) at 5:30 in the Charlotte Mecklenburg Government Center. Anyone can speak for 3 minutes at the start of each MTC meeting. Why not come and let your elected officials know that you support transit!