Pedestrians are dying at record numbers on U.S. streets. Who's most at risk?

The new Dangerous by Design report by Smart Growth America reveals some grim statistics about the upward trend in nationwide pedestrian fatalities. Not only are these fatalities on the rise, but they're also disproportionately killing people of color, older adults, and people walking in lower-income communities.

The Charlotte-Concord-Gastonia metro area ranked 33rd most deadly for pedestrians among the 100 largest metros in the United States. Within our defined metro area, 359 pedestrians lost their lives between 2008 and 2017. That's a fatality rate of 1.51 per 100,000 people.

On City of Charlotte streets alone (excluding interstates), a record high 27 pedestrians were killed in 2017. That record was again broken in 2018 with 28 fatalities.

The City of Charlotte set a Vision Zero goal in 2017 with the approval of the Transportation Action Plan. What would it take to have no traffic deaths or serious injuries in Charlotte by 2030? Along with taking action to improve pedestrian and bicyclist safety, it's also very important to understand the data about who is most vulnerable. Keep in mind that the data presented below is from the national Dangerous By Design report, and trends in Charlotte are slightly different. 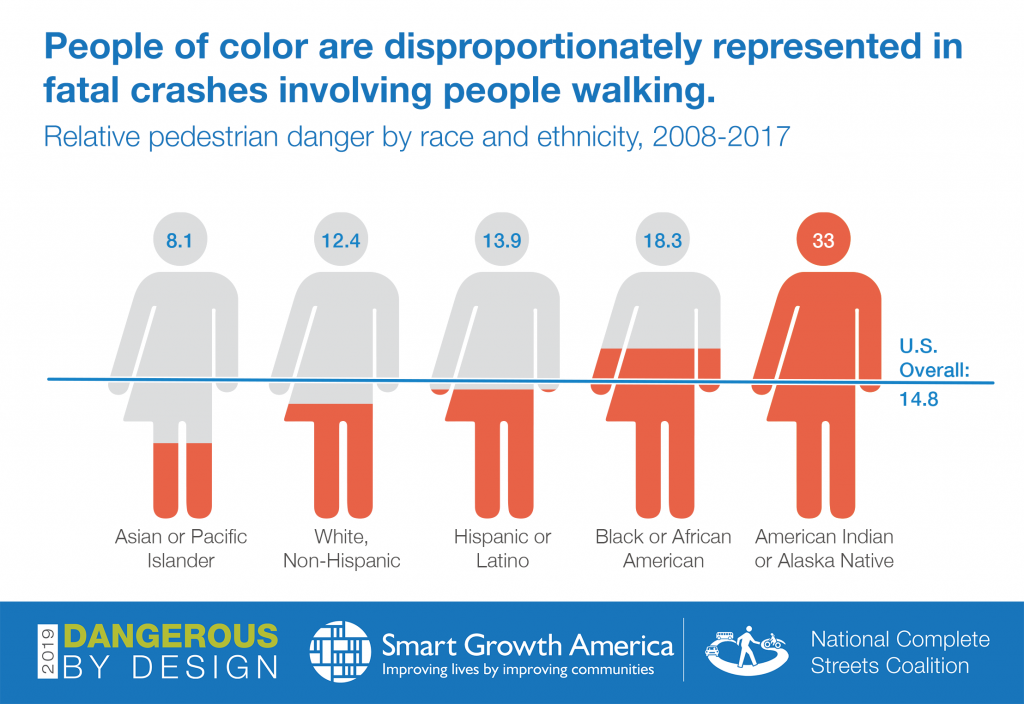 People of color are killed at disproportionately higher rates while walking (national data).

Older adults are at higher risk as pedestrians, too.  As people age, it's more likely that their hearing and vision will be less acute than when they were younger. That makes it more difficult to accurately gauge how close a vehicle is when they're deciding when to cross the street. Older adults may not be able to move quickly enough to dart out of the way of traffic. An incident that might be a "close call" for a young person could result in a fatal crash for an older person. 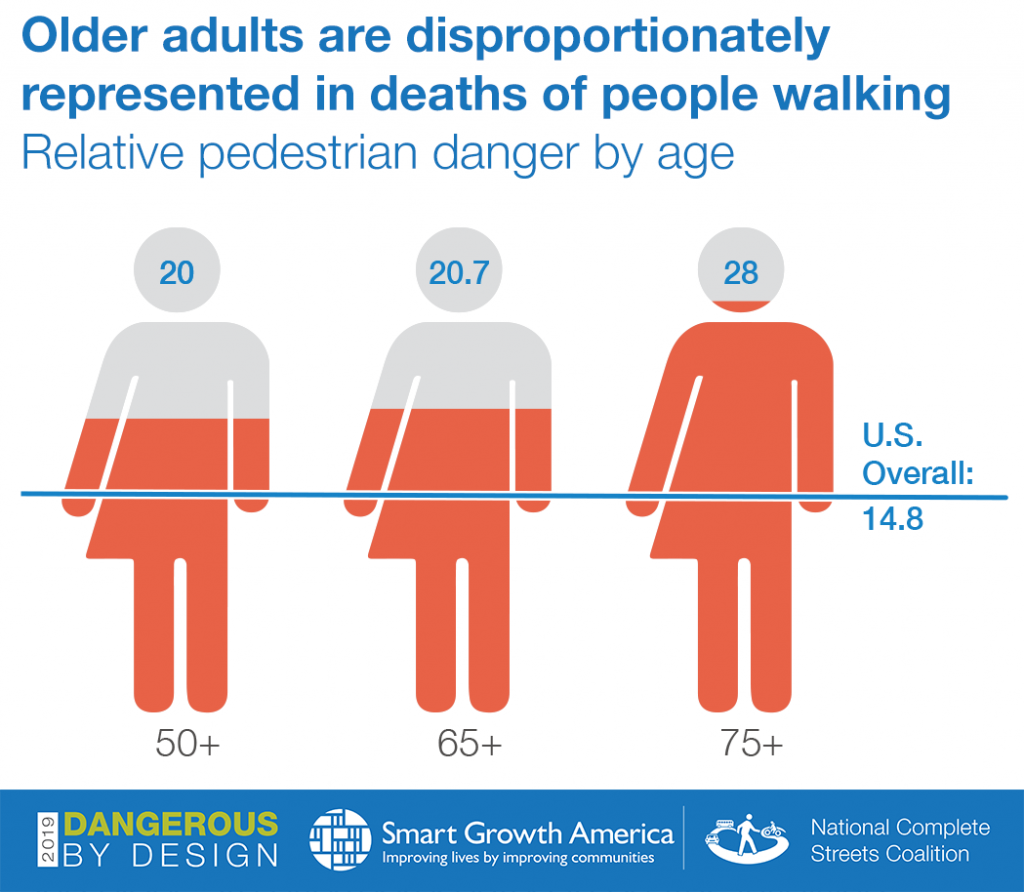 People over 75 years are at highest risk of death as pedestrians (national data).

The statistics get even grimmer when income is considered. As shown in the figure below, people walking in lower-income communities are at higher risk of being killed in collisions. Why? The answer may differ somewhat from one city to the next. Many cities have chronically under-invested in pedestrian infrastructure for lower-income neighborhoods relative to higher-income neighborhoods. This happened in Charlotte's past, and unfortunately it's often very more expensive and logistically difficult to retrofit a neighborhood with sidewalks and crosswalks if they weren't built originally. This means that even as the City invests more in lower-income neighborhoods, there is still a huge unmet need for more investment.

We also know that people in lower-income communities often have to rely on walking, bicycling, and riding public transit more often for their daily transportation. With that comes increased exposure to risk of being struck by a vehicle. We're glad that Charlotte recognizes this and has committed to Vision Zero for all who use our streets! 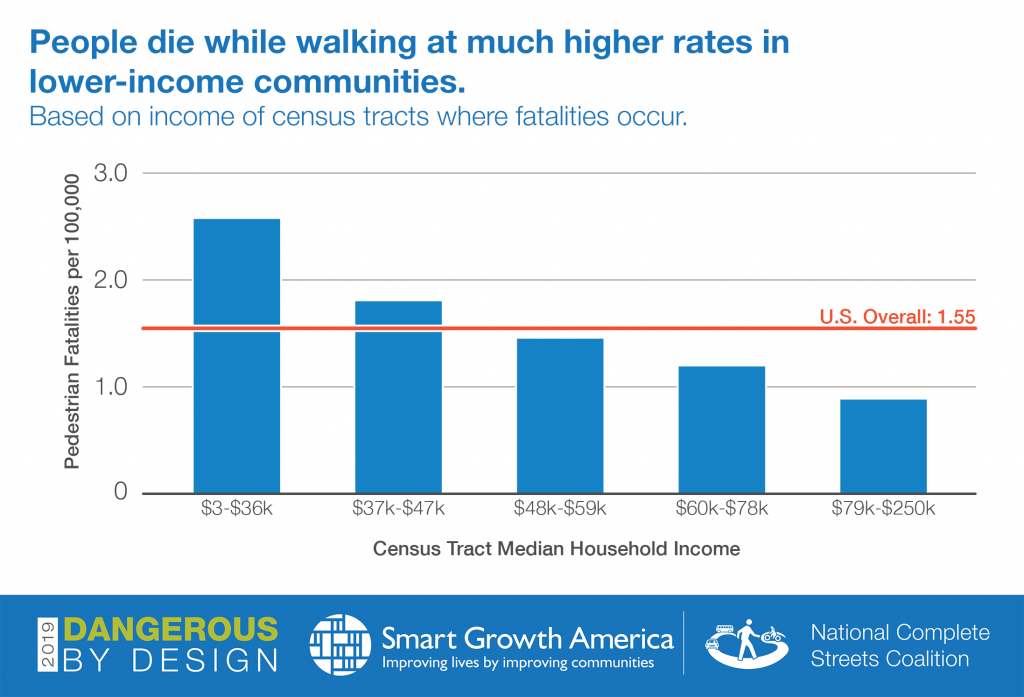 The City of Charlotte has undertaken a proactive effort to improve the "High-Injury Network", or places where people are killed and seriously injured in collisions at a higher rate than the average. We're already seeing more neighborhoods being approved for speed humps, intersection improvements, pedestrian refuge islands, signalized crosswalks, and more. Some of these neighborhoods previously didn't quality for improvements because the vehicle counts through the area weren't high enough, or for other reasons. This is changing with the City's new adoption of Vision Zero.

It will be important to continue prioritizing funding for projects that improve the safety of pedestrians, cyclists, and transit riders -- including those who are most vulnerable.