You've spoken up for safer bicycle facilities in Charlotte, and your voice is making a difference! More than 4,000 area residents have signed either our paper or online #iBikeCLT petition that we presented to City Council in July.

At the November 14 City Council Transportation and Planning Committee meeting, we heard an update from CDOT on the Uptown Urban Trails Connection Study. 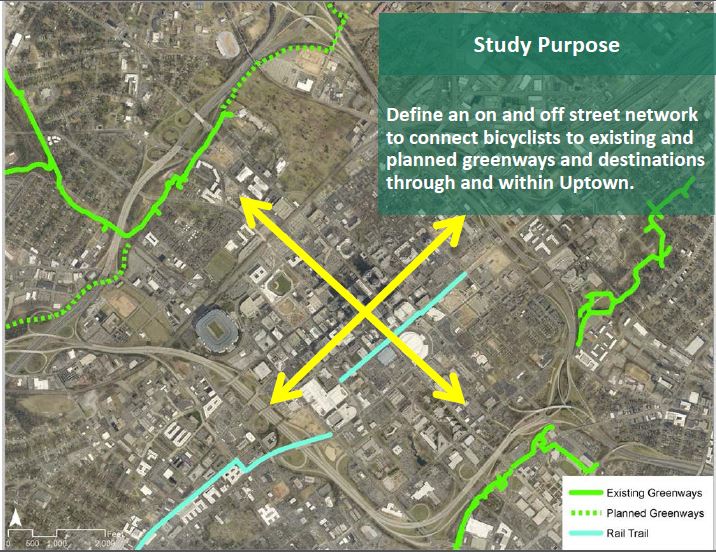 Click here to see the full presentation from the November 14 meeting. We were thrilled to learn that Charlotteans who attended an Uptown Connects workshop in September overwhelmingly want to see protected bike lanes in Uptown! 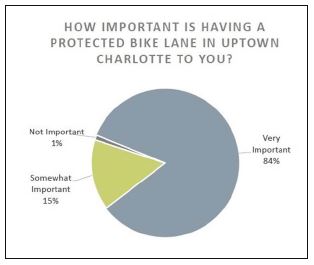 99% of workshop participants said a protected bike lane in Uptown is very (84%) or somewhat (15%) important. 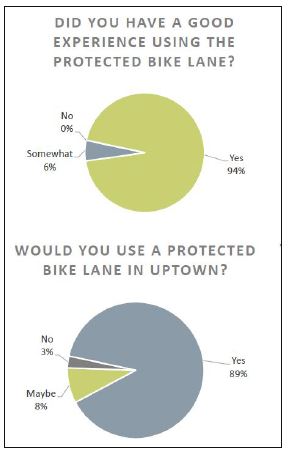 94% of workshop participants had a good experience on CDOT's demo protected bike lane. 89% said they would use one!

About 60% of current and potential cyclists fall in the "Interested but Concerned" category. They feel comfortable riding a bicycle on very low traffic volume neighborhood streets, greenways, rail trails, and other facilities where they're physically separated from motor vehicles. But they don't want to ride in in car lanes or in bike lanes that are separated from cars only by paint. Protected bike lanes have the proven ability to dramatically increase cycling participation rates for these Interested But Concerned folks!

Why should Charlotte invest in Uptown protected bike lanes when we're facing increasing motor vehicle congestion? With an estimated 400,000 residents moving to the city over the next 25 years, our traffic congestion will only get worse if we continue to provide street space almost exclusively for cars. Our streets in the urban core would serve residents much better if some of our excess on-street parking was converted to lanes to move cyclists safely.

In a city that currently ranks last among the 50 U.S. cities for upward economic mobility, transportation must be considered as a social equity issue. Very low income workers (less than $10,000 household income per year) bike to work at twice the rate of the national average for all income levels. 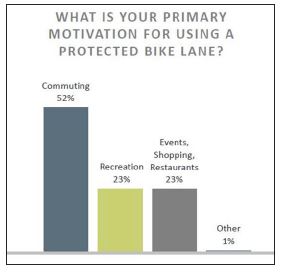 More than half of workshop participants would primarily use a protected bike lane for commuting to work!

Next steps and challenges

CDOT and Charlotte Center City Partners will host a workshop for Uptown property and business owners in December. A second public meeting will be held in January 2017, including a public comment period that will extend into February. We'll share those opportunities with you when we hear details.

The Uptown Connects Study is projected to be finished in February. CDOT plans to implement a demonstration protected bike lane in spring 2017, followed by a pilot project. We're very encouraged that the public enthusiasm for protected bike lanes is so high and that CDOT is creating a plan of action to move forward. But several key concerns remain:

Our #iBikeCLT petition called for City Council to approve construction of an Uptown protected bike lane connecting Little Sugar Creek and Irwin Creek Greenways in 2016. The study schedule we just saw on Monday calls for a "Demonstration Project" in Spring 2017, followed by a "Pilot Project" with a To Be Determined timeline.

At the meeting, Council member John Autry asked, "What will we learn from a pilot that hasn't been learned in other cities?" CDOT's Vivian Coleman cited the example of how Calgary has made dozens of modifications to its protected bike lanes in the past year and a half. CDOT director Danny Pleasant said "When we're trading vehicle lanes for bike lanes, we expect that people will have opinions about that...We want our first urban cycle track to be outrageously successful."

Once the alignments for an east-west and north-south protected bike lane are chosen, it will take some time to properly plan for:

As soon as technically possible, we want to see a committed date for installing the protected bike lanes!

Participants at the September workshop were asked what streets they'd like to see protected bike lanes built on. Here's what they said: 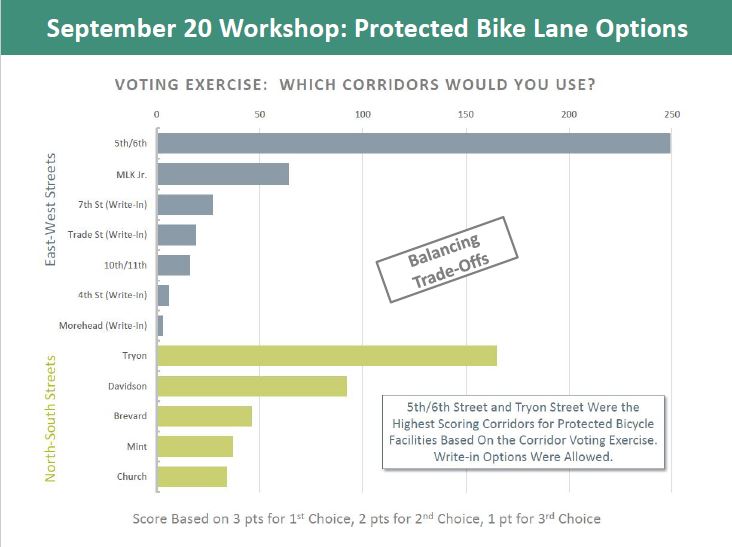 We agree with the workshop participants' preference for centrally located protected bike lanes. More people will be able to use the lanes if they cut through the heart of Uptown rather than running along side streets close to its perimeter. Easy connectivity to the greenways must also be a prime consideration.

It's important to collect input from businesses along the lanes and make reasonable accommodations to maintain access for deliveries. It's also important to know how the new lanes will affect overall traffic flow. But a long-term view is needed here. A committed investment to making Charlotte's future protected bike lane network means supporting the City's transportation and planning vision: Charlotte will be the premier city in the country for integrating land use and transportation choices. Ultimately, the decision about where, when, and how protected bike lanes will be built must be made in the best interest of Charlotte residents.

Let's knock this one out of the park, Charlotte!

Sustain Charlotte's bicycle advocacy work is supported by grants from the Knight Foundation and People For Bikes.