Why (and how) should Charlotte make space for buses? 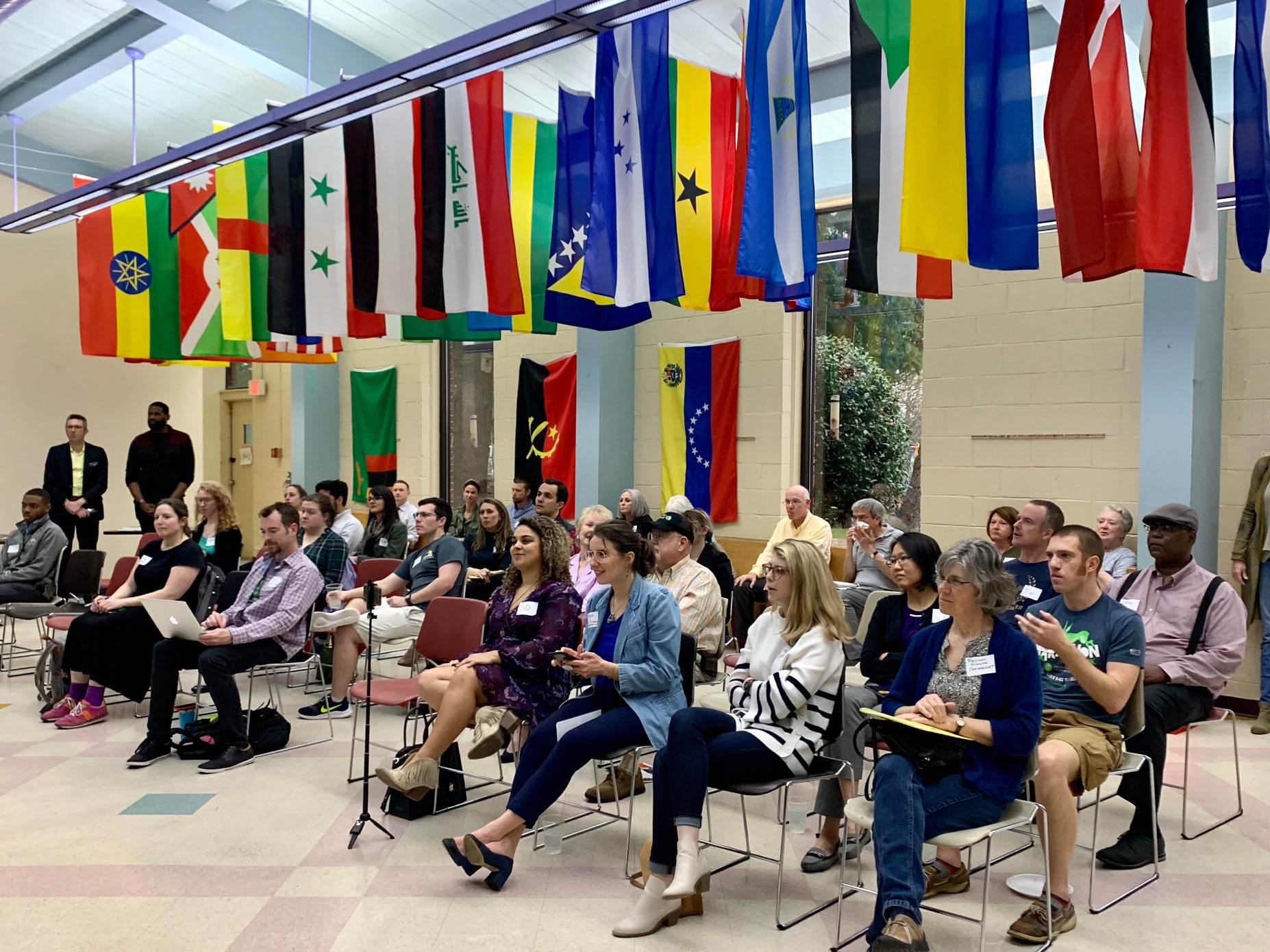 The best transit is fast, frequent, reliable and walkable. These factors are what riders most value-- and when transit works well for the people who use it, more people are more likely to use it frequently.

Cars take up an incredible amount of street space. As in most U.S. cities, Charlotte’s street design still revolves largely around cars and car usage. 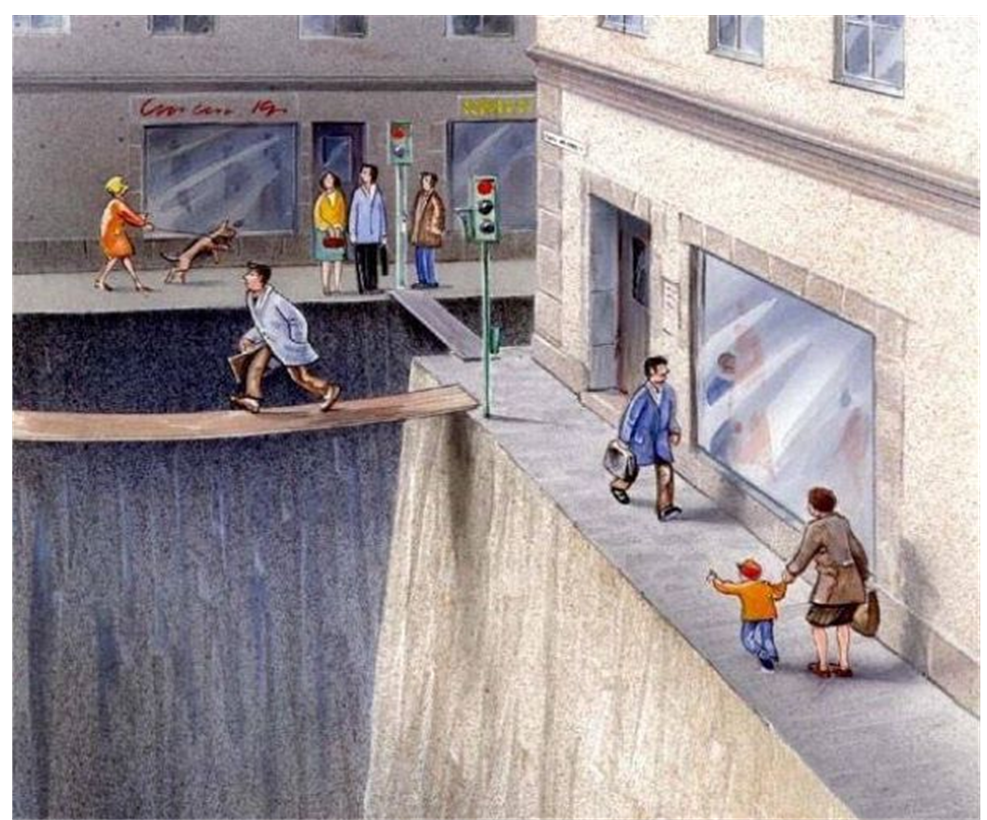 This image above by artist Karl Jilg illustrates the fact that most of the streetscape is taken up by space reserved for cars. Very little space is left for people to safely walk, ride a bicycle, or reach a bus stop.

Poverty and commute times are linked. Charlotte households spend an average of 29% of their income on housing and another 22% on transportation, leading to a cost-burdening 51% of income being spent on just these two basic necessities. As a result, commute time is the single strongest predictor of escaping poverty. When people don’t have access to transportation that is both affordable and fast, it’s difficult for them to access jobs while also still having time to care for their families and themselves.

Renowned transit planner Jarrett Walker coined the phrase, "transportation is freedom." Quite literally, the size of the world that a person can access is limited by the transportation choices available to them. If a person has a car, their world is quite large. If they rely on public transit, the boundaries of their world are defined by how far and how fast they can travel by bus, light rail, or Special Transportation Service.

How many entry-level jobs would be accessible to you within a 30-minute transit ride from where you live? Drop an imaginary pin where you live on this map. The color below that pins shows whether you have access to lots of opportunities (dark green), if there are no jobs within 30 minutes (red), or some number in between (yellow and orange).

This mapping tool from the Center for Neighborhood Technology's new Urban Opportunity Agenda is an eye-opening illustration of the disparities in access to transit that connects Charlotteans to jobs -- or leaves them stranded far from jobs. 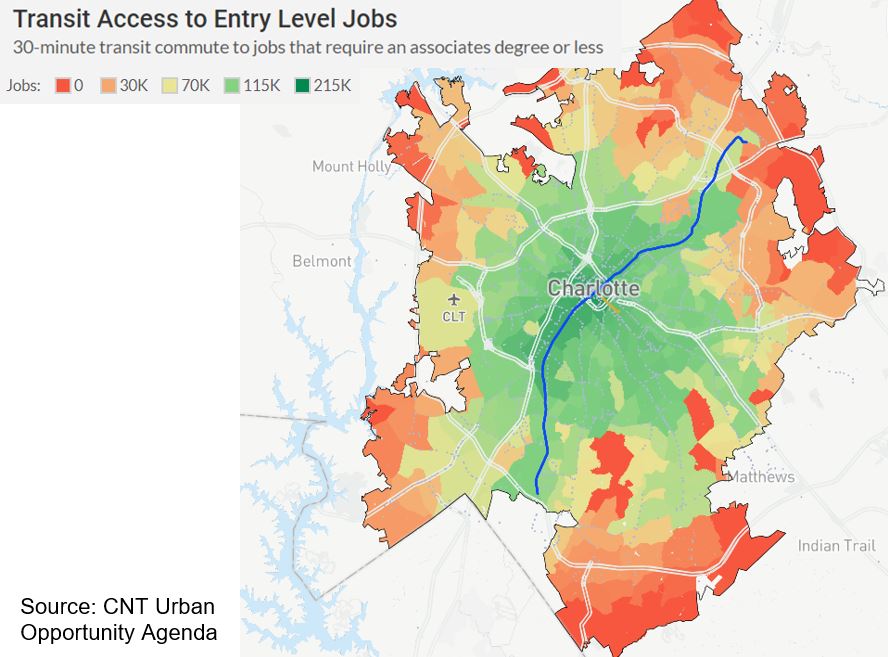 The way that our streets and neighborhoods are designed can limit a transit rider's freedom. The abundance of cul-de-sacs in certain neighborhoods actually limits traveling freedom for suburbanites, just as the inability to travel limits freedom for households with limited income.

The map below shows an example from Orlando, FL, of a circuitous route in which two neighbors at Point A and Point B had to travel because of poor street design. These neighbors literally share a backyard fence, but cannot travel to one another’s’ homes without a 7-mile drive!  It would be quite difficult to serve a neighborhood like this with fast, high-frequency public transit due to extensive sprawl and lack of street connectivity. While this example is pretty extreme, much of Charlotte’s suburban area is similar and therefore not easily served by transit. 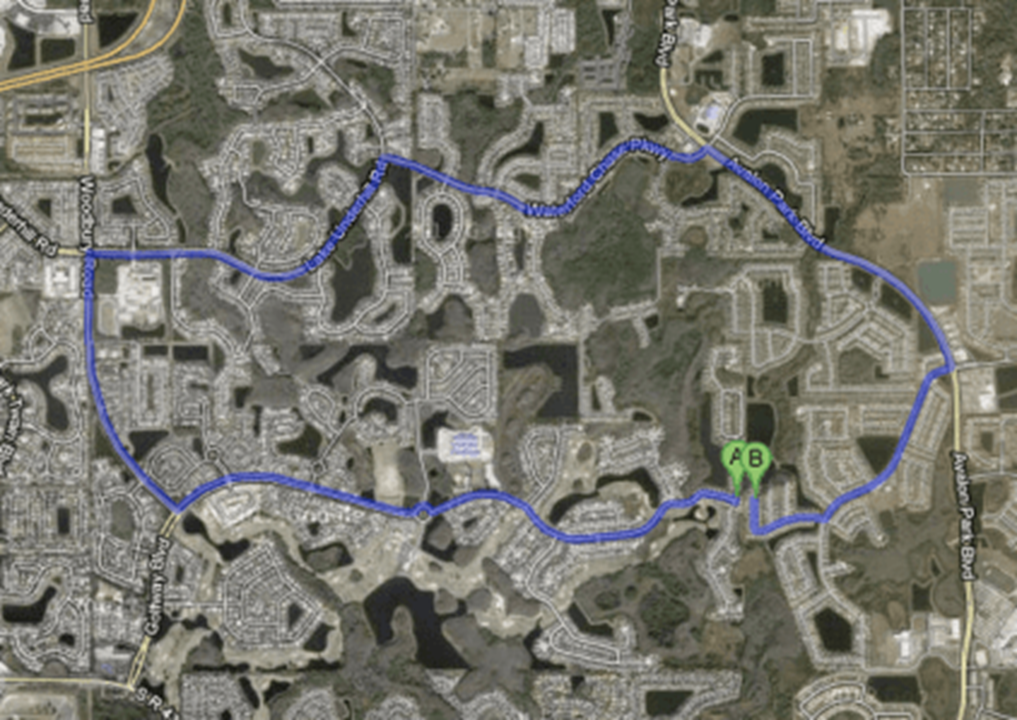 Conversely, bus service is more feasible in areas with major streets and a well-connected street network that allows people within walking proximity to reach stops on foot. As illustrated in the figure below, a bus line can serve more riders per hour in such areas. 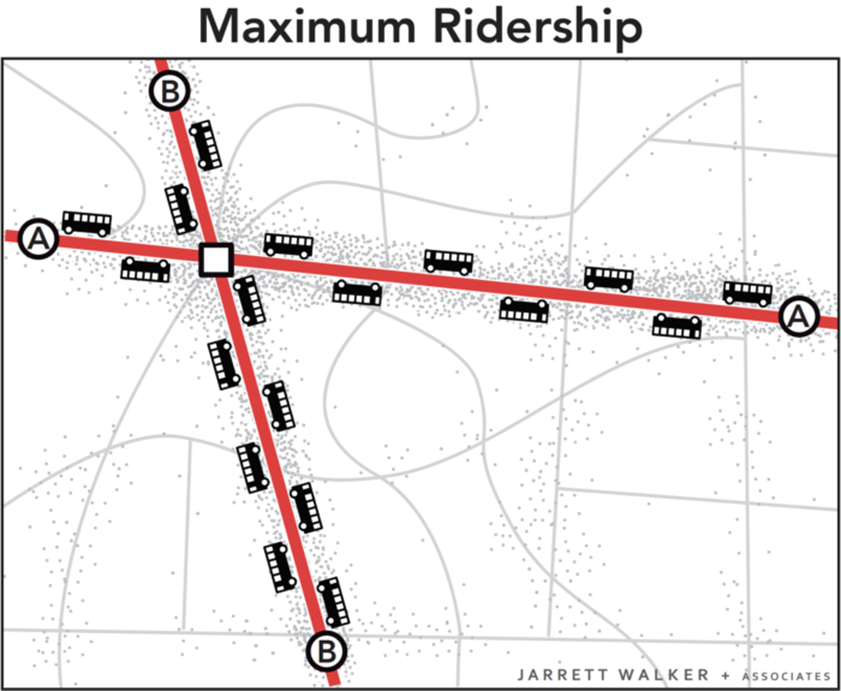 Another consequence of sprawl is traffic congestion and the wasted time it causes drivers. In 2019, Charlotte area drivers spent 49 hours of their time in traffic congestion. Buses can help combat congestion because far more people can travel in a lane of traffic per hour than could travel by driving cars, as shown below. 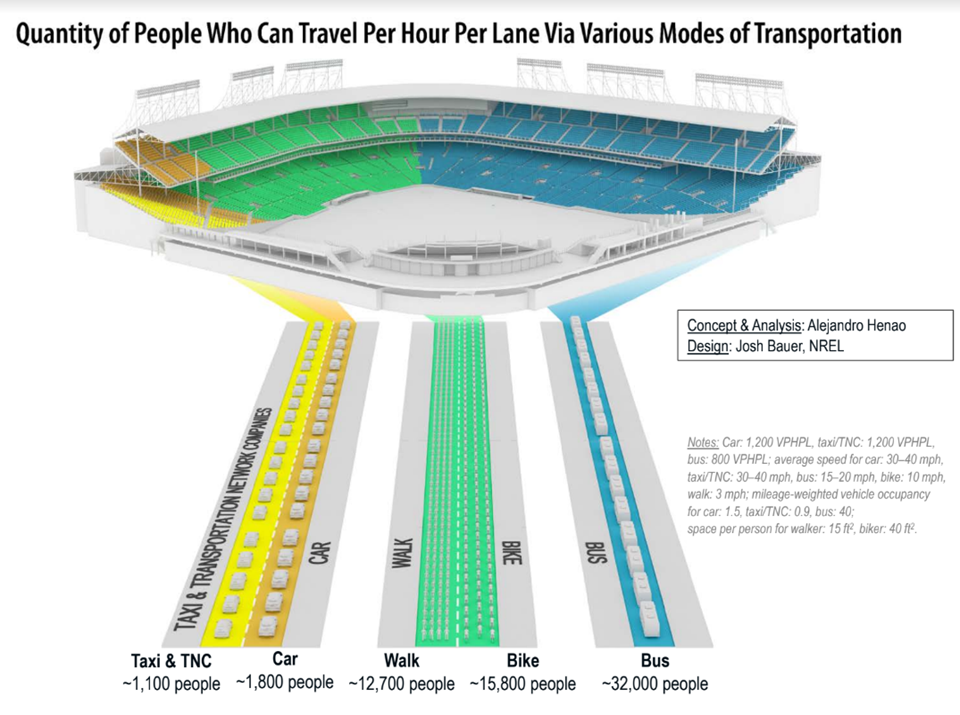 We hope that event attendees learned that transportation is freedom and that the more a person can travel efficiently in their daily life, the bigger their world and opportunities will be. Great transit allows people the ability to access jobs, the ability to connect with one another, and most importantly the ability to simply get from point A to point B.

Moving in the right direction

CATS Senior Planner Jason Lawrence shared how CATS has been improving its bus system since 2000.  Launched in 2016, Envision My Ride works to add more crosstown service, more connection between routes and the light rail, and more frequent and direct service. The first changes came in October 2018 as CATS completely redesigned the structure of its bus routes. While that effort has improved efficiency by reducing the need for riders to come into Uptown to transfer, there the bus service still needs to be more frequent. That will require at least an additional $36 million per year to pay bus drivers and will require purchasing 80 to 100 more buses.

CATS’ Bus Corridor Study will determine how corridor specific "bus treatments" can be implemented to provide quicker commutes for riders.

Examples of bus treatments include:

The Charlotte DOT and CATS have partnered to install a pilot lane on 4th Street between McDowell St and the Charlotte Transportation Center (CTC). This lane can only be used by buses and bicycles. It is helping buses to stay out of traffic congestion as they near the CTC, while also providing space for safer bicycling.

How can I help?

YOU can be an advocate for better public transit in these times of economic and social hardship! While we’d normally suggest that you take a ride on a bus or light rail to see if it might be a good travel option for you, we urge you to hold off on doing that until the stay at home order is lifted unless you’re an essential worker using transit to get to your job.

Last week Sustain Charlotte joined dozens of transit advocacy organizations across the country in asking Congress to allocate $25 Billion in emergency funding to ensure that our transit systems remain strong through the coronavirus crisis. Thanks to relentless advocacy, Congress approved the funding. We’re continuing to advocate for the needs of transit riders in Charlotte and making sure that high-quality transit will be available to connect people to opportunities so that our economy can recover quickly.

We’ll keep you updated on upcoming opportunities to add your voice to the conversation.