Madrid is prioritizing people over cars. Could it work in Charlotte?

But when you're really passionate about improving the city you call home, you can't help but notice transportation innovations when you travel. Here's what I found during my vacation in Madrid, Spain. 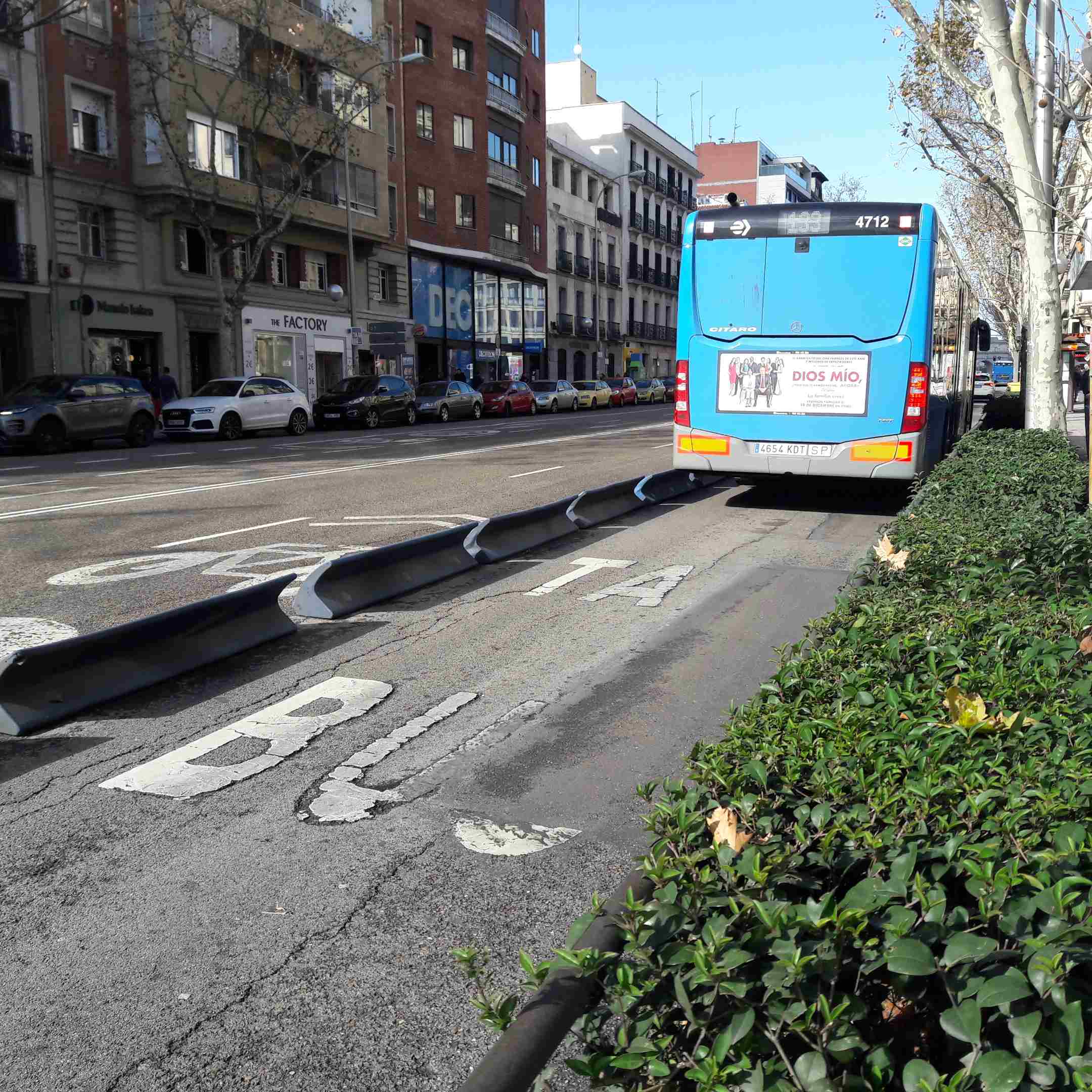 Madrid has a network of lanes just for buses and taxis.

Not only does Madrid have one of the most extensive metro systems in the world (over 300 stations!), but the city also prioritizes buses on its streets. As traffic slows down during rush hour, buses zip right along in the right lanes that are designated just for them and taxis.

Madrid has installed vertical barriers along the sides of its bus lanes. This prevents car drivers from driving or parking in the lanes. Yet the barriers are flexible enough to allow emergency vehicles to drive into them if needed. While these barriers aren't yet in use in the U.S., paint is recommended to remind vehicle drivers that the lane is not for general use.

We'd love to see red paint on the pavement to delineate the new bus/bike lane on 4th St. Red paint has been shown "deter both unauthorized driving and parking in the bus lane." 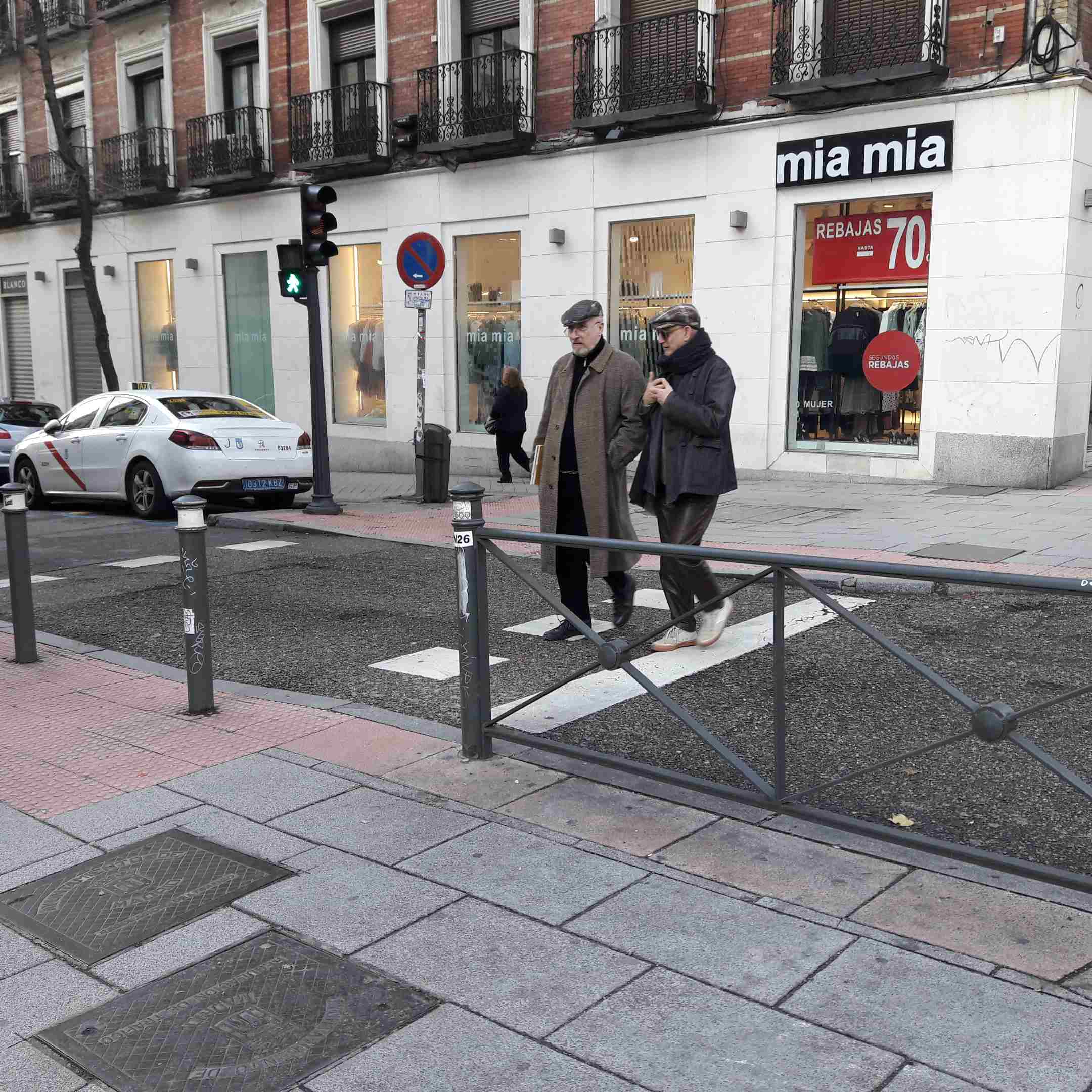 Many one-lane one-way streets in Madrid have signalized crosswalks.

The street crossing shown in the photo above is just one of many that I passed as I was strolling around an intercity bus terminal. What really struck me is that there weren't only signalized pedestrian crossings at major intersections and mid-block crossings of major thoroughfares. They were all over.

In parts of Madrid where a lot of people were walking, I also saw these crossings on most of the side streets within a few blocks of major streets. Even at the unsignalized crosswalks, drivers really did consistently yield for people walking.

I was so enthralled that I bought some churros and sat at a streetside cafe for a good half hour. Just watching drivers yield to people at crosswalks. It was beautiful. It's something I want to see and experience in Charlotte.

How did Madrid make this happen?

The ingredients that are making Madrid a friendlier place to get around without a car are:

2. Enforcement: Drivers clearly take crosswalks very seriously in Madrid. Serious enforcement has led to a culture of accountability for all road users. Cell phone use without a hands-free device is banned while driving in Spain, even when stopped at a light. Fines and penalties for speeding, failing to yield, and distracted driving are stiff.

3. Political will: Five years ago, Madrid's city hall began implementing a new Mobility Plan with the slogan "Madrid is for people, not for vehicles."  In 2018 Madrid's city council passed a law limiting the speed limit to 30 kilometers per hour (about 18.6 mph) on all one-way streets and single-lane two-way streets. Many other policies and investments since 2014 have begun to prioritize people over cars!

4. Aligning transportation and climate change goals: Madrid's Mobility Plan also includes goals for reducing greenhouse gas emissions and increasing the percentage of renewable energy sources used by the transportation sector. Transportation investments are made based on the mobility needs of current and future residents, but also on climate goals that Madrid and the European Union have committed to. Charlotte should also align transportation decisions with its Strategic Energy Action Plan (SEAP) to achieve its goals of a zero-carbon fleet of city vehicles by 2030, and becoming a community-wide low carbon city by 2050. This means investing in renewable energy sources for city vehicles and making Charlotte easier to get around without a car so that people who live and work here can reduce their carbon footprint when traveling.

How could we modify this recipe for Charlotte?

1. Seriously invest in infrastructure to make walking, bicycling, and riding public transit safe and dignified. Given Charlotte's long history as an auto-oriented city, there's a huge backlog of need for more sidewalks, protected bike lanes, safe crossings, and other infrastructure. Some of this is inexpensive, some is expensive. It all needs to be done.

2. Step up enforcement for drivers who endanger people by speeding, running red lights, failing to yield, and driving under the influence or distracted by cell phones. While we agree that all people using the road need to obey laws, it's those behind the wheel of a 2-ton car who are most likely to cause harm if the rules of the road aren't followed.

3. Be clear on our priority for Charlotte's streets. Here's where we get it not quite right in Charlotte. The word 'priorities' wasn't in common use until the 1940s. That's because a 'priority' is the one thing that's more important than any other thing. Its plural form is an oxymoron. While we can and should make space on our streets for both cars and active transportation, it's simply not logical to prioritize all modes of transportation. Charlotte's growing population, poor economic mobility, and record-high pedestrian fatalities for the past 3 years demand that we put the needs of people first.

4. Don't be afraid to say "As a city, let's prioritize people over cars." This is the most important ingredient in the recipe. If we get this part right -- and stick to it over time -- then the right investments and policy will follow. If you agree with this principle, please help support our elected officials and government staff to do the same. They need to know we're behind them!