What worked and what didn't: Learning from other cities

When you're about to spend a lot of money on a big investment that's intended to improve your quality of life, you probably don't go into the situation without doing some research first. Whether it's buying a home or helping your kid choose a post-secondary education option, you've likely asked questions about the value of your investment. Maybe you talked with friends and family, read reviews, and looked at projections of how that investment would pay off over time.

It's not so different as Charlotte begins to consider the best way to create a plan for advancing mobility in our city. And just as importantly, how to pay for it over time. What will it take to champion a winning investment that voters are excited to support?

As the Charlotte Moves Task Force moves closer to their goal of recommending a comprehensive package of mobility projects and recommending a funding source, they're beginning to look to peer cities that are also facing incredible population growth and mobility challenges.

At their July 23 meeting, the Task Force heard from a panel of transportation staff in 3 peer communities: Broward County (FL), Austin (TX), and Nashville (TN). 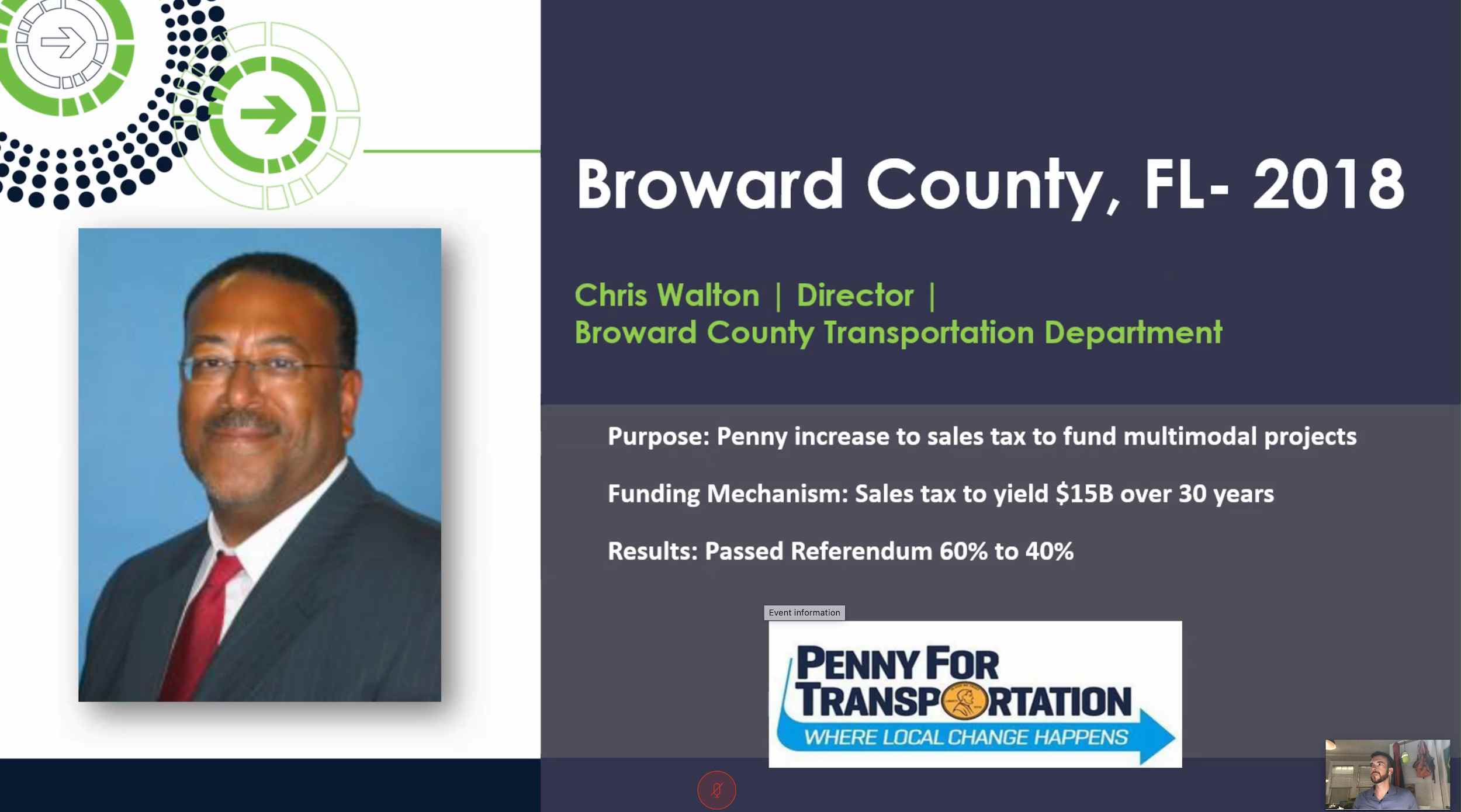 After failed transportation funding campaigns in 2006 and 2016, Broward County successfully passed a referendum in 2018 with a 60% to 40% vote. What were their keys to success the third time? 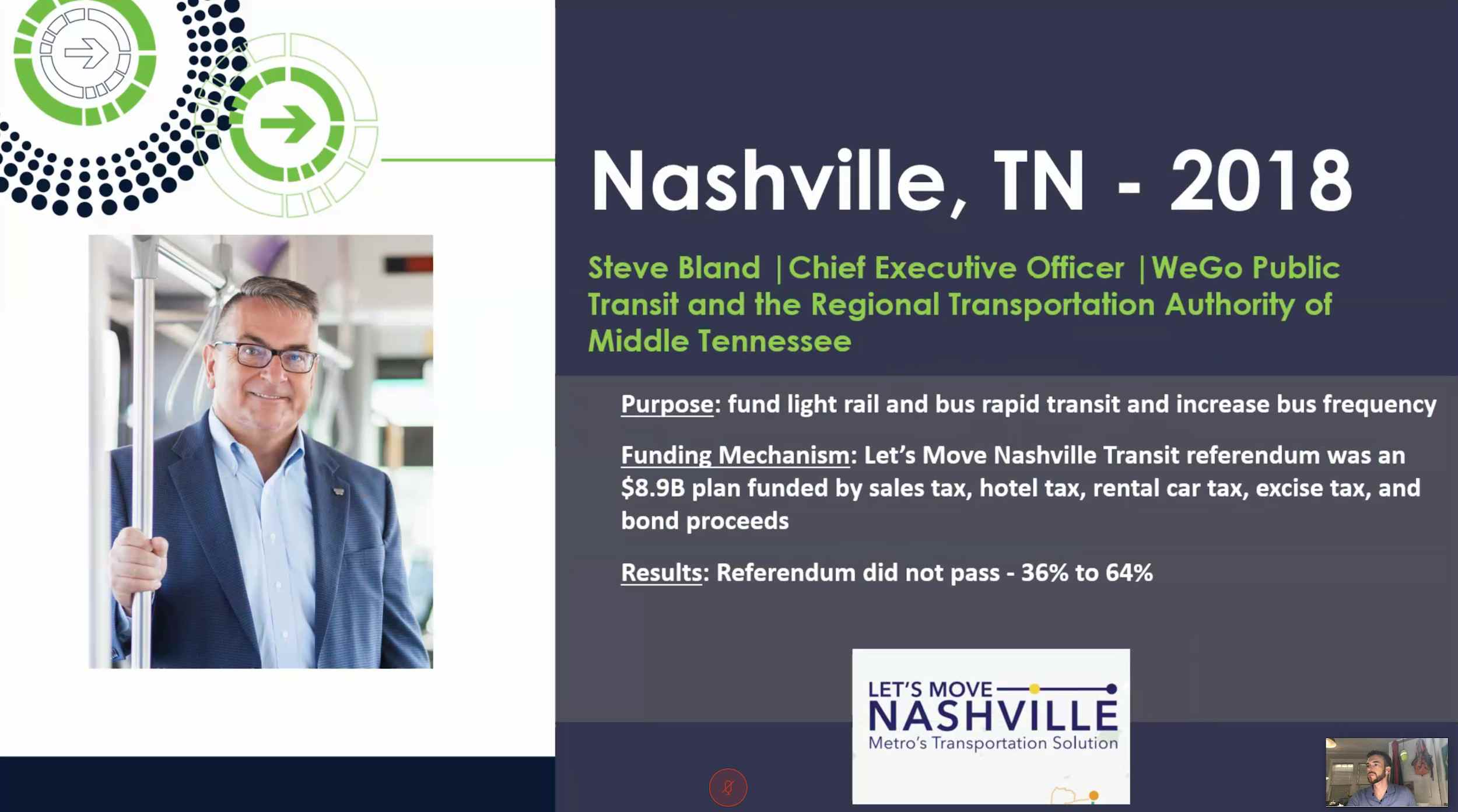 The 2018 Let's Move Nashville Transit Referendum would have raised approximately $8.9 Billion over 15 years through sales and other taxes. Chief Executive Officer of WeGo Public Transit and the Regional Transportation Authority of Middle Tennessee Steve Bland shared the initial plan and ultimate weaknesses of Nashville's strategy after the referendum failed by an overwhelming 36% to 64% vote. 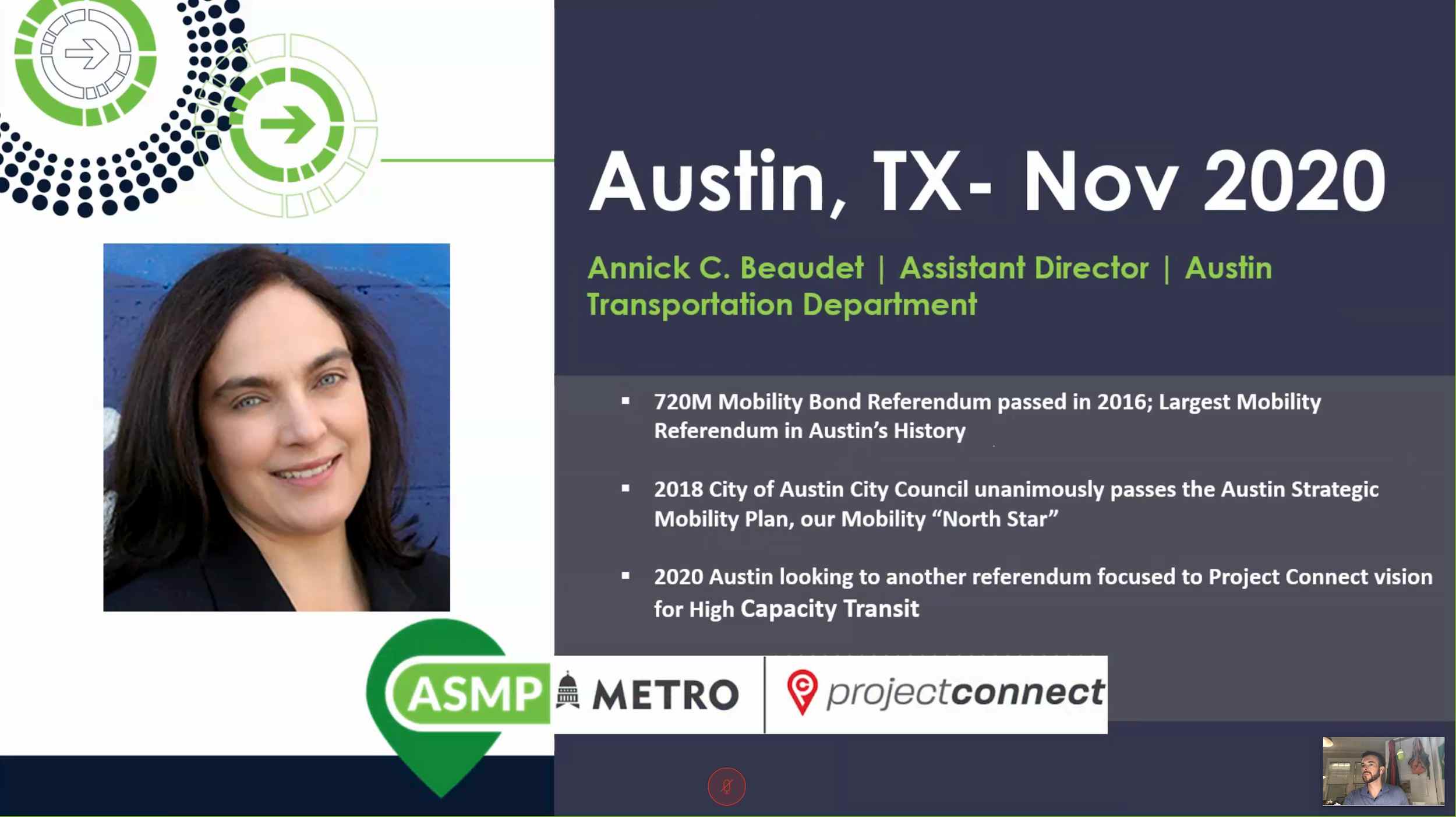 Austin: How will it unfold this fall?

Austin's situation is perhaps closest to Charlotte's. They completed a Strategic Mobility Plan in 2018 that Charlotte is now looking to as our "North Star", including the 50/50 mode share goal (50% of trips taken by driving alone and 50% by sustainable modes like walking, biking, public transit, and carpooling). Austinites will go to the polls this fall to vote on a referendum for high capacity transit. Austin Transportation Department Assistant Director Annick Beaudet discussed how the city created a transportation vision and investment plan that they believe will be a "Yes" for most voters this year.

What do Charlotte Moves Task Force members have to say so far about their experience and transportation priorities? Here are some interesting poll results: 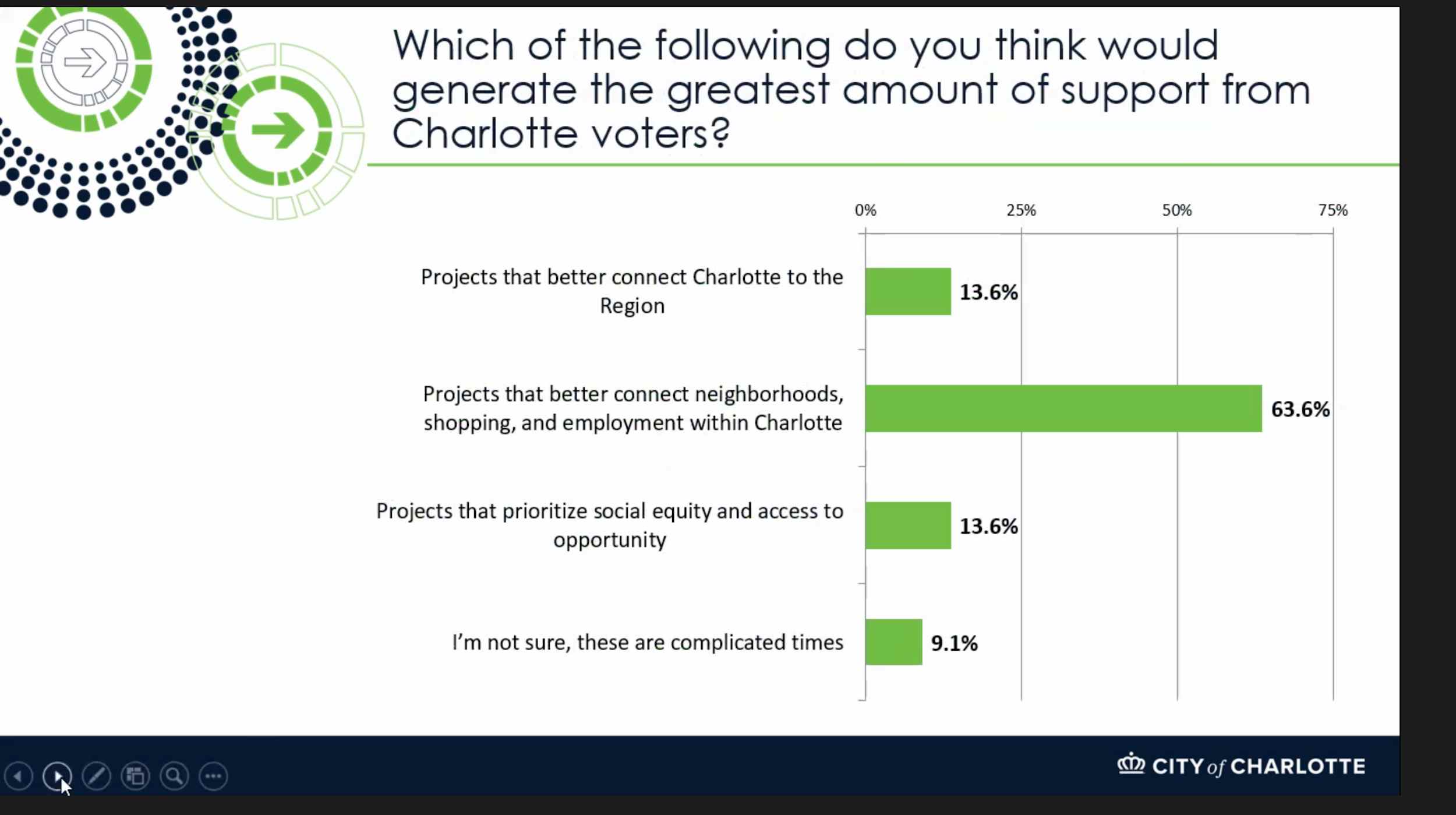 A poll of Charlotte Moves Task Force members prior to the meeting showed that an overwhelming majority -- 63.6% -- said that the projects likely to generate the most support from Charlotte voters are those "that better connect neighborhoods, shopping, and employment within Charlotte." Tied for second place at 13.6% each were "Projects that better connect Charlotte to the Region" and "Projects that prioritize social equity and access to opportunity." As was noted by the presenter, social equity and access to opportunity are likely to be inherent to projects that improve connectivity. In other words, these categories aren't mutually exclusive. 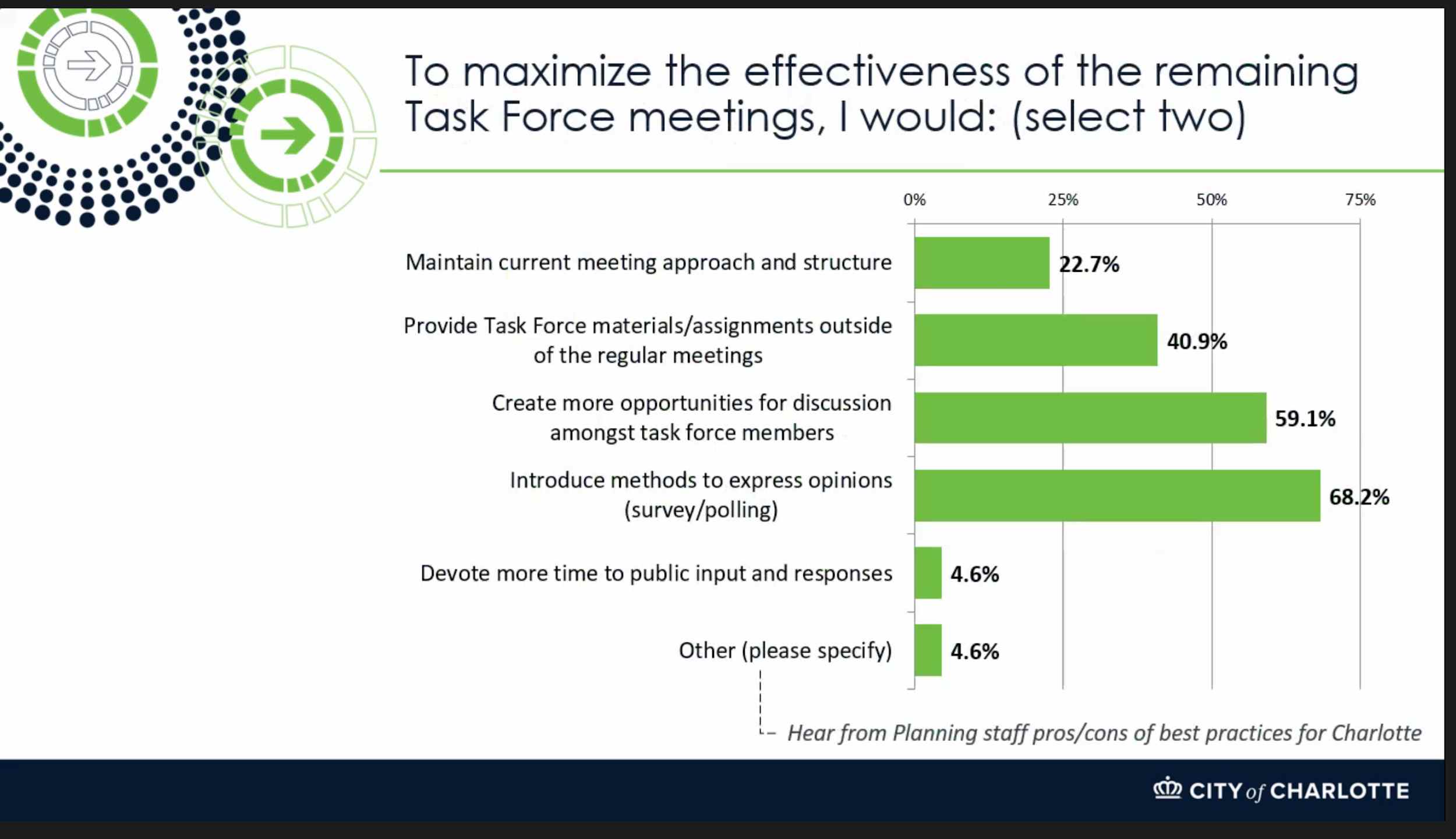 Task Force members were asked to choose two of the above options for maximizing the effectiveness of the remaining meetings. The two most popular answers were "Introduce methods to express opinions (survey/polling)" at 68.2%, and "Create more opportunities for discussion amongst Task Force members" at 59.1%.

You may share our frustrations over the challenges of public engagement as all meetings are now being held virtually. We know that's necessary to keep us all healthy, and we're glad City staff quickly pivoted to provide public access to the meetings in real-time via Facebook Live and YouTube. But it does make it difficult for Task Force members to have discussions amongst themselves, and even harder for the public to engage. We hope to see more opportunities for Task Force members to communicate and express their opinions. Even better, could the polling during the meetings include opportunities for the public to participate?

Charlotte Moves Task Force meetings are held monthly. The next meeting is scheduled for 6:00pm on Thursday, August 20. The public is welcome to watch the meetings live on the City's YouTube channel and encouraged to submit questions by email in advance of, or during, the meetings. Learn more.