"Build a system that works, and the riders will come." Keynote speaker John Martin from the Southeastern Institute of Research inspired attendees at the Regional Transit Summit last Thursday with a message of hope for the future of transit as our area struggles with accommodating the transportation needs of a growing population. He explained the transportation and lifestyle preferences of the various generations currently living in the United States, and emphasized the need to shift from talking about transit riders as a captive audience. "It's not about Transit Dependent. It's about Transit Empowered." In other words, when transit performs well compared to the choice of driving alone or using a ride-sharing service, people of all ages will choose to use it. Nowhere has this been more clear than in Seattle, where that city's investment in fast, frequent transit has led to a huge increase in the number of daily transit commuters. 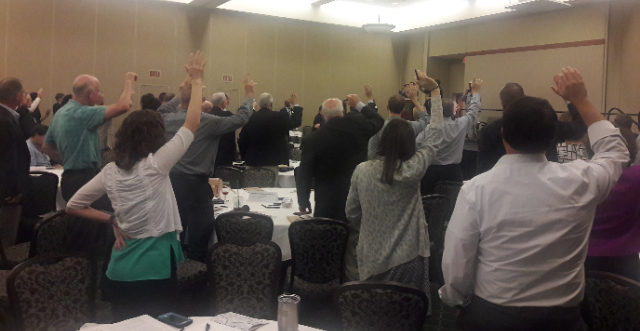 Building great transit from the inside out

About 77,000 rides are taken daily on the Charlotte Area Transit System (CATS), which equates to 39,000 daily riders in our area! 55% of those rides are taken by commuters using public transit to travel to and from work. That's significant because transportation costs in Mecklenburg County consume 23% of household income. At the Summit, presenters shared stories of how transit allows residents to access jobs, education, and opportunity that would otherwise be unreachable.

CATS is in the midst of a study of future rail lines to the north, west, and how those lines will connect to each other and existing services in the center city area. That report will be complete in late 2018. In order for the region to have great transit, it's important for the existing transit network to perform well. Currently, Charlotte still has a "spoke and hub" transit network that requires Uptown transfers for many trips, resulting in a 90 minute average one-way trip time for riders who transfer. Sustain Charlotte's recent op-ed in the Charlotte Observer highlights the need for an improved bus network at the core of an improved transit network.

But what does the public, including those who don't ride transit, want to know when they're asked to support transit expansion? Marcia Garcia Berry from CRL Associates shared several messages that resonated with voters in the metro Denver area when they were asked for funding to expand its transit system. The most relevant message for the Charlotte region is that change and growth are coming, and the time to act is now.

County and planning managers from York, Cabarrus, and Gaston Counties discussed the need for more transit in and beyond their counties, all of which are experiencing tremendous population growth and a resulting strain on public services. The nine-county region including Charlotte currently is home to about two million residents, but that number is expected to swell to 3.5 million by 20 years from now. Those figures don't even include our neighboring counties in South Carolina. Over 50% of our region's population works in one county and lives in another. Although some roadway improvements will support better connectivity, the greatest opportunity to sustainably improve mobility of residents is with transit. That should begin with improving existing service, while concurrently planning for regional transit to support economic competitiveness, equity, and environmental health.