Sidewalks that end in muddy lawns.

Four lanes of 45 mph traffic with no signalized intersections (traffic lights) in sight.

A flattened decaying possum in the middle of the sidewalk.

No, this isn't a twisted game of Jeopardy. These are actual challenges that were identified during our two Walk2Transit bus stop walkability tours last week! 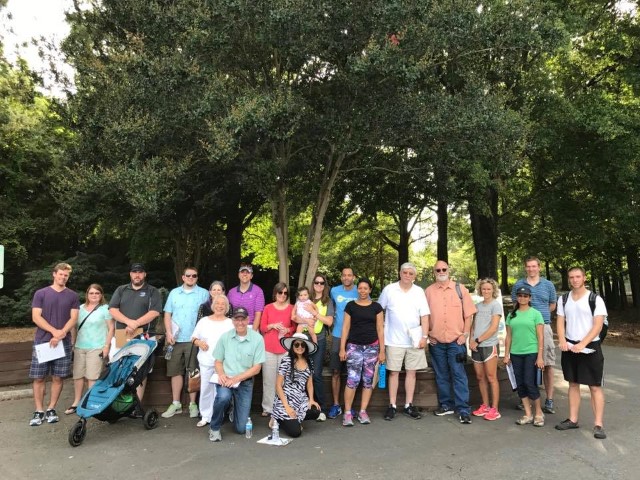 So many committed volunteers for the Monroe Road tour!

Last week was a scorcher, but that didn't stop dozens of volunteers from AARP Charlotte, Monroe Road Advocates, and area neighborhoods from helping us document these and other problems during two Walk2Transit bus stop walkability tours.

On Rozzelles Ferry Road in West Charlotte and Monroe Road in Southeast Charlotte, we helped connect residents to each other as we partnered on an advocacy project to improve transportation choices! We were honored to be joined by John Autry (NC House Representative, District 100), Dimple Ajmera (Charlotte City Council, District 5 and candidate for At Large), and Ryan McGill (candidate for Charlotte City Council, At Large).

With four lanes of traffic and a center turn lane but no raised median, Monroe Road is a daunting obstacle to cross at rush hour. Though the posted speed limit is 45 mph, many of the vehicles were moving faster. 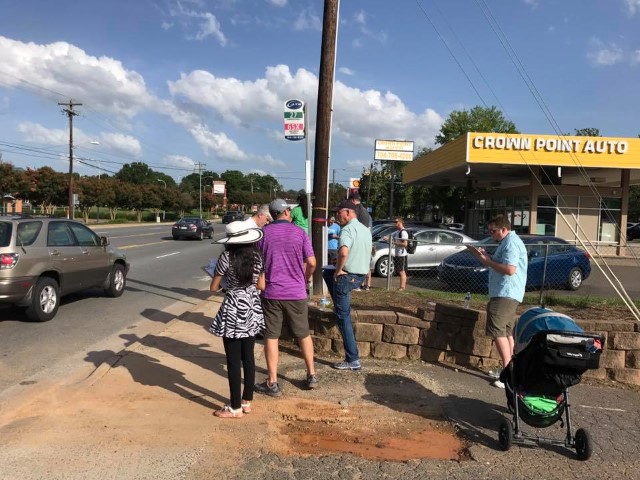 This stop has a narrow sidewalk and no safe way across a very busy thoroughfare.

As we walked further south, the volunteers noticed a lack of crosswalks and traffic signals. Yet there are homes, medical offices, restaurants, and many other destinations on both sides of the street. Most bus riders will have to walk across the street on either their inbound or outbound journey. For more background on the area's safety challenges, read resident Brent Gilroy's article.

One volunteer who lives nearby recounted that he's driven through this stretch of Monroe Road hundreds of times, but had never experienced how daunting it is to walk along. "It was much more terrifying than when driving because you there is no separation between sidewalks and road, and people are zipping by at 60 mph. It's a tough one."

Despite the overall challenging conditions for pedestrians, our volunteers really noticed a positive difference when we reached a bus stop adjacent to a fairly new apartment property. Thanks to the stop's amenities and wide separation from lanes of traffic, a few people even felt relaxed enough to sit down for a few minutes.

Would you rather wait at this bus stop, or the one above? 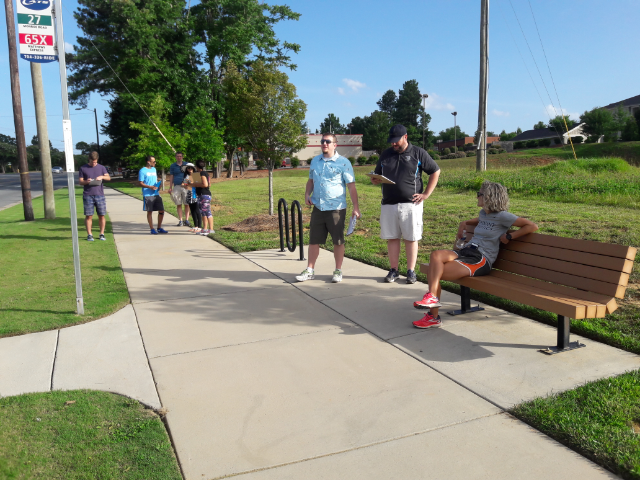 We loved this Monroe Road bus stop for its bench, bike rack, and wide sidewalk with a wide planting strip.

Across town in West Charlotte, we partnered with AARP Charlotte volunteers and some interested Charlotteans to complete a walking audit of Rozzelles Ferry Road. 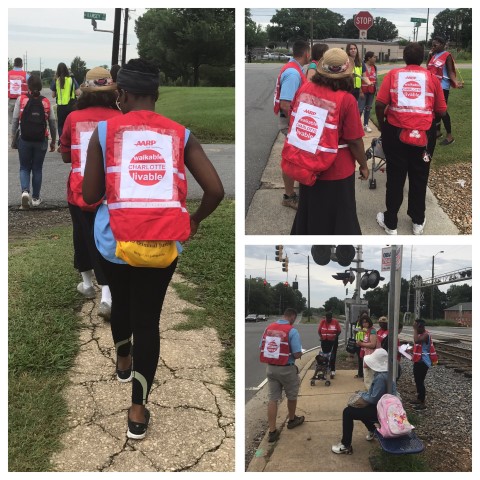 Although this was the shortest of the audit tours we've done so far, in many ways it was also the most disheartening. Traffic volumes and speeds weren't as high as on many of the major thoroughfares, but the sidewalk situation was pretty bleak. Pedestrians had to walk right next to traffic lanes on narrow sidewalks. We saw a flattened possum in the middle of the sidewalk (view here if you dare) and talked about how residents can request dead animal pickup from Solid Waste Services. At one point, there was just a very thin and cracked segment of sidewalk that looked like it may have been left from a private development.

Then the sidewalk literally ended. A grandmother who had brought a toddler couldn't go any further because she would have had to walk with the stroller through muddy puddles in the grass. 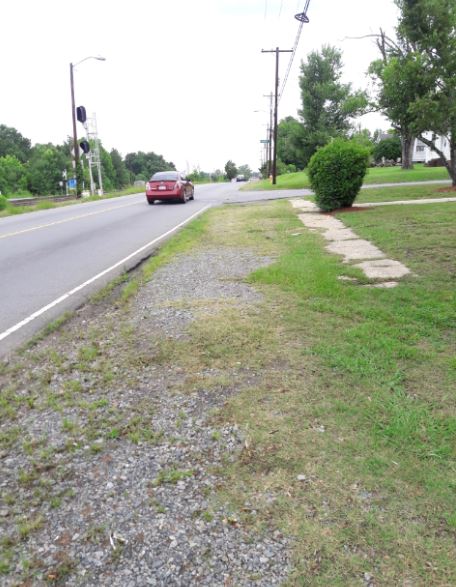 There weren't bus stops within this sidewalk-free area, but there were homes that riders might need to reach. 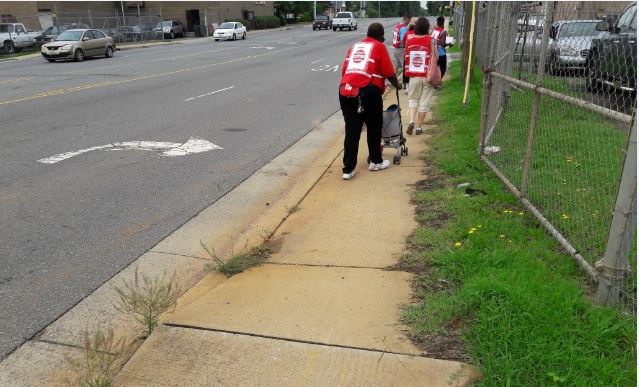 Overgrown grass made this already narrow sidewalk even more challenging.

Sitting by the tracks

On the other side of the street, the narrow sidewalk adjacent to freight rail tracks was...well, terrifying. We saw a young man and an elderly woman waiting just yards from the tracks. Unfortunately, this property is in the railroad's right-of-way and they place strict limitations on what type of transit infrastructure can be added. It raises an important issue: How does a transit agency provide service to areas where they or the local DOT doesn't have control over land use conditions? 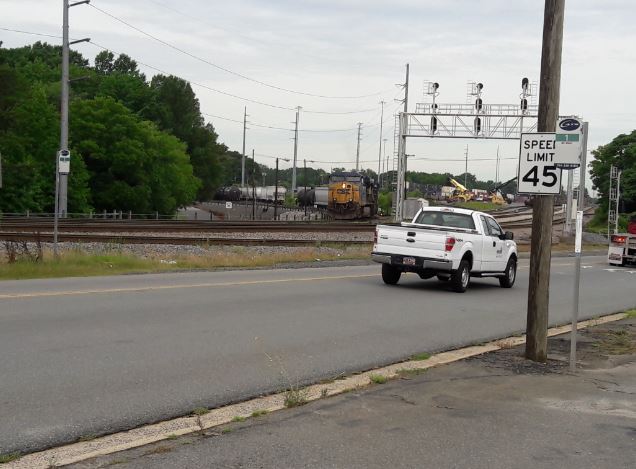 The power of volunteers

Thanks to all who braved the heat to help us collect observations about conditions facing pedestrians who walk to their bus stops. From bus riders to non-riders, neighborhood residents to visitors, infants to elders, we're grateful for the unique perspective that each of you has given to this project.