It'll soon be safer to walk on West Boulevard

Thanks to a $1.5 Million investment from CDOT's Corridor Program and years of resident advocacy, BIG changes are coming to one of Charlotte's most vibrant communities!

Four pedestrian hybrid beacons and a full intersection traffic signal are anticipated to be constructed by the end of the year along West Boulevard between the Wilmore neighborhood in the east and Billy Graham Parkway in the west. These improvements will provide more safe opportunities for people who walk and ride bicycles to cross this busy major street. It will also improve safety for riders of the #10 bus, one of the most popular routes in the CATS bus network.

Our hope is that the new pedestrian crossing beacons and traffic signals will help to prioritize walking and biking, so that West Boulevard can continue its transformation into a genuine asset to the community rather than being a barrier that's difficult to cross without a car.

Here's a map of where the new signals will be installed. (not shown on map: Merriman/Wilmore Pedestrian Hybrid Beacon): 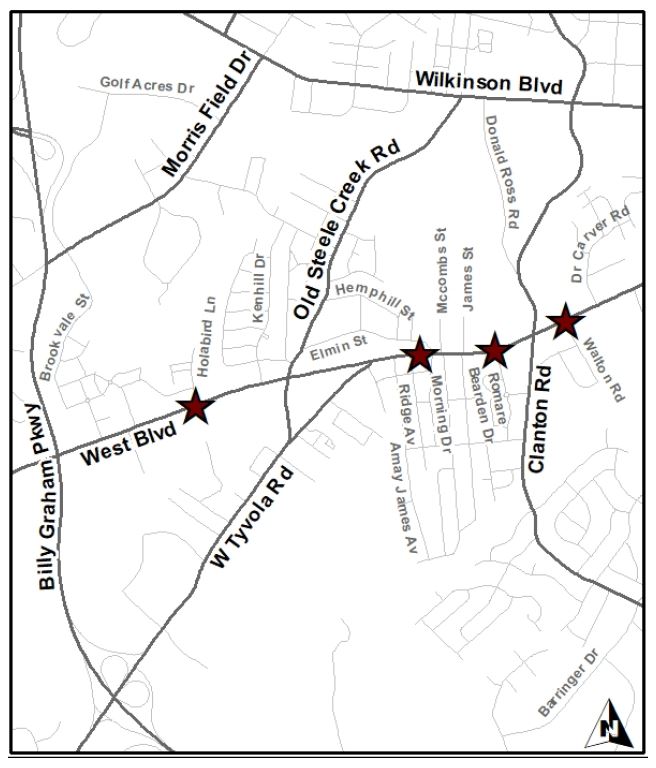 CDOT's stated goal is: "The project seeks to create greater pedestrian and bicycle connectivity at multiple locations throughout the West Boulevard corridor, between Camden Road and Billy Graham Parkway."

These projects are the fulfillment of recommendations made by CDOT in the West Boulevard Corrridor Study Findings Report after transportation planning and engineering staff had studied the corridor in 2017 and met with residents.

We've been partnering with the West Boulevard Neighborhood Coalition (WBNC) to advocate for a safer West Boulevard corridor and neighborhood streets since 2016 when we united to launch the Equitable Transportation Team led by community organizer and resident Charlene Mack.

Together with the WBNC, we organized and led walkability audits with the neighborhood youth, supported community engagement, and coordinated resident comments during a Charlotte City Council meeting asking for policies and investments to protect people walking and bicycling.

We know that more work will be needed to make West Boulevard a street that meets the needs of everyone who lives and works in the community. We're grateful for our partnership with the WBNC and look forward to continuing the work with them!