How will you share your input on land use planning in Charlotte?

This was one of our favorite blog posts to write, because there's just so much exciting news on transportation and land use to share with you! Plus, there are lots of public input opportunities to add your voice!

The City is making progress on its Streets Map, public input for the Charlotte Future 2040 Comprehensive Plan, and the Unified Development Ordinance. On Monday July 21, Charlotte City Council's Transportation and Planning (TAP) Committee heard updates from staff on each of these topics.

You can weigh in on the Streets Map!

The main goal of the Streets Map is to "Create streets that support transit-oriented (TOD) neighborhoods". That means the areas adjacent to the LYNX Blue Line light rail stations. Check out the picture below for an example of what a great street could look like. See how there are safe and inviting places to walk, cross the street, ride a bicycle, and ride public transit? 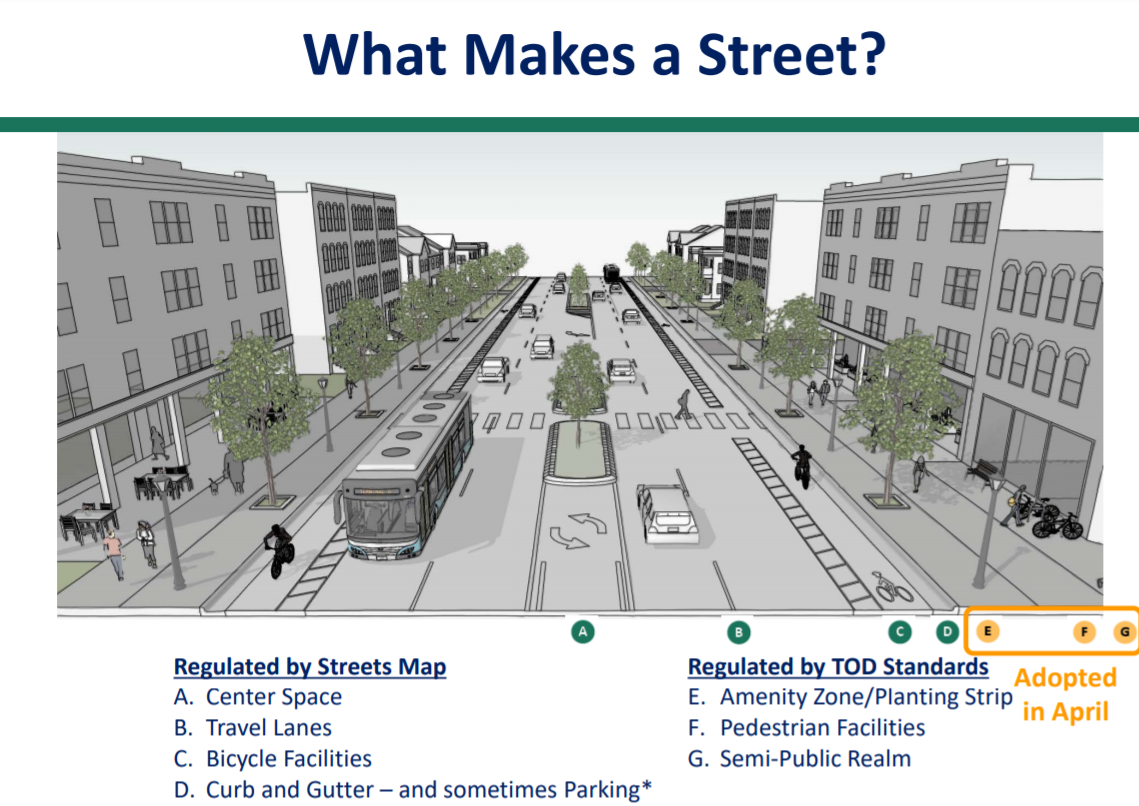 At this point you may be asking yourself, "Hey, didn't the City just adopt standards to improve streets in transit-oriented neighborhoods?" Yes, but it's a two-step process. In the lower right corner of the image above, note that the three elements of a great street that are regulated by TOD Standards were adopted by Council in April. These include amenity zones and planting strips, pedestrian facilities, and the semi-public realm. These three elements are regulated by the planning policy.

From the edge of one curb to the edge of the opposite curb, the street elements are regulated by transportation policy. We're talking about the space in the center of the street, travel lanes, bike facilities, curb & gutter, and parking. This policy has yet to be adopted, and it's why we need a Streets Map -- to provide "clear, consistent, predictable expectations for arterial streets."

Hundreds of people have shared their input on the Streets Map as part of the City's engagement for complete streets policies and plans. 85% of residents who were surveyed believe that streets should be designed to accommodate all users, including motorists, pedestrians, bicyclists and transit users. (Yeah, we don't know what the other 15% are up to either!)

What's next for the Streets Map?

1. Add your input! View the map now and share your thoughts at: Bit.ly/CLTStreetsMap.

2. The TAP Committee will make a recommendation to the full Council in September, followed by a public comment period in October. We'll keep you updated on how you can speak or contact your Council members in advance of that meeting.

The City's Planning staff updated the committee on the overall UDO process and shared 3 "2019 Quick Wins for the UDO".

Charlotte's regulations for signage on private property have gone largely unchanged since they were adopted in 1992. Now that the UDO is being developed, this is a great time to incorporate a new sign approach used in the TOD and move it forward in the larger zoning ordinance process.

The new regulations will provide consistency, be easier to understand, and will include new standards for signs (size, materials, location, lighting, portability, and quantity).

We covered this in a previous blog post, and now we have an update to share with you. There will be a public hearing on September 16, followed by a Council decision on October 21. We've served on the Tree Ordinance Stakeholder Group and are pleased that the proposed amendment will result in no net loss of code required trees, while allowing more flexibility for urban sites to be developed or redeveloped! 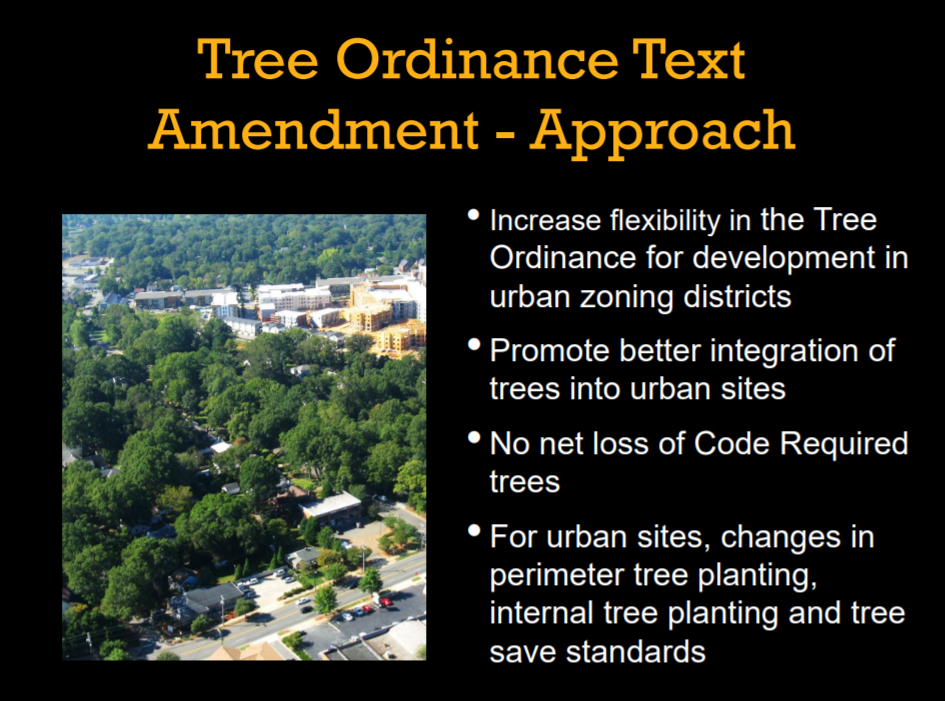 This topic was also discussed at the previous TAP meeting and covered in our last blog post. Four property owner open house meetings and a drop-in open house were held to inform the public about the rezoning process. A second drop-in open house is planned for August, but a date has not yet been set. Check the project page for updates if you're interested in attending.

So far, 222 people have played the Growing Better Places game online and 72 have played in person. Public input from people playing the game will be used to develop alternative growth scenarios for the Charlotte Future 2040 Comprehensive Plan. Here are a few results (super-duper preliminary, remember!) and our take on them:

Want to play the game and share your ideas? Sustain Charlotte is co-hosting a big game play event on August 1st with POTIONS & PIXELS and several other organizations, so get your free tickets today! Here are some more dates you can play: 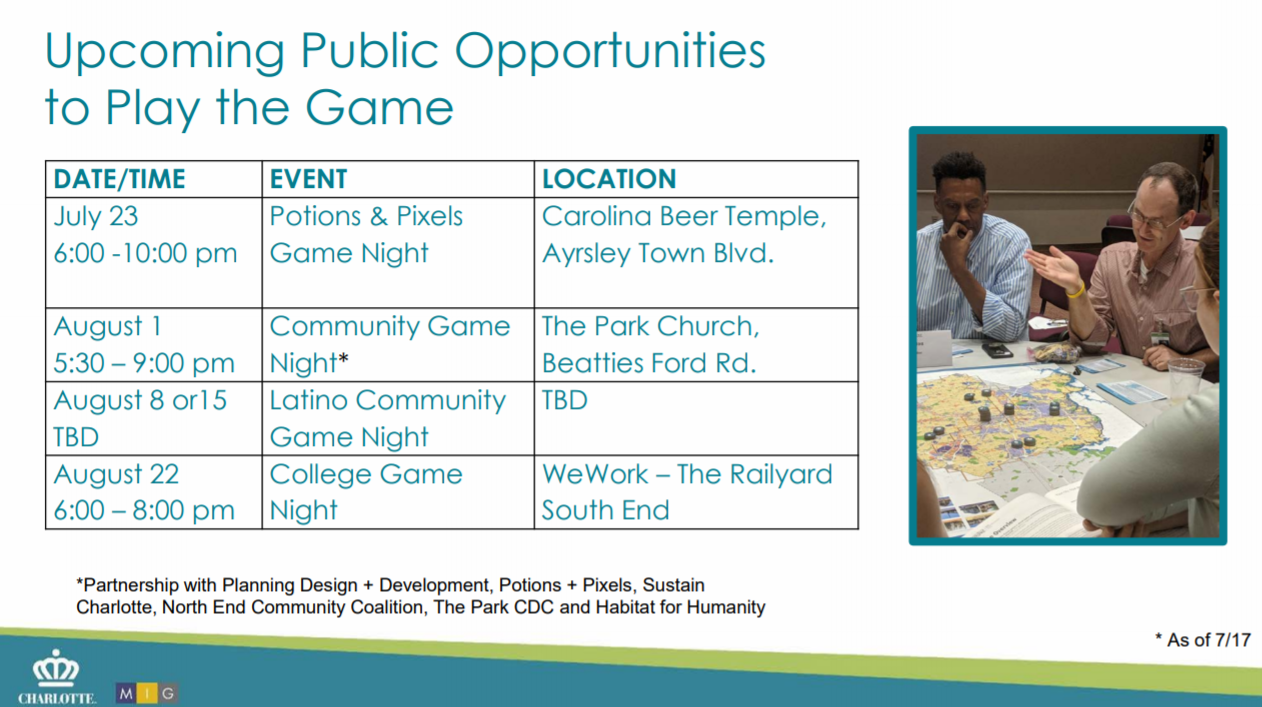 Sustain Charlotte is excited to see progress on all of these issues, as well as to be involved in all of them. Your support has allowed us to dedicate staff time to serving on the:

And most importantly, we're sharing what we hear from you with government decisionmakers as well as keeping you informed about how Charlotte is planning for future growth!

Here's a link to the full presentations that committee members saw at the meeting.