The City of Charlotte is in the process of overhauling the regulations that govern land use, zoning, planning, and development in our community. While the city has changed dramatically since 1992, the zoning codes have not been fully updated since then. The current rules contain hundreds of amendments that have caused the document to swell to over 830 pages of text and 109 separate zoning designations. There are separate ordinances for different topics that often result in confusing and even contradictory guidelines.  Currently, the rezoning process is primarily handled on a "conditional" basis, which is cumbersome and time-consuming, as each rezoning is handled on a case-by-case basis and exceptions are regularly made to the approved rules.

Charlotte’s current zoning rules aren’t adequately supporting the type of development that aligns with the city’s own vision for growth. So the Planning Department is creating a better way forward. The new set of rules that will govern development is referred to as the Unified Development Ordinance (UDO). It aims to bring together all the planning, zoning, and development codes into one unified document with clear rules that are easy to navigate for developers and community members alike.  This process began in 2013, but little progress has been made over the past five years. We wrote this editorial in December urging the City to make this a higher priority in response. 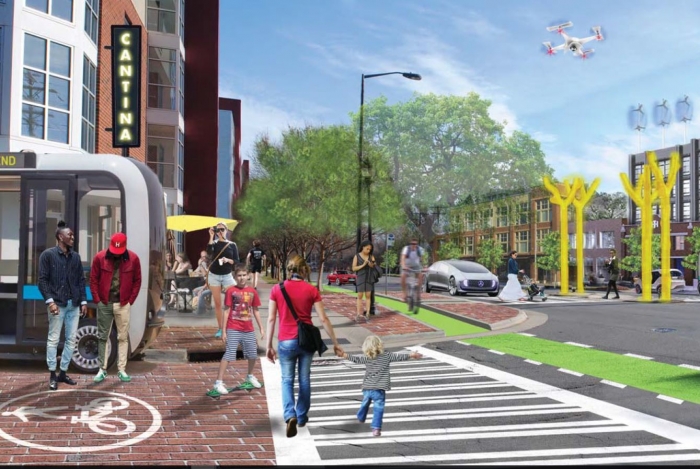 Re-thinking building use and form

Like many cities, Charlotte has a traditional zoning code based on separating properties by use: residential, commercial, office, etc. However, the national trend has consistently been moving toward combining uses, like having retail, residential, and office space all on the same site, for example. This is how U.S. cities and towns were built before traditional zoning was enacted. Think of a typical turn-of-the-century downtown building that had retail or restaurant space on the ground floor, with residential or office space on the upper floors. It’s inherently sustainable because it allows people to live, shop, and work within their community without having to drive to each destination. There’s no provision in Charlotte’s zoning that allows such a building to be constructed or used in this way.

Newer zoning ordinances allow for this mixed-use development and re-purposing of buildings by focusing more on the physical form of a building, such as the size, shape, and design, rather than its specific use. The goal is to support development that meets an area’s design standards while being pedestrian friendly and supporting a mix of uses. Many cities have revamped their rules to keep up with modern best practices.

The UDO will set rules for how we grow, and what kind of city we will be. It is important that we get it right! The UDO must reflect the growing demand for walkable, bike-friendly, and transit-oriented communities both at the neighborhood level and across the city as a whole. To achieve these goals, the UDO must be flexible enough to encourage innovation by property owners and developers. It also must have enough rules and safeguards to ensure that we don’t build our city in an unsustainable manner.

The UDO process is currently scheduled for full adoption in mid-2020. The rules governing development near the Light Rail stations is expected to be adopted later this year. Sustain Charlotte is an active participant in the process.  In fact, our executive director serves on the city’s UDO Advisory Committee, which has already been meeting for a year and half.

Build communities for people, not for storing cars

Sustain Charlotte recently submitted comments in support of ensuring the area directly around rapid transit stations like the Blue Line be pedestrian-friendly, high-density, and mixed-use.

In these comments we said that developers should be disincentivized from building excessive parking. This is an inefficient use of land made valuable through a public investment in transit. We also stated that we support lowering the maximum number of parking spaces developers can build and encouraging the implementation of shared parking. Parking decks should also be required to be built in a manner that allows them to be easily adapted in the future for other purposes such as office space.

We also made clear that we strongly support incentives for developments that incorporate affordable housing and renewable energy. In general, we believe good design standards should be required and not simply incentivized.

The UDO will impact every aspect of Charlotte’s development and, in many neighborhoods, redevelopment. Properly conceived and executed, it will help us create more efficient
transportation networks (both roads and transit), enhance access to educational and employment opportunities, ensure construction of affordable housing, improve our health, and protect our environment.