How (and why) we're speaking up for fast, reliable bus service in Charlotte 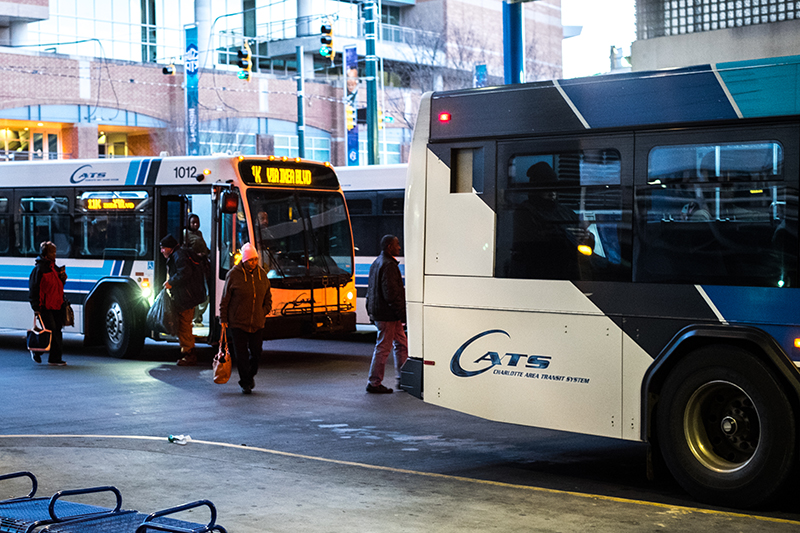 Our program director, Meg Fencil, spoke during the public forums of the May 26 Charlotte City Council meeting and the May 28 Metropolitan Transit Committee meeting in support of the new bus and bike lane pilot on 4th Street. Check out the full comments below, and watch a recording (start at 10:50 timepoint) of Meg's presentation to City Council.

For decades, streets have been designed primarily to meet the needs of people driving in cars alone, which is how about 76% of Charlotte commuters get to work. But it’s a formula that just won’t work in a city with a population growing as fast as ours.

We want all Charlotteans to have safe, efficient, affordable, and dignified transportation choices.

The 4th St. bus & bike lane pilot project demonstrated that the rate of on-time arrivals of buses to the CTC improved, bus operators liked the lane, and cyclists felt more comfortable in the lane.

Although traffic is light right now as many people are still working from home, we know that those volumes will pick up again. But as the economy begins to recover, we need that recovery to be as equitable as possible!

For an individual who may have lost months of income -- and now needs to find a new job -- perhaps in a different part of town and perhaps no longer able to afford a car -- public transit can be a lifeline to opportunity. As a bus rider myself, I can tell you there’s a big difference between a one-hour bus ride and a 30-minute bus ride!

Bus prioritization is an important part of CATS’ Envision My Ride initiative because innovations like bus and bike-only lanes, transit signal priority, and queue jumpers will enhance the speed and reliability of the bus network.

It’s not just enough to put more buses on the road. If they’re getting caught in traffic, then transit begins to lose its appeal as an efficient transportation choice!

Transit riders need service that is:

The speed, frequency, and reliability of buses are all factors that depend on buses not getting stuck in traffic. As you’re well aware, many of the thoroughfares that have major bus routes on them have become increasingly congested in recent years.

The schedule delays that have resulted in bus trip times getting longer and longer will only get worse as our population grows and more people bring their cars to drive on our streets, unless action is taken to prioritize buses.

This is the time to focus on getting mobility right. Cities across the nation (including Charlotte!) are allowing restaurants to use sidewalks and on-street parking for outdoor dining to ensure their economic survival during the pandemic. We’re recognizing that streets are one of our largest shared public spaces. So they should be used for the good of all of us, not just those who can afford -- and are physically able to drive.

We urge you to support the continued study of additional transit corridors that are in need of bus prioritization, and to make bold decisions that keep bus riders moving quickly to their jobs, homes, schools, and other daily destinations.

As the City works to create a Strategic Mobility Plan, it will be important to include strategies for making transit an appealing, viable daily transportation choice for many more commuters and “all-purpose” riders than currently use it.

More people riding transit, combined with a move towards adoption of a battery-electric bus fleet, will also help the City to reach its greenhouse gas reduction goals set forth in the Strategic Energy Action Plan. When bus lanes can be safely shared with people riding bikes, our streets become even more multi-modal!

As Council, please give the talented staff at CDOT and CATS  the resources and support that they need to fully align their work bus prioritization with the City's vision for its current and future residents.

And finally, a note on funding: As you work on the budget, we’re excited to see that many of the projects in the proposed budget include bike and pedestrian elements. We also ask you to please fully fund implementation of the Charlotte BIKES Plan at the level of $4 Million per year to help build an all ages, all abilities bike network.

Thank you for your commitment to planning for Charlotte’s future transportation needs, while also being responsive to the present crisis with fast, adaptive action. We appreciate you keeping the public input process accessible so the public can give comments virtually, and I look forward to seeing you in person again as soon as it’s safe to do so!