Here's the recommended alignment for light rail to Pineville and Ballantyne

At last week's Metropolitan Transit Commission (MTC) meeting, CATS staff shared their recommendations for extending the LYNX Blue Line light rail to Pineville and Ballantyne. Read on to learn details of the proposed alignment and how CATS used public input to guide their recommendations! 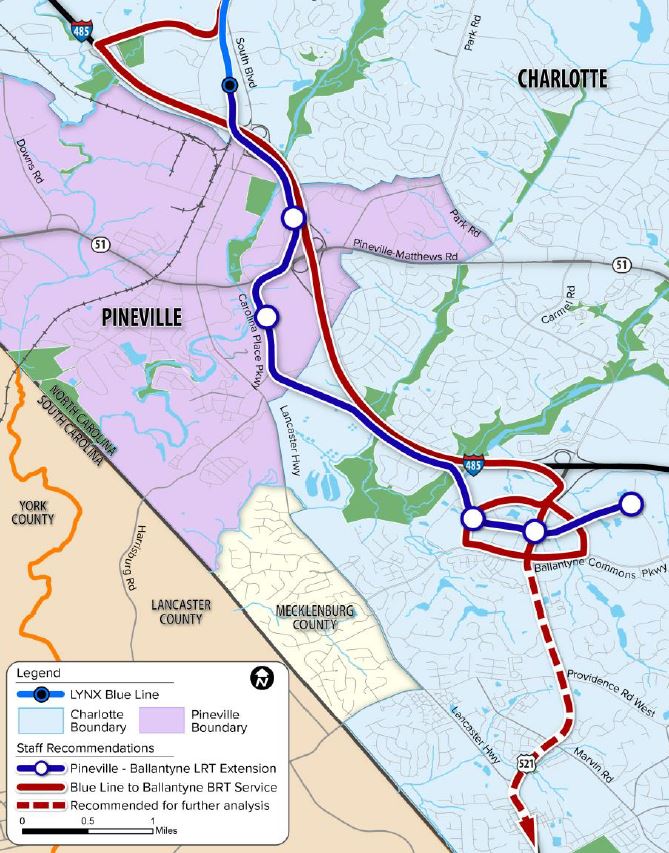 First of all, you may be wondering how this came to be. The original 2030 Transit Plan didn't include a southern extension of the Blue Line beyond I-485. Why not? Twenty years ago when the Blue Line was being planned, the Town of Pineville declined to have a station. Leaders and residents alike feared that having light rail in their town would drive dense development, change its character, and increase traffic.

Fast forward to the present day. Attitudes and interests have changed! Pineville's population more than doubled and traffic is oppressively heavy, yet there's no light rail and few easy options for getting around without a car. During the LYNX System Update and Regional Transit Engagement Series last year, there was a lot of interest from the public to have rapid transit in Pineville and Ballantyne. Then in October, the Town of Pineville passed a Resolution of Support to extend light rail to Pineville and Ballantyne. Pineville Mayor Jack Edwards continues to be a strong voice for light rail.

As a result, the MTC voted for CATS to study the possibilities for making this extension happen. CATS held 3 rounds of public engagement and established some key study goals:

Public opinion showed that Carolina Place Mall (rather than downtown Pineville) is the primary desired destination in Pineville, and destinations in Ballantyne on either side of Johnston Rd / 521 are evenly split. Next, CATS planners removed options with major challenges or barriers including floodways, wetlands, a burial ground, a major power corridor, and areas lacking station-area development opportunities.

Where will the Blue Line go?

The final staff recommendation is to extend the Blue Line light rail to Carolina Place Mall and to the Ballantyne Corporate Park. This will require close coordination with the Town of Pineville and ownership of the Ballantyne Corporate Park. Of course this project -- and the entire 2030 Transit Plan -- will require a new funding source to become feasible.

We're excited that CATS is taking a decisive approach by recommending the extension of light rail transit into an area that needs more transportation choices and connectivity to the rest of Mecklenburg County! There's a huge amount of land around both of these destinations that has potential to be re-imagined and re-developed to be more walkable.

Residents and people who work in Pineville and Ballantyne also need mobility solutions within the next decade before light rail can be built. Fortunately, the CATS recommendation includes a shorter-term plan to bring more transit to these areas by beginning bus rapid transit (BRT) to Ballantyne Corporate Park when the I-485 express lanes open.

How will transit connect South Carolina to the Charlotte area?

See that dotted red line extending to the south on the map above? This study also resulted in a staff recommendation to evaluate rapid transit corridors to York and Lancaster Counties as part of the Regional Transit Study. When asked at the MTC meeting if the Blue Line could be extended even further to the south than Ballantyne, CATS CEO John Lewis explained that light rail lines shouldn't be longer than about 25 miles. The existing Blue Line is 19.3 miles from its northern terminus on the UNCC campus to its southern terminus at the I-485 station. With the additional extension into Ballantyne, the Blue Line will be at its maximum efficient length. Staff recommends further study to determine the best alignment and mode (possibly light rail, BRT, express bus or something else) for transit into South Carolina, but it likely won't be a further extension of the Blue Line.

Follow along with the Pineville / Ballantyne study process on the CATS website. To see first-hand how transit decisions are made, come to the next monthly meeting of the Metropolitan Transit Commission. They're normally held at 5:30pm on the fourth Wednesday of each month in room 267 of the Charlotte Mecklenburg Government Center. If you want to share your thoughts with the MTC delegates, you can sign up with the clerk to speak for up to 3 minutes during the public comment period at the beginning of the meeting. We attend these meetings and share the outcomes with you, so say hi to our staff if you come!