At their meeting on Monday November 12, City Council's Environment Committee voted unanimously to advance the Strategic Energy Action Plan (SEAP) to the full Council. The SEAP will be reviewed at Council's next Strategy meeting on Dec 3 and voted on at the December 10 business meeting.

Read the comments that Sustain Charlotte submitted on the final SEAP draft. For more background on the SEAP process, check out our most recent update. 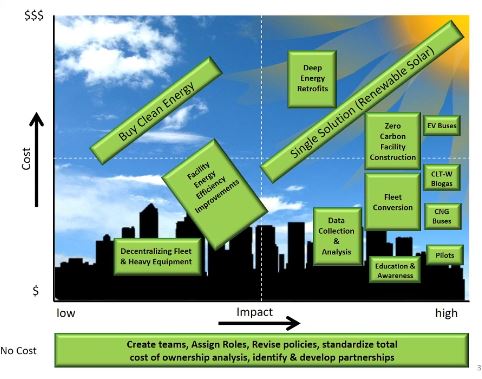 A variety of strategies at a range of costs and impact levels are being evaluated. (image: City of Charlotte)

The city's Sustainability Manager Rob Phocas opened the presentation with a review of the SEAP process. He also summarized public comments on the draft, which mainly focused on the following categories:

Mr. Phocas shared that NC Governor Cooper's executive order on Oct 29 supports statewide reduction of greenhouse gas emissions and furthers the goals of the Paris Agreement. Committee Chair Dimple Ajmera said, "We are creating a model, we're not following, we're really creating a model for others to follow." By adopting and pursuing the goals in the SEAP, Charlotte will lead the way for North Carolina municipalities to actively pursue a sustainable energy future!

The city has set some goals and associated activities to move the SEAP forward in 2019 and 2020: 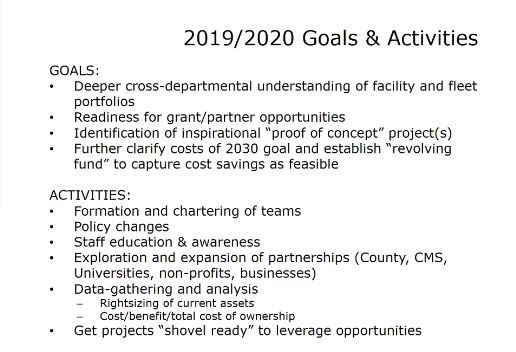 Committee members Matt Newton and Braxton Winston emphasized the importance of public outreach as the SEAP implementation begins. CM Newton asked the city to "be proactive and not rest on our laurels waiting for folks coming to us. [We should be proactive] and hold meetings to let folks know what the impacts will be."

CM Winston challenged the city to be bold and aspirational when choosing projects to reduce greenhouse gas emissions: "What we carry out can influence other entities to do similar things...We need to think about putting "moonshot" ideas out there over and over again...If we take advantage of all the flat surfaces that we have on our buildings and city-owned parking decks and solarizing them, that's going to cause some conversation in our community, and other people are going to ask "Why aren't we doing this within our entities?"

He continued by addressing transportation: "Or working with CATS to find some type of solution to a passenger car-free Uptown during the workday...We're not going to be able to get there on our own...Everyone' doing fleets. That's smart. That's logical...But how can we push the community? Let's set the model, let's set the example." We agree with CM Winston that changing Charlotte's transportation patterns to reduce single-occupancy vehicle trips with a transit-based solution would make a huge impact!

CM Egleston made a motion to approve the SEAP and forward it to the full Council for consideration. The motion was unanimously approved without further discussion. Committee Chair Ajmera publicly acknowledged all the stakeholders who have contributed to the SEAP's creation.

CM Tariq Bokhari had made a request at a previous meeting for a presentation about Charlotte's bus fleet and its efforts to reduce emissions. Charlotte Area Transit System (CATS) CEO John Lewis shared an overview.

Nationwide, diesel transit vehicles continue to dominate the market. But there's a downward trend in their use. 16.9% are hybrid electric and 16.7% are CNG. All other alternative fuel technologies including electric, hydrogen and solar are currently less than 1%.

But here's the problem: In order to be eligible for the full benefits of federal funding to buy transit vehicles (which the vast majority of U.S. transit agencies use, including CATS), agencies must adhere to Federal Transit Administration (FTA) standards of "useful life" for vehicles. Lewis said, "That has pushed towards a slow evolution of technology. The bus that I buy today I must keep for the next 13 years or 500,000 miles." Because buses sold in the U.S. are built well, the useful life requirement has slowed the adoption of cleaner energy technologies.

CATS' 5 year Capital Program includes $66M to replace up to 120 buses. Funding restrictions will likely disallow purchasing of electric buses from China. Unlike the Chinese-made buses that charge as they run, the leading U.S. bus manufacturer produces buses that require external charging stations. When CATS did a review of a transit agency in Florida that's using these buses, they found that the buses had to draw a large amount of energy from the power grid during peak service hours when energy demand from homes and businesses is also highest. That could be a problem, especially on very hot days when air conditioning use is high. Electric buses are almost double the cost of diesel buses, so CATS would not be able to fully replace its fleet with electric buses at the level needed to maintain service with current levels of funding. Mr. Lewis presented a comparison of electric and compressed natural gas (CNG) bus net operating cost: 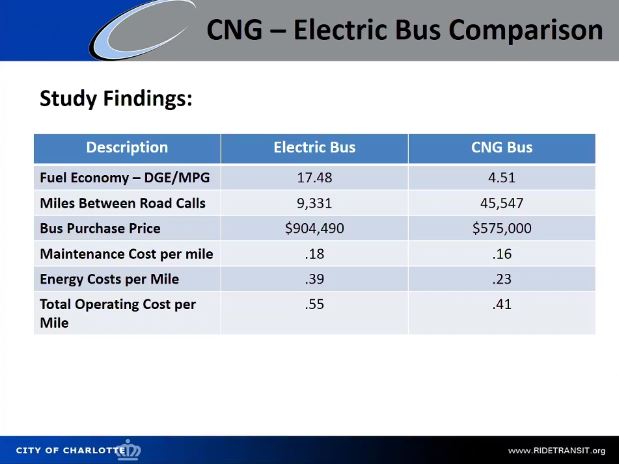 CM Ajmera asked, "What if the cost if we do not do this [adopt electric buses], in terms of our health [and other outcomes]?"  CM Bohkari expressed interest in the emerging technology alternatives, but wanted to know if investment in alternative fuel technologies will really move the needle on environmental health. 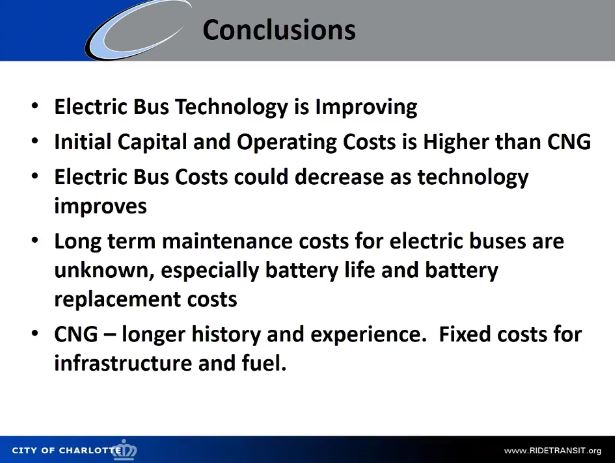 CATS' current strategy is to move away from diesel vehicles and towards CNG. We applaud the move away from diesel vehicles due to their harmful effect on local air quality. However, CNG is still a greenhouse gas that contributes to global climate change.  A shift to electric buses needs to occur. Recognizing the reality of cost unknowns and still evolving technology of electric buses as well as the need to not reduce bus service by having fewer buses than needed, we encourage CATS to closely monitor electric bus technology and pursue a move towards an electric fleet as soon as possible.

Watch the video stream of the meeting.

The Environment Committee is scheduled to meet next on December 3 2018.