What makes a street great?

NACTO, which stands for the National Association of City Transportation Officials, recently held their 5th annual conference in Seattle. We were able to attend and learn about the latest advancements in building sustainable transit, cycling, and pedestrian infrastructure thanks to a generous grant from our friends at TransitCenter.

Charlotte is a member city of NACTO, with our Department of Transportation Director, Danny Pleasant, serving as treasurer.

As we work to design Charlotte for the projected population boom predicted to take place over the next 25 years, it’s encouraging to keep in mind that NACTO exists to promote safe, energy efficient, and environmentally sustainable transportation projects and systems.

The reason this matters to you, the average person just trying to efficiently move throughout our city, is that NACTO has created some very important design standards in the Urban Street Design Guide and the Urban Bikeway Design Guide.  These two documents are crucial for any city that wants to aggressively pursue smarter street design.  We're all painfully aware of how our cities have been designed and built in past decadees to accommodate the personal automobile (if you’re not, just try riding a bicycle into or out of Uptown during your average rush hour and try to ignore the lack of space you have).

All cities in America are facing the same challenge: Engineer Fear.

The people who make the last call as to whether or not a protected bike lane or a pedestrian island or any other street calming, public-life producing design will make it into our streetscape are our cities' engineers.  And they all operate on a singular philosophy: “It’s your license, it’s your liability.”

We can pretend that our barriers are institutional, financial or political ( factors which do play their respective roles). However, at the end of the day, if our engineers don’t have guidelines that are boiled down to hard, structural language (technical language with specific detail), then we will not see any improvement in our largest shared public investment - our transportation system.

We have to equip our city’s engineers with this knowledge, as well as experiential knowledge of how these types of facilities work on a mass scale.

When streets are designed to accommodate the needs of transit riders, everyone who uses those streets benefits. But why do some cities enjoy high rates of transit ridership while others struggle with stagnant or declining ridership? The key lies in the quality of the experience for riders.

Public transportation that is frequent, reliable, and easy to walk to attracts new ridership. Research by TransitCenter indicates that the mode of transit, whether bus or rail, matters far less than these factors. That's good news here in Charlotte because even though we're building more rail projects, about 75% of daily CATS trip are taken by bus.

A great street for transit prioritizes the efficiency of transit vehicles, including such features as dedicated bus lanes and prioritized left turn signals for buses. 80% of transit riders walk to and from their stop/station. Transit-friendly streets meet the safety and accessibility needs of riders by providing quality sidewalks, crosswalks and signals, shelters, and benches.

We must learn from others.

A thirteen block stretch of this main downtown street in Seattle (photo below) was turned into a two-way protected cycle track. Bicycle ridership along the route then increased by over 800%!  It started off as a demonstration project.  People on bicycles chose this route over most other ways to cross the city.  Now a 5 million dollar renovation project is underway to make the thoroughfare even better for bikes.  “Pork chop” parking delineators will be removed to allow room for additional 2-way lanes (and yes, the parking is going away).  The barriers used to separate the bikes from cars will be changed from white painted lines, and tuff posts will be turned into raised curbs and planters.  Additionally, left-turn protected signals will allow bikes and cars to each safely maneuver through intersections without fear of collision. 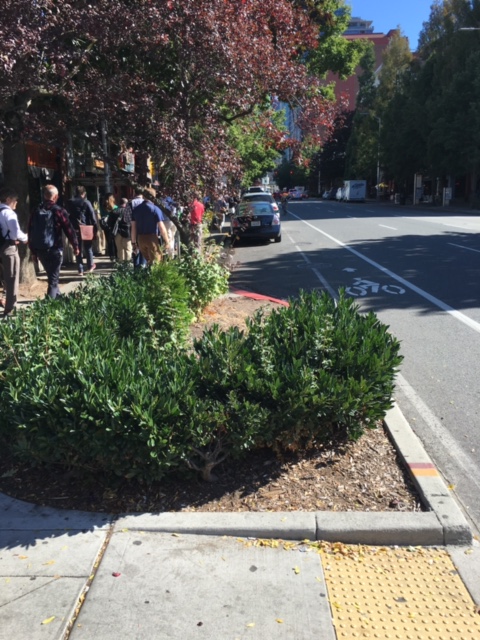 "Pork chops" like this unnecessary section of planted space could be removed to provide space for people. 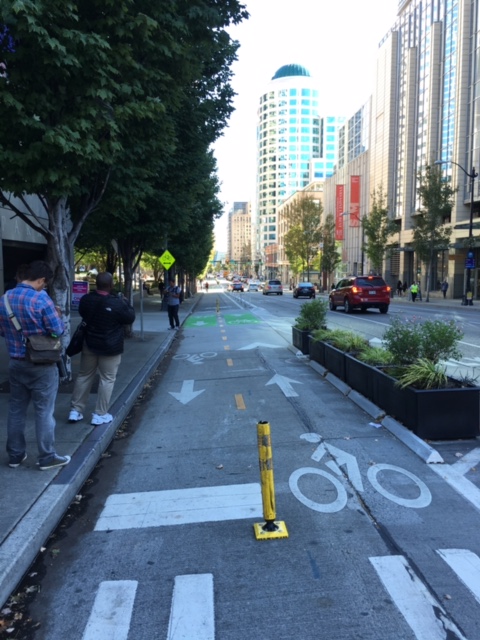 Planters are a low cost and attractive way to separate cyclists and automobiles.

This new cycle-track will connect to other street improvements in the city and allow people on bikes in Seattle to access a functional network that will connect them to any point in the city they need to get to.  As our region develops the Cross Charlotte Trail, the Blue Line light rail extension and the streetcar system here at home, we need to keep in mind that connectivity between these projects is the best practice and the best way to fully realize the benefits of investing our transportation funding on sustainable solutions.

The conference was headlined by Janette Sadik-Kahn, a veritable rock-star in the world of transportation.  She served as the commissioner of the New York City Department of Transportation, and under her leadership the Times Square pedestrian plaza became a reality.  However, she brings to light disturbing figures about the reality in which we live: namely, that there were over 30,500 deaths in our nation last year because of automobiles.  Imagine being inside BOA stadium for a sold-out Panthers game and sitting on the 50 yard line on the second level.  Imagine that every fan you saw from one goal post to the other, halfway around the entire stadium, would have their life ended by an automobile accident.  This is what we’re facing annually.

The people you meet.

As with any conference there is always much to digest.  Experts from Gehl Architects and People for Bikes discussed the importance of listening to the community first.  What comes to mind when most people imagine transportation projects are large, multi-million dollar undertakings replete with blinking lights and cones and delays.  But this isn't always the case. The NACTO conference sparked many conversations about how far from the truth this is.  “Transportation” is the action of transporting someone or something or the process of being transported.

Where can we transport others to in our city?  Over the week I saw inspiring designs, cool new cycle-tracks and incredible visions for what our future streets might look like.  I talked with people about driverless cars and heard predictions that one day soon “rails to trails” projects will be replaced by “interstates to trails.”  I made bold predictions of my own about people embracing the bicycle and the impact that high-efficiency, clean-energy electric motors are going to have.  I even saw firsthand how people in the South Lake Union area are commuting by kayak, and it made me smile.

But the most moving presentation I saw was about one small project in Chicago.  Gia Biagi with Studio Gang outlined what had happened when a new rail line station came into a poor neighborhood.  She detailed the changes, the businesses (McDonald’s corporate!) that moved in, the change in the businesses, the vibrancy that it brought.

However, somewhere along the way, something went wrong.  Violence in the neighborhood seemed to be increasing and the success of the project was undermined by gunshots and crime.  Why?  What had caused the increase?

None of this came to light until a visionary project to reimagine the use of a police station and its civic resources took place.  The designers noticed that the police parking lot was ineffective.  It was only being used a couple of times a day, in the morning and evening, at shift change.  So they envisioned, and built, a half-court basketball area in the underutilized space.  Now cops would have a place to shoot hoops along side members of the community.

The day the project opened, before the gigantic scissors sliced through the ribbon adorning the new project, a group of boys walked by with a basketball in hand.  When they saw the park they excitedly asked, “Can we play here?”  Gia, the designer said, "Of course!". The boys ran excitedly onto the court and began to play.

After the ceremony, she talked to the guys who christened the court and found out why so much violence had been occurring recently.  The city learned that the revitalizing transportation project had actually taken place directly along a long standing gang border. The construction was directly sending gang members into one another’s path.  These kids were suddenly forced to walk through a war zone.  When we plan our city and we think about design, we must keep in mind the fact that this is our natural environment, replete with all realities good and bad.  And we must also keep in mind that small projects can transport our city’s residents in a very large way.