Daniel Crow moved to Charlotte from one of the top biking cities in the nation: Madison, WI, where even the layout of the city itself suggests a giant bicycle wheel.  In the city center, the state capitol building and university campus are joined by a single pedestrian road—State Street—where all cars are strictly forbidden. Shooting out from this urban hub, like spokes, is a crisscrossing network of bike lanes and trails, which graduate students and young professionals ride into town on weekdays and out into the countryside on weekends. 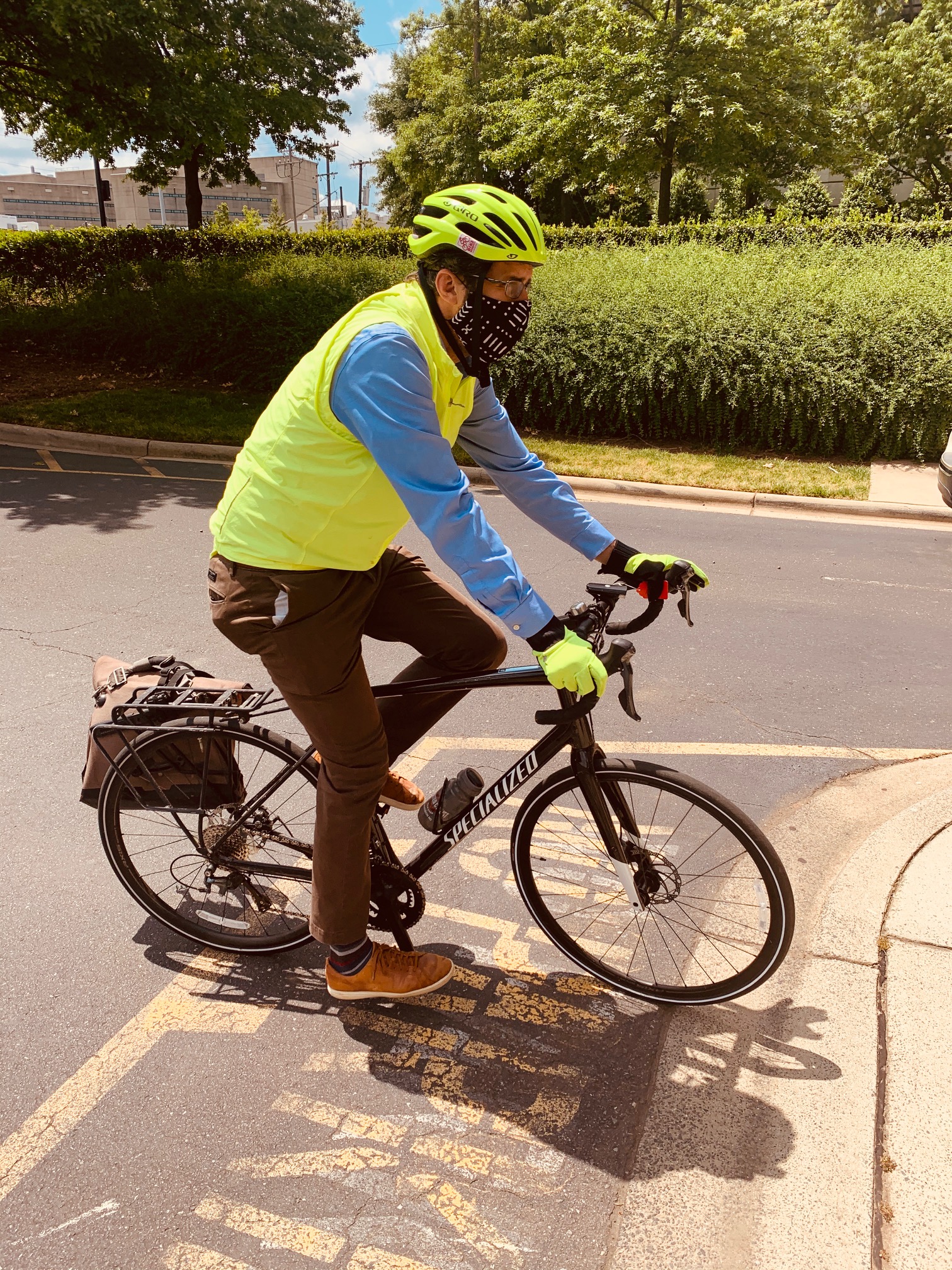 After living and biking in Madison for  almost a decade, Daniel decided to migrate South to be closer to family and to escape those terrible winters (through which he proudly and miserably biked).  By the time of the move, he was too committed to biking to consider giving it up.  He decided that biking would remain his primary mode of transportation even as he moved from one of the best biking cities in the nation to one of the worst: Charlotte.

Beyond Charlotte’s poor infrastructure, Daniel also found a cultural attitude that made biking challenging.  Just as there were not enough affordable homes to go around, there was also a dangerous shortage of bike lanes.  To get from Point A to Point B, bikers almost always had to hop on a main road.  And when they did, they shared the road with a frenzied urban workforce that was not always willing to patiently suffer the inconvenience of a cyclist in their path.  Especially during rush hour, most drivers had a bottom line of getting to work on time.  And if some biker in a neon vest slowed down the lane and made this more difficult, drivers occasionally lashed out.  During his first month riding in the city, Daniel was honked at, flipped off, and inadvertently run off the road.

To make biking easier, Daniel strategically selected a home and workplace that were near the same greenway. His apartment in Dilworth was less than a block from Sugar Creek Greenway.  And once on the greenway, he enjoyed a serene two-mile ride uptown. His commute became treacherous only when the greenway ended and he had to turn and ride on the narrow sidewalk of 7th Street over the highway.  In this “tightrope ride of death,” as he calls it, if he tipped over to the left, he plummeted fifty feet into the bone-crunching traffic of I-277 below; if he tipped over to the right, he fell into a single-file line of oncoming traffic. And if he made it safely across the tightrope, he advanced to an even deadlier stunt at McDowell and 6th.

At McDowell Street, a highway running around the city, I-277, turns into 6th Street, a road running through the city.  The problem is that most cars passing nominally from I-277 onto 6th Street don’t notice the change and still drive like they are on the highway.  To get to his workplace, Daniel had to finesse a Frogger-like maneuver where he turned right onto 6th Street and then turned left off the wide road within the same block. As he timed his turns in between deadly formations of cars, he realized that it was only a matter of time before he found himself flattened like the old videogame character.

But before any such thing could happen, painted arrows appeared and pointed to a safer way.  The first arrow appeared near the end of the greenway and directed Daniel to where he always biked anyway—across the tightrope ride of death.  When he rode to the bridge this time, however, there were two bright white lines painted in the asphalt between the sidewalk and the road.  With the bike lane in this position, the elevated sidewalk would become no longer a tightrope of death but rather a buffer against a deadly fall.  And on the other side of the bike lane, foreshadowed by a series of painted dots, would soon be raised a steel barrier to protect bikers against oncoming traffic.

Soon after Daniel crossed 7th Street, another series of arrows guided him along the sidewalks in what was, again, his normal route.  There was another bike lane on 6th Street (and another suggestion of a physical barrier—this one to protect bikers from cars blasted by the interstate).  What gradually dawned on Daniel was that his morning route would be perfectly lined, within the next few weeks, by bike lanes and benevolent arrows.  If you drew a map of Daniel’s morning commute, and a map of the new network of bike lanes in that area, you would be looking at one and the same map.

“When all of the bike lanes were finished and I rode the perfected route for the first time, I was overcome by a feeling of gratefulness to whatever Higher Power was protecting me on my path,” Daniel said.

Sustain Charlotte advocates for bikers like Daniel to have greater protections and a comprehensive bicycle network to get to their destinations safely. From the beginning of Uptown Connects, Sustain Charlotte partnered with the City to engage the community. The goal was to bring attention to how important a higher quality bicycle connection was needed across Uptown. This undertaking was accomplished through temporary pilot projects, which allowed people to enjoy what it was like to ride in comfort. 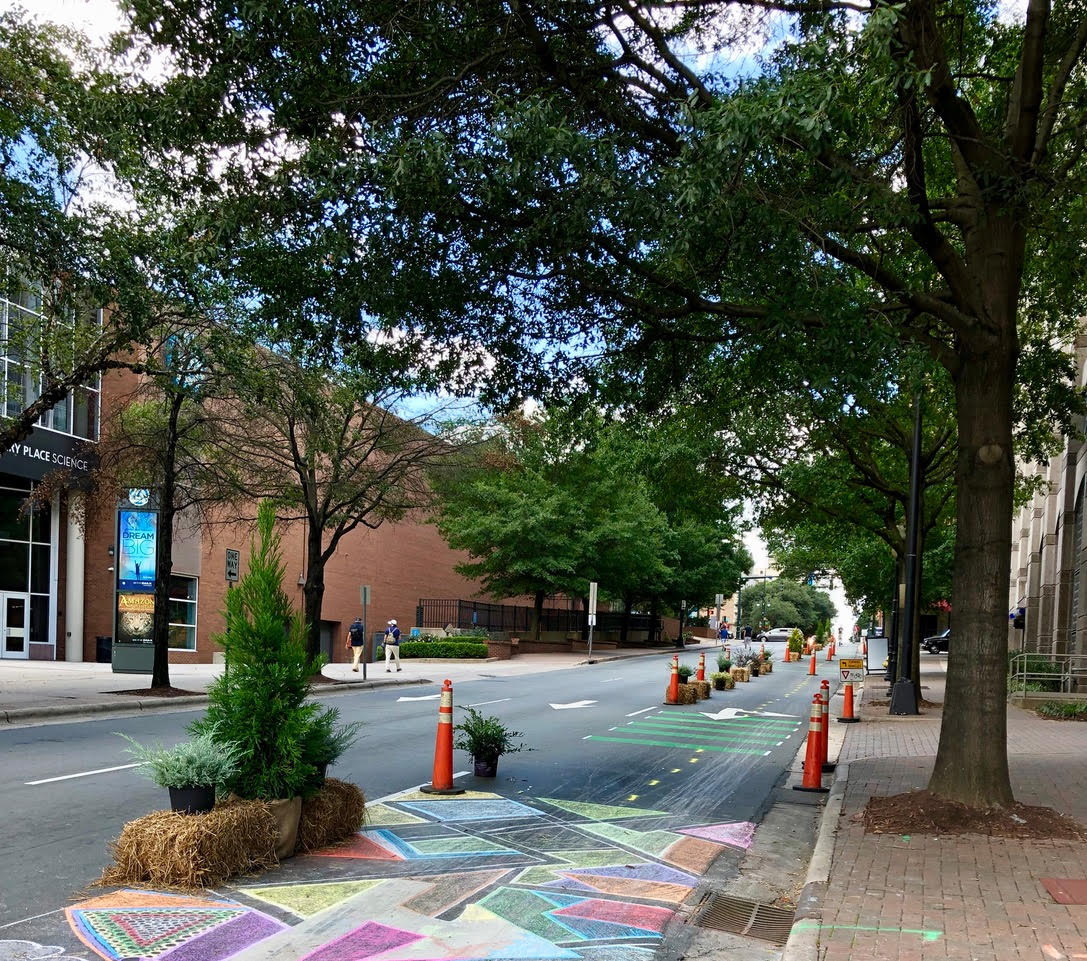 “I am grateful to SustainCharlotte for allowing me to pursue my passion of biking without risking my life," Daniel says.

At Sustain Charlotte, we're huge advocates of the infrastructure that makes biking safer for cyclists like Daniel. Want to learn more about what we're advocating for now? Join our upcoming webinar on June 10 to hear about how we're working with Charlotte DOT to bring protected bike lanes to Charlotte. More details here!