Ever wonder how Charlotte City Council splits up the work of governing a city of over 800,000 people? Committees, of course! There are five committees, or "Focus Areas", that council members serve on. Here's what the Environment Committee is up to as they kick off 2016.

Since three of the five members are newly appointed to their committee roles, city staff took some time to review the Fiscal Year 2016 Focus Area Plan for the Environment Committee.

This plan is the most visionary it's ever been, and we're thrilled about that! Council member John Autry commended city staff on establishing baseline indicators for the plan's goals around water, energy, waste, air, and Smart City (using technology to improve efficiency of operations). "It's been a long time coming and I'm really glad to see it happening!" said Autry.

Assistant City Manager Hyong Yi explained that there are goals for both city operations as well as the overall population of Charlotte. "What's new about this plan compared to previous focus area plans is how we've split the goals into sections. How are we making the city's operations better? And what are we doing to make the community better?"

Then it was time for some trash talk. Director of the city's Solid Waste Services (SWS), Victoria Johnson, talked about the challenges of meeting the city's goals for waste reduction. She summed up her major concerns with a slide titled "What Keeps the SWS Director Up at Night".

1. Lack of an integrated waste system: Did you know that the City of Charlotte picks up trash and recycling from single-family homes, but then Mecklenburg County is responsible for disposing of it? As Council member John Autry pointed out, "Our ability to divert more from the landfill is limited by (the City) only being in control of collection, not disposal."

Our take: This is an ongoing challenge for Charlotte, but we shouldn't let it stand in the way of diverting waste from the landfill. An example of a great choice made in the past was when the city began collecting yard waste to be composted instead of landfilled.

The city could pilot a volume-based waste disposal program. Numerous large and small cities including Austin, St. Louis, and even our neighbor Gastonia have drastically reduced how much waste goes to the landfill by charging customers based on how much trash they send to the landfill rather than charging every customer a flat rate. We think that's pretty fair! Do you recycle as much as possible and only need to set out a small trash can each week? Why should you have to pay the same as your neighbors who toss everything into the trash?

2. Concern about traveling the road to Zero Landfill: Waste departments make money by selling the recyclable materials they collect.  Unfortunately, the prices they receive for those materials are dropping globally.

Our take: We're optimistic that SWS can overcome this challenge, because we're in good company. This is a challenge that every other city is also facing.

Let's take note of best practices from around the country for maximizing our revenue from recycling. One way that residents can help is by recycling properly. Keep contaminated and non-recyclable materials out of your recycling bin. They lead to lower revenues when the material is sold.

When all is said and done, we need to maintain and strengthen our recycling program because it's critical to becoming a more sustainable city. As the second fastest growing large city in the nation, building more landfills to bury waste that could easily be recycled is a terrible use of our precious remaining open land. And trucking our excess waste out of the area wouldn't exactly be a sustainable alternative to dealing with it locally.

Our take: Growing Charlotte sustainably will require more construction of condo and apartment buildings. That's a pretty smart way to grow because it concentrates growth in a smaller area, which protects open land while also making it easier for people to walk, bike, and ride transit to work.

But living in a multifamily building shouldn't come at the price of not being able to recycle. Although there are free drop-off recycling centers throughout the county, many apartment residents are unable to drive to them often enough to drop off their accumulated recyclables. Others cannot drive at all.

This morning I snapped a few photos at my apartment complex to illustrate some of the frustrations that I and many other apartment-dwelling Charlotteans experience. 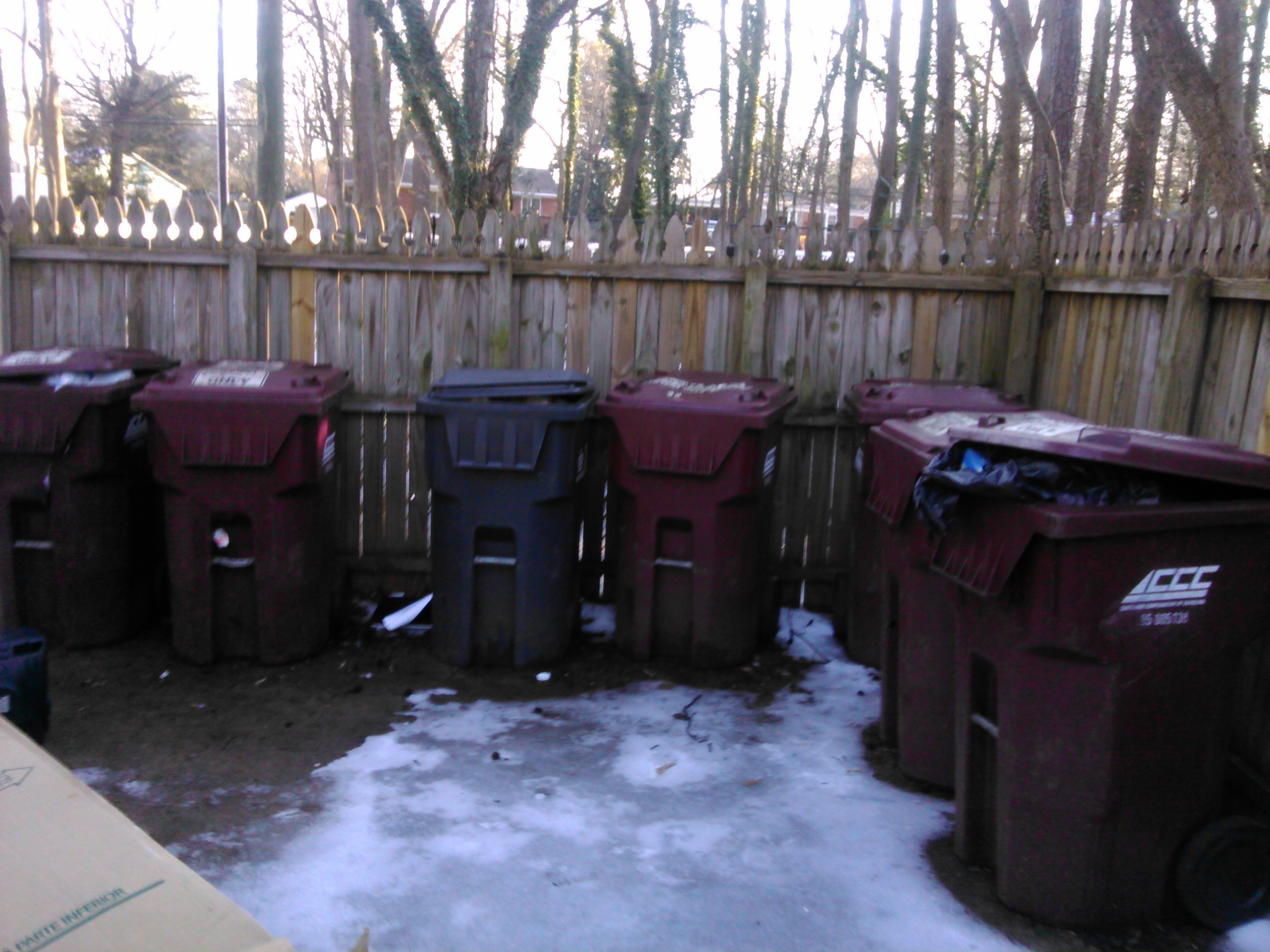 My apartment complex has 7 recycling bins for hundreds of residents, and they're a 5 minute walk from some units. 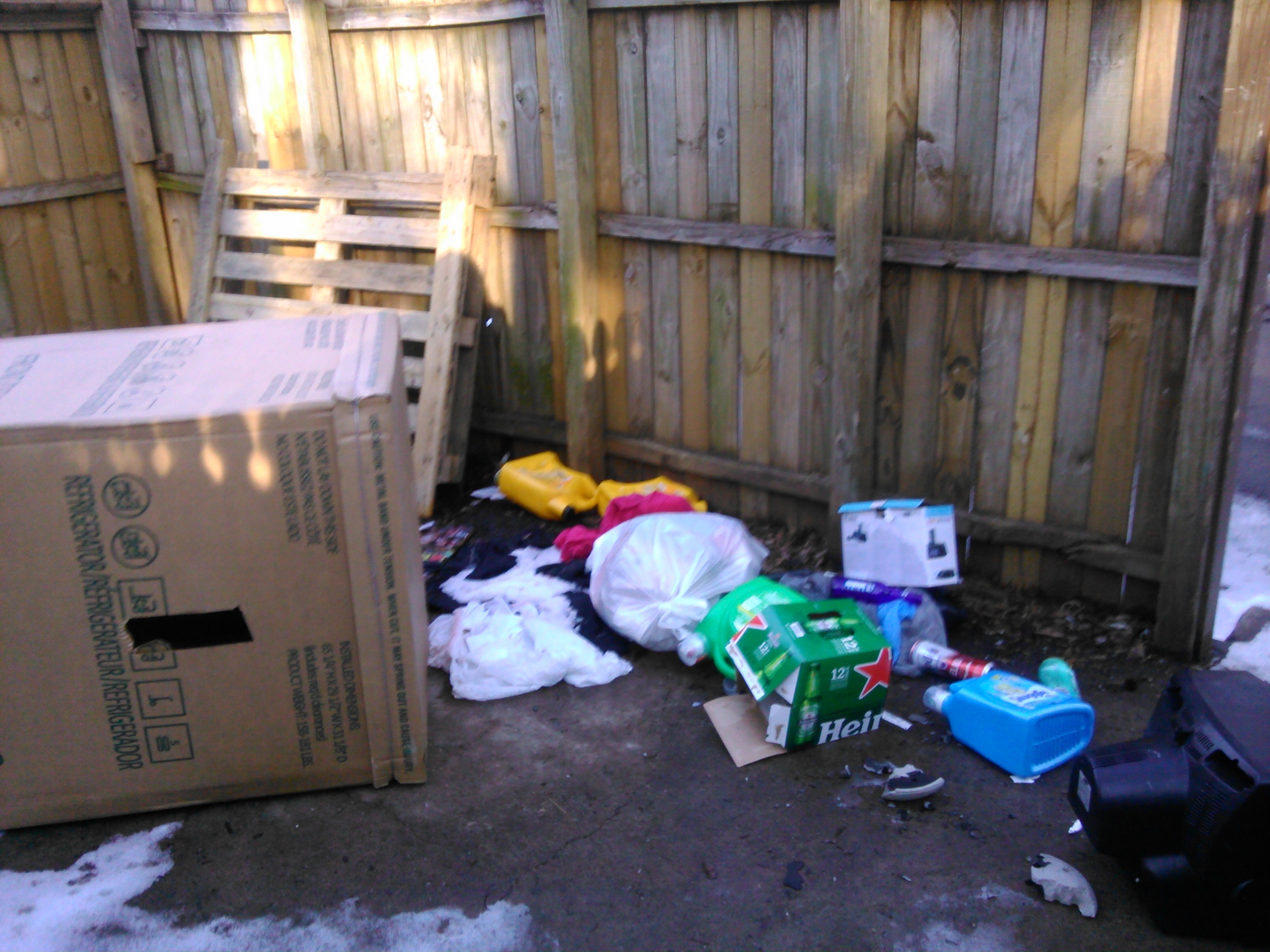 Some days there's so much trash dumped in the recycling area, it's impossible to reach the bins.

And this is at a property where recycling is at least offered! Is it fair to allow owners of apartment complexes to choose whether or not to offer recycling service to their residents? We're big fans of multifamily housing because it's overall a very sustainable way to live. But the ability to recycle at home shouldn't be a privilege only available to residents of higher income properties where property owners recognize recycling as an amenity. Recycling should be provided as an essential service to all residents, with the same priority as providing heat and water.

4. Solid Waste Study: Charlotte is reviewing its entire process of waste collection and disposal to determine how it can be improved. The Environment Committee will hear a report on this study at their February meeting before it's taken to the Budget Committee.

Our take: We're eager to hear about the findings of this study and hopeful that it will lead to bold action to divert waste from the landfill.

Interested in attending an Environment Committee meeting? They're open to the public and we attend most of them, so drop us a comment and we'll look for you at the next one! Meetings are typically held held in room 280 of the Charlotte-Mecklenburg Government Center (600 East 4th Street) on the second Wednesday of each month. Always check the agenda before going in case of cancellation or room change.