Is the current draft of the Charlotte Future 2040 Comprehensive Plan the vision that Charlotte needs to grow in an equitable, authentic, integrated, and resilient way for decades to come?

This was the essential issue that Charlotte City Council's Transportation Planning and Environment Committee discussed at a special meeting on Monday, April 19th.

Following the public hearing for the plan, city staff have been working to address concerns raised by the public and Council members. 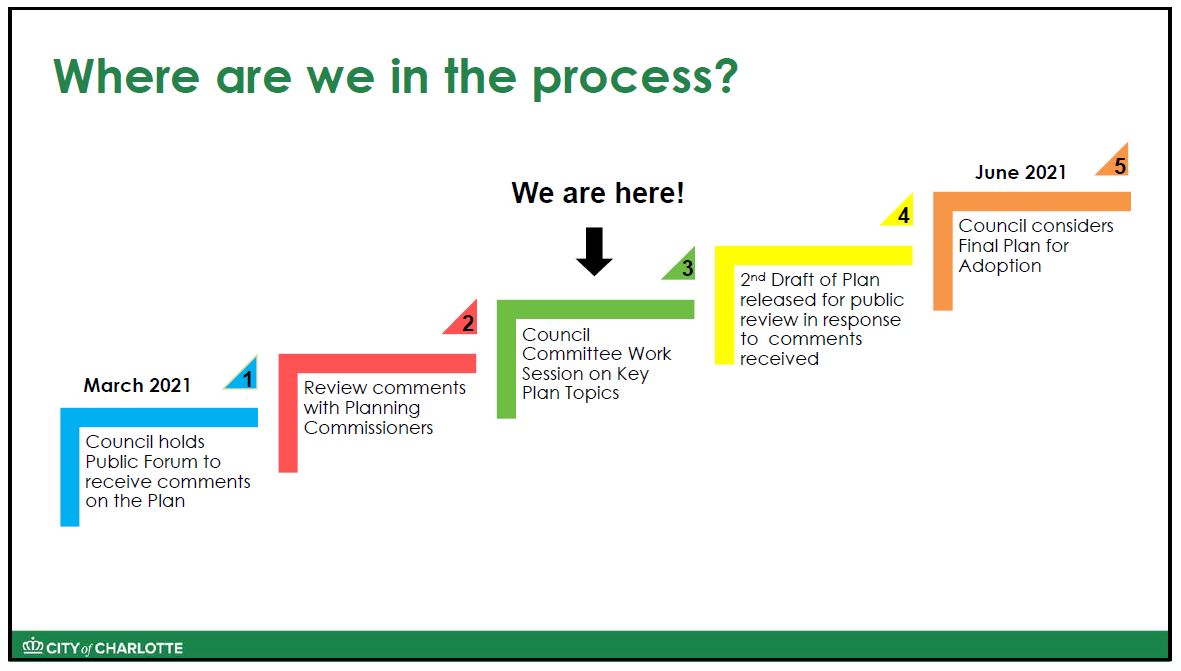 1. What is Goal #2 (Neighborhood Diversity and Inclusion) intending to solve and are there other ways to accomplish these objectives?

A range of housing options within neighborhoods will offer more opportunities for home ownership and rental to people of different ages, backgrounds, and incomes.

Policy 2.1 in the draft plan would “Allow duplex and triplex housing units on all lots where single-family housing is allowed and require conformance with residential lot size requirements, setback requirements, and other site development standards specified within the Unified Development Ordinance (UDO).” 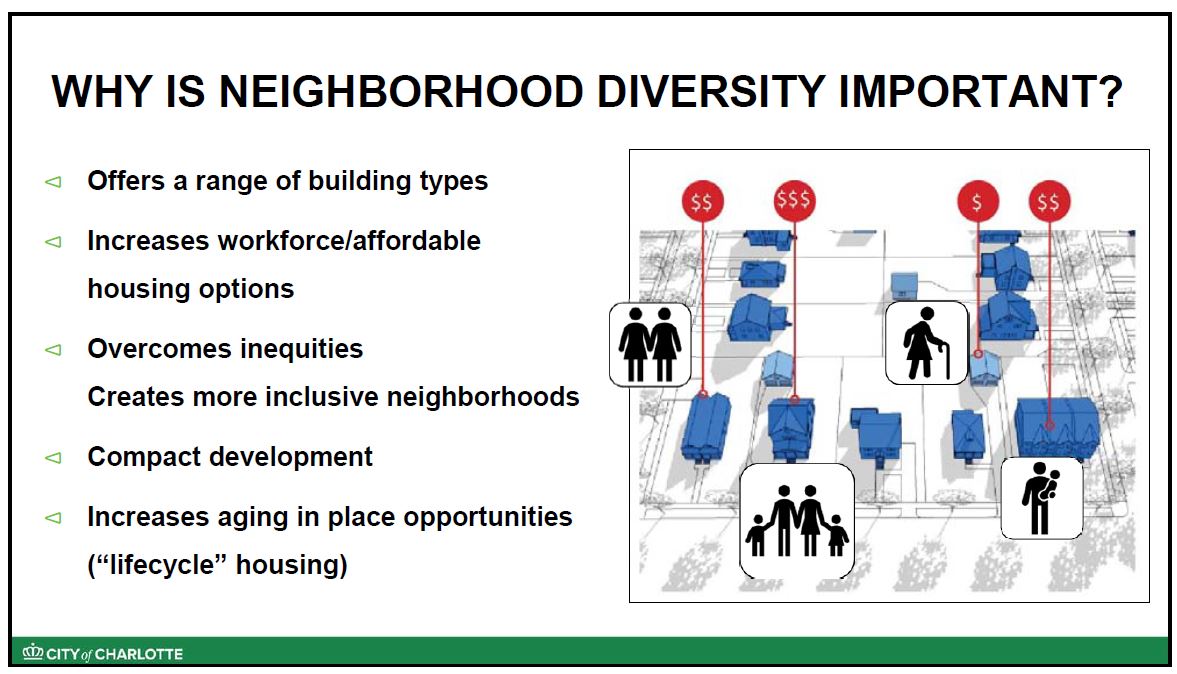 We were disappointed to see Council members Newton (District 5) and Driggs (District 7) were steadfast in their opposition to allowing more housing choices. Policy 2.1 is one of the very few tools that the City has to support "missing middle" housing, which would include choices beyond the single-family houses and apartments that largely dominate the market currently. It's important to remember that market forces will still be at play after the plan passes! Upzoning is a much gentler and more natural solution than mandates to build affordable housing.

This policy isn't about government controlling what home types are built. It's actually about relaxing the current zoning that has led to about 80% of Charlotte's land only allowing single-family homes, but still maintaining high standards including setbacks and height limits. It's about giving choice back to homeowners to use their land in a way that makes sense, such as building an accessory dwelling unit to allow an elderly parent to live on the same property, or to build a duplex to live in and rent out the other half for income. Currently, it's very expensive and time-consuming for a property owner to go through the re-zoning process to have uses other than single-family approved for a lot.

Lots of small-scale housing diversity exists in some of Charlotte's neighborhoods! We want to see all residents across the city have opportunities to live in homes like this if they wish. 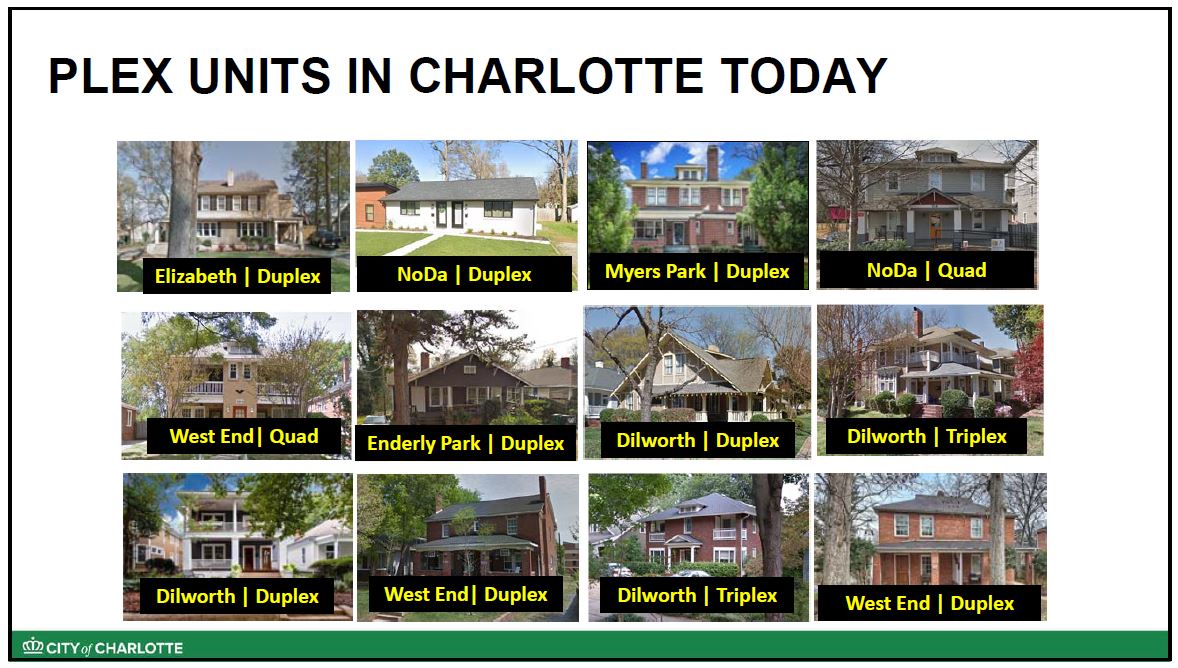 Council member Egleston (District 1) expressed concerns that allowing 2/3/4 plexes could accelerate the displacement of existing residents. Our perspective is that displacement is already happening (as small single-family homes are being purchased, torn down, and replaced with much larger single-family homes), but allowing more small-scale density in the form of 2/3/4 plexes would likely have several results that would support housing stability and quality of life:

We agree with Mayor Pro Tem Eiselt's request for Council members who are opposed to elements of the plan to propose alternative solutions rather than "kick the can down the road". Charlotte is growing too rapidly for us to be able to grow in an unintentional way and hope for a good outcome. We've already seen that it doesn't work well.

The committee asked planning staff to make revisions to Policy 2.1. We're concerned that the proposed change to allow 2/3/4/ plexes on all Place Types (with community input) instead of all SF lots could create an uneven playing field and result in the perpetuation of inequitable land development and housing. Neighborhoods whose residents have time and expertise to provide a lot of feedback would be more likely to see Place Types within their neighborhoods mapped as they suggested. Underresourced or less organized neighborhoods might end up being mapped in a different way than wealthier neighborhoods whose residents are more organized. In order for this approach to work, there would need to be clear equity, mobility, and anti-displacement metrics and considerations that are applied objectively during the mapping process. We still believe the most equitable path is to apply Policy 2.1 to all current SF lots (except those already excluded by HOAs and restrictive covenants).

2. How will the 10-minute neighborhoods be applied in Charlotte?

Imagine being able to reach essential amenities, job opportunities, grocery stores, parks, schools, dining, high-performance transit stops, and more within a 10-minute walk and bike ride from home? It's a reality for residents of only a few Charlotte neighborhoods today.

We're thrilled to see that this goal wasn't controversial in the committee meeting and will likely remain unchanged in the plan. While not every neighborhood will become a 10-minute neighborhood by 2040, it's critical for the City to pursue the goal of reducing the need for residents to drive.

3. How do we resolve areas of conflict within the plan?

It's important to remember that the plan will not be carved in stone once it passes in June. It will be a living document that will be updated based on feedback from City staff, elected officials, and residents. And we think that's really important because cities grow, change, and evolve! There's no way we can fully anticipate what Charlotte will need in 2040. This plan is our best path forward because it's based on input from more than 5,500 residents, informed by best practices and results from peer cities, and carefully crafted by planning staff who are pushing Charlotte to be aspirational yet realistic.

Council member Driggs shared a concern that developers' input hasn't been fully heard and incorporated into the plan. We agree with Mayor Lyles' and Mayor Pro Tem Eiselt's response that developers have been invited to join all the public meetings and have been deeply engaged, but that this plan belongs to the whole public.

All images in this blog post are from the TPE Committee meeting notes, available for viewing here.

Video of the recorded meeting can be viewed at the City of Charlotte's Facebook or YouTube channel.