At the April 23 meeting of Charlotte City Council's Transportation and Planning Committee, Council Members voted unanimously to recommend that the full Council adopt the University City Area Plan (UCAP). The corrective re-zonings within 1/4 mile of University City light rail stations that 230 of you asked for by signing our online petition will likely not be voted on when Council votes on UCAP approval. Instead, the appropriateness of corrective re-zonings will be evaluated by the Transportation and Planning Committee separately following a report from Planning Department staff in four to six months.

Planning Department staff presented a summary of comments received in the past several weeks and at the April 13 public comment session (click here to read what we told Council on behalf of more than 200 residents). Staff revealed resident and landowner concerns about building heights, transition areas between stations and neighborhoods, providing active uses for ground-level buildings, and other topics.

At the conclusion of the presentation, Council Member David Howard asked the same question we had: "Why weren't corrective re-zonings included (as a topic in the presentation)?" 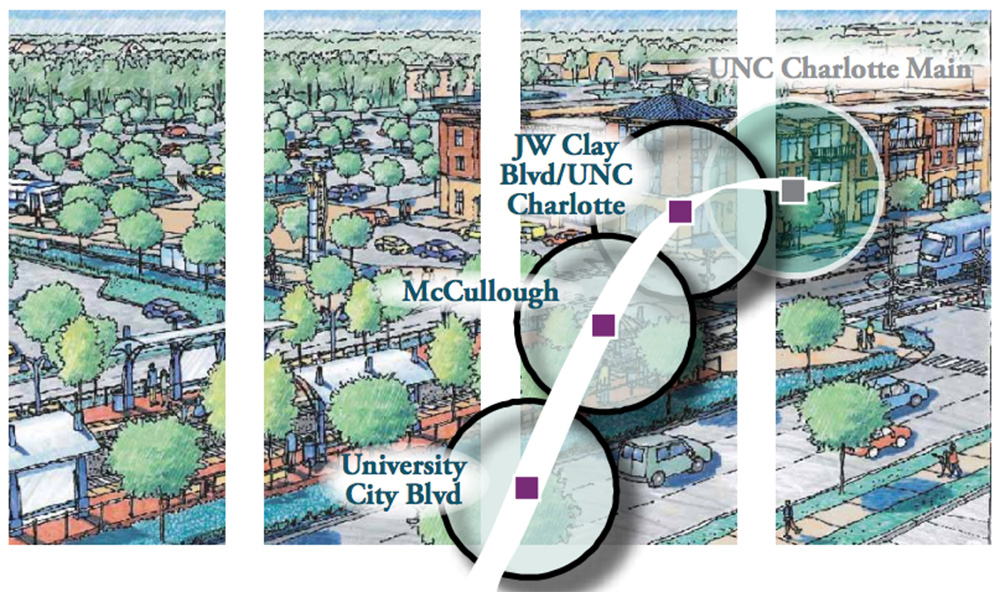 A rendering of the University City transit station areas.

Planning Department Director Ed McKinney said that an action item could be added to the UCAP's Implementation Plan to ask how proposed development plans would fit into the UCAP, so that incoming development requests could be evaluated for suitability in the area.

Mr. McKinney responded by recommending that approval of the UCAP and corrective re-zonings be considered as separate issues because Planning staff would need four to six months to evaluate individual parcels of land within 1/4 mile of transit stations and determine which parcels would be appropriate for re-zoning.

Council Member Howard responded: "I hope we address this immediately. Can I have a timetable when we vote on this?" Council Member Kenny Smith said that he is okay with a two-step process (approving the UCAP and then addressing the question of corrective re-zonings), but said, "Getting it on a timeline sooner rather than later is important."

Committee Chair Vi Lyles emphasized the need for the committee to "focus on making the best implementation (of the UCAP) in this area."

Council Members Greg Phipps and David Howard reiterated the need for "the next steps to happen expeditiously."

The committee voted unanimously to recommend that the full Council adopt the UCAP, and asked Planning staff to return with a timetable to review corrective re-zonings.

What's next for the University City Area Plan? It looks likely that it will be approved following the Transportation and Planning Committee's recommendation to City Council.

Sustain Charlotte spoke up in favor of supporting the UCAP, so we're glad to see Council Members and residents in agreement that University City should become a vibrant, people-oriented community. But we remain very concerned about the current lack of zoning to support that vision. As a city, we've made a substantial investment in the LYNX Blue Line Extension. Without corrective re-zonings, the UCAP is in danger of being disregarded as special interests plan development projects that aren't in the community's best long-term interest.

We will remain engaged in this issue with Planning staff and City Council to continue asking for corrective re-zonings on parcels of land within 1/4 mile of University City light rail stations.

The next Transportation and Planning Committee meeting is scheduled for 3:00 pm on Monday, May 11 in Room 280 of the Charlotte-Mecklenburg Government Center. Meetings are open to the public. Check the online schedule, since dates are subject to change. We realize that daytime meetings are hard for many people to attend, so we'll keep you posted!