You don't have to look at a map of the Charlotte area for long to figure out which neighborhoods were built before and after the time that ownership of cars became widespread. As the grid-based blocks of the 19th and early 20th centuries gave way to cul-de-sacs beginning in the 1950s, we rapidly lost the foundation of vibrant neighborhoods. We lost our connectivity.

Where are Charlotte's most walkable neighborhoods?

Just look to Uptown, Plaza Midwood, Dilworth, South End, Wesley Heights, and a handful of others near the city's core. What they have in common is short block distances and many, many choices for getting between any origin and destination. Charlotte and other cities across the country once built streets on a grid-like network: 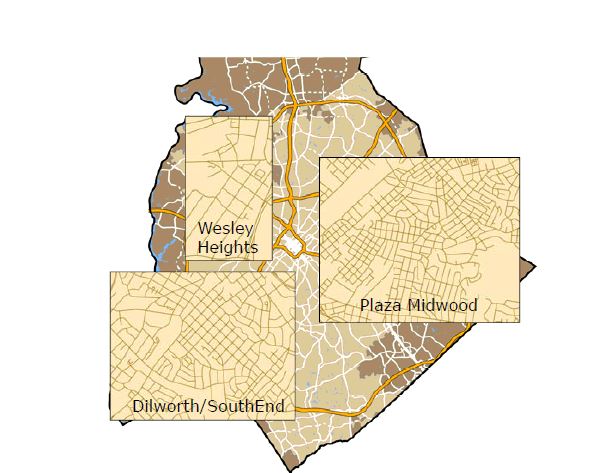 Our most walkable neighborhoods have excellent street connectivity.

This centuries-old practice of building cities block by block began to change after WWII with the rise of suburbanization, which was made possible by automobile ownership. Families were sold on the benefits of privacy and a sense of separation from neighbors. Cul-de-sacs became popular. Our street network became increasingly disconnected in the following decades. 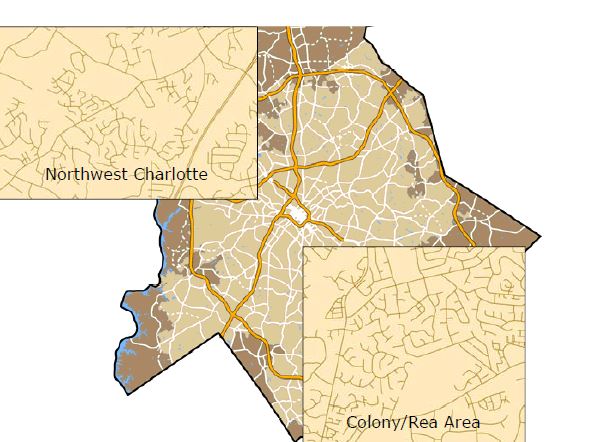 But the privacy that cul-de-sacs offered and the resulting fragmented street network came with major disadvantages. It's expensive and logistically difficult to serve residents with public transportation and emergency services when there's only one way in and out of the neighborhood. A short trip to the neighborhood school or grocery store in a neighborhood of connected blocks becomes much longer in a neighborhood of disjointed cul-de-sacs. This longer trip distance often leads residents to drive to nearby locations instead of walking or bicycling. That results in more cars on the road, more traffic congestion, more air pollution, and less safe conditions for all street users.

What if a connection had been ensured? 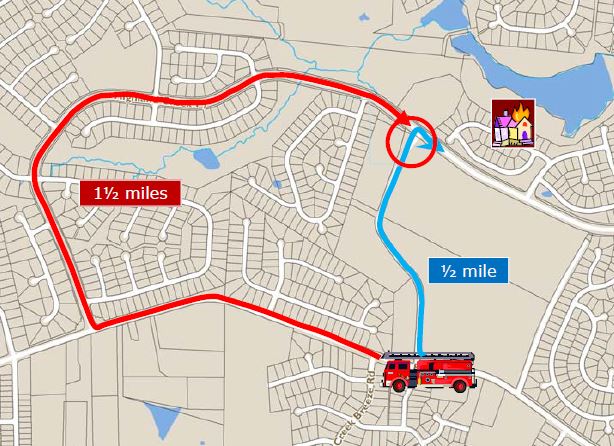 If your house was on fire, the extra mile would matter!

Well-connected streets support walking, bicycling, and riding transit to destinations within and beyond the neighborhood. If you're a motorist, a grid-based street network provides more potential routes to avoid congestion.

Given that Charlotte's boom in population growth and residential development happened after grid-based street networks fell out of fashion, how does our city regain lost connectivity so we can sustainably accommodate even more growth? Charlotte has adopted a number of policies and zoning ordinances to support better streets. Here's a brief history:

The Subdivision Ordinance is a powerful tool for enhancing connectivity. One of its key goals is to "Create a connected local street network". As neighborhoods grow, streets are extended from the edges of development into the site. 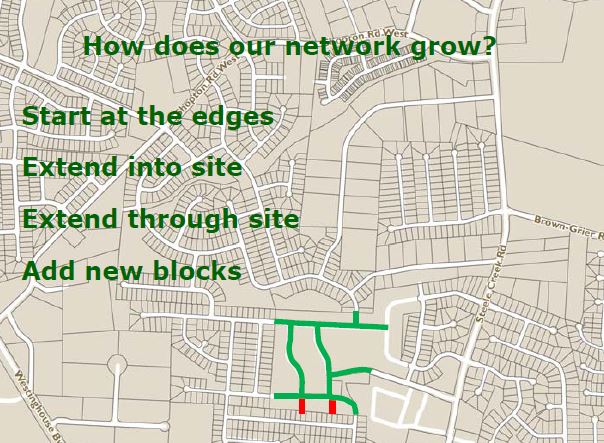 This process creates blocks where they didn't exist before. As you may imagine, residents aren't always thrilled when a quiet dead-end street that has been closed for years or decades becomes connected. Council member Kenny Smith (District 5) pointed out that opening street connections to improve connectivity can result in more vehicular traffic -- including speeding and inattentive driving -- that poses a safety threat to neighborhoods. We agree with his assessment that "in that kind of environment, connectivity has to be paired with traffic calming." Every street in Charlotte should be accessible and safe for all of its residents.

Although we don't think that building more streets on a large scale is the answer to Charlotte's congestion problem, it is important to repair past mistakes by re-connected fragmented neighborhoods if those connections will support better walkability, bikeability, transit access, and provision of emergency services.

CDOT's Director Danny Pleasant spoke about the "power of blocks" to offer route flexibility and travel choices. He explained that this happens quite naturally in Uptown since it's built on a grid, but it's more difficult to achieve in a suburban yet rapidly growing area like South Park. Though it won't be possible to re-build South Park on a full grid due to the location of existing developments, CDOT will work to instead create a "loose network" that offers better connectivity than the current street design.

Sustain Charlotte strongly supports the city's efforts to improve connectivity and improve on past decades of auto-dominated street network design! The city should have flexibility to evaluate whether to open or close a street connection, but that process needs to be objective and guided by the best interests of all street users.

City Council Transportation and Planning meetings are open to the public. Come sit with us! The committee typically meets on the 2nd and 4th Monday of each month at 2:00 p.m. in the Charlotte Mecklenburg Government Center, but the meetings are usually put on hold in July and August. View the meeting schedule here.