At Monday's City Council Transportation and Planning Committee meeting, members asked Planning Department staff a lot of questions about how the Unified Development Process is going.

Planning Director Taiwo Jaiyeoba, who has only been in his role for a few months, admitted that the UDO process is long, complicated, and overdue. He said, "Our ordinance and policy documents have not really been consistent." 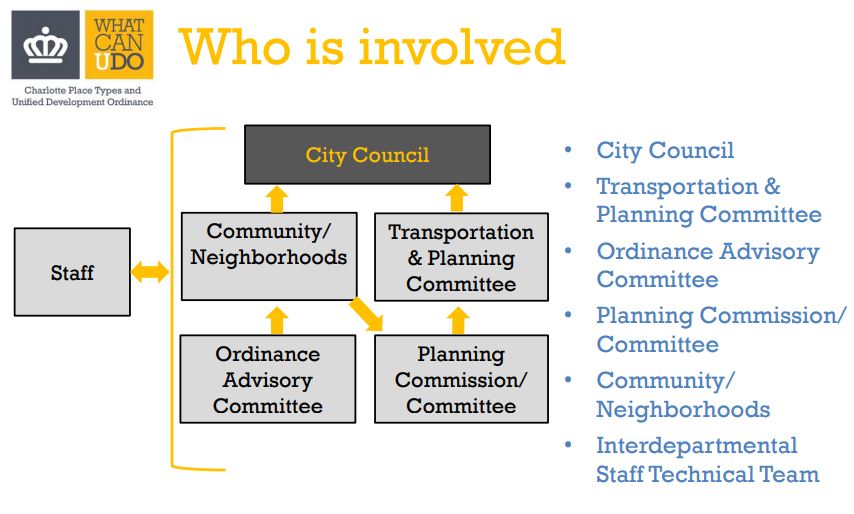 This slide from the meeting shows the relationships between various groups working on the UDO.

Committee Vice Chair Julie Eiselt asked, "Who decides what place types go where? That is what I'm still struggling with in regards to the vision. I need to see the visual of what Charlotte will look like."

Mr. Jaiyeoba responded, "We want to have the policies adopted before we map them."

But re-writing the city's zoning ordinance, including all the various outdated and contradictory ordinances it will replace, doesn't happen overnight. CM Eiselt expressed her concern that "We're giving up precious space" as conditional re-zonings are allowing development that's inconsistent with the city's vision to happen before the UDO is complete.

The Planning Director spoke candidly about the challenges of timing and the immensity of the project: "Staff has our work cut out for us...I'm the first to admit that we're doing this at the wrong time. It should have been done earlier." He went on to talk about Charlotte's peer cities of Nashville and Atlanta: [They} are way ahead of us in zoning, and they're also competitor cities."

We're pleased that Mr. Jaiyeoba responded favorably to Sustain Charlotte's comments about how long the UDO process is taking and the previous lack of a clear timeline. However, we also share some of the concerns raised by Council members at Monday's meeting, including the need for more detail about the work that Planning staff are doing and how it will support Charlotte's vision for growth.

Committee member Braxton Winston said, "We need to zoom out beyond the UDO and figure out how we can engage our communities in general about how the city was developed...People don't really understand how a city gets built out. We need to do a better job of educating our citizens on the basics of land use."

CM Winston also shared feedback from his constituents about how the UDO process needs to address and correct past errors: "This ordinance is taking on generations of past development ordinances that really had a history in the way that things have been done, not just in the city but the state and the nation. Some of the feedback that I got is that we have to identify that [the ways that] zoning ordinances have been made were intentionally, in some regards, meant to leave people out and come from a history of racism, a history of intentional inequities. If we don't acknowledge that --what we're working from, and what we're trying to stop and reverse-- we will spend a lot of time not really fixing the problem." 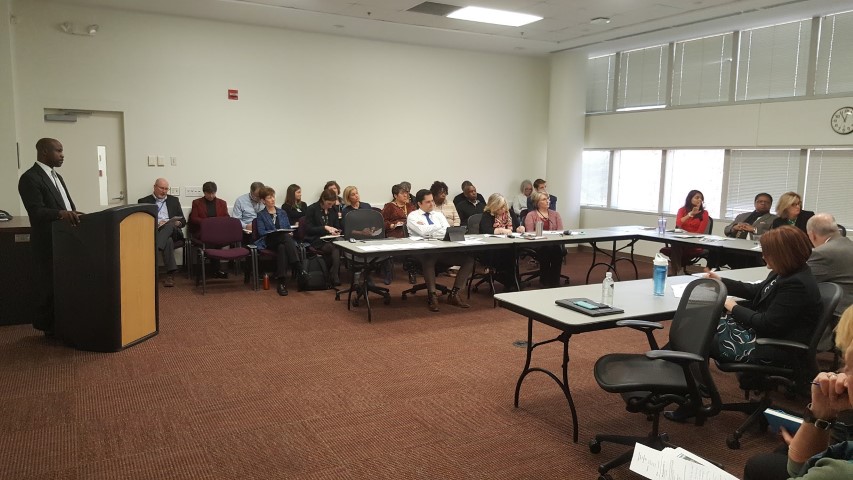 Monica Holmes from the Planning Department gave a presentation on the work being done to update the Transit Oriented Development (TOD) zoning districts. The focus at this meeting was on TOD-A, a zoning district that would support urban, highly walkable areas within 1/4 of fixed transit lines (ie, rail lines).

There will eventually be four TOD zoning districts: A, B, C, and D representing different intensities of uses and requirements. The goal is to adopt the rewritten TOD districts this fall. Between now and then, the Planning Department will seek feedback from the Planning Commission and Ordinance Advisory Committee, hold a May 1 South End public meeting, and a June public meeting for the Blue Line Extension followed by a summer text amendment and early fall review.

A draft of the TOD-A district is now posted, so check it out and submit your comments! Sustain Charlotte is preparing to submit comments on the draft TOD-A district. We'll share those with you as a blog post soon.