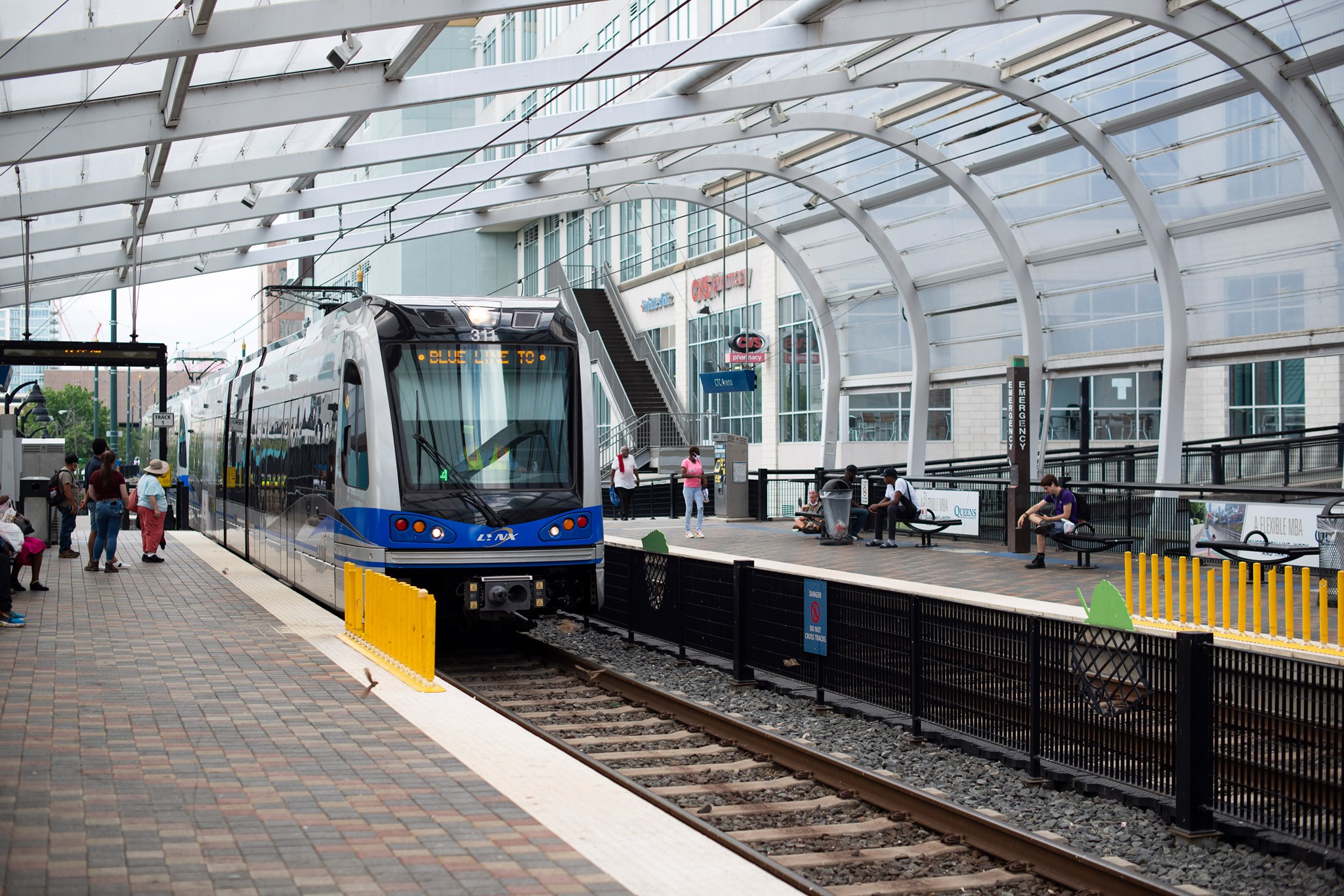 A new LYNX Blue Line station may be coming to South End. We’ll walk you through the history of the project and the options that have been discussed.

If you have ever taken the Blue Line light rail train going south from uptown, you’ve probably noticed that the distance between the center city and the station at East and West boulevards is relatively short. Going south from the East/West station down the line, however, the distance between stations increases with the increasing speed of the train. When the Blue Line was built, many of the areas adjacent to the tracks were predominantly industrial, so there was no perceived need to build stations there.

As time went by and more development started to pop up along the line, many industrial uses have been replaced by residential and retail developments, particularly in the areas between the East/West and New Bern stations.

On July 11, Charlotte city staff presented the Transportation and Planning Committee with a plan for a new Blue Line light rail station in the South End area.

More development in the area led to many people crossing the tracks unsafely by jumping over a small fence. In response to this, in 2017, the city conducted a South End bicycle/pedestrian connector study while also considering possibly building a station there instead.

At the time of the study, two major station options were considered. Both options are located within 200 feet of each other and would require the construction of a station with a similar design as other stations on the line right now, with two-sided platforms long enough to accommodate three-car trains.

Here are the pros and cons of both of the station options. 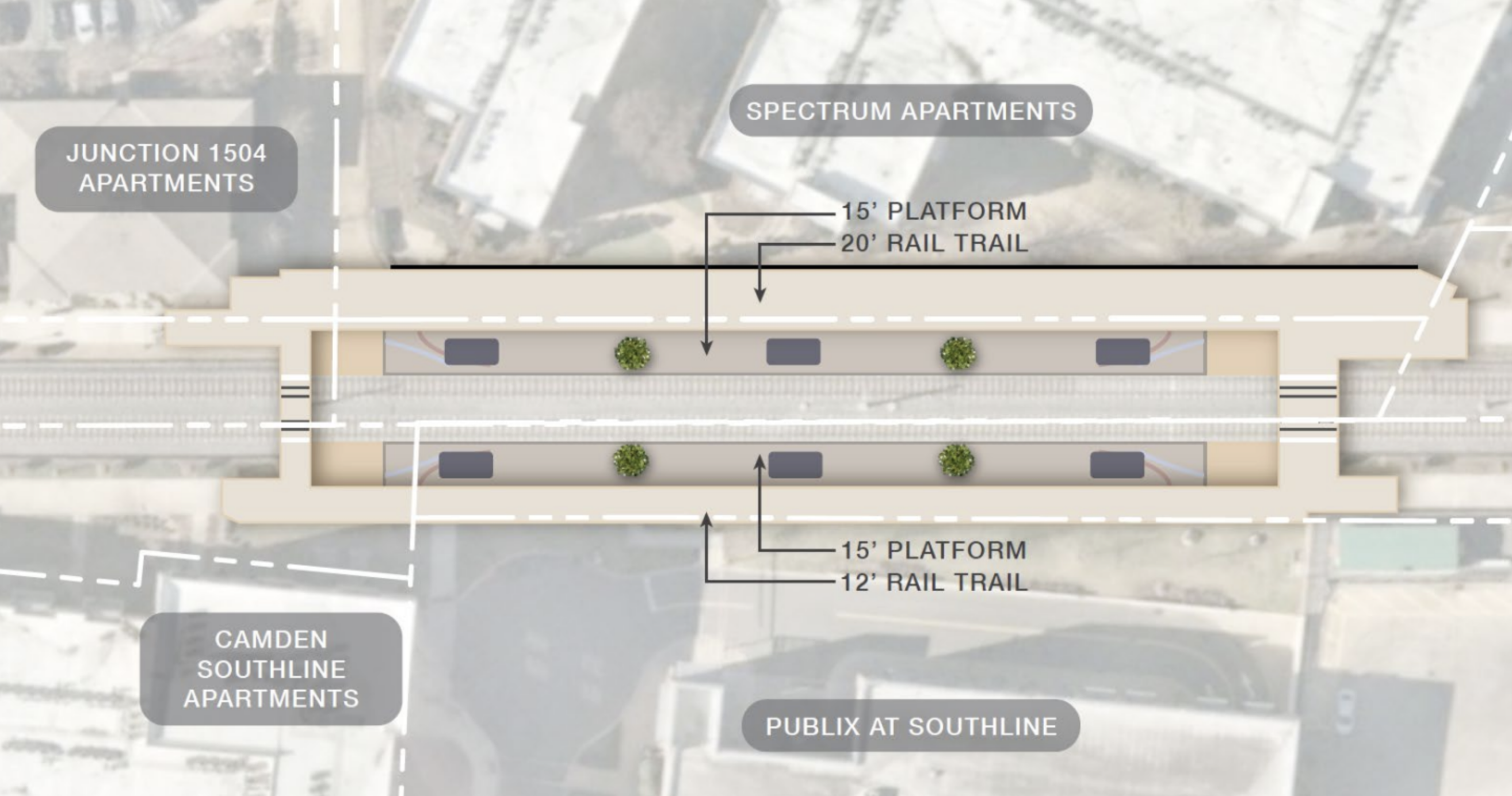 The project team also considered this alternative station option in the early stages of the 2017-18 study. However, as the city doesn’t typically build offset station platforms, it wasn’t considered in detail. The offset alternative is better than previously discussed options because the surrounding land is relatively flat on both sides of the station's platforms, so there will be no need to build any additional structures to connect the elevated platform to the rail trail (as would be required with the north option). It also allows for a better view of the station from South Boulevard, with a better opportunity to connect the station to the existing network of sidewalks. The construction cost would also be lower than the first two options.

Where we are now with the compromise plan for a new South End Blue Line station?

City staff has reached several stakeholders, including Charlotte Center City Partners, and received much support for this alternative option. The city will hold a virtual public meeting on Aug. 9 and an in-person meeting on Aug. 10. The city is also planning another stakeholder engagement session in early August. The Metropolitan Transit Commission will vote on this plan on Aug. 24.

The city staff team is working on project plans to finalize the planning process this summer and then proceed to the environmental impact assessment and project delivery evaluation this fall. Since the city doesn’t plan to stop the entire line operation during construction, the project delivery evaluation might take extra time to ensure all the safety protocols are in place and the disruption to the operating line is negated. After the design stage is complete, construction is expected to start in early 2025 and maybe even earlier, depending on the results of the project risks assessment. The construction is expected to be complete and the station operational by the end of 2026.

Who is paying for the new South End Blue Line station?

This project will be funded primarily by unspent Blue Line expansion funds. The project also has private funds coming from some of the developers.

The chair of the Transportation and Planning Committee, Charlotte City Council member Julie Eiselt, asked what would happen if the owner of the parking lot adjacent to the station sold the property. She also wondered if owners of the parking spots next to the stations are concerned if people taking the light rail would use their parking spaces as a free park-and-ride. Charlotte Area Transit System CEO John Lewis said the Atherton Lofts management is considering hiring a towing company to keep that lot for residents’ use. Also, some of the adjacent property owners, including Atherton Lofts, are concerned that the city will use parts of the property during construction. In fact, the city will have to take some of the spaces permanently after the construction is complete.

Council member Braxton Winson asked whether it’s possible to accelerate the timeline for building the station. Lewis said that if the city built a new line, that would be much easier and faster. But because it’s an infill station on an existing line, the process is more difficult and time-consuming. The city can’t and won’t shut down the entire corridor to build the station, which would result in a lengthier timeline.

Sustain Charlotte is excited to see that this project to add much-needed connectivity has reached the active planning stage! A new station in this area will provide safe access for residents on both sides of the tracks. It will also allow light rail riders to reach shopping, dining, and jobs more easily.

Photo at the top: Charlotte Area Transit System via Facebook