Big changes are in store for the Charlotte Transit Center. Here’s what to know 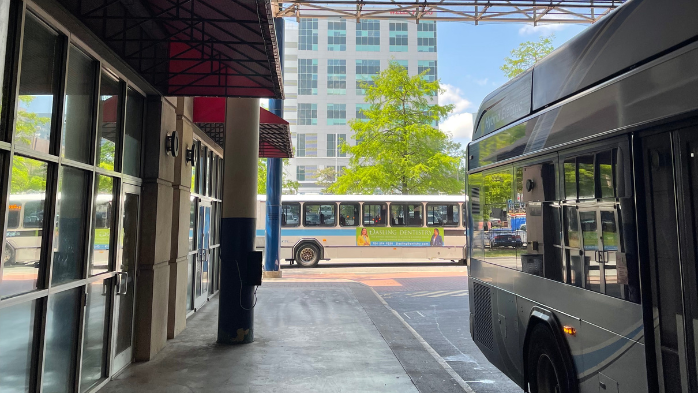 The Charlotte Transportation Center is getting a major makeover in the coming years. The uptown transit hub serves as a central bus station and has connections to the LYNX Blue Line light rail and CityLYNX Gold Line streetcar. Charlotte Area Transit System wants to overhaul the station to make it more modern. As of the latest plans, that means either putting the entire station underground or going with a two-story option.

Here’s what you need to know

The need for the transit center upgrade has been on the city’s agenda for quite some time. It was built in 1995, and CATS says it no longer meets the city's needs in 2022. The increase in Charlotte-area bus routes over the past few decades means more passengers are using a relatively small central bus station space. People are crossing bus lanes in a relatively small space, which creates an unsafe environment, as buses are constantly driving in and out of the facility. Plus, city plans called for the redevelopment of the “heart” of the regional transit network to accommodate population growth.

In response to those needs, the city has called for design proposals to redevelop the existing transit center. These are the criteria that the new transit center design would need to address:

At the monthly meeting of the Metropolitan Transit Commission on Oct. 26, CATS planning director Jason Lawrence gave an update on the ongoing public engagement efforts for the center’s redevelopment design.

Initially, the city considered three major design alternatives. One of the designs, which would have kept the transit center at street-level similar to how it is now, was scrapped. (It should be noted that currently, while bus access is street-level-only at the center, there is a small second-story area that serves to connect people to a LYNX Blue Line light rail station.) 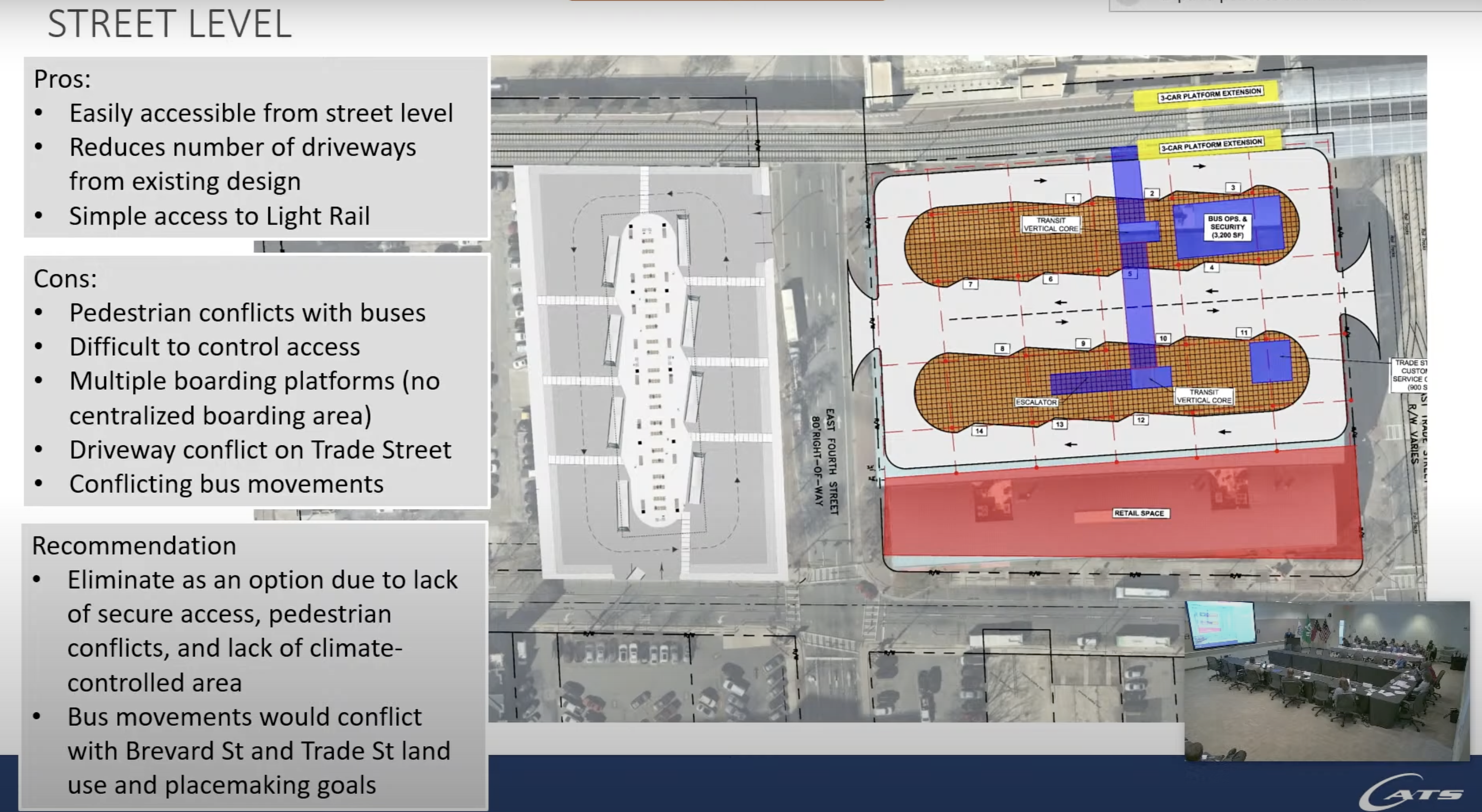 CATS decided to eliminate this option from consideration due to what staff said were conflicting bus movements, security, and the potential for bus-vs.-pedestrian incidents, among other issues.

That leaves two options on the table: a two-level “terrace”-style design and a one-level “concourse-level” design. Both still need to be studied further, Lawrence said. 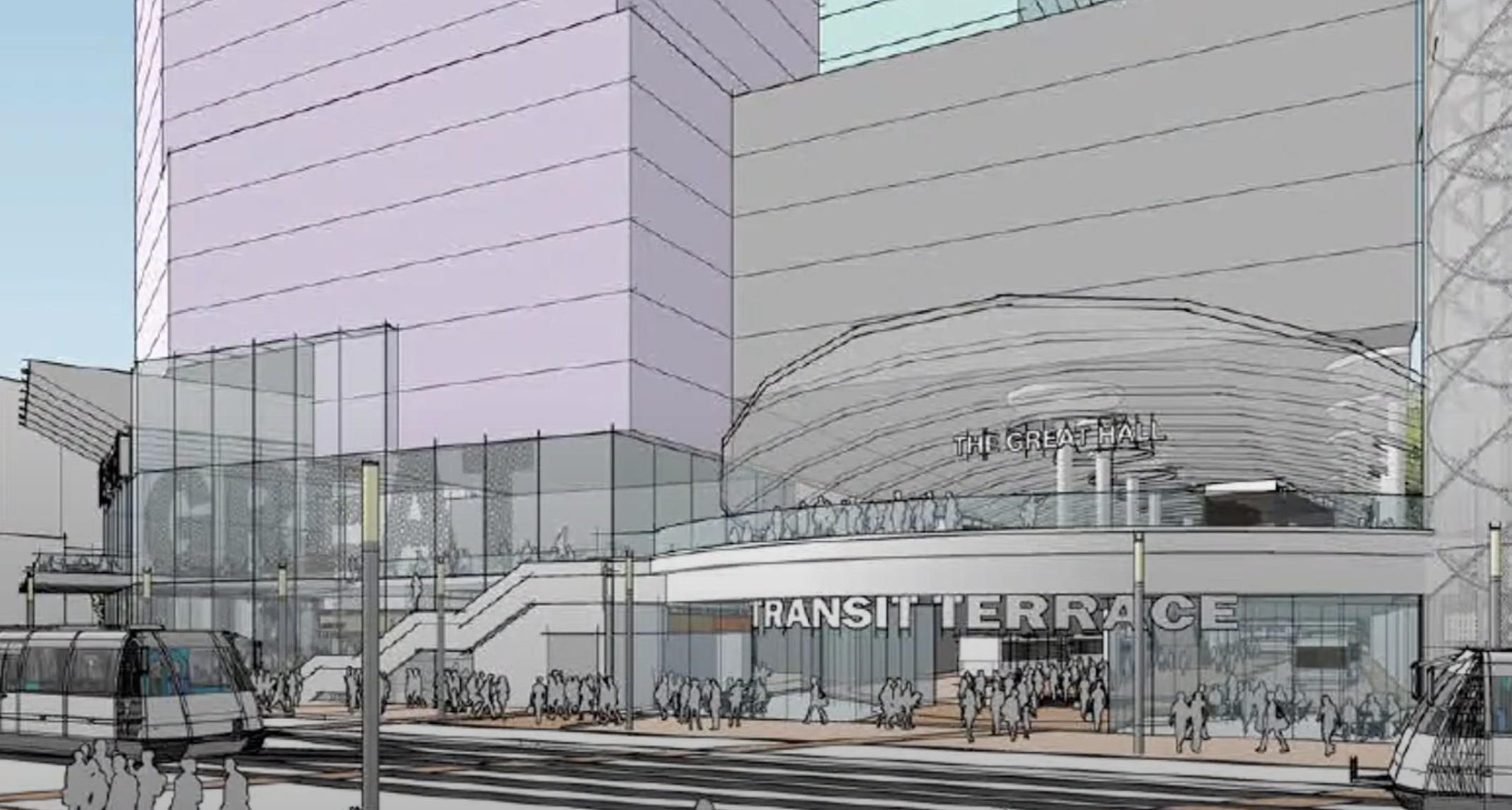 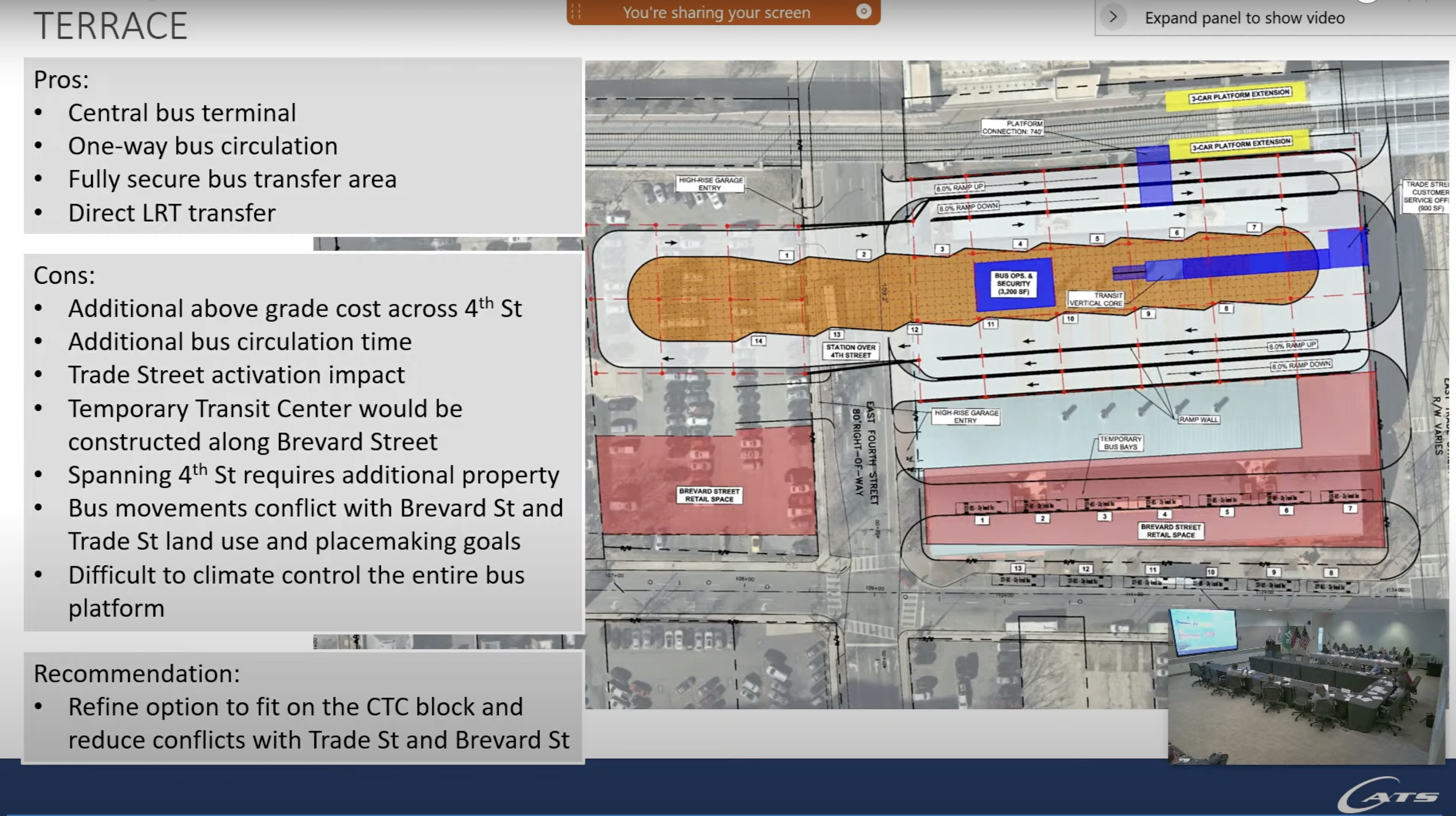 The “concourse level” option appears to be the most potential based on the initial evaluation, according to CATS. 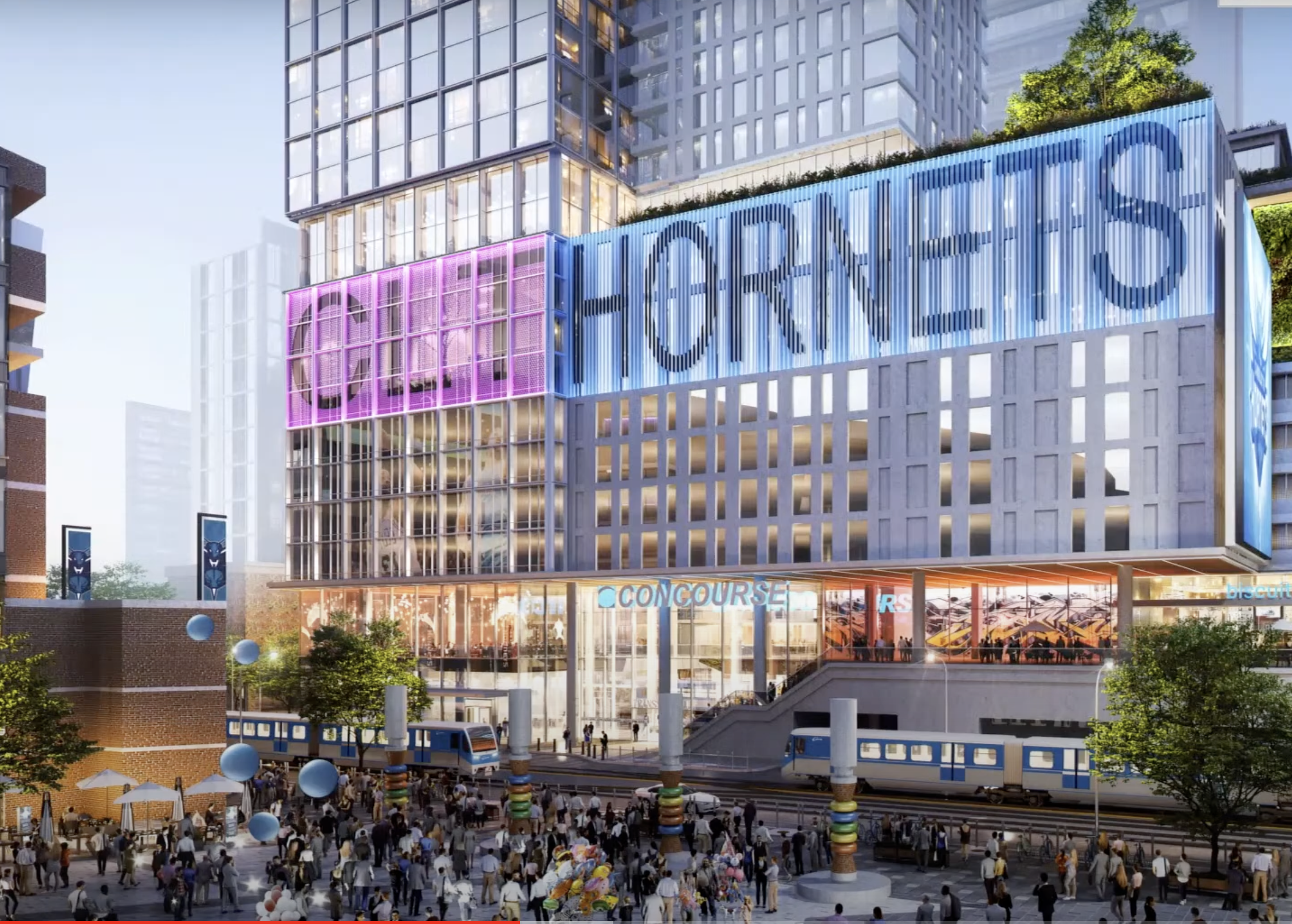 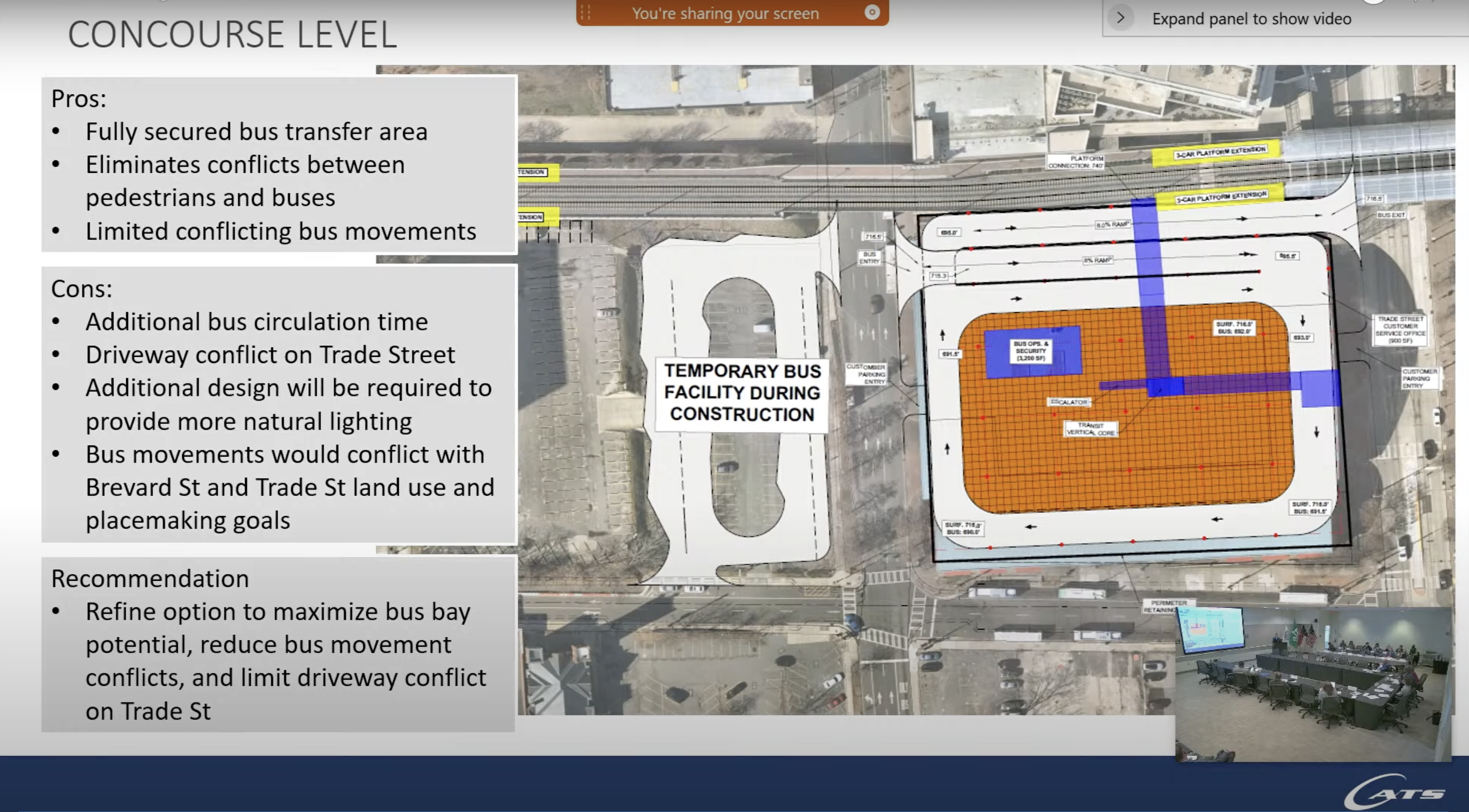 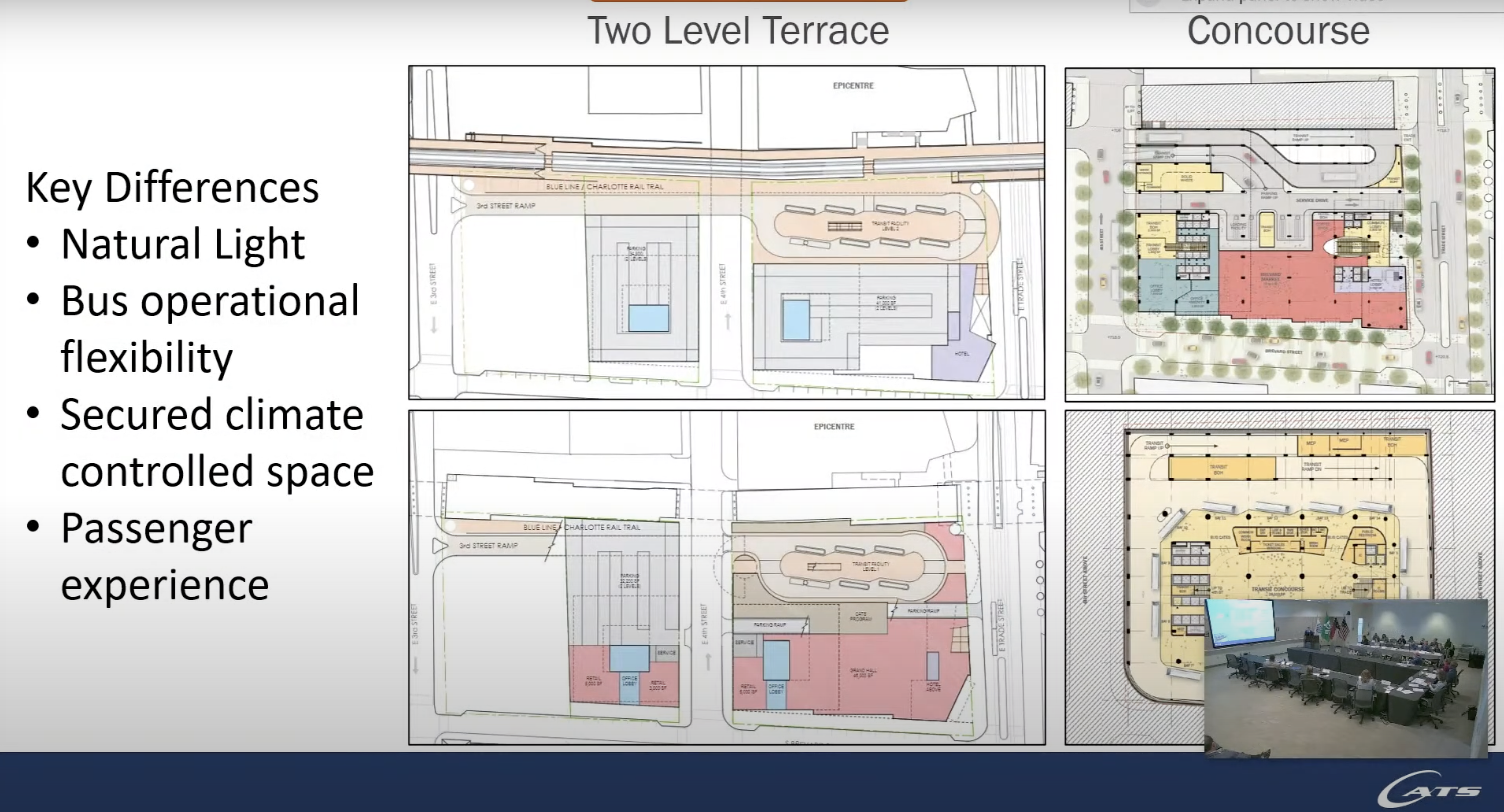 (Images were taken from the slides included in the agenda for the MTC meeting on Oct. 26.)

A new transportation center is slated to be operational in 2028. Construction on a temporary facility could begin as early as 2024. You can read more about the plans and recent developments in this Axios Charlotte article.

We understand that this project is an excellent opportunity to enhance economic development and create a safer, more vibrant pedestrian-oriented experience in the area. First and foremost, it's a transit project — and that should be the city’s priority in the design-consideration process. We want to make sure whatever option is picked provides a safe, comfortable, convenient, and dignified experience for public transportation users — especially bus riders.

To learn more about the Charlotte Transportation Center redevelopment plans:

As a nonprofit, community support is essential for us to keep doing what we do — including providing free articles like this. If you found this article helpful, please consider supporting Sustain Charlotte so we can continue advocating for a better future and working with residents, neighborhood organizations, government agencies, nonprofits, and businesses to solve the most critical challenges to Charlotte's long-term social, economic, and environmental health.