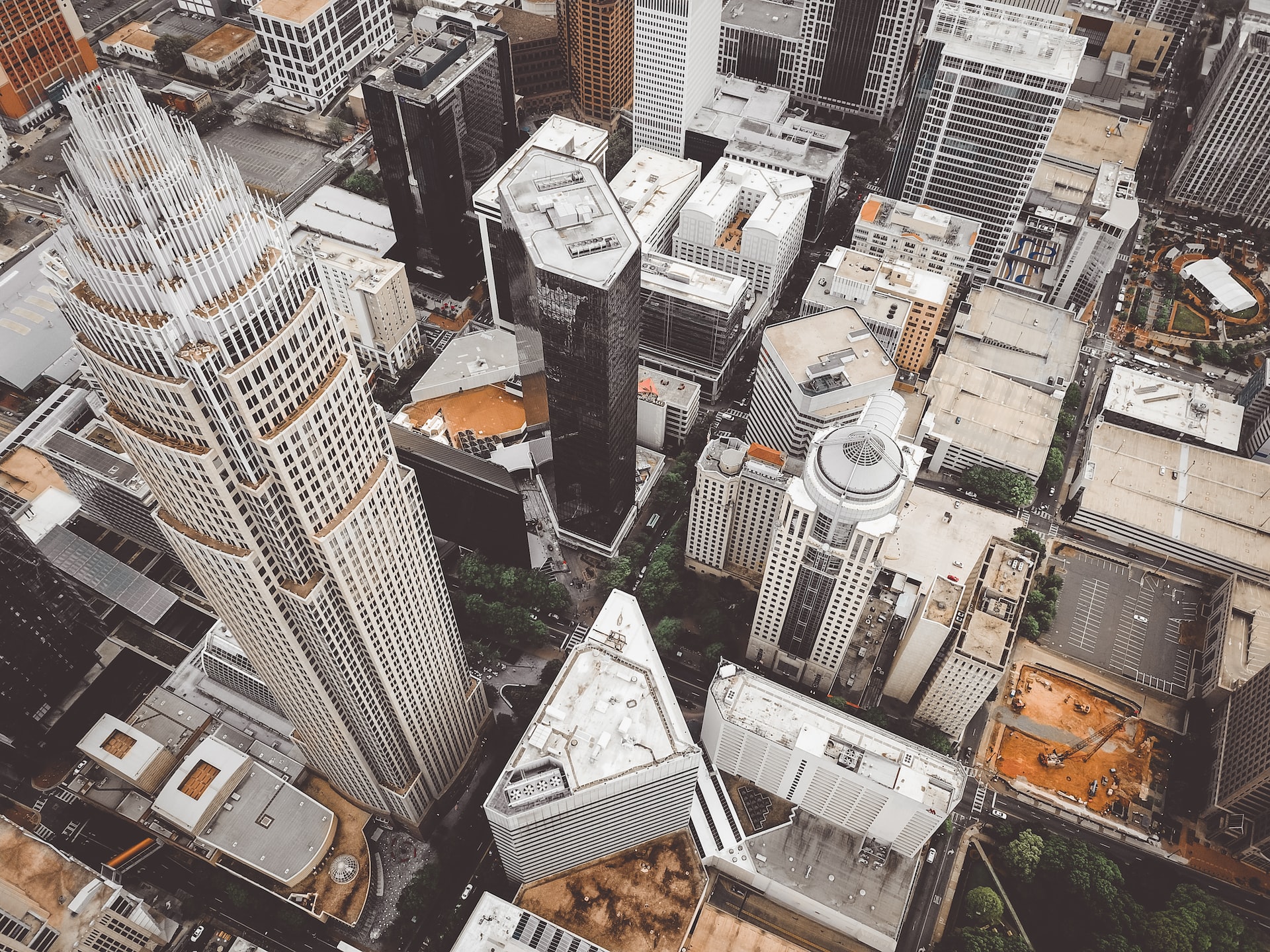 This is the fourth and final part in a series highlighting how the Strategic Mobility Plan could benefit Charlotte’s three E’s: the environment, equity, and economy. In this post, we’ll be covering how the plan could support Charlotte’s economy, cutting the costs of car dependence and boosting businesses.

The plan is designed to improve Charlotte’s public transportation system and make the city safer to navigate for people who walk, bike, and ride transit.

It also sets an ambitious 50-50 mode share goal — reducing the share of people driving to work alone to 50% by 2040 — and commits to Vision Zero, an effort to eliminate traffic deaths and severe injuries.

Be sure to catch up on the first three parts of this series, which cover how the Strategic Mobility Plan could reduce our greenhouse gas emissions, protect our air and water quality, and make our city more equitable.

Charlotte is a car-dependent city, with 76% percent of trips being made by people alone in their cars. But relying so much on driving could cost Charlotte’s economy a lot in the next 30 years if residents don't have other viable ways to commute.

Highway congestion might be seen as a sign that a region is growing, but too much traffic can actually slow job growth and economic productivity, as Politico reports. Longer commutes mean employees lose more time traveling to and from work, which can increase stress and commuting costs. According to a report from the Charlotte Regional Business Alliance, Charlotte could miss out on up to 126,100 jobs, $10.1 billion in wages, and $28 billion in economic outputs by 2050 if congestion goes unaddressed. 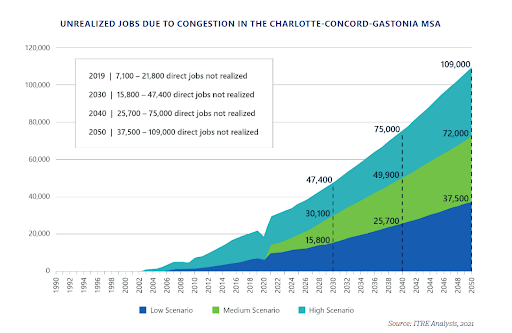 (Source: Economic Impacts of Mobility Investments in Mecklenburg County and the Benefits to the Charlotte Region.)

Continuing to be so car-dependent could also make Charlotte less attractive to larger businesses and the talent they need. Younger workers increasingly do not want to have long, congested drives to work, and are instead drawn to urban areas with high-quality public transportation, as NPR reported in 2018. As a result, more businesses want to be closer to reliable transit stations in order to access a broader labor pool with diverse and skilled workers. The Strategic Mobility Plan could help Charlotte be more competitive, bringing much-needed updates to our transit system.

On top of our current congestion, Charlotte is set to keep growing for the next 20 years, with 385,000 more people predicted to live here by 2040. That’s a lot of new drivers on our already busy streets. But building new highways — or widening existing ones — may not be enough to alleviate growing traffic and could actually do more harm than good, increasing the number of cars on the road, as reported by Smart Growth America.

This is due to a concept called induced demand, where increasing the supply of something also increases the number of people who want it. When we increase roadway capacity, more people are encouraged to drive, Bloomberg reported. While highway expansions may initially appear to ease traffic, new roads will eventually create new drivers, and congestion levels will rise to what they were before.

To accommodate new residents and just maintain current commute times, we need to reduce the number of trips made by cars. If combined with supporting development policy, the improvements laid out by the Strategic Mobility plan could help limit the number of people driving, increasing the percentage of trips made by walking, biking, or taking public transportation. The plan could also encourage denser and more efficient growth in the long run, which would make Charlotte easier to navigate without a car.

Driving so much comes with billions of dollars in hidden costs

In addition to long commutes slowing economic growth, being so dependent on cars also comes with other societal costs, including road maintenance, carbon emissions, and healthcare.

Cars have a large carbon footprint, emitting greenhouse gasses that contribute to climate change. On average, one car emits about 4.6 metric tons of carbon a year, and in 2020, passenger vehicles in the U.S. emitted 617 million tons of carbon total, according to the U.S. Environmental Protection Agency. But all of the CO2 coming out of our tailpipes is adding up. The social cost of carbon — which totals up all the economic impacts of climate change (including storm damage, air pollution, and lost agricultural productivity) — is about $51 a ton, according to Stanford. If we do the math, the social cost of auto emissions in the U.S. was about $31 billion in 2020 alone.

Driving so much also places costly health burdens on our city. Car accidents are one of the leading causes of death in the U.S., and over 1,500 people in North Carolina were killed in crashes in 2018, according to the Centers for Disease Control and Prevention. In addition to the immeasurable toll this loss takes on victims’ families and friends, traffic deaths resulted in $2.26 billion in medical, financial, and work loss costs for North Carolina in 2018.

Depending on cars also makes us less physically active, contributing to sedentary lifestyles that are bad for our health. According to a report from the American Public Health Association, obesity accounts for 9% of national healthcare spending. Factoring in healthcare and lost wages due to illness and premature death, the social cost of inactivity and obesity in the U.S. is about $142 billion.

Cars require much more public spending than biking or walking, largely due to the environmental, health, and infrastructure costs associated with driving. While driving costs society about 18 cents per mile, as outlined in a piece on Medium, biking generates about 32 cents, mostly due to the health benefits of being more active. Walking saves society even more, with the net benefit clocking in at around 69 cents a mile.

Building roads and expanding highways can cost tens of millions of dollars, as reported by Strong Towns. Biking and walking paths are less expensive. Building bicycle infrastructure creates 11.4 jobs for every $1 million spent, according to the AARP, while road projects produce about 7.8 jobs for that same amount.

On top of that, customer parking is expensive for businesses to create and maintain. Surface parking spots can cost between $5,000 to $10,000 to build, and garage spots a whopping $25,000 to $50,000 each, per Strong Towns. That’s a lot of overhead for small or local businesses, and excess parking takes up space that could be filled by other services and amenities. By passing the supporting development policy needed to build out the Strategic Mobility Plan, Charlotte could reduce or eliminate parking minimums, which would relieve businesses from providing parking they don’t need or can’t afford.

Public transportation is an important economic engine for Charlotte

Public transit is an especially important economic engine for busy cities like Charlotte, connecting residents to work and shopping, creating jobs, and often passing investments back to the local economy.

According to the American Public Transportation Association, half of all transit trips are made by people commuting to and from work. Of the remaining trips, most are to shopping and recreation centers, connecting transit riders with local businesses.

Nationally, public transit creates hundreds of thousands of jobs, from rail and bus operators to transportation analysts. In North Carolina alone, public transportation systems support 12,500 employees and $633 million dollars in wages, according to the State Department of Transportation.

Investment in public transportation also stimulates the national and local economy, with 70% of public funding flowing back into the private sector, according to the city of Charlotte. The supply chain for public transportation employs thousands of American workers, who produce everything from light rail tracks to the wheels on buses. By expanding Charlotte’s rail system and running more buses at new mobility hubs, the Strategic Mobility Plan could create many new transit-related jobs and better connect residents across Mecklenburg County to employment and shopping.

By making Charlotte easier to navigate without a car, the Strategic Mobility Plan could also save residents thousands of dollars every year and help them be more economically resilient to changes in car access.

From gas to insurance and repairs, car ownership is expensive, averaging over $8,000 a year, according to Forbes. Charlotte residents are especially burdened by expensive commutes, spending 22% of their income on transportation. Combined with high housing costs, it takes just over half of the average person’s paycheck to live in and move around Charlotte, according to the city. Being able to access efficient and reliable public transportation is crucial for the many families that struggle to or cannot afford to own a car. If households are able to take the bus or rail to work and live with one less car, they can save almost $10,000. Building safe and protected bike lanes is also important, as bikes help many residents commute without a car and cost a lot less to maintain, averaging only about $300 a year.

Suddenly losing car access can be a significant financial challenge for many families. Repairs can be costly, and Ubering everywhere may not be realistic for an extended period of time. So, imagine: If your car unexpectedly stopped working for several weeks, would you have another transportation option that could reliably get you to and from work on time, without putting your job in jeopardy? Would you have an affordable way to make all of your necessary trips?

Being able to walk, bike, or take public transportation to get where you need to go is something every Charlotte resident should be able to do. But right now, there are many households here that do not have reliable access to alternatives to driving, which is one more reason why fully implementing the Strategic Mobility Plan is important.

(Photo at the top by Clay Banks via Unsplash)

If you found this article interesting, consider signing up for our weekly email newsletter. It's 100% free and powered by our members and donors. As a nonprofit, support from the public helps us continue our advocacy to make Charlotte a more vibrant, healthy, and equitable city. Here's how you can learn more about supporting Sustain Charlotte.