Throughout the years Sustain Charlotte has voiced our support for the expansion of public transit. The implementation of a new light rail line connecting Mecklenburg County westward and eastward would be a crucial step towards a more equitable, sustainable, inclusive, and environmentally-friendly transportation system.

On January 26th, 2022 the Metropolitan Transit Commission (MTC) unanimously approved several changes to the Silver Line alignment that had been recommended by staff. The approved changes include two new stations, a station shift, and two alignment shifts.

The now-approved recommendations were made by CATS staff based on their analysis of months of public input that included outreach to residents and business owners in the communities along the future alignment. As a part of public outreach efforts over the Fall of 2021, CATS sent out over 42,000 mailers, had multiple social media posts, held multiple meetings with the community and stakeholders, sent multiple e-mail blasts, and planted 40+ yard signs.

The adopted refinements to the Locally Preferred Alternative (LPA) include five changes:

1) A shift of station from Suttle Avenue to Berryhill Road to improve access to the stations for the community in Wesley Heights;

2) A new station at Summit Avenue, as there is a market for future development around this location, particularly with regards to the former Charlotte Pipe & Foundry Co facilities;

4) An alignment shift eastward toward Fugate Avenue to better serve local residents, minimize possible negative impacts on the local hotels in the area, and provide cost-saving opportunities for the project;

5) An alignment shift out of the center of Monroe Road to preserve access to local small businesses, reduce costs of utility relocation, and reduce impacts on local properties.

You can see all five changes on the map below. 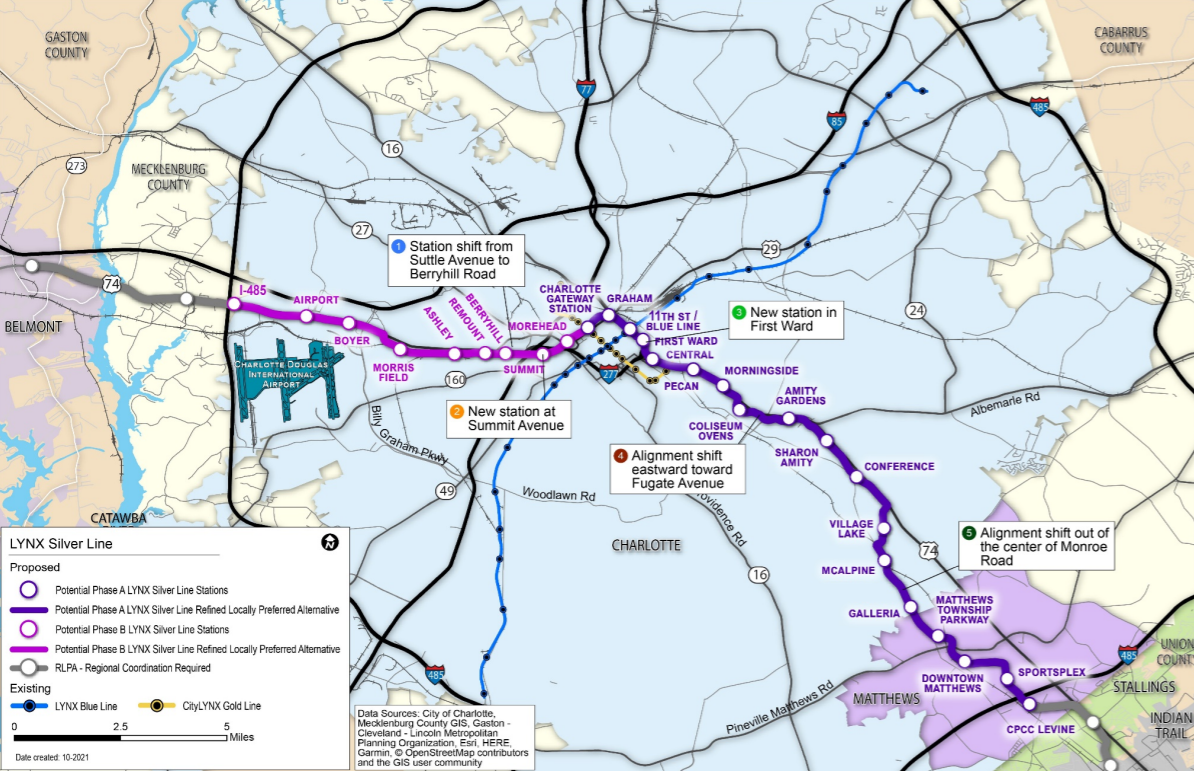 Map of the five approved changes to the Silver Line LPA (image: CATS)

How will the Silver Line be built? In phases.

CATS staff have suggested implementing the Silver Line project in three phasing stages. These include:

Phase B (West): Charlotte Gateway Station to I-485, including the airport

Other phases (Westward beyond I-485 outside of Mecklenburg County): This would depend on outside funding availability and regional agreements. Alternatives are also being considered at this point as well.

The map below illustrates parts of the future Silver Line light rail line and the respective phasing. 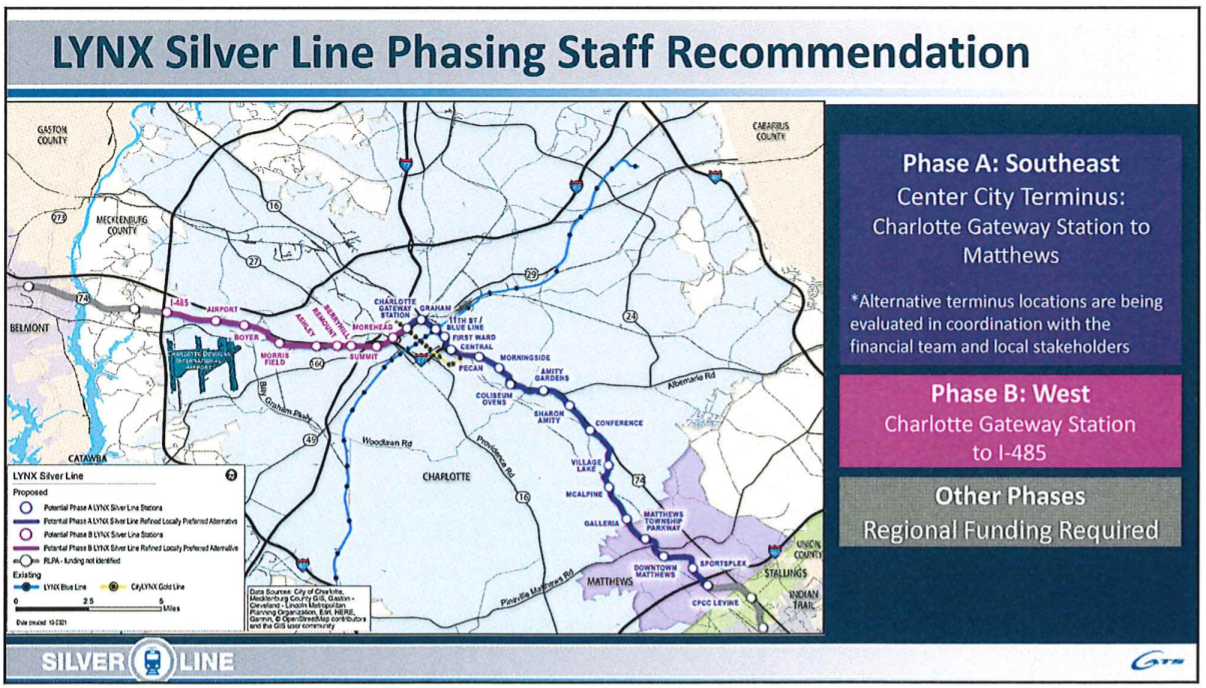 What will it take to actually build the Silver Line?

The planned Silver Line is a promising and impactful mobility project for all of Mecklenburg County and the region. However, it will require a stable funding source of both local and federal dollars across the various stages of construction. While the federal government supports cities through multiple grant programs designed to cover some of the costs of project implementation, those funds need to be supplemented with local funding.

We at Sustain Charlotte believe that adopting a One Cent For Mobility countywide sales tax would be a big step forward towards a more equitable and sustainable future. It would allow the Silver Line project to become competitive for federal funding. It would also provide funding for walking, biking, greenways, and a truly multimodal Transformational Mobility Network. If our elected officials wait too long to champion this local funding source, then we risk losing out on the opportunity for CATS to apply for unprecedented amounts of federal transit funding that have been made available with the passage of the Bipartisan Infrastructure Bill.

As mentioned at the MTC meeting, eventually extending the Silver Line westward beyond the boundary of Mecklenburg County into Gaston County will require additional regional funding.

We also want to note that when the MTC delegates' votes were taken to approve the alignment changes, the mayors of all three North Mecklenburg towns (Cornelius, Davidson, Huntersville) emphasized the importance of also focusing efforts on advancing the Red Line commuter rail project, which would provide service between Charlotte and the northern towns. We fully support their call for the Red Line to be built, too!