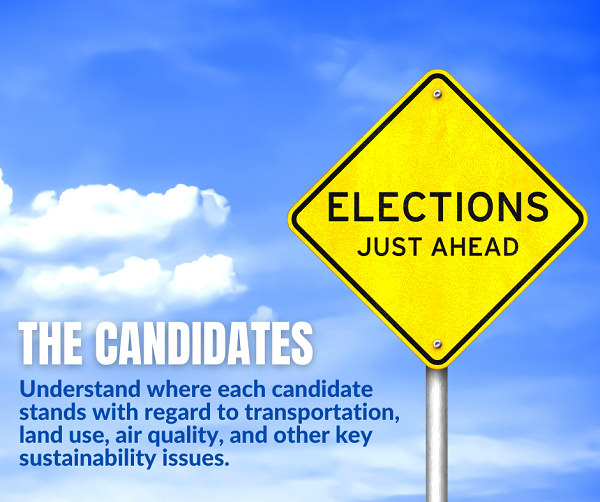 Update: On June 20th, 2022 we updated the responses in the survey to reflect the results of the Primaries. Responses from those candidates who did not move into the General Elections (July 2022 for Charlotte City Council and Mayor) and Mecklenburg Board of County Commissioners have been removed.

To help our followers better navigate the local election scene and understand where each candidate stands with regard to transportation, land use, air quality, and other key sustainability issues, Sustain Charlotte has distributed an online survey to all candidates that filed for office in Mecklenburg County for the upcoming primaries. Our survey was sent to all candidates running for the following elected bodies: Mecklenburg Board of County Commissioners, Charlotte City Council, and Mayor of Charlotte.

Questions were emailed to all candidates that filed their candidacy with Mecklenburg County, and who have provided their email addresses. Out of 55 response requests that we sent out, we have received (32) responses (via online form or emailed directly) that were returned before the stated deadline. Some candidates who submitted responses to our questionnaire are running uncontested, so their names will only appear on a ballot for the general election. We will edit the list accordingly later in the election season after the primaries cut off. (i) next to the candidate's name indicates incumbent.

We didn't make any alterations to the wording of the submitted responses, so the original spelling/grammar is preserved. We did edit the format of the responses so that the paragraphs appear uniform.

How to navigate the survey results

Each race (Charlotte City Council, Mecklenburg Board of County Commissioners, and Mayor of Charlotte) is covered on a separate page that includes responses from each candidate with their name/last name, their party affiliation, their incumbent status ("i" indicates an incumbent), and the office for which they are running. Districts are listed in numerical order. Within each district/at-large, candidates are listed in alphabetical order by their last name.  If you prefer not to scroll through the names of all candidates for a particular seat, you could do a search on the page (Ctrl+F) by the name of the candidate or the office (district/at-large)

Mecklenburg Board of County Commissioners

As a 501(c)3 organization, Sustain Charlotte does not endorse candidates. However, we have created this survey to share with voters the candidates' self-reported answers about where they stand on important sustainability issues.